(Having so many people take a stab at determining his game stats was made even odder by the fact that he serves as the detailed example of how to estimate a character’s stats in the Marvel Super-Heroes Advanced Role-Playing Game by TSR .)

This profile stops in the mid-2000s. The Initiative events and such aren’t integrated in the history, stats, characterisation, description, etc.

Captain Ultra has a bunch of ultra-powers in which he can pour his ultra-potential, allowing him to perform ultra-feats ! When his ultra-energy is not focused into some ultra-exploits, it defaults into ultra-augmenting his durability.

He’s also a mediocre stand-up comic, a passable plumber and fairly good with balloon animals. But he could use ultra-energy to do ultra-balloon animals or ultra-plumbing.

In DC Heroes RPG terms, he tends to keep his Hero Points  for ultra-LDD and ultra-altering the environment.

Captain Ultra was once reputed for his pyrophobia. But this has long since been cured.

When an elderly psychologist couldn’t afford to pay plumber Griffin Gogol, he offered to cure Gogol’s smoking habit via hypnosis. However, as Gogol later learned, the psychologist was an extraterrestrial. As a result, the hypnosis unlocked Gogol’s innate superhuman potential.

Donning an ultra-gaudy costume, Gogol became the superhero Captain Ultra. When the criminal Frightful Four advertised for a new fourth member, Ultra auditioned. He had presumably misunderstood the ad. They were impressed by his powers, but rejected him after he fainted at the sight of a lit match.

Captain Ultra was later among a small army of superheroes who joined the unofficial Defenders super-team. This came after Dollar Bill’s television documentary exposed the group’s existence.

During his day-long Defenders stint, Ultra :

When Hellcat defeated the villains with a blast that felled all her teammates as well, a fed-up Captain Ultra quit.

Captain Ultra relocated to Chicago, hoping to become famous there since there were no established super-heroes. When the thunder god Thor moved into town, an ultra-jealous Captain Ultra attacked him, and was defeated with ease.

After psychiatrist Doc Samson finally cured Ultra’s pyrophobia, Gogol returned to New York City. His plan was to make it big as a superhero and pursue his dream of becoming a standup comic.

His first standup routine at The Improb was interrupted by EkI’r, the Demon without Humor, who hoped to conquer Earth by stripping humanity of mirth. Captain Ultra literally slew the demon with ultra-comedy.

Later, when Plantman stole and animated Christmas trees as an environmental protest, Ultra brokered an ultra-compromise. People were allowed to keep their trees for the holidays, after which Plantman and Ultra fixed and replanted the trees at ultra-speed.

The mask covers his nose and looks slightly beak-like. His top is red with large yellow field that goes from the middle of his back, over his shoulders and down almost to his belt, overlapping the yellow field is a smaller black field and overlapping that, a smaller orange field. He also has green shoulder rings.

Gogol is a complete goober. He has big dreams of being a stand-up comic and model superhero, but those never really go anywhere. When he’s trying to act like a hero, he’s a cartoonish caricature, though he’s eager to do glorious deeds.

However, sometimes he acted like a complete, self-centred jerk and glory hound. His is… a particularly inconsistent characterisation.

A likely explanation was provided when it was revealed that Earth-616’s  Griffin Gogol was occasionally replaced by an impostor, the Earth-A  Griffin Gogol. Presumably the unpleasant appearances are the impostor’s.

“Have no fear, Frightful-Four-minus-one… ‘cause Captain Ultra is here ! You don’t like my costume ? I designed it myself — and I like colour.”

“By tapping into my ultra-potential, I can do anything better than anyone else. Let’s see what effect an ultra-joke will have on my friend… Hey, Ekl’r — did you hear the one about the two man-eating demons that went to the comedy club ? They split a gut !”

“No, no. That’s okay. No need to thank me for saving your lives. Selfless vigilance and the superhero go together like… uh… milk and cookies. Ta ta, duty calls.”

“Really ? I kind of felt I had them with my Tennessee Tuxedo imitation.”

“A weird light coming from Washington Square Park ! It doesn’t take ultra-brain power to deduce that gig or no — my stand-up comedy career takes a back seat to Captain Ultra, the superhero who can do anything better than you !”

(To a muck monster, whilst recovering consciousness) “Thank you Johnny… it’s really nice to be here… wherever here happens to be…”

Clearly, the only possible DCU History has Captain Ultra as an identity (and possibly alternate personality) of the Martian Manhunter. It was adopted when a White Martian attack damaged his mind.

To save himself, J’Onn latched on to lessons about humanity he learned from Billy Batson, a.k.a. Captain Marvel, including the flashy paramilitary identity, childlike innocence, and blue-collar work ethic.

Bonuses and Limitations:
Super-ventriloquism has an Area of Effect.

Drawbacks:
MIA toward being the center of attention, Innocent, Secret ID.

Helper(s): History is the one in Marvel A-Z 2006 with edits ; Roy Cowan. This entry incorporates ideas and numbers from a host of previous Captain Ultra writeups from Chad Riley (from whom I lifted the description), Bil, Paul Ewande, Jackson and Mister O. The DCU history in this version is by John Colagioia. 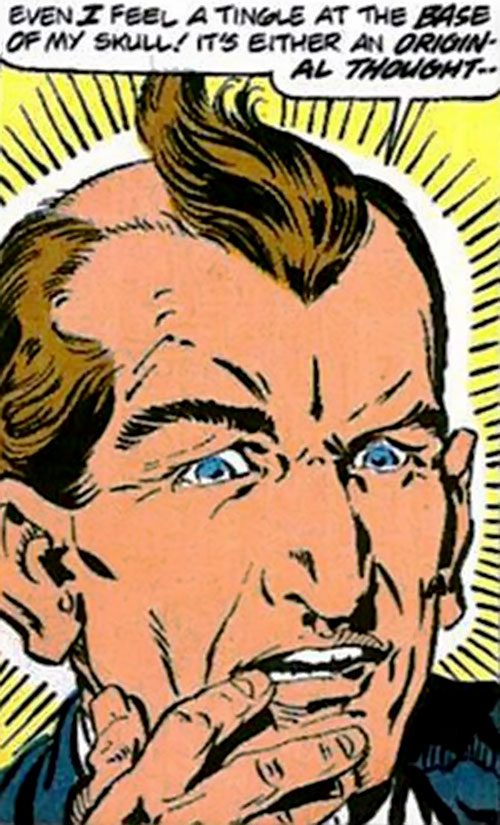 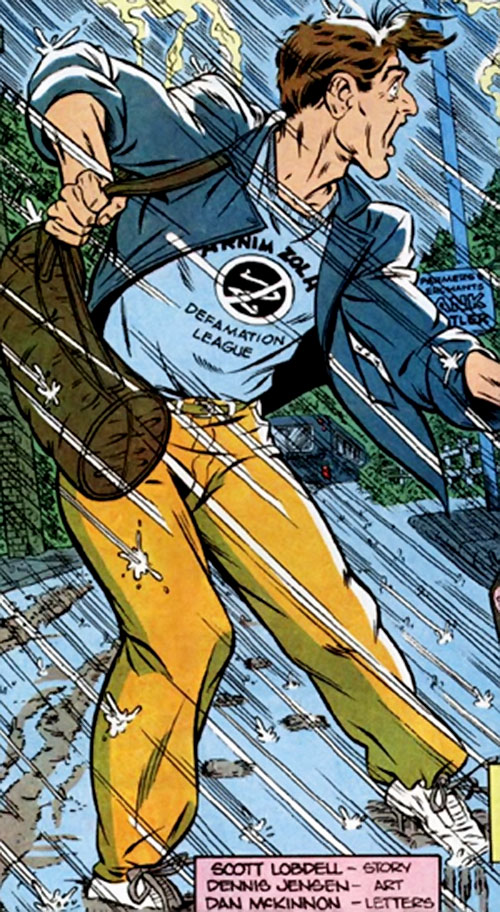