Carapax is an archaeologist of no particular repute.

He has significant experience with field trips under difficult conditions. He knows how to run those, handle firearms, do basic demolition, build shelter, etc..

He also demonstrated some technological skills, adding minor pieces of equipment to his robot body.

As the Indestructible Man, Carapax’s robot body is strong enough to lift a 6-man commercial fishing vessel. Or rip open a vanadium-steel hatchlock.

It is made of a virtually indestructible experimental ceramic polymer.

The forearms pack an unrevealed number of mini-missiles (Projectile weapon), often used for anti-aerial fire. But Carapax seems to prefer fighting up close.

The “indestructible” technology used for the Carapax robot comes from the work of Jarvis Kord and his nephew, Ted Kord.

Jarvis Kord was building an army of superhuman robot soldiers. He relied on the unwitting aid of his genius of a nephew to solve some tough technical issues.

Eventually, the older Kord faked his death. Then he built his robot army on the remote Pago Island, in the Atlantic. The vanguard of the robot corps would be a heavily armoured large red robot, just called the “indestructible super-robot” (no relation).

The younger Kord discovered that his uncle was up to no good and had made abusive use of his technological solutions. He contacted one of his college professors, reputed archaeologist Dan Garrett. Garrett agreed to help him investigate Pago Island.

Once they got there they realised that Jarvis’s plans were far more advanced and dangerous than previously thought. They were captured by the robot soldiers.

Garrett turned into the Blue Beetle. He started tearing through the robot troopers, eventually gaining the upper hand. To kill him, the older Kord triggered the self-destruction of his robot troopers, blowing much of the base up.

Dan Garrett and Jarvis Kord were seemingly killed in the conflagration. Listening to the last words of Garrett, Ted Kord swore to honour his legacy as the Blue Beetle, and to become the new Blue Beetle.

Garrett’s death had another result. A longtime rival of his, Conrad Carapax, reasoned that whatever had led Garrett to die on a lost island in the middle of the Atlantic must be important. 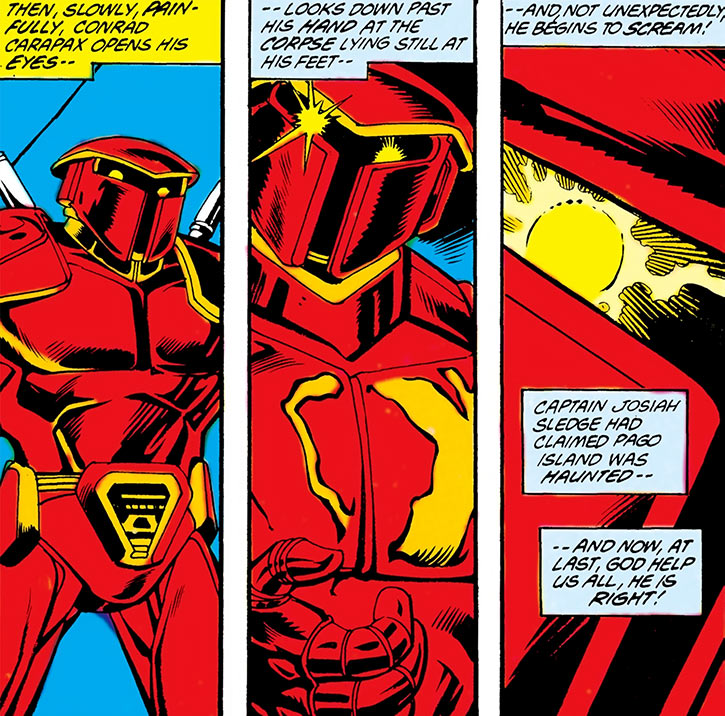 Carapax spent days scouring Pago Island without finding anything. However, he eventually heard a faint humming coming from the collapsed cave. This used to be the entrance for Jarvis Kord’s hidden base.

Carapax started digging with a mere pickaxe. Though that meant enormous amounts of work, he was bitterly determined to discover Garrett’s “secret find”.

He then blew open the jammed doors of Kord’s base, and discovered its content.

Ghost in the robot’s shell

Still obsessed by beating the deceased Garrett to whatever it is he had been investigating, Carapax studied the surviving high-tech equipment there. At one point he recklessly experimented with a sort of cybernetic helmet.

All he achieved was to kill himself.

His consciousness was ripped from his brain and beamed into the “Indestructible Robot” – Jarvis Kord’s most powerful creation and projected vanguard of his army. The robot had survived the destruction of the base unscathed. 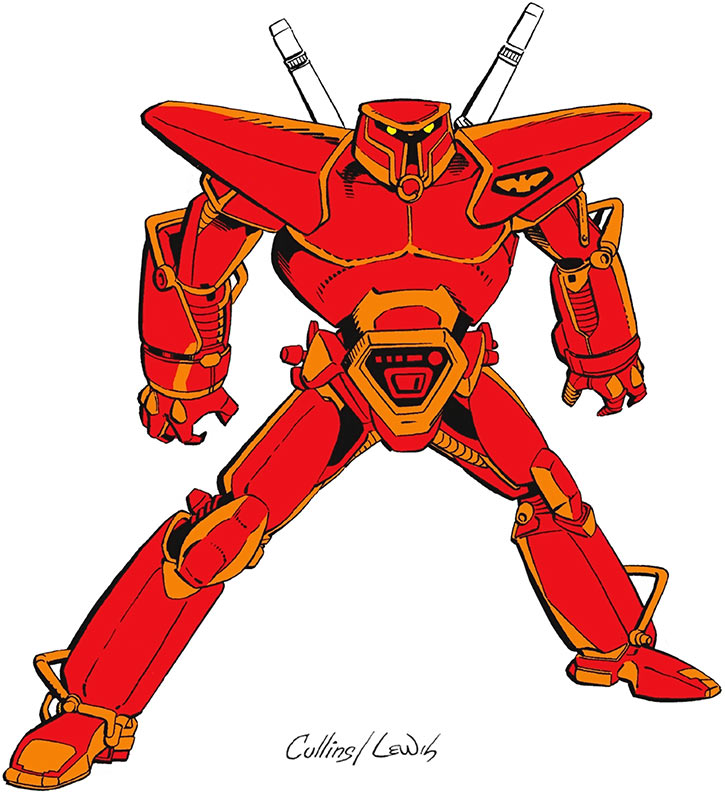 Now insane, Carapax murdered the sailors one by one. When the Blue Beetle (Ted Kord) reached Pago Island, only the detective and one sailor were still alive.

Kord and the survivors dodged Carapax’s attacks. They then used Blue Beetle’s Bug to destroy the boat. Their goal was to strand Carapax on the island. Suddenly realising what was going on, Carapax used an improvised grapnel to board the flying Bug.

The Beetle managed to throw Carapax overboard. The robot-man sunk like a stone. Before that, though, Carapax had managed to attach a tracer to the Bug.

Carapax simply walked West on the ocean floor, following the tracer. Weeks later he entered the Saint Lawrence, smashing through a seaway to keep walking.

Blue Beetle futilely engaged him. Carapax razed both the Beetle’s secret base and the Kord Technologies building.

Eventually, Ted Kord tricked Carapax into the Bug, sent the Bug away on autopilot and remotely detonated it. Somehow, Carapax did not emerge from the detonation.

Blue Beetle, having lost most everything, retired for a while.

Carapax was not seen again until 2006, fighting Superman and Firestorm. Firestorm turned half of Carapax’s “nervous system” into germanium. This greatly slowed down his thoughts and essentially made him comatose.

Attorneys from the Haake-Bruton corporation had him sprung. As a result, Carapax collaborated with the corporation to have a number of Indestructible Robots knock-offs built.

Those lesser copies fought a Waller-run version of the Suicide Squad. But at that point, Conrad Carapax had apparently already left the corporation.

After being projected into a robot body, Carapax was shocked into insanity. He stalked and killed people for no clear reason and behaving like a maddened predator. 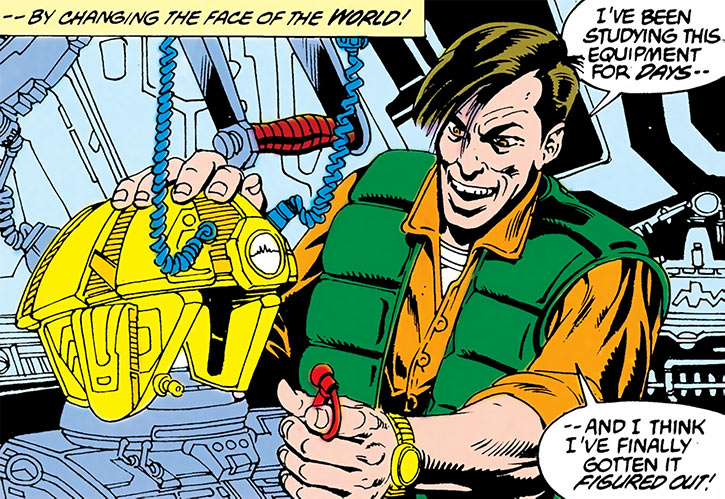 He could speak clearly, though, usually to yell about being a man and not a machine.

After his first encounter with Blue Beetle, he grew obsessed with destroying Kord. This made him a bit more focused, though still prone to explosive, murderous paranoia with no clear narrative. He assumed that anything he encountered was some sort of attempt to stop him, sent by some unspecified enemy.

In 2006 he seemed to be more of a generic bad guy and thug with some degree of technological savvy. What happened between the two is unrevealed.

“You tried to bury me alive, little man — but it is I who shall bury you !”

“Steel walls — laser beams — none of it makes any difference to me ! Conrad Carapax is no longer some insignificant little archaeologist to be overlooked and ignored ! Now I am the Indestructible Man !”

“I warned you back on Pago Island, little man – Carapax cannot be destroyed !”

Equipment:
Homing devices (x5) [BODY 01, Radio communications: 07, Miniaturisation: 06, Limitations: Radio coms only to emit a homing signal]. Those presumably can be shot from the forearms, much like the missiles.

The heat is on

In 2005, Carapax added a thermocouple converter to his exoplates – Energy absorption (Heat only): 02, feeding a Power Reserve (STR).

It is possible he added (or already had all along) further subsystems.

Over 2007, the Haake-Bruton corporation collaborated with Carapax to build a small army of Indestructible Robot knock-offs.

These seemed considerably less powerful than the original. One imagines that the technology was copied but cheaper materials were used to keep costs manageable.

It is possible they are piloted by human mentalities obtained via destructive copy, like Carapax. But it seems more likely they are run-of-the-mill robots. In any case they did not speak.

DEX 03 STR 12 BODY 12 is a possible set of Physical Attributes for these copies. They do not seem to have missiles or homing devices (or thermocouple converters).

Haake-Bruton had at least a score of those. 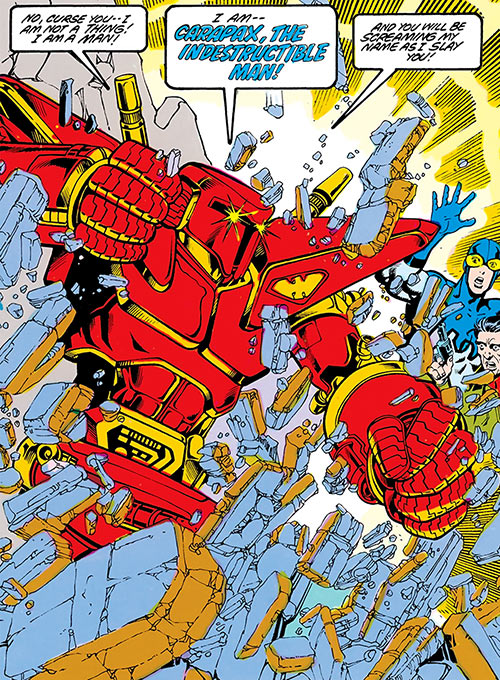 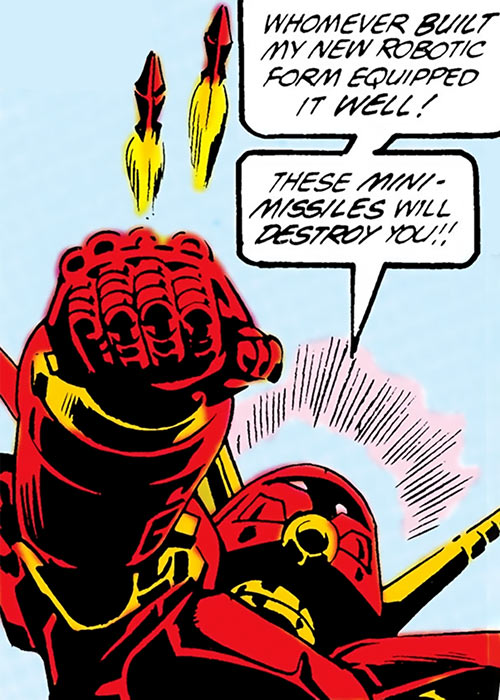 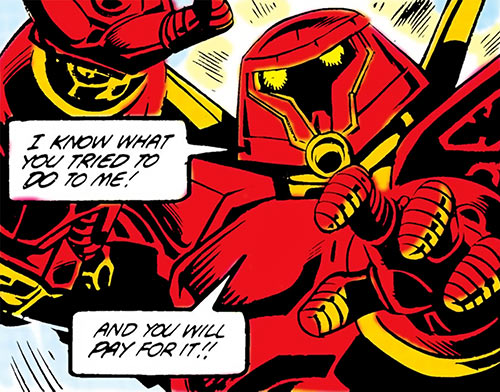