Carcharo is superhumanly fast, strong and tough – and has all sorts of shark-like abilities. He :

Although he appears to be clumsy and slow on land (sometimes to the point of having his Remoras help him walk), this is deceptive. He can actually fight such proficient and agile fighters as Nuklon or Mister Bones, even on dry land.

Carcharo fights offensively and has a lot of Hero Points  for such a minor character. In DC Heroes RPG terms, he will often enhance his AV and EV with HPs out of sheer ferocity.

His base is a super-submarine.

Carcharo has access to packs of prehistoric sharks – carcharodon megalodon . These are supposed to have been extinct for 40 million years… according to Carcharo in the 1980s. More recent research says that they might have been around as recently as 2M years ago. And of course in the DCU there are other documented contemporary megalodons, such as those around Themyscira.

Those colossal white sharks are described as being 40 feet long, but are drawn closer to being 20 meters long. A pack of sharks normally has 8-10 such monsters. Those creatures can easily sink a sizeable boat, and have been known to jump out of the water and destroy low-flying aircrafts. 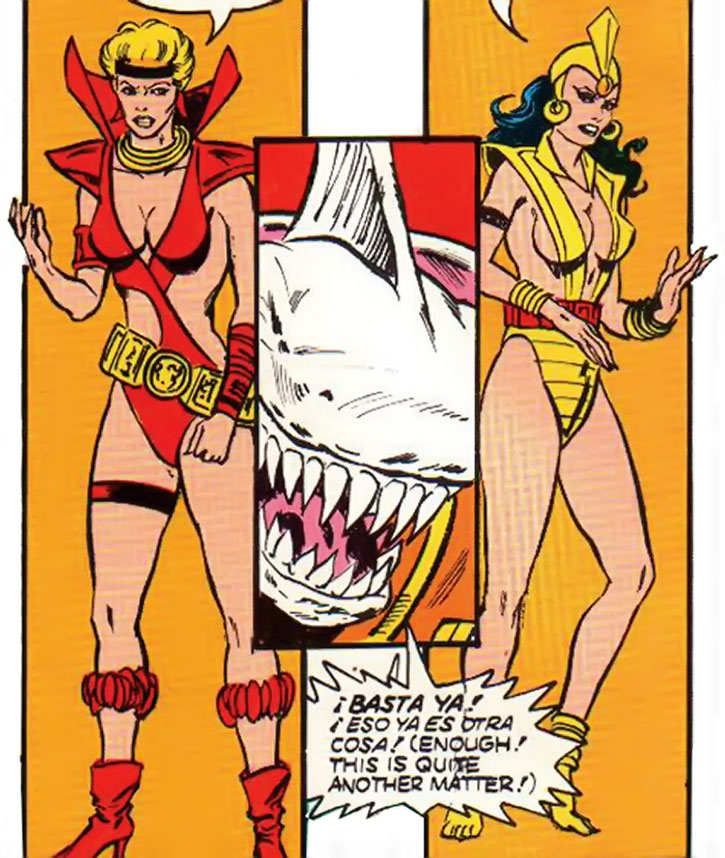 Carcharo also has two human assistants, Rema and Mora, whom he calls the Remoras. The Remoras are the crew of the submarine and his personal servants. It is implied they are too afraid of Carcharo to leave. He considers them to be entirely expendable.

Carcharo’s story starts with two Mexican sisters who moved to L.A., probably in the late 1950s or early 1960s. Both became pregnant at roughly the same time. They also shared a gynaecologist – Dr. Amos Love.

Love subjected both sisters (and several other patients) to his experimental drugs, resulting in babies with altered DNA. However, while one of the sisters received her visa, the other did not and they decided to both return in Mexico.

Thus, their children were born too far away for Love to monitor their birth along with the rest of his patients. The other children became the Helix mutants (Mister Bones, Penny Dreadful, Baby Boom, Kritter, Arak the Windwalker, and Tao Jones).

Once upon a time in Mexico

While one of the two kids. Yolanda Montez, was born looking human, the other, who would become Carcharo, was obviously not. His mother, seeing her baby as a monster, committed suicide by throwing herself into the sea while holding her kid. Nobody had noticed that the infant had gills, and he easily survived.

Much of Carcharo’s subsequent life is unrevealed, including how he learned surface languages, educated himself, obtained his submarine, etc.

The above story of Carcharo’s (and Montez’s) origin is not entirely reliable, though. Mister Bones, who recounted it, is not a particularly trustworthy person. Furthermore, Helix’s research (or Love’s notes) may include mistakes. Still, the story seems confirmed by Yolanda’s mother.

The temptation of the shark’s side

In any case, in the mid-1980s, Helix tracked down Carcharo. They told him the story of Dr. Love and his patients. They allied, and Carcharo came up with a plan to find the last known person of their kind. He laid his trap by very visibly attacking a large cruise ship with his monster sharks.

The plan worked. The young heroes of Infinity, Inc., included Yolanda Montez as Wildcat II, responded, and he captured her. Carcharo then took her to meet Helix, so they would also tell her about their shared origins.

However, Infinity, Inc. soon tracked Helix down. In the ensuing fight Wildcat II was freed and Helix’s leader, Mister Bones, was taken prisoner. Carcharo fled along with the rest of Helix. After a confrontation with Penny Dreadful, he took over the leadership of Helix.

Things quickly went sour, however. Penny Dreadful, Tao Jones and the Windwalker walked out. Bones escaped from custody and came back, but Carcharo knocked him out from behind. This triggered an attack from Kritter, whom Carcharo seemingly killed (though Kritter quickly recovered).

This in turn resulted in Baby Boom turning against Carcharo. However she could not do anything since he was holding the unconscious Bones hostage. Baby Boom doggedly followed Carcharo, waiting for an opening. Eventually, they ended up on Terminal Island, where the Infinitors and allied Helix members attacked.

The situation on Terminal Island resulted in a brutal duel to the death between two monsters – Carcharo and Mister Bones. Carcharo nearly won, but Baby Boon started slaughtering his sharks by detonating them. Mister Bones capitalised on the man-shark’s distraction by ramming an I-beam through Carcharo’s chest.

The shark-like mutate was too resilient to just die, however. Thus, he managed to bite off Bones’s leg.

The combination of the I-beam and the highly toxic limb of Bones finished Carcharo off. He appeared to die after taking a few step into the ocean.

Carcharo is a confident, brutal criminal and power seeker with many shark-like traits. For instance, he eats raw, unprepared fishes. He is not a thug, however. He seems to see himself as a sort of modern Captain Nemo, living by his own rule and well-educated. He usually speaks in 1980s comic book Spanglish, as per the quotes.

Carcharo is a brutal, treacherous fighter. He also is ruthlessly ambitious and controlling. He will do anything to achieve something once he has a taste of it, much like the smell of blood will drive sharks into a frenzy.

Everybody is thoroughly expendable to him – he’s always entirely and selfishly focused on his current goal. However, ne of his few weaknesses is that he seems to genuinely like his pet prehistoric sharks.

He can actually be a fairly good villain for a group of beginning heroes.

(About his megalodons) “I found them, and how and why they do my bidding is my concern.”

“¡ Dongase, gatita ! Besides filling the coastline with fear, they also just happened to deliver me the other thing I had come for… ¡ tu !“

“Yo soy Chicano. But we are both members of another race, as well. ¡ Mira !“

“No ! You little schizo-punk ! Leave my sharks alone !”

Drawbacks:
Serious Rage, Strange Appearance, MPR (his movement speed on land is but a 03).

It is entirely possible, but not demonstrated, that Carcharo has further shark-like abilities. You can refer to the giant shark stats in this writeup if you decide he should have more Chondrichthyes-style abilities.

Each has the following stats:

It is not clear whether Animal Control and Telepathy are Powers or are gained through technology – but Powers made more sense.

Note that I assume here that carcharodon megalodons are closely related to sharks, which is quite debatable in zoological terms. 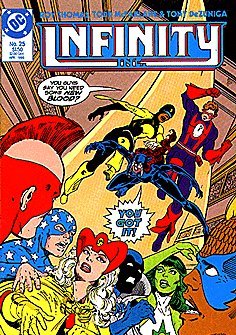 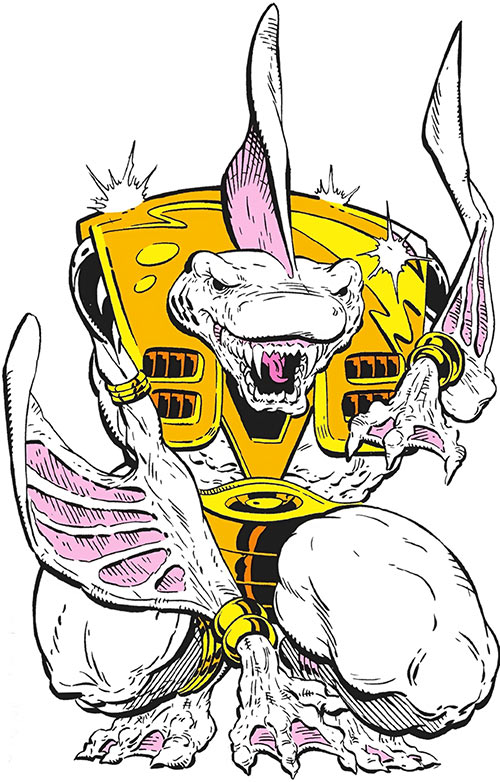 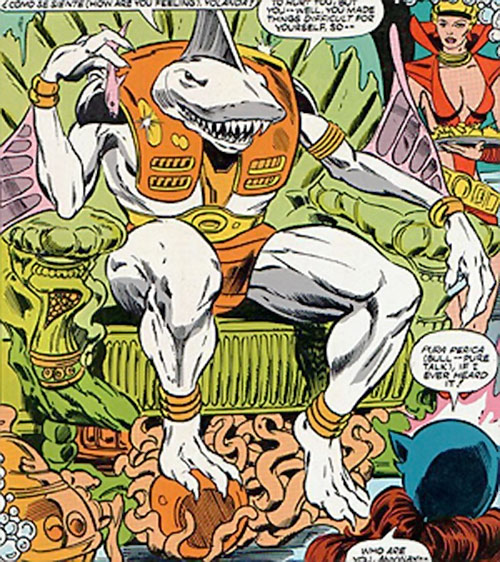