Paxton has apparently subjected himself to a variant of the process that created Cardiac. The full treatment would mean having :

In any event he is big and has about “Class 10” strength. On the other hand, he did not seem as fast and as mobile as Cardiac.

I suspect that he does not have a beta energy generator heart as Cardiac does, and that he has to be powered by outside beta energy. However he can store large quantities of beta energy, likely in his vibranium skin.

Paxton might be a competent industrial spy. It is unclear why he knows how to wield his piece of medieval weaponry. Perhaps he’s an SCA  enthusiast ?

Cardiaxe fights with a large, two-handed battle axe. It is wired with circuitry that can relay beta energy. Thus, he can energise his weapon much like Cardiac can pump his energy into his staff. The blows from the energised axe are devastating, and able to demolish practically any obstacle.

The axe also seems able to emit an energy wave to attack at a range. It’s not terribly clear.

Chris Paxton was an industrial spy. In 1994 he was working for Morelle Chemicals, a company whose unethical practices and taste for illegal enhancement projects led to several clashes with costumed crime fighters during the 1990s. Heroes who clashed with Morelle Chemicals included Spider-Man (Peter Parker), Cardiac, the Black Cat, and Nightwatch.

He was sent to infiltrate the corporation held by Dr. Eli Wirtham. This company was the largest healthcare company on the East Coast of the US, and a competitor of Morelle.

Paxton found the private, secret lab of Dr. Wirtham. In this lab, Wirtham had developed his special beta-energy based technology. This and his cybernetic technology had allowed Wirtham to become the vigilante Cardiac.

Driven far more by a lust for power than by loyalty or paycheques, Paxton hid his discovery from his employer. Instead, he somehow arranged to use the lab to turn him into a cyborg akin to Cardiac, although with different gear and much less training.

Seemingly missing a built-in beta particles generator, Cardiaxe had to charge up using the generators in the lab. But this browned out the entire Wirtham building. Which soon led to a confrontation with Nightwatch and Cardiac.

Cardiaxe’s big show of power did not go very far. Cardiac went ballistic at seeing that his identity had possibly been discovered and his technology abused. Thus, he overwhelmed and tried to kill Cardiaxe. Nightwatch saved the spy after Cardiac defenestrated him. Then the prompt arrival of the NYPD prevented Cardiac from making further attempts on Cardiaxe’s life.

The NYPD eventually made Paxton confess about his identity and his employer. This led Nightwatch to wage war with Morelle Chemicals, with Cardiac’s eventual assistance.

Cardiaxe was not seen again. His special axe was broken by Nightwatch during the fight in the Wirtham tower, and he apparently cannot power himself up without a beta generator.

He likely schemes to procure beta energy. But this technology is a personal and largely secret design of Wirtham, so it’s not looking good.

Cardiaxe’s costume is similar to Cardiac’s, but with a reversed colour scheme.

Once he became Cardiaxe, Paxton was downright cocky. He seemed drunk with the physical power he now wielded. I gather this was his lifelong dream, and that he was heady and overjoyed by having achieved it at last.

He would happily wreck obstacles, eliminate witnesses, shoot guards to distract his opponents, etc. as he went on his power trip and rampage. Cardiaxe seemed to have trouble seriously considering that he could be defeated or killed now that he had true power at last.

“Dead end, pest… no use hiding in the dark from Cardiaxe !”

Cardiaxe’s axe might be the distant ancestor of the atomic axe, as used by the Persuader, of the Fatal Five.

Skills:
Weaponry (His axe – both as a melee weapon and with Energy blast): 06

I have assumed, whenever there was a doubt, that Cardiaxe’s powers and abilities were similar to Cardiac’s. Thus a lot of the stats is derived from Cardiac’s. 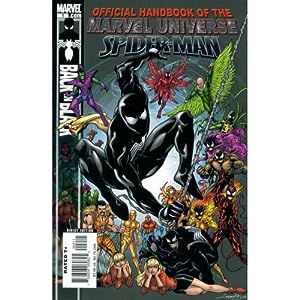 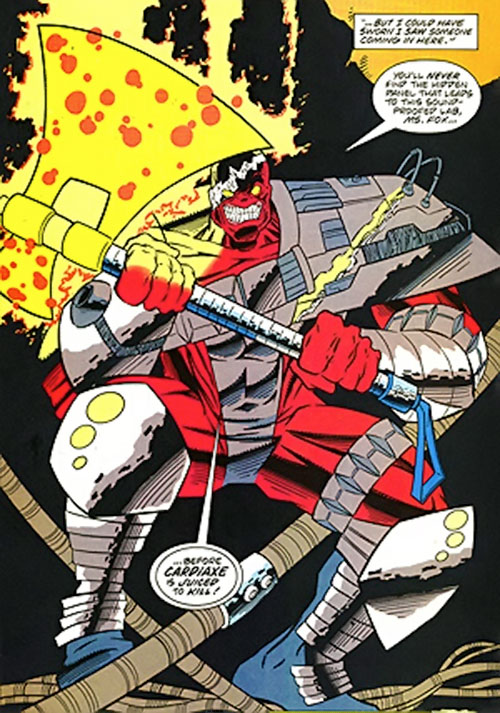