LeHah is a strong, heavy man. He doesn’t seem to have genuine training, but this mass and his killer instinct make him particularly dangerous in combat. It is possible that he benefits from “the system”, a peculiar mode of training invented by the Order of Saint Dumas.

He is a wealthy man, with extensive underworld connections. As a weapons dealer, he has extraordinary access to ordnance. He can easily procure comic book weaponry that could technically be built using real-world tech, but is over-the-top.

In particular he has access to impossibly efficient armour-piercing ammunition. For instance, the .45 ACP rounds for his sidearm could completely ignore ordinary body armour.

Lehah’s main strength is his madness and utter fanaticism. He’s certain that he’s in direct communication with a powerful demonic entity. Thus he’s utterly confident, kills without any hesitation and is convinced that he cannot be stopped.

LeHah’s subsequent appearances were far less impressive. This is what we call villain decay  in our smug, impenetrable jargon.

In 1996 he employed inept tactics and sub-optimal weapons. And in 1998 his threat profile was “big guy with solid hand-to-hand skills, and that’s it”.

The Order of Saint Dumas is a… distinctive offshoot of the historical Knight Templars. Seceding off the Knights before they were purged, the Order became an awful, evil little conspiracy. They chiefly worked on developing their power and wealth.

But their treasurer, Carleton LeHah, suddenly and inevitably betrayed them  (video). He absconded with the Order’s money, and invested it in a shady arms dealing business. 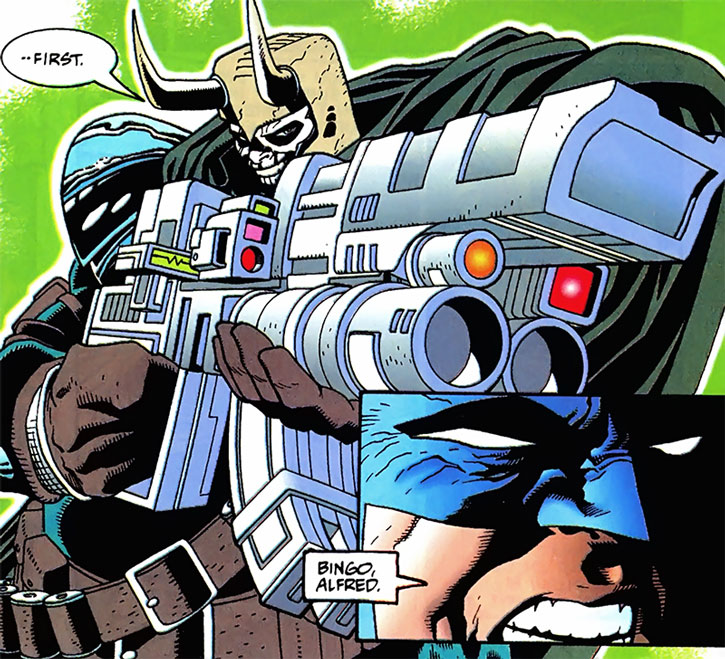 The Order sent in their enforcer – the “angel” Azrael (Ludovic Valley). But Azrael’s first attempts failed. His third try was to attack the cable car LeHah was riding high in the Swiss Alps, and severing the cable.

But that only killed a decoy, and now LeHah knew that Azrael was after him. And he was entirely aware that Azrael was but a bloke with body armour and a burning sword. Thus, when the enforcer came, Lehah fatally shot him using the latest in armour-piercing ammunition.

However, Azrael did land a strike, taking out LeHah’s right eye.

After he recovered, LeHah procured a few super-rockets. Then he blew up a Swiss chalet used by Azrael’s handler. However, this triggered an avalanche. LeHah and his pilot ran to their helicopter and tried to get clear. Albeit they seemed doomed, they miraculously survived.

During the incident, LeHah started seeing a face in random patterns. He also began to hear a voice in his head. He thought that it was the demon Biis, a Satanic figure in the Order’s peculiar Christianity. Experiencing an epiphany, he murdered his pilot. Then he carved out the man’s heart as his first offering to Biis.

After trekking back to civilisation, LeHah rearmed. He also started wearing an horrible costume and facepaint. He became a sort of knight serving the demon lord he heard in his head. His first order was to hunt the other full members of the Order. That meant a dozen persons, as this conspiracy had shrunk over the centuries.

Most members were unaware of LeHah’s betrayal. He thus started murdering them one by one, slaughtering anybody who was vaguely in his path.

During the first such strike, LeHah captured Batman (Bruce Wayne). Wayne had been investigating him and the Order. Carleton thus learned that Wayne was Batman. But he kept him alive until he could find a way to gain control of the Wayne fortune.

In the meanwhile, LeHah murdered more Order members. In order to sow confusion, he wore his stolen Batman costume.

All the while, Batman resisted torture. He then said that the bat-costume was the symbol of another demon, and that by wearing it LeHah was being sacrilegious. These mind games landed for a bit, then backfired. But Wayne was rescued in the nick of time by the new Azrael (Jean-Paul Valley), and LeHah disappeared in an enormous explosion.

The arms dealer actually survived. But he was badly burned, and shrapnel-induced brain damage had caused partial memory loss. However, once Biis resumed talking to him, LeHah regained much of his memory.

(Out of universe, the shrapnel thing is presumably so that LeHah would not remember Batman’s identity.)

In 1996, LeHah sent a hit squad who captured Azrael using knockout foam. LeHah then attempted to kill Valley using a prototype M.A.C. combat mecha, then through physical confrontation. This completely failed. LeHah seemed to be expecting the same sort of Azrael he had killed, but his foe was far more powerful than that.

Being easily defeated and having his demonic costume destroyed seemingly broke the connection between LeHah and Biis. His men deserted him, and the arms dealer remained alone and drinking to deal with the shock.

Three killers from the Order of St. Dumas soon came in, and encountered no resistance. They actually were after Azrael, and LeHah agreed to take them to him. But they made the same mistake than he had, and were defeated within seconds. LeHah fled.

In 2002, Sister Lilhy attempted to kill Azrael to reassert control over the Order. After poison failed, she hired LeHah. This attempt was a dismal failure. LeHah was trivial to beat, and was easily forced to join the mass Azrael cult headed by Killigan O’Mara.

Over the following months, the cult grew. O’Mara had Nicholas Scratch pose as Azrael, since Jean-Paul Valley had left.

Unaware of this, Lilhy contacted LeHah again for a straightforward assassination. She had arranged for access during a public event. This would allow LeHah to simply walk in and gun Azrael down as he was giving his speech. She gave him a gun with armour-piercing bullets – looking vaguely like a rechambered Steyr TMP.

As LeHah was aiming, Valley barged in to denounce the false Azrael. However, he spotted LeHah and rushed him. That allowed the assassin to shoot Valley multiple times, since he couldn’t dodge. They crashed through railing and into a river. Albeit injured, LeHah survived and was arrested.

Azrael’s bullet-ridden uniform was found, but Valley was nowhere to be seen. It thus appears that LeHah did kill Valley, at least until Flashpoint.

LeHah sometimes speaks in an altered, supernatural-sounding voice. Of course, it’d be trivial to do with a vocoder. Implanted if need be, since he’s crazy.

After his 1996 defeat (which took place in a cold storage room), LeHah came to constantly feel cold. He’ll thus usually be swaddled in a big coat and a hat, even in swimsuit weather. That’s above his Biis costume, which he now insists upon wearing at all times.

LeHah is a demented fanatic who allegedly has a direct line to the devil, or something close to it. Biis speaks directly to him, and only him can hear Biis. Biis can give him glorious visions, apparently supernatural insights and direct orders. Lehah will often appear to talk alone when communicating with Biis.

Even if he weren’t devoutly worshipping a demon, LeHah would still be an utterly ruthless, fearless, psychotic and self-serving international arm dealer. One ready to take huge risks and commit atrocious deeds to enrich himself.

Biis seeks to sow death, suffering and confusion. He seems to be a tad like a Warhammer chaos god, really. Whether he actually exists is another matter entirely.

After the 1996 loss he was but a shadow of himself. He seemed to simply be going through the motions. He was driven by his hatred of Azrael, but appeared unable to muster any sort of plan. *At best*, he had become a crazed legbreaker.

He’ll also have one of the following if he’s on an op :

Demon and on and on

The stats above are for the Sword of Azrael appearance.

During the 1996 clash, LeHah had but 020 Hero Points. Furthermore, he only used low-tech weapons. These included a crossbow with a flaming bolt, a poleaxe and a crowbar. All had normal stats for their class. Lastly, all his Mental and Mystical Attributes were lowered to 03.

In 2002 he had but 015 Hero Points, and tried to fight bare-handed. Furthermore, all his Mental and Mystical Attributes are lowered to 02, and his Wealth is down to 005. He also acquired a Creepy Appearance Drawback, by insisting upon wearing his costume plus warm clothing at all times. 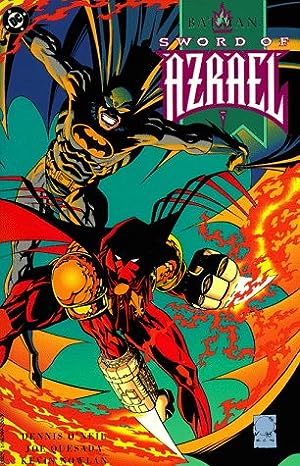 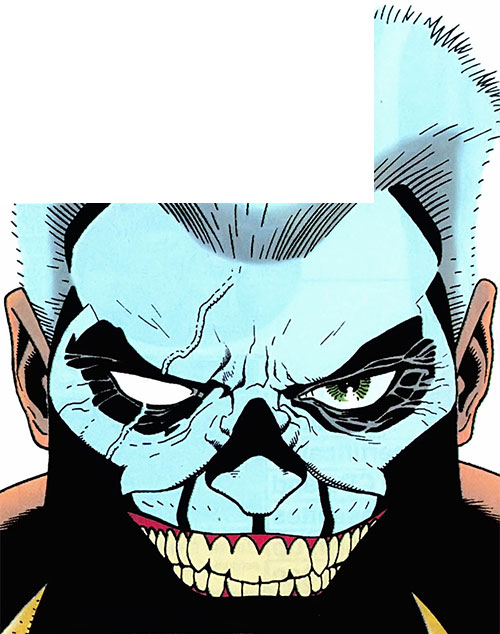 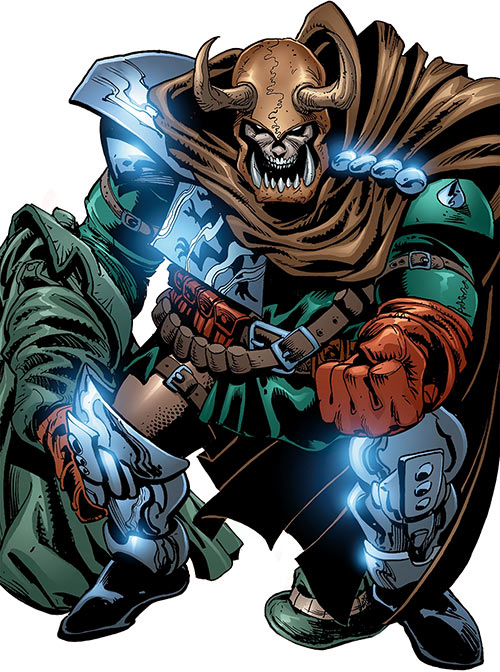