A powerful, deadly, psychotic and oh-so 1990s Spider-Man enemy. He appeared in 1991, but his career is still going strong and his profile high.

I suppose you could call him Spider-Man’s Joker, assuming one of the more carnage-happy versions of the Joker.

The source of all of Carnage’s powers and superhuman abilities is the symbiote  he is permanently bonded to. Besides superhuman strength (above Spider-Man’s and Venom’s levels) and agility, Carnage can adhere to most surfaces with his hands and feet, project a web-like substance, and mutate sections of his symbiotic costume into detachable weapons.

Carnage regularly animates his costume to create swing lines, snares and bladed weapons. He can also hurl such blades from anywhere on his body and they disintegrate about 30 seconds after they have been thrown. 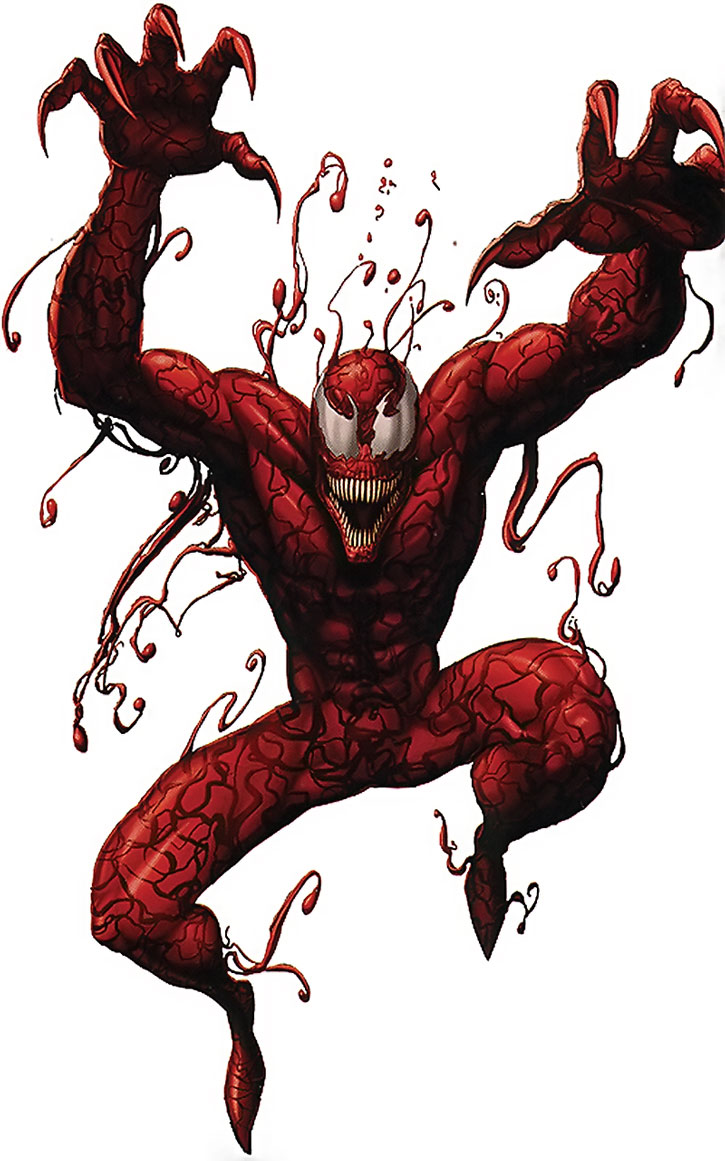 The symbiote that gives him his powers is susceptible to fire- and sound-based attacks, which is one of the few ways of bringing them down. His insanity also bestows him with an extreme pain tolerance and pain threshold typical of fictional psychopaths, making him more powerful than either Spider-Man or Venom, separately.

Carnage wears a full body covering tight costume in black and red colors, with lots of edges, covering his relatively thin frame. His facial features are discernible by colors around the eyes and the mouth. The suit is an evil looking version of the symbiote motif of Spider-Man and Venom. 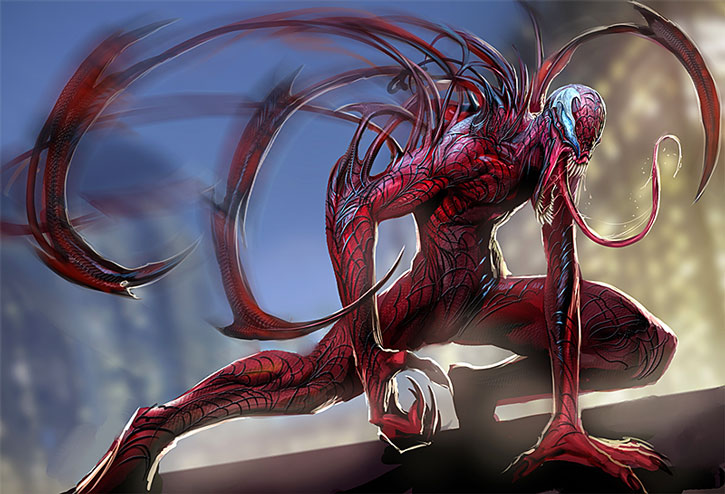 His body language is extremely chaotic and irrational. As Carnage, Cassady has elongated jaw sharp teeth, and ever moving tendrils from various parts of his body, both of which are a part of the alien symbiote.

Cletus Cassady is a relatively small man himself with red hair and freckles, who talks dirty and is often seen with an insane facial expression, for example, while talking with the doctors in his straight jacket in an asylum.

Imaginative psychiatrists have said that Carnage stinks bad, of rotten meat, in fact, and that he has a cannibal’s breath and slaughterhouse sweat.

Carnage is a very deeply disturbed and traumatized individual. He was a homicidal maniac already before his alteration with/by the symbiote, and his increased powers and abilities have only amplified his madness.

There is no reasoning with Carnage, no hope of redemption. He believes in carnage and mayhem with all his soul, and it is impossible to reach his inner good side since he, in fact, does no longer appear to have one.

He denies the existence of purpose and kills only because he sees it as an art, an aesthetic in it. He is completely dedicated to the concepts of chaos and death, and will attack allies if argued against on these concepts. His mindscape might be described as an imaginative desolation of meat, waste and blood. His view of the world is very twisted and he sees only vileness everywhere.

He is, however, no deep individual, but has a real shallow and single-track mind, and believes chaos to be sanity.

Of course, only utter lunatics and insane murderers dedicated to death are potential allies. If a chaos group is started, then Carnage’s strong personality usually makes him the natural leader. Individuals such as the Demogoblin, Carrion, Shriek and the DCU’s Joker, are insane and murderous enough to join up with Carnage. His personal favorites are Lovecraft, Manson and, of course, he himself.

Carnage has a complex love-hate relationship with his ’father‘ Venom. The two are currently engaged in a vicious hate relationship. He, of course, also hates Spider-Man who has defeated him several times, often by the help of Venom.

Naturally, Carnage often performs Critical Blows against superhuman opponents to cripple them fast, although he will engage in torture if the opportunity presents itself, particularly when Venom is concerned. Venom, on the other hand, loathes his “offspring’s” lack of control. He is determined to do Carnage in as fast as possible. 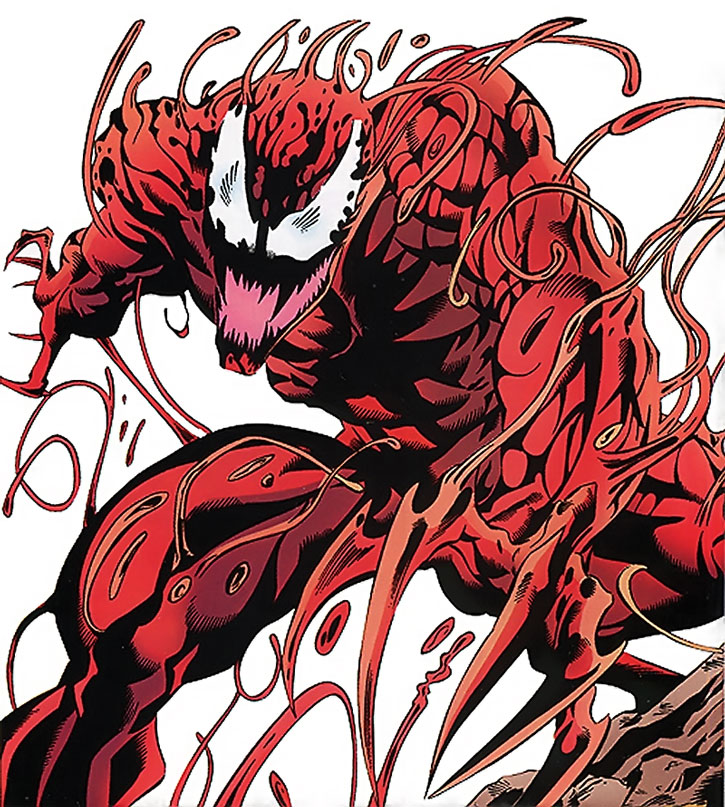 According to psychiatrists Carnage is in deep denial; that he is, in fact, terrified of the chaos that he claims to thrive on. It has been shown that Carnage clings to some good, old memories very deep inside himself. This side of him is practically impossible to reach, however, and for all purposes Carnage is completely and irretrievably insane, with no cure existing.

Importantly, the reason for his twisted evil is partly said to be that the symbiote in Carnage’s blood, which is an evil alien, and sometimes overrides the host code, namely his humanity.

Actually, the symbiote and Cletus sometimes engage in lengthy dialogue, where Cletus speaks out aloud and hears the Symbiote’s voice in his mind, about violence, killing or failures. The only way of stopping Carnage seems to be to use lethal force against him, risking to kill him. Carnage has, indeed, faked his death several times to allow for his escape to continue his lethal affairs.

“Guess I could say you axed for this, web man !” (throws symbiote-made axe-like projectile)

“Between the two of us, ’dad‘, there won’t be enough left of Spider-Man to put in a match box !” 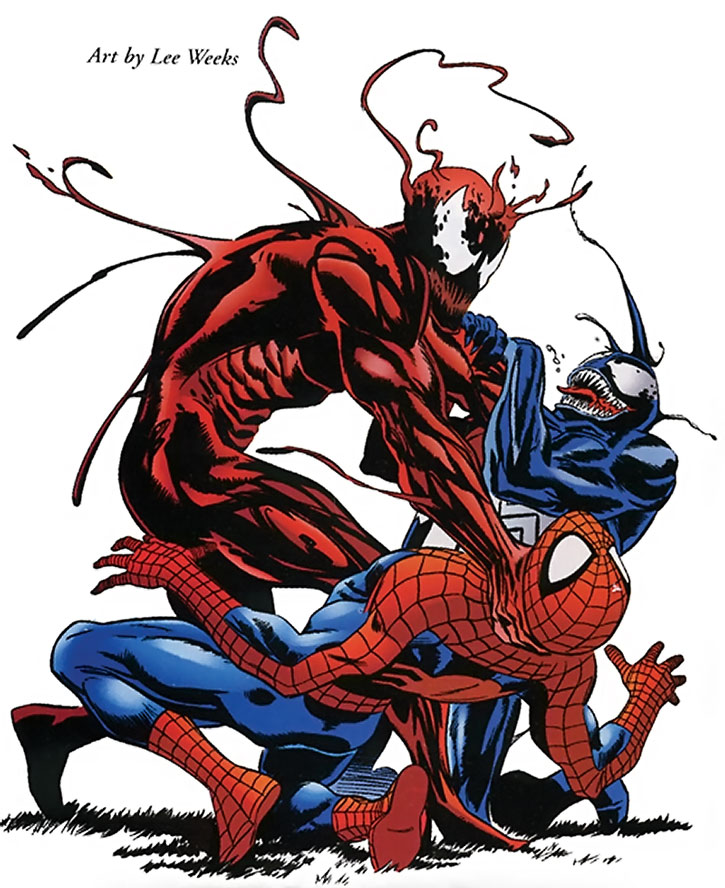 “I am gonna crawl inside your veins an’ rip out your bone marrow. I’m gonna spit in your lungs an’ stick forks in your heart. I’m gonna grind a heel in the front o’ your brains.”

“You are forgetting one thing : we want to kill him. It’ll be our pleasure to smash out his brains. Because we’re evil, violent creatures. We don’t need any other reason. We got blood in our veins, murder in our eyes, and time on our hands.”

Carnage could be a lethal foe of the Blue Beetle. This would bring in some much needed grittiness in the adventures of Blue Beetle, who could then shine as a beacon of righteousness and decency as a contrast to the lunacy of Carnage. 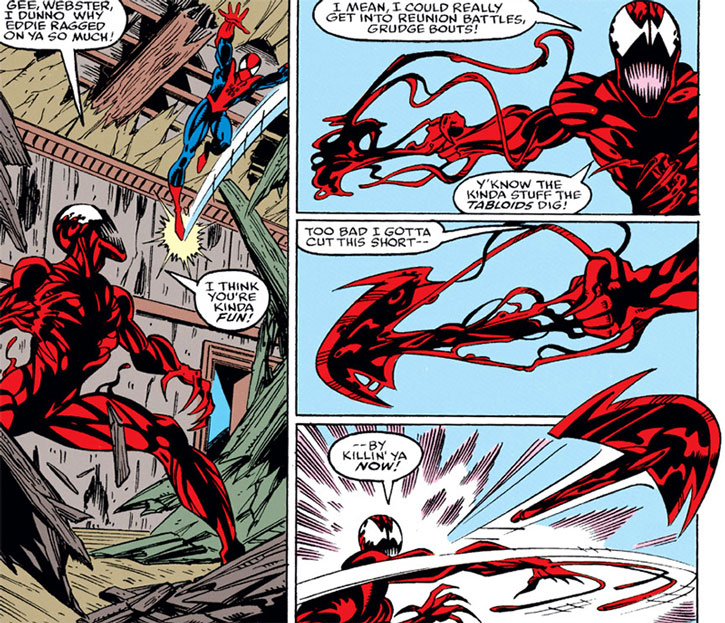 In the Spider-Man / Batman crossover Carnage worked together with the equally insane Joker. This was a fruitful alliance with Carnage being the muscle of the group. Such an alliance of brains and brawn, while their motives are incomprehensible and insane to others, could easily pose a difficult challenge for the player characters.

Another idea is to use Carnage as an agent of the Lords of Chaos. He could thus substitute Kestrel, the Hawk and Dove foe, or even be a failed forerunner, an experiment, before the creation of Kestrel. 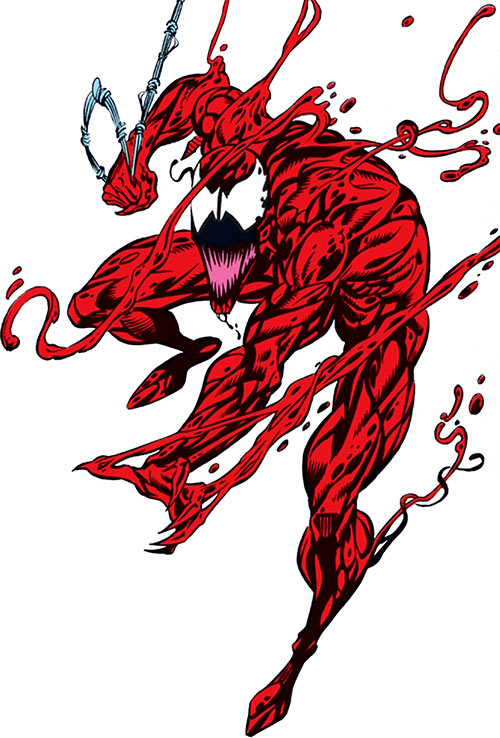 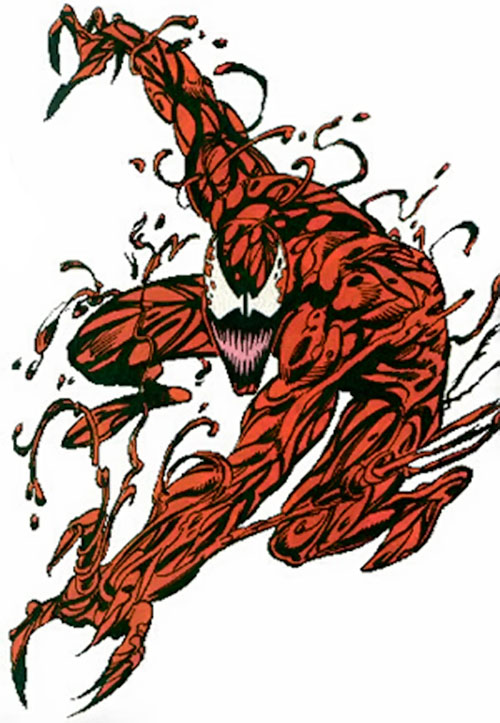 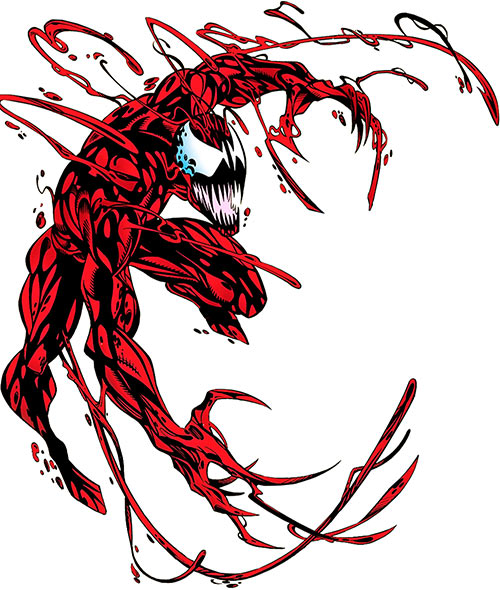 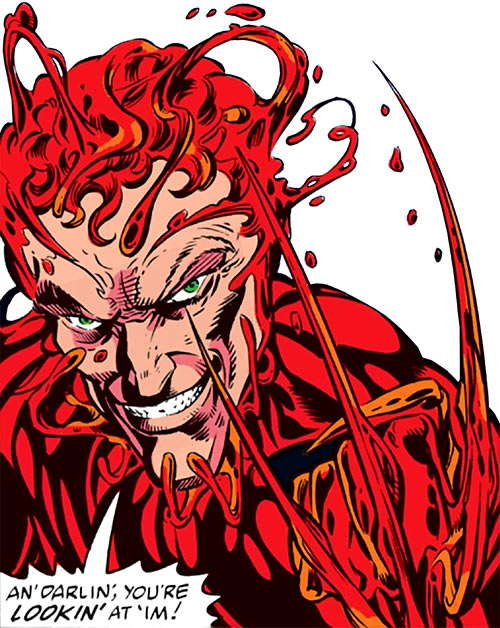