Donna along with her childhood friend, Ana Raynor, were trained by their fathers to become a fighting duo. Their greatest strength is each other.

Donna and Ana trained together their entire lives and concentrated on tandem moves that make them exceptional hand-to-hand combatants. They each instinctively know what the other is going to do and have developed team moves to such an extent that probably no other duo could beat them in hand to hand combat.

Carnation is an accomplished detective with great knowledge of international law. Carnation and Violet also receive new equipment occasionally from their fathers (represented, in DC Heroes RPG terms, by the Omni-gadget).

Their parent’s lives have been pretty confidential even to their children. Donna really never knew her father that well. She doesn’t know her mother at all. She lived a nearly confined life on military bases, always moving.

Donna grew up fast being “all business”. The only friend afforded her was Ana, and that was only because she was able could keep up with Donna.

When the Challengers started up in America, Donna’s father saw it as an opportunity. He contacted their leader, Blitzkrieg and offered both Carnation and Violet for membership.

Blitzkrieg was impressed after an initial meeting that ended with the girls helping him defeat an old nemesis. They moved to America and have since had very sparse communication with their fathers.

Her strict, sheltered upbringing and her own adherence to that way of life caused Carnation to begin her time as a Challenger with the Innocent drawback. However, she bought it off after her first adventure.

Her good looks and mad fighting skills have earned her a good degree of popularity with the world’s youth.

Donna is a bombshell with long pink hair. She is a very athletic woman. Her heroic costume is tight fitting red and black Kevlar. Her original costume was dark pink with light pink for a secondary color.

With matching black military style boots. Her gloves have metallic “caps” over the knuckles allowing her to do full power strikes on hard surfaces without danger of breaking her hands.

She sometimes wears dark tinted sunglasses that have the ability to polarize enough to repel the blinding effects of a flash bang grenade.

Meticulous and serious, Carnation lives between the lines. She enjoys things that are efficient and tidy. She also enjoys reading when she gets the chance even books with titles others would find tedious. Most of all Carnation loves to paint and has her degree on that subject.

Carnation is the yin to Violet’s yang. Sometimes Carnation can be the “buzz-kill” to Violet’s good time but it has never affected their friendship.

“The law is precise on this matter and I quote…” (goes into a detailed regurgitation of the law, verbatim)

Carnation and the Challengers can be inserted as is in one of the many cities needing heroes!

A 695 points Character (without equipment). 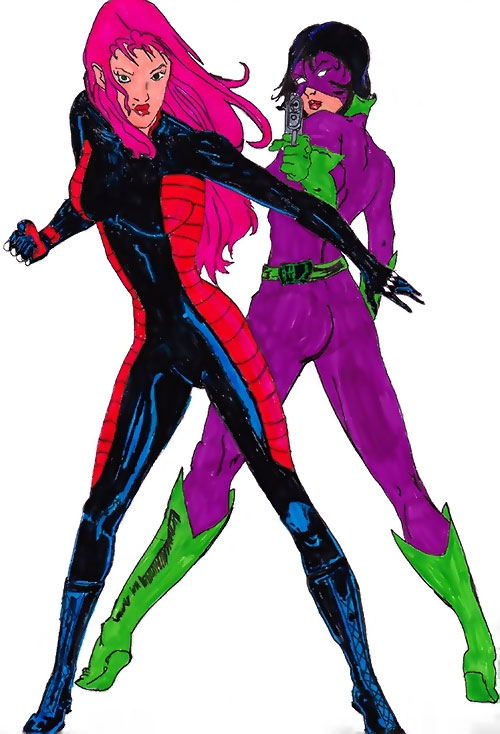