Cascade has the power to teleport (“cascade”) herself and others over vast distances, including between dimensions. When using it over short distances, which she does often in combat, she appears to transform into a mass of purple bubbles which flows between the two points.

Rhian’s fine control over her powers is such that she is capable of cascading the moisture out of a drenched suit, leaving it bone dry.

She has a superhuman strength and durability, and is an accomplished combatant and leader.

She has also displayed a set of wings which allow her to fly. These are drawn from the substance of her body by Cruiser’s telekinesis. But these can only remain as long as Cruiser can spare some of his power, and so long as she has enough body mass to supply them.

Cascade’s mother Maîtresse was the sole superhuman protector of her world. While pregnant with Rhian, she flew from Earth to stop the Rapture before it could reach there. She failed, and all life on the planet, including her husband and son, were killed. The Rapture, sensing her a threat, imprisoned Maîtresse inside a powerful field surrounding the solar system.

She used her powers to repopulate the planet with an illusory population, over which she held complete dominion. Meanwhile Maîtresse also she sought escape, and vengeance against the Rapture. This is the world Rhian was raised in, believing that her mother was playing god with everyone around her.

Rhian discovered she had the ability to teleport herself, but kept this secret from everyone.

One day Rhian was contacted by a mind from another world, Network. She discovered that she could use her powers to travel between dimensions also. She became quick friends with the first person she had met who was not altered whenever Maîtresse felt the whim.

When Maîtresse learned of Rhian’s powers and friend, Rhian fled with Network. They gathered together a group of other young royals, whose worlds had also been victims of the Rapture. Fleeing the Rapture, they arrived on Earth, near the Crossroads Coffee Bar, situated in a town named after it.

The bar is run by the sisters Pansy Smith and Violet Jones, and is larger on the inside than it appears from outside. Some doors within the building sometimes open into other places, even other dimensions . The youths came into conflict with the Female Furies of Apokolips, damaging to the bar as they fought. Afterwards they helped repair the damage and took jobs there.

Hanging out at the pub with mates

Their first encounter with the strange properties of the bar came when Cascade disappeared through one of the doors. When they found her, the other Sovereigns discovered she had been brainwashed and transformed into Nike by an unidentified opponent. As such she joined Zelus, Bia and Kratos. They used her to try to open an enormous set of doors.

The Sovereigns managed to free Cascade from their control just as she opened the doors, which led to her home world. Rhian was in danger of letting her mother, Maîtresse, free. But her allies managed to free her and close the portal before this could happen.

They settled into their new home, protecting it from extraordinary threats, such as Dystopia or Deadline. They also fought the super-powered serial killer Skin Dance, an old enemy of Crossroads’ sheriff, Molly Savoy. Savoy had previously befriended the Sovereigns.

While searching for a couple of teenagers who had gotten lost in the Bar when the Sovereigns had a battle there, the team travelled to their homeworlds. They first came into conflict with Triage, a creation of Maîtresse, sent to retrieve Cascade and fight the Rapture. Triage had empowered a couple of other individuals it had freed from the rapture, but brainwashed to obey it.

Cruiser’s fiancé Alyxandra Cobourg was transformed into Snapshot, and Colonel DeNoel, military commander on Rampart’s home world, was transformed into Siege. Sovereign Seven rescued the lost teenagers, but Triage and his servants eventually followed them to Earth where they clashed again.

IF Claremont THEN sexy slaves

Receiving a psychic distress call from a captive telepath, a slave of a company called allied with the Shogun crime cartel, Network allowed herself to be captured by Chimera. Chimera was an android serving Shogun, although she was actually in control. She kidnapped Cascade and Conal Savoy, Network’s boyfriend. They were presents for Dana Efemilia Hanro, the head of Shogun.

The other Sovereigns, and Conal’s mother sheriff Molly Savoy, tracked them to the island of Meridian. Meanwhile Network was carrying out her plan to free an infant telepath held captive by Shogun.

Following the events on Meridian, Cascade felt betrayed by Network, and left the team. She travelled to Manhattan, where she tried to establish a life for herself. There, she befriended Clark Kent. Eventually she came to term with Taryn’s actions, and returned to the team.

They again came into conflict with Zelus, Bia and Kratos. They had gained a new Nike, the transformed Power Girl. But Sovereign Seven managed to defeat them and free her from the enchantment. Soon afterwards they were asked for help when power-seekers released the Gatekeepers of the Abyss, and in fighting them, Rampart was killed. Power Girl took his place on the team.

During a teleport, Cascade swapped places with her mother, who spent time with the other Sovereigns. She later came to understand the nature of her homeworld, that she and her mother had been the only living beings there. Due to that, and how the rest of the Sovereigns described her mother, when the two were swapped back, she began to reconsider how she had viewed her.

After saving Temujin, heir to the throne of Kuristan, from assassination, Cascade became smitten with him. Thus, she offered the Sovereigns’ help in freeing his country. The civil war ended when the Rapture arrived on Earth. Despite having their powers suppressed, the Sovereigns managed to repel the invasion.

Cascade is a confident leader. She is devoted to the well being of her team-mates and friends. Throughout her childhood her only constant was her domineering mother, who changed everyone around them at a whim. Rhian grew to fear and hate Maîtresse.

When she met Network, and gathered the other Sovereigns together, she felt she had a true family, of people she could trust. So when Network betrayed them, Cascade was hurt the most, and she left the team. After a while she managed to forgive Taryn, but they are not as close as they once were.

She used to believe her mother was the ultimate evil. But after learning more about her mother’s past Rhian is more uncertain of her feelings towards Maîtresse.

When she recruited Finale they made a Blood Oath. Finale swore to serve Cascade until death. In fear of again being dominated by the World-Soul, or any other entity, and used to wipe out the population of a planet, as she did on her homeworld, Finale made Cascade swear to take her life if she was ever in that position.

Darkseid: “You have your mother’s spirit.”
Cascade: “I’m nothing like my mother !” 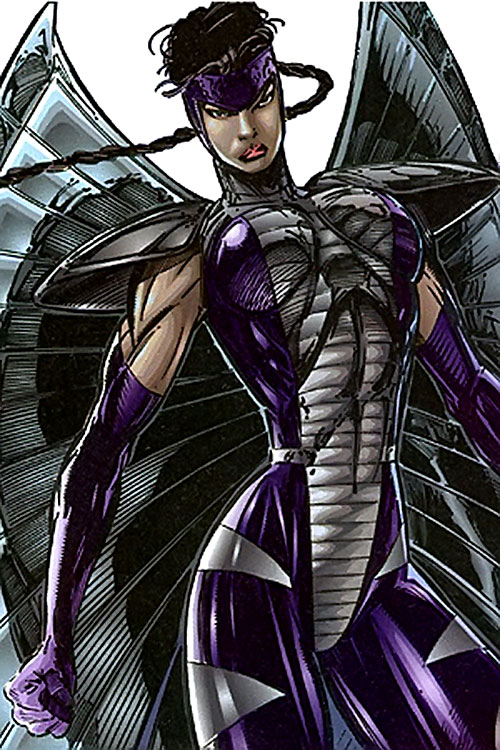 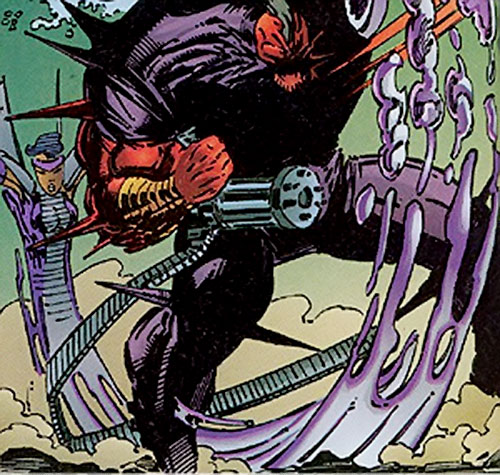