Lathrop is a skilled, resourceful but not cinematic  BATF agent.

She’s particularly competent at undercover work but is also a good investigator, driver and tactical operator. For some reason she prefers to fight with a handgun.

She’s also a classic good-looking blonde, which has proved useful (if oft unpleasant) in her infiltration work.

In 2003 Cassie Lathrop, a BATF agent from Oregon, was working undercover to build a firearms trafficking case. During this successful mission she briefly ran into Wolverine (James Howlett), who was tracking down a shipment of weapons sold by her suspect.

The thrill-seeking Lathrop developed something of an obsession with Wolverine, and took comp time to track him down. Investigating the weapons the Canadian mutant was after, she ended up in a tiny American town. She discovered that it was run by a cult-like survivalist organisation, and was captured when it unexpectedly turned out that the town sheriff was also a member.

The battered Agent Lathrop was imprisoned with the camp’s harem, but soon crafted a shank from glass shards and escaped after killing a guard. At this point a berserk Wolverine invaded the camp, killing anyone with a gun and greatly facilitating the flight of Lathrop and her co-escapees.

After 2 months without a lead, Cassie heard that Wolverine had been sighted in the El Paso area and took a vacation there. With the help of Border Patrol officers, she located her man, but he rebuffed her attempts to engage him. Undaunted, she set up camp in a bar run by friends of Wolverine, refusing to budge until he came back.

At this point Wolverine was fighting a coyote border-crossing syndicate, a case that shook him as he ended in an ethical quandary. Needing somebody to talk to, he gave in to Agent Lathrop. As she had intended, this became a fling that lasted for a few days, until Wolverine just vanished one morning whilst Cassie was still sleeping.

By 2012, Lathrop had left the BATF and was with a mercenary intelligence outfit run by spymistress Seraph, with Lynx as the third member. They were hired by the Japanese government as their field agents in New York City, where they foiled an underworld hit by evacuating the Kingpin (Wilson Fisk) and a Yakuza elder.

As the client wished, this prevented a war between the Hand and a major Yakuza clan. Both organisations would have undoubtedly blamed each other had the hit been successful. However the war nevertheless took place, as the elder was assassinated by Sabretooth on his flight back to Japan.

Seraph later developed ties with former investigative reporter Melita Garner, a fourth ex-lover of Wolverine. Garner started working for her agency as a detective. In 2013, Garner obtained information about the Covenant organisation, and agreed with Seraph to launch a raid to rescue Wolverine from the Covenant.

Being the best driver of the lot, Lathrop flew a stolen S.H.I.E.L.D. flying car to infiltrate Seraph and Garner into the Covenant base. The rescue was successful, and the 3 women helped Wolverine invade another Covenant base to put an end to the crisis.

Lathrop is a driven, obstinate professional. She is used to working alone and prefers it that way. She’s also something of a thrills chaser who trusts her instincts and is interested in danger and new experiences. There’s definitely an edge to her. In an heroic fantasy setting she so would have been an adventurer.

Somewhat ironically for a BATF agent, she’s a big fan and connoisseur of both alcohol and firearms. On the other hand she’s unexperienced and uncomfortable with traditionally feminine pursuits, such as stuff having to do with babies or cooking.

In more recent appearances Lathrop behaved in a resentful and dourly hostile manner toward Wolverine. But it seemed to be a product of poor writing.

“I got no time for animals. You decide you’re a man, you know where you can find me.”

(Drunk) “ATF, Nestor, my rotund and bespectacled little friend. Alcohol, Tobacco and Firearms. Three things that are bad for you if you don’t know how to control them. And like all bad things, you get a taste, you want more.” (proceeds to pour a glass a tequila to serve as a chaser for the previous litres of margaritas)

Connections:
Wolverine (Low), although she presumably cannot contact him.

Notes:
As an ATF agent she had Credentials (BATF, Medium ; other US police and law enforcement agencies, Low). This is later replaced with a Low Connection to Seraph. 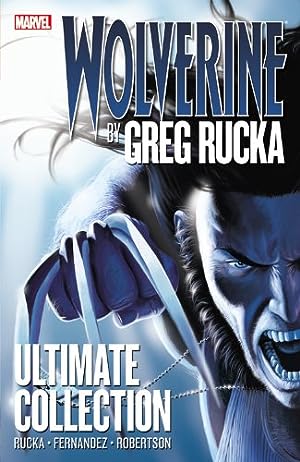 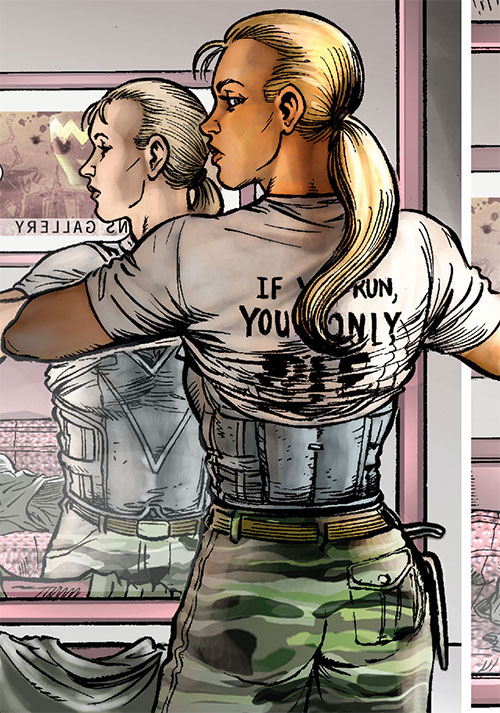