This obscure DC Comics character has but one real appearance, in 1952. He’s Catwoman’s brother.

If you want a whole lotta context, you can first read our series of chronological Catwoman character profiles. Or ask your cat.

The Cat King is a powerful fighter, athlete and acrobat.

He also uses some special equipment :

For the hep cats in the audience, here’s thematically appropriate 1952 music to accompany this article. Les Paul & Mary Ford were big back then.

Karl Kyle is the brother of Selina Kyle. Their dad operated a pets shop in downtown Gotham, specialising in cats. He taught them a lot about kitties.

Karl lost contact with his sister circa 1938. Selina had been rendered amnesiac in a plane crash. Having forgotten who she was, she created a new life for herself as the famous criminal, the Cat Woman.

This lasted until 1950, when she recovered her memory and reformed. Selina and Karl were then reunited.

Batman once recognised one of Karl’s techniques as a circus trick, and Karl seemed comfortable with both acrobatics and lions. It thus seems likely that he worked with circuses during the 1940s.

However, by 1952, he (and his dashing moustache) had become fed up with his meagre income. 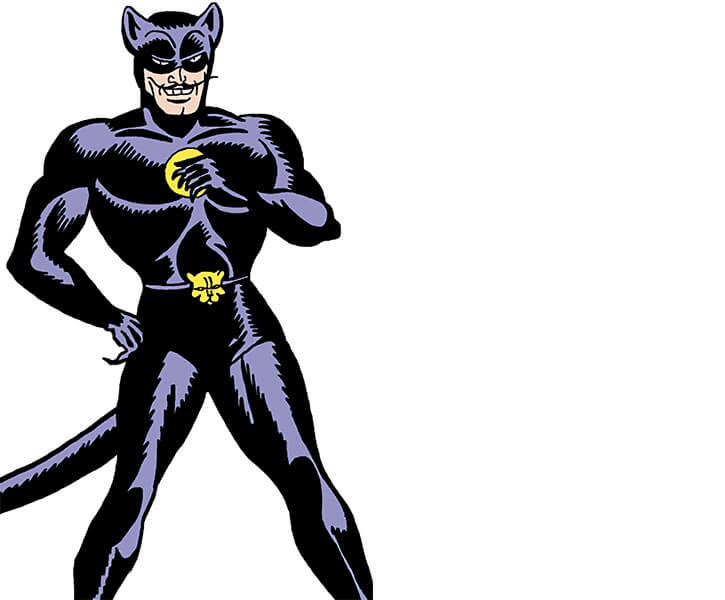 Karl had apparently admired Catwoman’s skill and daring crimes even before he learned that she was his sister. To succeed her, he created the King Of The Cats identity.

Soon, Gotham again knew what we all have come to fear in our daily lives – cat-crimes ! The Cat King’s methods were more forceful than Catwoman’s, but otherwise similar.

Am I my brother’s keeper ?

During his cat-crime wave, Karl kept visiting his sister. He offered her a place at his side as the Queen of Crime.

But Selina kept refusing. She instead tried to convince him to reform, and return the stolen goods.

Batman and Robin realised this. But the jealous Wayne misinterpreted, thinking that Karl was Selina’s lover. The confusion lasted for a while, since Selina assumed that Batman knew she had a brother.

Ms. Kyle even once knocked out the Dynamic Duo (from behind and with a big vase, of course) to prevent the Cat King’s arrest. 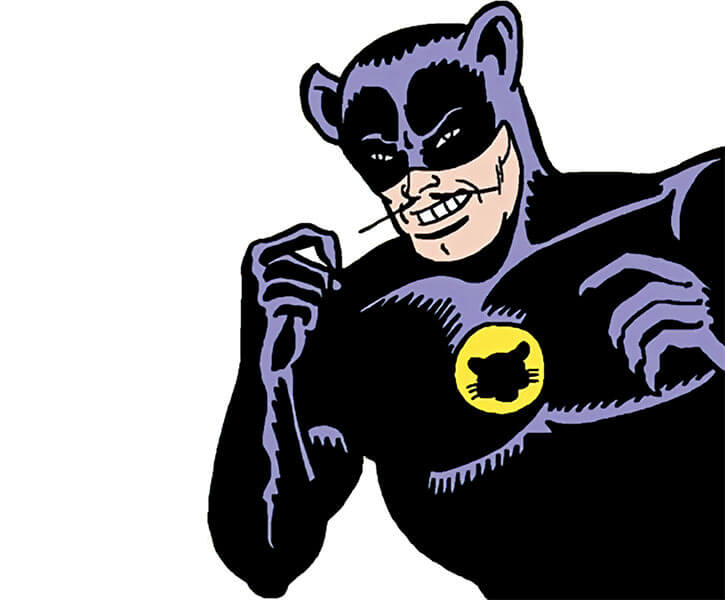 Eventually a brawl between Batman and the King Of The Cats broke bad. Both ended up stunned in front of angry big cats.

Since Selina had just saved his life, Karl felt morally obligated to accept his sister’s plea that he surrender and go straight. Batman pointed out that prison could allow Karl Kyle (and his dashing moustache) to learn more marketable skills.

(It is implied that Karl also returns the stolen goods as Selina wanted him to. Thus, Batman assumes that the former Cat King won’t be behind bars for that long.)

(The size of Selina’s pet shop varies during the early 1950s. But it seems that it’s too small to support Karl as well as Selina.)

Return of the King

In 2006, a man named Karl and dressed in the King Of The Cats costume was seen at a super-powers convention.

He was among the various D- and E-list costumed heroes making a little extra money by meeting with fans, selling merch, participating in panels, and other comic-books-con-like activities.

The probable Cat King is seen with Stripesy, Lil’ Hollywood, two Boy Blues, and Mind Grabber Man (Lucian Crawley). Apparently Karl and Stripesy had already worked together, and along with Gimmix.

There’s no other info, and post-Crisis Selina Kyle doesn’t have a brother. Furthermore, this convention scene is laced with Easter eggs referencing elements that disappeared during the Crisis.

(The implication might be that a version of some pre-Crisis events and characters did take place post-Crisis, but was so minor and uninspiring it was never chronicled. This would serve as a metaphor about the editorial choice of removing inconvenient, dated, nonsensical… stories from the rejuvenated DC Universe. Or maybe, heh, Hypertime  .) 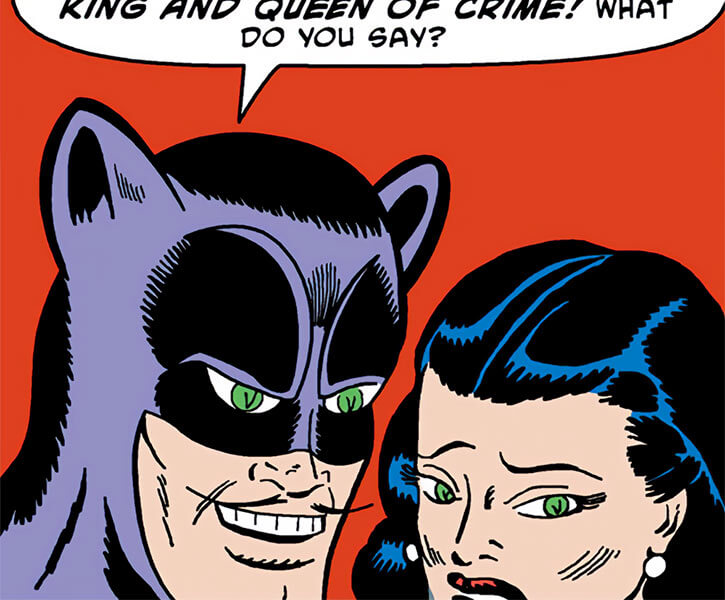 Like Catwoman, he works non-lethally. But unlike Catwoman he’ll punch people unconscious.

The Cat King is primarily a thief. He’s after the moolah.

His sister is very important to him. Karl wanted to share his victories with her so she’d get loot and influence. Since they cared so much for each other, it seems likely Selina would have convinced Karl to stop his scheme sooner or later.

King Of The Cats

He’s a 1952 character so I went with blocky Skills. Since he’d likely be able to demonstrate any Subskill necessary to advance the plot.

That the gloves aid in climbing isn’t clearly demonstrated, but seems likely. Ditto for most of his Familiarities.

The combat stats match assumed numbers for Batman in 1952, making them about equal. But there hasn’t been research yet as to Batman’s 1950s scores.

Writeup completed on the 6th of November, 2018.