“SHE STALKS BY NIGHT ! Introducing : Marvel’s newest action bombshell ! How did a beautiful girl gain the uncanny powers of a KILLER BEAST ?”
— Cover blurbs of The Cat #1.

Because writeups.org without the Cat is like a fish without a bicycle  . 😺

Greer Nelson is a Marvel comics super-heroine, known as The Cat and as Tigra.

Her career started in 1972, but soon ran into vicissitudesSudden and usually bad changes of fortune..

We strongly suggest reading her profiles in the chronological order, namely :

Ms. Nelson received a special treatment that turns women into superhumans. As she later learns, it gives humans the best traits found among the Cat People.

The Cat costume includes retractile claws on both the hands and feet. She doesn’t normally use those as weapons, but they’re great climbing tools. With her agility, the Cat can even use her claws to crawl upside-down along ceilings.

The hand claws can also be shot as a grappling hook trailing three lightweight cables. The Cat uses this hidden mechanism both as a swing line, and to engage opponents out of melee range. She will usually swing her grappling hook to snatch weapons out of enemy hands, or to hit people with the flat of her claws.

She only ever uses one grappling hook at a time. 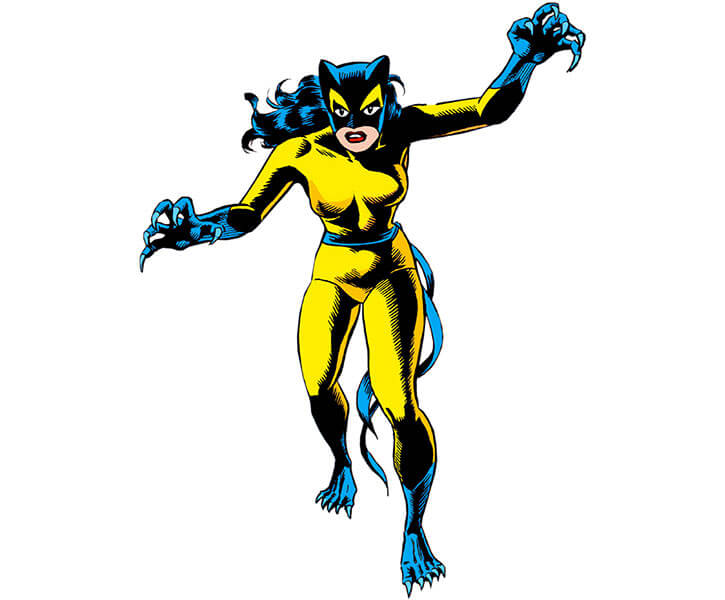 Something to evoke 1972… the main issue being that there’s an awful lot of suitable material.

But let’s go with one of the G.O.A.T.s, who released a classic that year.

Greer Grant was presumably born circa 1952. She was a pretty American girl raised in a wealthy, conservative environment.

(We assume that events take place as per date of publication, since “sliding time  ” is unworkable. Thus, Greer is born in 1952 so she can be 20 or so when The Cat #1 is published in 1972. See our ageing in comic books article for more.)

Common wisdom among her peers was that women were fragile dolls meant to have a sheltered domestic life. But she nevertheless became a college student in Chicago.

This uncharacteristic flare of independence did not last. As soon as she met her future husband, manly police officer Bill Nelson, she quit college.

Although he loved Greer dearly, Nelson was a 1960s macho man. He thought that it was unfit for a woman to study, do home repairs or even drive a car. He wanted a full-time housewife.

Greer obeyed despite her vague doubts.

They presumably married in 1971. 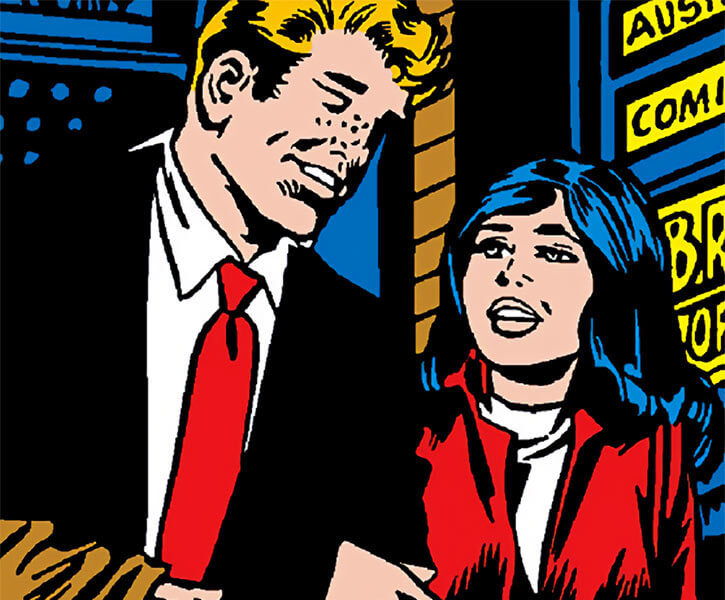 About a year after their marriage, the Nelsons stumbled upon a heist in a small store. Though off-duty, Bill arrested the perpetrator. However, an unseen accomplice came in running, panicked and opened fire.

Greer’s life had been shattered in seconds. As she worked through her grief, she realised that she had no income and no qualifications.

She tried to find a job for months, without results. She felt increasingly angry and powerless.

The doctor is in

She then bumped into somebody she knew from college – the far-sighted Dr. Tumolo, a professor of physics.

The scientist remembered Greer as a bright lab assistant. Her current project being well-funded she hired the lass.

Donalbain wasn’t interested in Tumolo’s politics. Rather, he envisioned himself as the outlaw lord of an army of statuesque super-amazons in skintight costumes.

A vindication of the rights of lab assistants

Greer Nelson found Donalbain creepy. She suspected that he was up to no good.

She therefore convinced the doc to have her as a second, secret test subject. She would receive the same treatments as Shirlee. Greer could thus be their ace in the hole if things went ugly with their financial backer.

Ms. Nelson was far more rigorous than Ms. Bryant about Tumolo’s physical and intellectual training program. Her covert achievements proved that the doc’s bizarre enhancement tech was a success.

Meanwhile, Donalbain ran less conclusive tests with Bryant. He equipped her with a cat-themed yellow costume and a claw/grappling hook contraption.

One night, Dr. Tumolo sneaked into Donalbain’s headquarters. She witnessed such a test – but the unfocused Bryant died in an accident.

Tumolo was spotted and tried to flee, but Donalbain’s men made the lab explode to get rid of the elderly researcher.

She told her assistant what she had witnessed. She also told her where to find one of the yellow catlike costumes as a proof of Donalbain’s scheme. 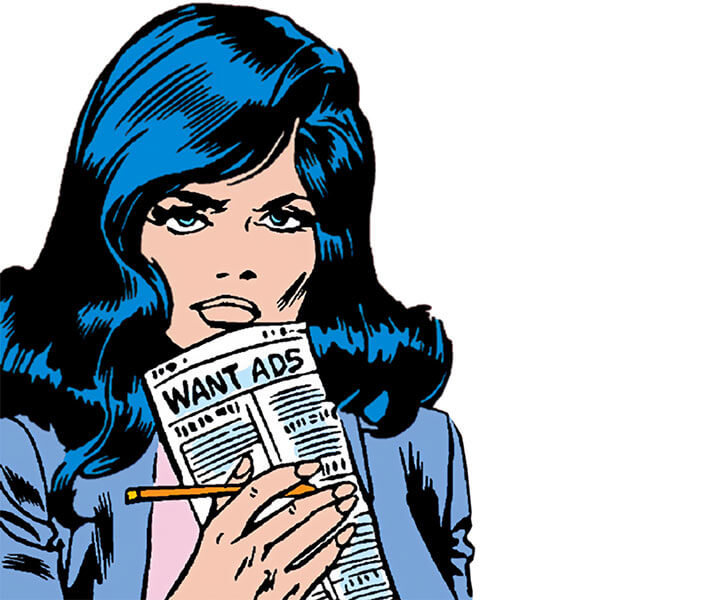 When the morning cries and you don’t know why

Nelson donned one of the costumes to take direct action. She then sneaked into Donalbain’s HQ and wrecked his copy of the Tumolo machinery.

In the commotion, the unstable Donalbain committed suicide.

But things continued to go wrong. The Owl kidnapped Dr. Tumolo. He used special machines to drain her knowledge.

The year of the Cat

As “The Cat”, Nelson defeated the Owl and his men. Albeit Dr. Tumolo cheated death again, she was left brain-damaged by her ordeal.

Greer had Dr. Tumolo moved to a country house where she and physicians could take care of her.

Greer Nelson otherwise focused on being a costumed adventurer, fighting 1970s C-list Marvel villains such as Commander Kraken and Man-Bull.

She started establishing a good relationship with the Chicago Police Department, but failed to prevent the terrorist Man-Killer from slaying Mayor Samuels for his reactionary, anti-women’s-lib reelection platform.

The Cat tracked Man-Killer down to New York City, where she teamed up with Spider-Man to stop her. 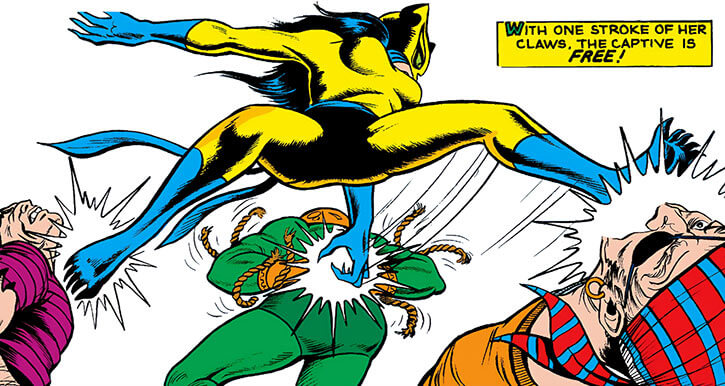 Shot in the back

Dr. Tumolo made another miraculous recovery, regaining her mental faculties.

However, she was as unlucky as she was indomitable. Hydra agents came to capture her.

The Cat intervened and scattered the goons. But Tumolo’s nurse was secretly a Hydra agent. She shot the Cat in the back with an alpha radiation pistol.

Determined to save Nelson, Dr. Tumolo revealed that she was one of the Cat People. Beyond her strange technology, she also had access to magic. Tumolo thus could save Greer from the otherwise incurable radiation poisoning.

One ritual of the Cat People could turn a Human into a Cat Person super-heroine called Tigra.

This transmogrificationMagically transforming something into something else. had only been performed once before. But Dr. Tumolo thought it could transform Greer Nelson deeply enough to get rid of the alpha radiation.

She convinced her people that her protector was heroic enough to be the subject of the ritual. An emergency ceremony soon took place.

(These are our contributor Darci’s notes for the likely sequencing.)

In The Cat #1, page 6 panel 5, Greer’s flashback is to a Spring day two years ago. It’s the conversation between Greer and Jennie, who are about to meet Bill by accident. The University of Chicago uses academic quarters, not semesters. IIRC they’re the pioneers of that arrangement.

Later, the text lists that Greer dropped out of college as a sophomore and married Bill. Even later, Greer went back to school while working as Dr. Tumolo’s assistant. But she only learned the purpose of the experiment on the same day they met Donalbain and Bryant.

This is my reconstructed timeline: 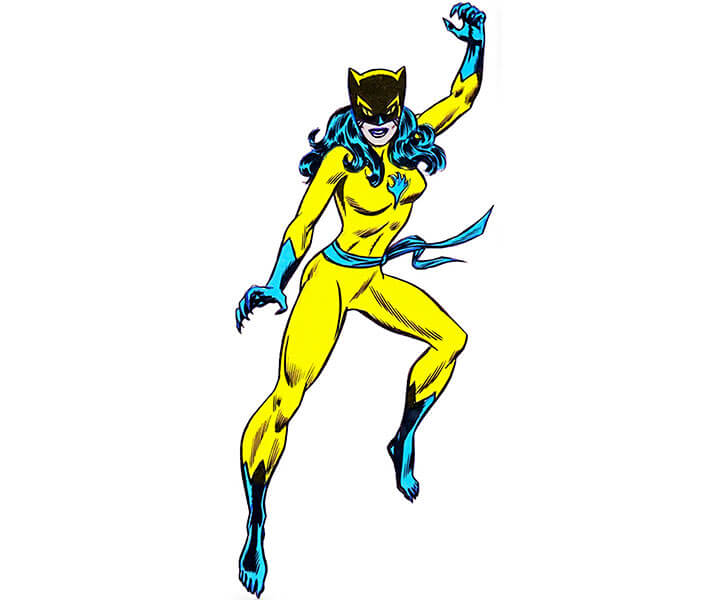 The eyes of the Cat cowl reflect the light much as a cat’s would.

The yellow costume has been likened to Wolverine’s 1974 costume, though there’s no known link. 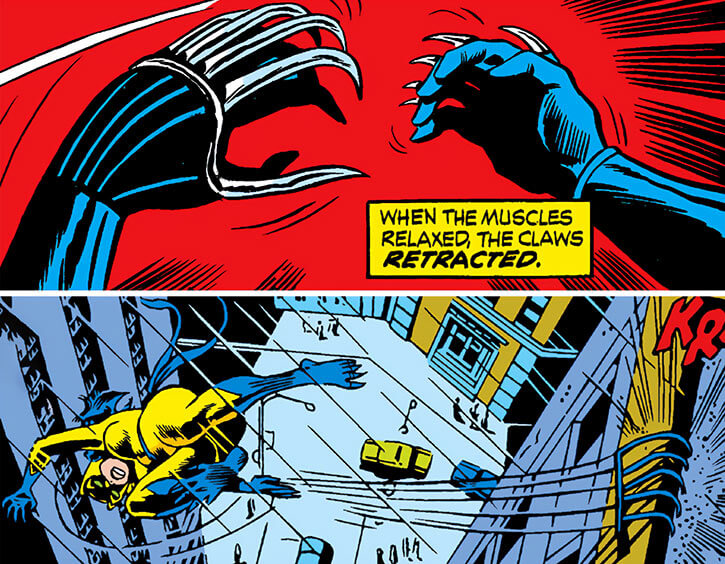 Greer is proud, and determined to live her own life.

Although she’s not a full-fledged feminist like Tumolo, Nelson is sympathetic to the women’s lib movement. She wants to stand on her own two feet as a liberated woman.

She sometimes wishes her husband were still alive so she could turn to him for support. But she dislikes feeling that way.

Like many heroes of the 1970s, the Cat spouts hip, bad, and now dated repartee. This… peppy style sometimes bordered on the nonsensical for those, mmm, too square to dig that rap.

Greer is kind and empathic, even before her empathic sense was enhanced. Thus, she could sometimes be played for a sucker.

She’s loyal to a fault, and taking care of the wounded Dr. Tumolo consumes a lot of her time.

She did date a bit with Tumolo’s handsome lawyer, Ben Richards. But her true love was being the Cat.

Greer felt a craving for adventure and danger and, like her namesake, developed an intense curiosity. 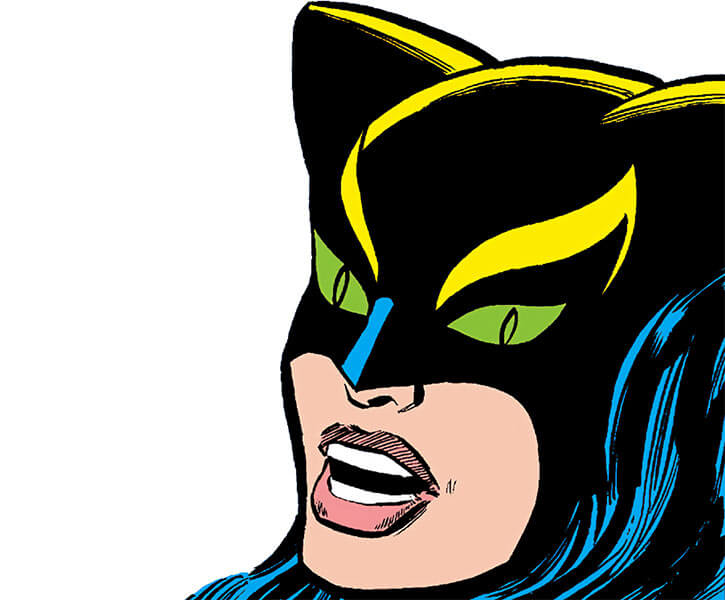 “Strong ? Daddy, I don’t know how to be strong ! All my life there’s been someone more than willing to take care of me !”

“Violence begets violence ! Didn’t you learn anything from history ? Or maybe John and Yoko   ?”

“So ! The hand is quicker than the foot ! Thanks for the pugilistic tip ! Here’s a hint from Heloise of my own !” (THWAP !)

(Grabbing a fleeing thug with her grappling hook) “What’s your hurry, boyo ? I think I snagged a big one…” (The fleeing thug drags her behind him) “Hey ! A Nantucket sleigh ride !” 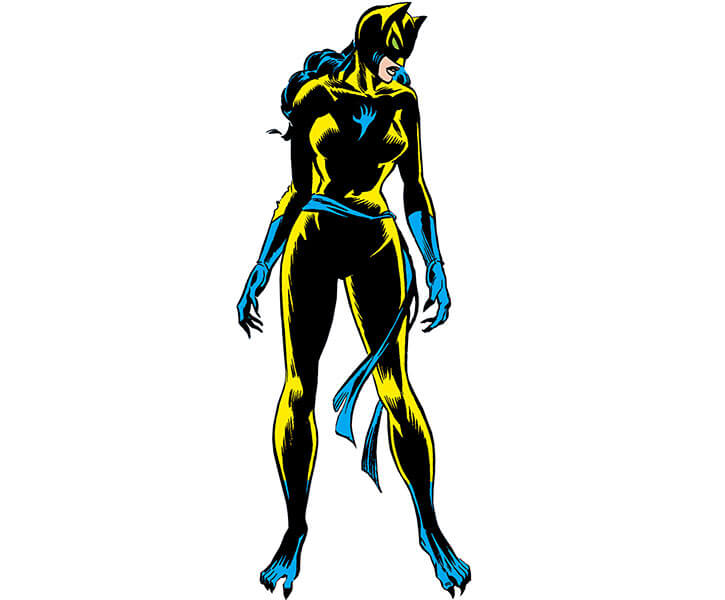 Superspeed is limited to Mental tasks.

Thief (Pickpocket, locks and safes) is Contingent Upon Hypersensitive touch. 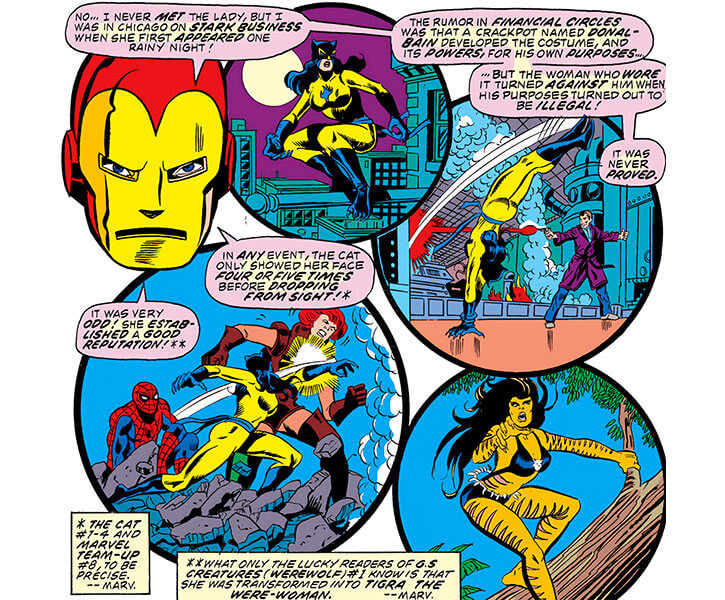 WORG contributors likely represent half the worldwide fanbase of the Cat, so we ended up with extra illustrations I don’t feel like throwing away. 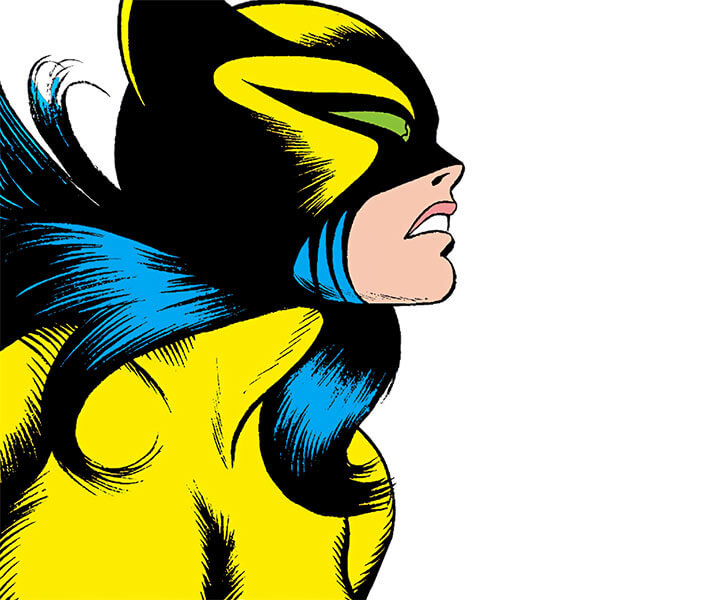 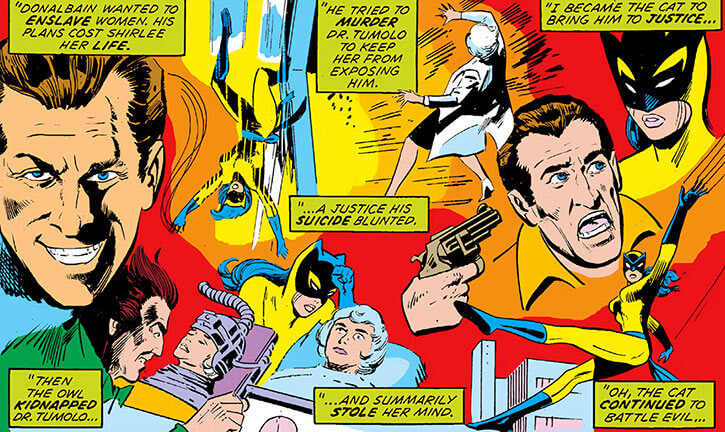 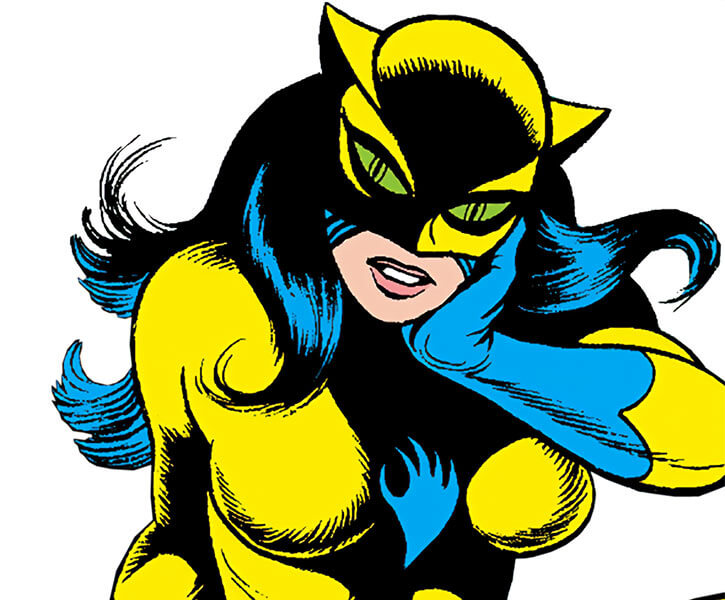 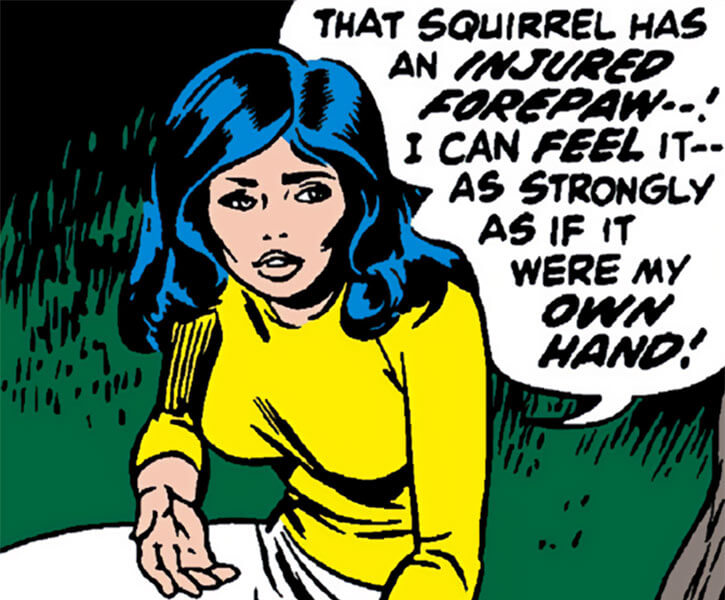 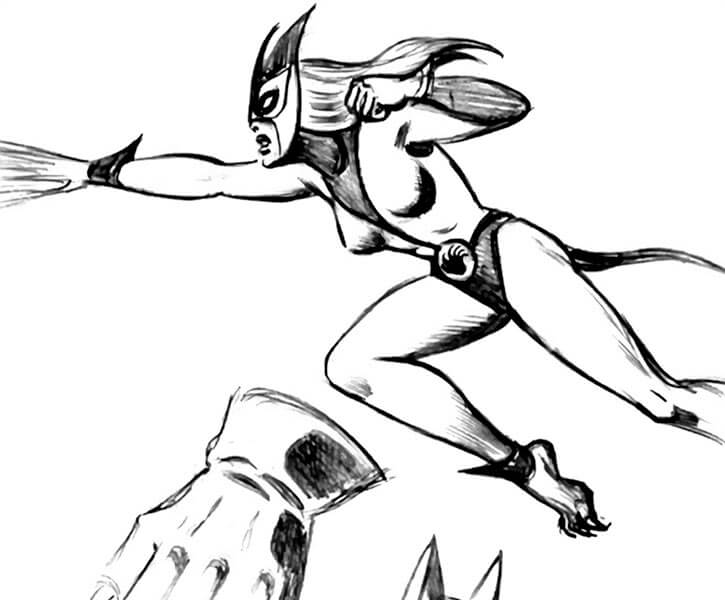 This rework concept sketch for the Cat is reproduced in The Art of Ramona Fradon. The series was cancelled before this new Cat look could appear.

Source of Character: The Cat (or, as the covers said, Beware ! The claws of the Cat) in 1972, and a handful of contemporary Marvel books.