Catalyst is a “living pharmacopeia”. Meaning he can secrete any known drug within his body and deliver it through touch. Presumably, he mixes them with a DMSO-like compound he secretes along with the main drug. I have assumed such syntheses were not instinctive, and that he was highly knowledgeable about pharmacology, pharmacodynamics, etc.

An exceptionally healthy man, such as the Blue Beetle, would usually suffer moderate effect from a touch. But more ordinary people will be strongly affected.

Catalyst can also affect himself. For instance at one point he alters the pigmentation of his retina to ignore the Beetle’s light strobes (Shade). Later, he generates an adrenaline variant in his veins (Adrenaline Surge to STR).

Later in his career, Catalyst also starts emitting a cloud of halotane around himself, but this is too slow to work against a trained and decisive person. Perhaps he had lost the habit of fighting skilled opponents.

Catalyst is also a solid athlete and hand-to-hand combatant. Yet his usual form of attack remains to sneak behind his target and lightly touch them to drug them.

Catalyst’s appearance in JSA in 2000 was one of, you know, *those*. None of what little characterisation he has was evident, and his powers were different. It was explained he could “alter the chemical makeup of organic compound”. He used this to paralyse Sand by changing his exact chemical composition and breaking his polymer chains.

There is not enough data to hazard a guess as to the game effects. And by his next appearance Catalyst had his normal powers.

Sigh. Perhaps somebody was thinking of Dr. Alchemy instead ?

In the 1980s, Cornelius/Kreig was the largest multi-national pharmaceutical company. The aged co-founder and president, Dr. Klaus Cornelius, was not a man dealing with frustrations and obstacles very well. Therefore, his companies tended to engage in illegal endeavours whenever that was profitable and/or expedient.

Unsurprisingly, Cornelius/Kreig had a number of brushes with the superhuman and espionage worlds. As a result, worked on developing their own superhuman agents through chemistry. One of the successes, created at the lab of Nice, France, was the commando called Catalyst. From the hat he was seen wearing at one point, I would imagine that he’s a Francophone Swiss.

Cornelius had him immediately sent on a mission to the US. Catalyst was to kidnap Jeremiah Duncan, an employee of Kord, Inc.. During a previous phase of his career, Duncan had worked at Cornelius/Kreig and developed a revolutionary chemical on his own time. And he refused to give the formula to Cornelius.

Once in Chicago, Catalyst quickly found Duncan and abducted him. He kept his target drugged out in the flight back to Nice. There, Duncan obstinately refused to break under Catalyst’s chemical interrogation. Cornelius gave the order to up the doses to dangerous levels. He then had Duncan put in suspended animation, and his memories of the interrogation destroyed. 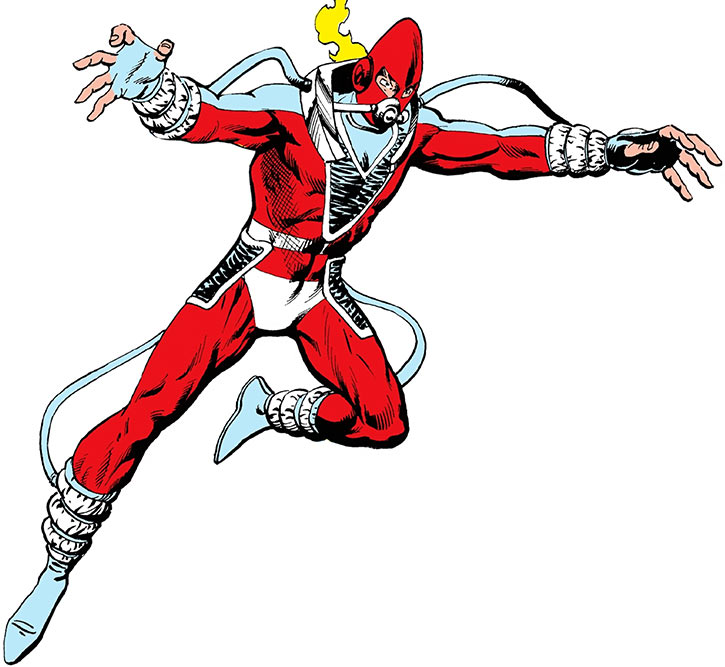 This last-ditch interrogation had revealed that Duncan had mailed a sample of compound to Kord’s branch in Iran. That took place in 1979, just before the Revolution . After the Shah had been ousted, Duncan had been unable to reclaim the sample. Cornelius sent Catalyst to Iran to locate and bring back the compound.

In Iran, things FUBARed. Catalyst ran right into Blue Beetle, and assumed the American hero was after him. It wasn’t the case – the Beetle was on an unrelated mission for the Global Guardians. The Beetle flubbed his mission, and the fight apparently led Catalyst to fail in his.

The mercenary was thrown off by Blue Beetle and spotted by the revolutionary guards, who went after him. Catalyst eventually managed to get out of Iran. It is unrevealed whether he ever recovered the compound.

In the late 1980s, Cornelius/Kreig loaned Catalyst to an obscure team called the Captains of Industry. The Captains in turn had Catalyst offer his services to the Institute for Metahuman Studies, headed by Dr. Simon Lagrieve. This was part of a contract between their corporate backers and the IMHS.

The Captains were an unusually obscure team of corporate-backed superheroes in the late 1980s and early 1990s. Known membership included :

Though Firehawk and Maser were actual, if minor, heroes, Catalyst wasn’t. The Captains apparently chiefly scored PR points and served as agents of their employers. The later missions tended to be low-profile things that made sense from a business standpoint but were jobs, not adventures.

The team later passed fully under Sunderland control. Silver Swan joined after meeting with Firehawk, and Major Victory was recruited. How long Catalyst stayed with the team is unrevealed.

As he was in Pittsburgh with the IMHS, Catalyst was drafted by Amanda Waller. Black Adam had just requested assistance from Waller in order to strike at Circe’s island and put an end to the War of the Gods , which was then raging.

Waller did not have much resources. Yet she assembled most of her core Suicide Squad operatives, pressed the Captains into service, and arranged to add some cons and minor heroes to the mix. Though there were some casualties, the strike was generally successful.

Into the XXIst century

Catalyst apparently became a freelance merc, and may have stopped being a Cornelius/Kreig employee. He was hired by Kobra as part of a major terrorist gambit, chiefly to serve as HQ security. This appearance of his had numerous strange discrepancies.

He took Sand out in front of millions of viewers when the JSA started getting close to Kobra. But Catalyst soon decided that Kobra was completely insane and to discreetly leave. He was unlucky and ran right into the rest of the JSA. They agreed to let him go if he turned Sand back to normal, which he did.

Catalyst was later hired to kill the family of Trey Thompson, aka Mr. America II. He was successful. Mr. America later caught him, but as it turned out Catalyst had no idea who had hired him or what was the point of the hit. The badly beaten Catalyst was arrested by the FBI.

Catalyst was later hired by an old friend of Ted Kord, the Masked Marauder, along with several old Blue Beetle II villains. The Marauder wanted to organise a strike against Blue Beetle III, assuming he was somehow related to Kord. In his view, it would be an occasion to strike at Kord even beyond the grave.

Those villains were easily defeated by Blue Beetle III, who is orders of magnitude more powerful than Kord ever was, after the usual racist crap.

Catalyst is a cigarettes smoker.

Catalyst seems to be a determined and disciplined, professional spook.

But he’s otherwise unpleasant. He’s lecherous and has multiple addictions, which he feeds via his powers. He also seems to have something of a sadistic streak, and likes choosing cruel and unusual modes of attack to finish off an opponent.

His Uncertainty is likely to be triggered by some drug’s aftereffects, or by hesitating between two or more awful drugs to make an opponent suffer.

“I shall recover the only existing sample of compound XD-3, monsieur – even if I have to devastate all of Iran.”

“I am called Catalyst, monsieur — and that pain you just felt is only the beginning !”

“Abruti ! When I touch you, you will suffer pain beyond description !”

Bonuses and Limitations:
Charisma (Interrogation) is Contingent on Fabricate and limited to human and near-human beings.

Drawbacks:
SIA toward a number of illegal drugs, MIA toward lecherousness, Uncertainty.

I originally intended to give this guy Powers duplicating exactly what he did in the comics, but I came to realise that people wanting to use Catalyst in their games are likely to do so because they have some pharmacological knowledge.

So I opted for a more generic approach to let those people do whatever they want, whilst providing examples of what he did for the rest. Though Fabricate may no longer be quite recognisable… 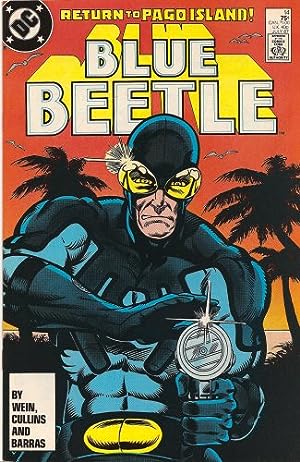 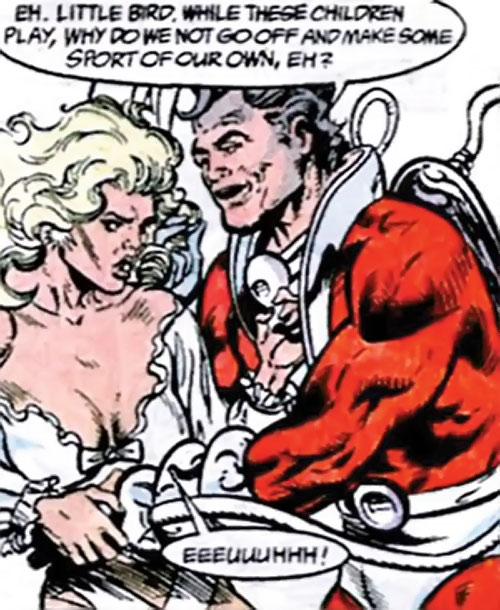 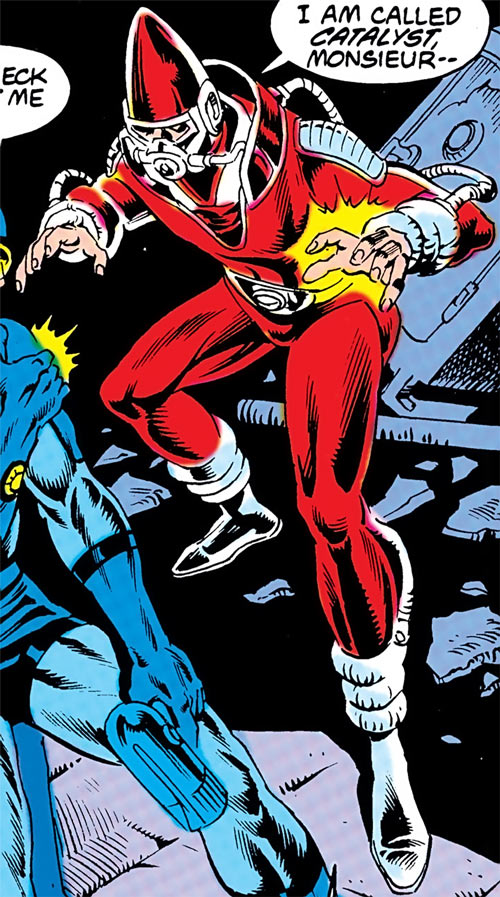 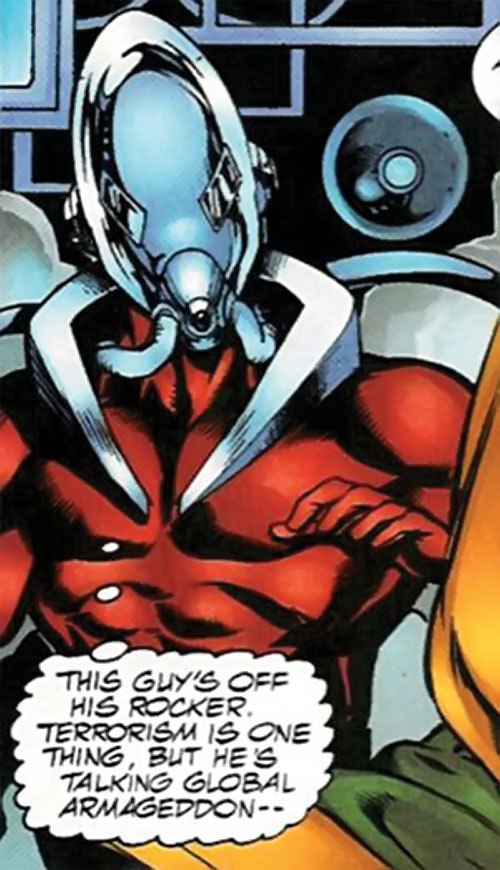 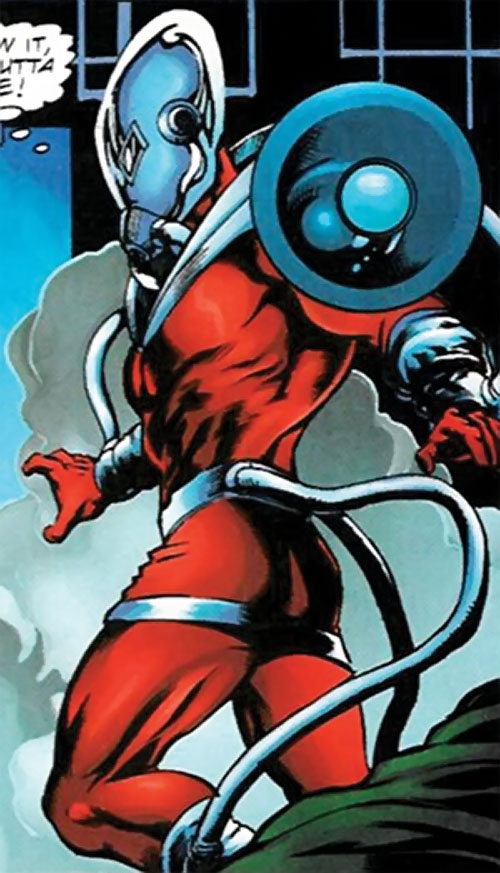 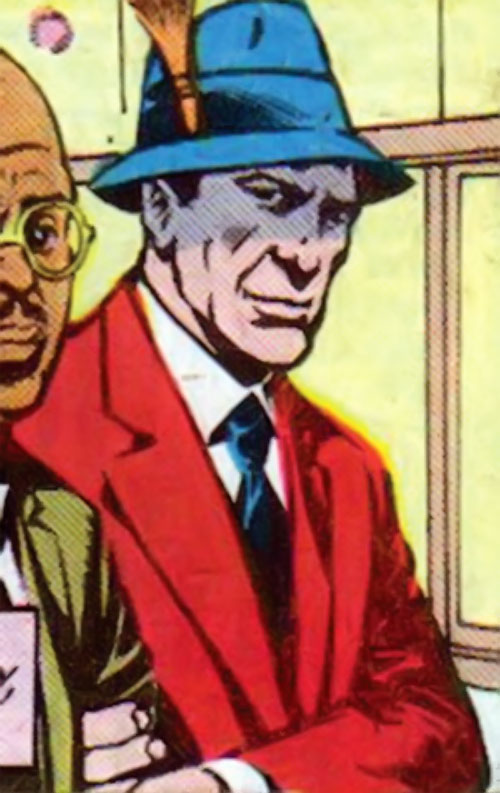