Catapult is an OK acrobat and in good shape. His Theta infection apparently results in an idealised physique, as with most other Exiles.

His power is to manipulate the potential energy within matter, including his own body. In practice, what he did was much more specific. He nullified mass, diminishing the weight of what he touched by two orders of magnitude (a factor of 100).

He could also lower his body mass to make immense jumps.

A member of the Exiles, he was plunged into a coma during the destruction of Stronghold.

Albers never woke from his coma, as his body was harvested by a mysterious alien.

Catapult was about 18, and behaved like a teenager. In particular, he was unable to grasp the seriousness of a situation, and tended to treat everything like a game and a joke.

Steve Gerber described him as “Wayne and Garth” put together (a reference to 1992 comedy classic Wayne’s World ) — a self-centred underachiever with no attention span and cultural values based on junk media consumption.

He’s not interested in anything that doesn’t directly affect him, doesn’t get that actions have consequences, and is mostly an Exile because he likes hurling large objects at stuff. Kevin pays next to no attention in school and is painfully ignorant. He doesn’t even read well.

“But where words fail, the hurtling Subaru often succeeds !” (hurls car at opponent) 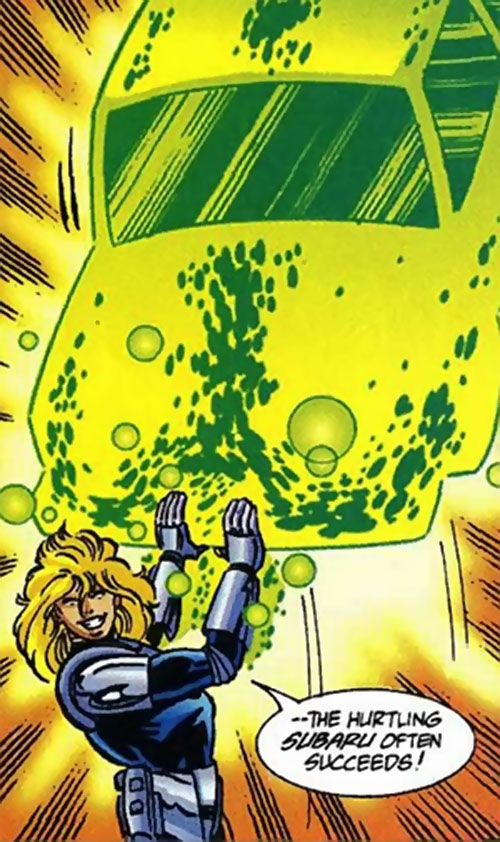