This character is specific to the The Dark Knight Strikes Again graphic novel’s continuity. It depicts a Batman of the future.

“Catgirl” is the second identity used Carrie Kelley, the Robin of that continuity. It is thus best to first read the Robin (Carrie Kelley) profile first.

Trained by the Batman, Carrie Kelly has become a good hand to hand combatant. Her training also consisted of computer generated combat simulations.

Catgirl has equipment to match her new name. Clawed gloves for fighting and climbing and some in-line skates for mobility.

Carrie Kelly was Robin in Batman: The Dark Knight Returns. After Batman faked his own death Carrie continued on as his sidekick for three more years. At age 16 she changed her name to Catgirl and donned a leopard print cat outfit with rocket skates. Batman makes her field commander and she leads his Bat-soldiers to war, making strikes on government facilities. 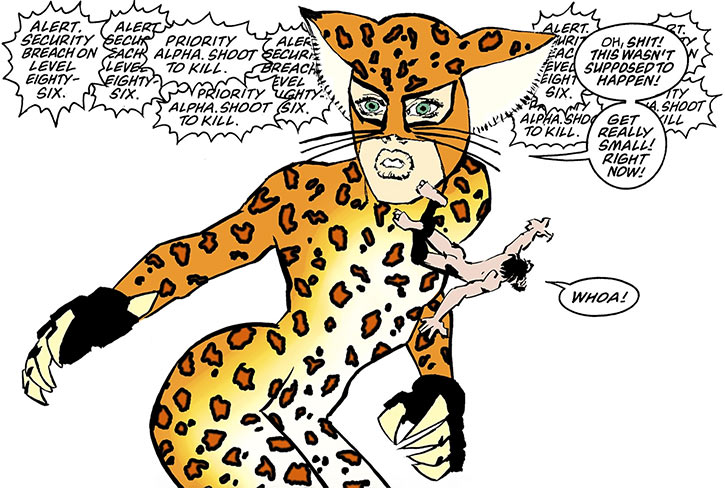 Other heroes are coerced (through threats to loved ones) by Luthor to work for him as muscle. Superman, Wonder Woman, and Captain Marvel are among them.

Their heroics ignite the populace’s imagination as they once did. Batman publicly calls for citizens to rebel against the government. Other heroes who had gone into hiding return. A new villain also appeared. Seeming nearly impossible to kill he attacked and murdered heroes including Martian Manhunter, the Guardian, Creeper, and more. 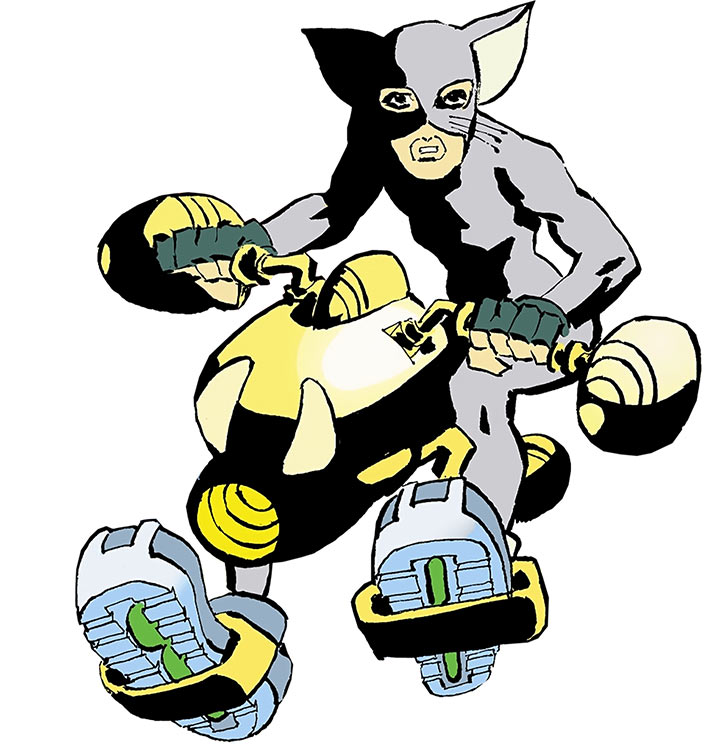 Captain Marvel, along with Superman, Wonder Woman, and their daughter fought back too. They helped Batman defeat Luthor and Brainiac.

Meanwhile, Catgirl is savagely beaten in the Batcave by the new villain who somewhat resembles the Joker with an insane healing factor! Batman recognizes him immediately. Dick Grayson! Batman tackles Grayson into a crevasse with lava at the bottom. Grayson goes into the lava but Batman is saved by Superman.

Carrie wears two costumes while in the role of Catgirl. The first, is a yellow outfit that is somewhat reminiscent of Priscilla Rich’s Cheetah costume but with long pointed ears and wiskers. She wears dark gloves with bright yellow claws for fingers and heavy boots with concealable in-line skate wheels.

When she went to Arkham she is seen with large claws on both her hands and feet to aid her in scaling the wall of the asylum.

Her second costume is less used but looks similar to the grey costume worn by the animated series version of Catwoman. With this costume she also wears drab green gloves and her skates again.

Catgirl is definitely an extrovert. She can hardly keep her thoughts to herself when around allies. When around enemies she doesn’t hold back and Batman notes that she enjoys herself in the physical confrontations a little too much. 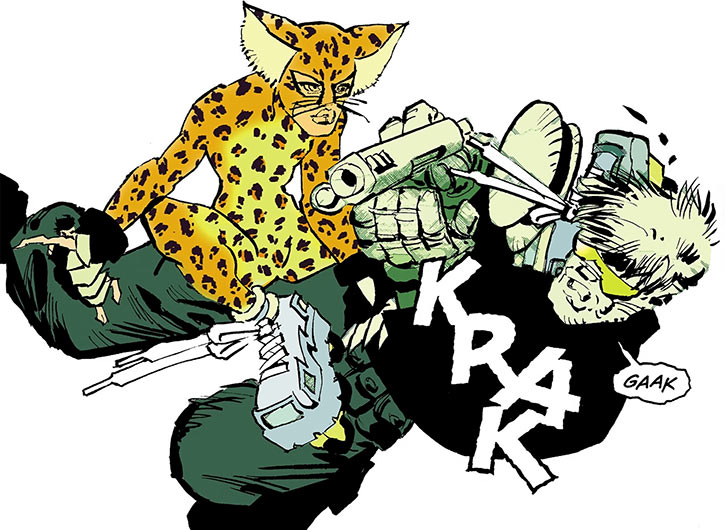 Carrie seems somewhat less confident than she did as Robin. This is probably because of the added responsibility Batman has entrusted her with and her need for his approval.

The responsibility of being the field commander of Batman’s army has brought new challenges for her. One instance of this was having to deal with disciplining the troops when they broke Batman’s rules.

She was tough and disciplined herself when needed but allowed herself to feel her emotions later. She was shown later, crying alone after the ordeal.

Carrie is cheerful and happy most of the time and after three years she has come to truly love Batman.

“Chucks give me wheels !”

“I am not toast. I’m a trained professional. Trained by the best.”

Batman: “Fire up the Batmobile, Robin.”
Catgirl: “That’s Catgirl. Get a clue.”

(Thinking of the Atom)
Catgirl: “He’s at full size and he’s still not all that big. Sure. Like only a foot taller than me.”
Atom: “Think you’re ready for tonight’s action ? It’ll be intense.”
Catgirl: “I’d better be ready. I’m Field Commander. Batboys ! Hit the battle stations ! We go opertional in fifteen minutes !”
Atom: “Batboys ?”
Catgirl: Yeah. They hate it when I call them that.”

Spike: “I don’t have to take this shit from you ! Just look at you ! I could break you in half !”
Catgirl: “Wrong again.”

“Fear is for losers.”

A 569 points Character (without equipment)

Three years after Batman faked his death, he is still using children as his soldiers. The Bat-soldiers work in assault teams of five. Catgirl is their field commander. Batman gives them their orders and they carry them out.

This is a generic Bat-soldier, worth 88 points without equipment. It’s not necessary that every Bat-soldier has every skill, piece of equipment, or advantage listed. Usually, the group will only have one omni-gadget given to the group by Batman.

I started with the Robin (Carrie Kelly) writeup as a base.

Catgirl may still have secret identity, but she freely tells others who she is and pulls off her mask without fear too. I assume after three years young Carrie has been all but forgotten and she’s bought the drawback off.

I thought about giving Catgirl Military Science (Field Command) because she led the Batboys on a mission to free Barry Allen, the Flash, and had the title “Field Commander”. However, Batman did the planning and beyond being “out in front”, the Batboys seemed to act on their own.

Writeup completed on the 4th of September, 2011. 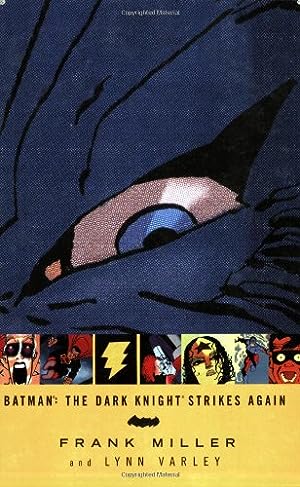 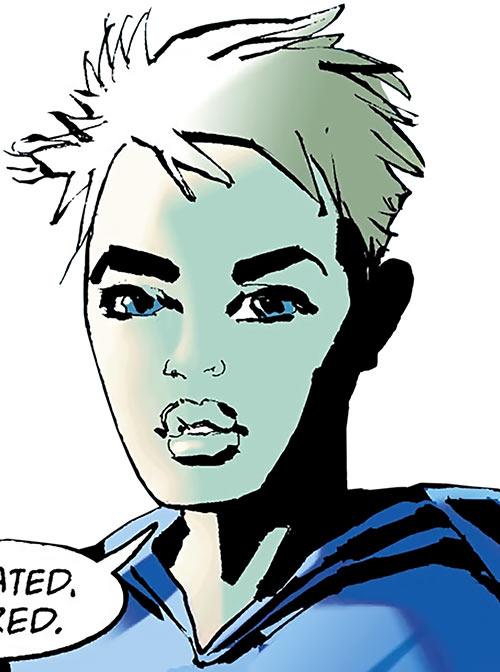 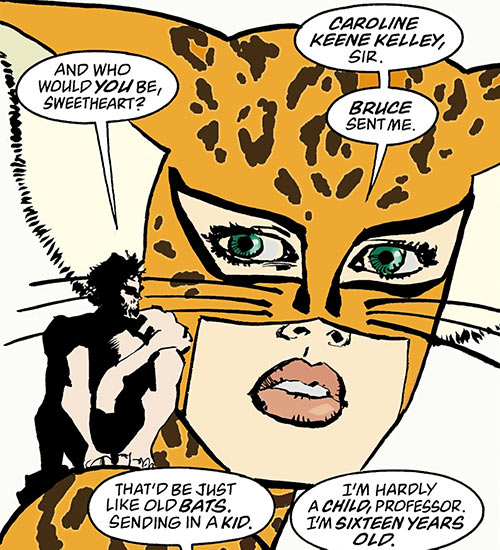 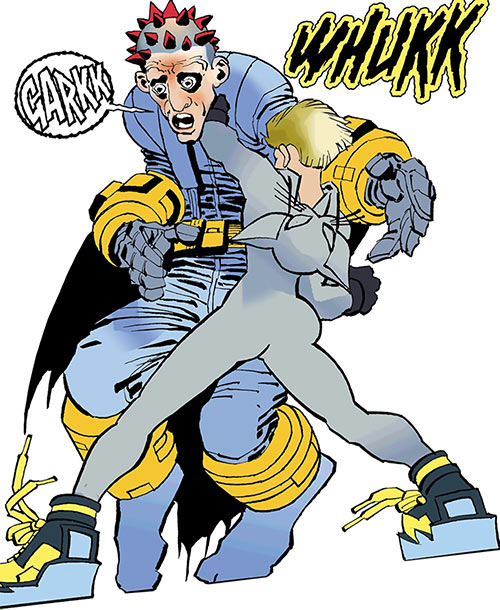 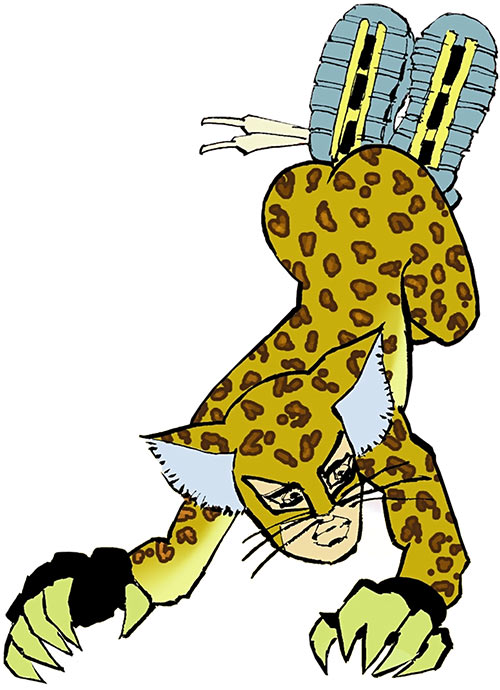 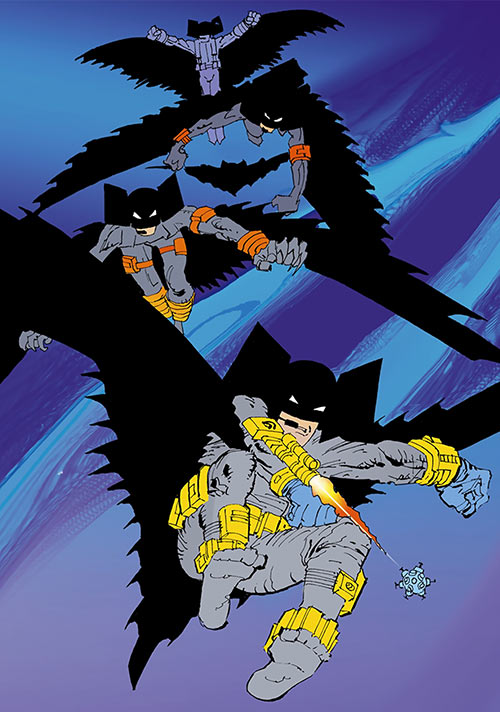