Cat-Man was one of the characters from Tem Publishing. Like most Golden Age  comic book companies, Tem had shady practices, using shell companies and the like. When it went defunct, its assets were bought by Holyoke Publishing, which continued to public Cat-Man. But the character had evolved by that point.

These here notes are very old. Back then we’d sometimes combine content from other websites, in case they’d disappear, with a stab at stats that relied on Golden Age characters being easy to quantify in broad strokes. We’ve long ceased doing that, but this approach ended up archiving content that have long since vanished from the Internet, which is good.

Catman and his partner Kitten later became public domain. One of the revival that it allowed was the version of Catman in Femforce comics.

(From the defunct http://www.wellnessadvisor.com/hoohah/vol1_no4/catman.htm)
There’s a Warner Brothers cartoon in which Daffy Duck is so obsessed with being a better showman than Bugs Bunny that he pours gasoline on himself and blows himself up. As his spirit leaves his body Bugs congratulates him on how much the audience loves it. “Yeah,” lisps Daffy’s ephemeral self, “but I can only do it once.”

The idea behind Tem Publishing’s Catman was that he could only do it nine times. Die that is.

Long before he graced his own title, got a sidekick named Kitten or was drawn by L.B. Cole, the character that first appeared in the Earth-smashing-comet-rare Crash Comics No.4 (August 1940) was supernatural in character and endowed with, right again, nine lives.

Catman’s origin story is Tarzan on acid. David Merryweather was orphaned after his family are attacked by “jungle wild men” (the story could have been called “Get The Hell Out Of Africa”). Young David is raised by tigers instead of apes.

He learns “the language of the jungle,” how to see in the dark, leap from trees, and make his ocular systems glow. In one panel his demonstrates “eyes like searchlights.”

But this is a truly original origin, for in it Catman dies, clumsily allowing himself to be stabbed in the heart by the villain.

But wait— “the spirit of his guardian reaches the Catman as he dies. Members of the cat family have nine lives. Bull Jackson [no, not blues singer Bullmoose Jackson of “Big Ten Inch Record” fame] took one of them. His guardian angel, in the form of the old tigress who mothered him, gives him the second of his nine lives !”

How many times could he do that ? We don’t know, but it couldn’t have been more than eight. In the end he either never used them up, or the writers simply abandoned the concept.

Crash Comics was retitled after issue No.5 as Catman Comics in May 1941. It hiccuped, along until August 1946. Among the magazine’s most notable parts include the character Voltron by Joe Kubert, and other strips with art by Bob Fujitani, Rudy Palais and covers (and some interior) by L.B. Cole.

The Catman story was reprinted—in 1945 in Holyoke One-Shot No.3, also tough to find.

He wears a black mask that covers the top half of his head, like the Golden Age Atom’s second costume. However, instead of a fin, he has little cat ears. He has long, yellow, furry, paw-like gloves. He wears a green sleeveless toga-like “shirt” that only passes over one shoulder.

“I’m going to show you a few fighting tricks I learned in the jungles !”

His powers could easily be tied into the DCU’s Catman’s cape. He could also be the inspiration for the Catwoman or other animal-based heroes. His powers might even tie into the morphogenetic field. 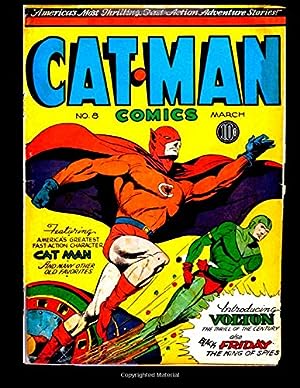 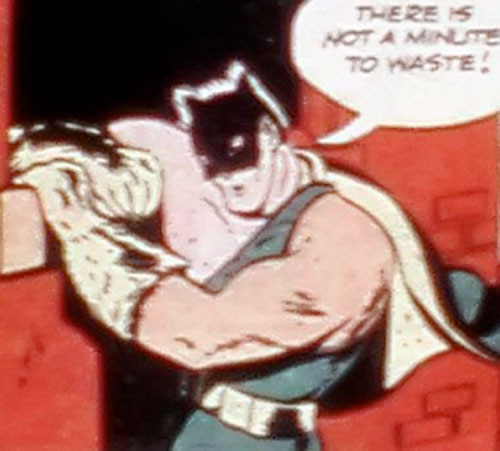 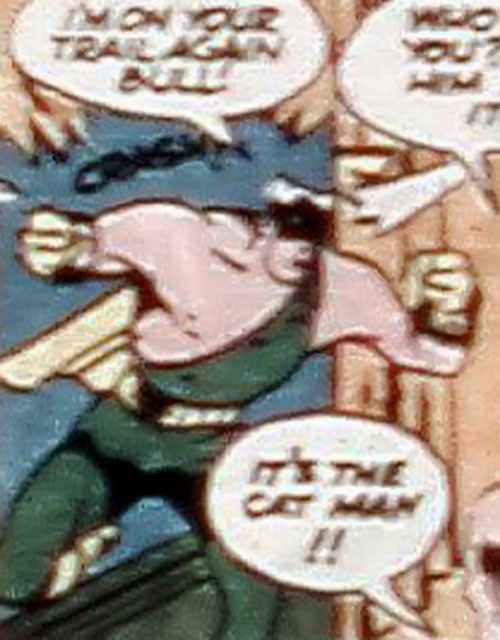 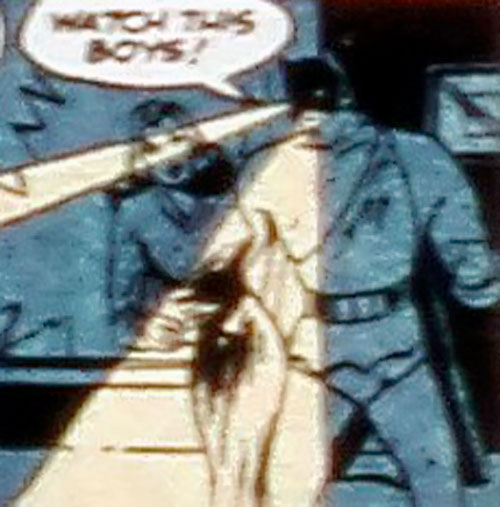