Catseye can rapidly shift to a feline-like form.

This alternate form is quite dangerous – supple, fast, ferocious and fiercely clawed.

She could move quickly even in inverted positions, clinging to the ceiling — and attack by surprise from such a position.

Catseye is know to have a superhuman sense of smell. She can recognise smells like she would recognise faces. Whether she has other feline senses is unknown – see our Animals File for DC Heroes scores for various felines if you think she does.

Emma Frost’s notes describe Catseye as exceptionally intelligent and gifted with total recall. This was reflected in our DC Heroes RPG stats, even though there’s no clear indication of this outside of Frost’s notes.

Frost also indicates that Catseye went from complete illiteracy to reading proficiently within less than a year.

A kind of Magik

During her first appearance, Catseye appears to be hit by Magik (Illyana Resputin)’s Soulsword.

By this point, that blade has already been firmly established to only affect magic and magical beings.

The three main possibilities to interpret this are :

See our “base camp” entry for the Hellions (Massachusetts Academy).

From Frost’s research, Sharon Smith is an homo superior mutant. But she became able to use her powers well before puberty, perhaps even at birth. She was abandoned as an infant in Manhattan and grew up as a feral person.

Sharon chiefly ran with stray cats. Presumably, as a little girl, her feline form was about house cat-sized. The cats treated her as a peer, and a female even served as a surrogate mother.

It has been speculated that Catseye might be some sort of mutant cat able to adopt a humanoid form. But Frost’s teams always describe her as homo superior.

Whether they were able to determine who her parents were, or the name “Sharon Smith” had to be made up, is unrevealed.

During her teens, the mutant was detected and scooped up by Emma Frost’s teams at the Hellfire Club, to become one of her Hellions.

Frost forced the feral Smith to act as a human being and generally stay in her human-like form, gradually adopt a diurnal life cycle, talk, behave like a human, etc.

The exact look, mass, limbs shape and prehensility, and apparent strength of Catseye’s feline form has greatly varied from artist to artist. Though at first it seemed possible that it was an effect of maturation, the variance is simply too great.

Perhaps Catseye’s exact form varies depending on mood, moon cycles or whichever. Or perhaps she can deliberately adjust it a bit when morphing. 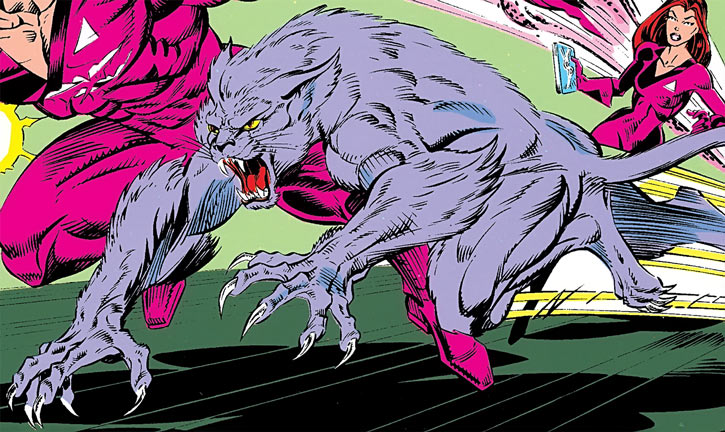 One hypothesis is that the more humanised-looking forms are reached by not morphing all the way through to an animal shape. But that doesn’t explain why she can look panther-like, cat-like, lion-like or lynx-like depending on the artist.

Catseye was visibly uncomfortable in her human body. It felt alien, ugly and clumsy. Said human body is rake-thin, giving the impression she eats very little in human form.

Like her feline body, it shows constant variations – tail or no tail, eye colour and structure, hair colour, etc..

Her personality was that of a free spirit. Catseye’s youth and lack of sophistication hid considerable intelligence.

She rapidly learned English, but mostly used made-up words with a sing-song quality. Numerous quotes are provided to help get a feeling for Catseye’s peculiar speechway, yes ?

Although Catseye was mostly a nocturnal feline predator, Frost insisted that she be regularly active during the day and in human form. Catseye was uncomfortable doing so but was, like other Hellions, highly loyal toward the White Queen (whom she called “Missy”). 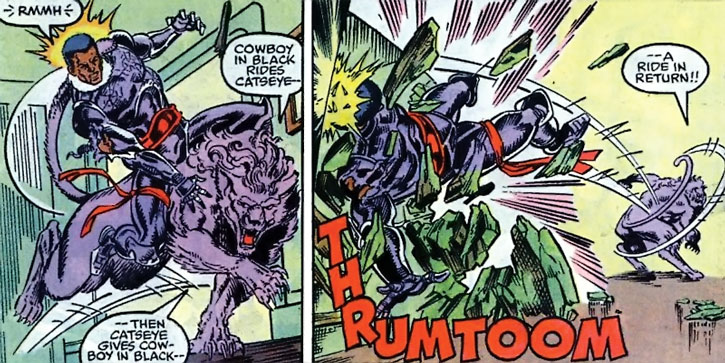 Frost imprinted herself as a new surrogate mother on the still-feral Catseye early on. But Catseye feels about Frost like a kitten does toward its mother, not like a human child toward their mum. Catseye called the Mass. Academy the “happyplace” and didn’t want to leave.

Catseye felt great empathy toward other “furpersons”. This seemed to be a very broad category. She treated them pretty much like close brothers and sisters. She’ll likely act very friendly toward anybody who can adopt a furry animal form, unless they smell particularly wrong.

Thus Catseye immediately became a friend of Wolfsbane (Rahne Sinclair). She usually wanted her to ditch her clumsy human form and have fun with her romping around.

Being a fairly young feline, she enjoyed romping around and playing. With her predatory instinct, she occasionally “played” by chasing terrified Hellfire Club maids around the property, like mice.

Catseye enjoyed being outdoors to run freely and chase things. She was a young, energetic feline who wants to have fun. 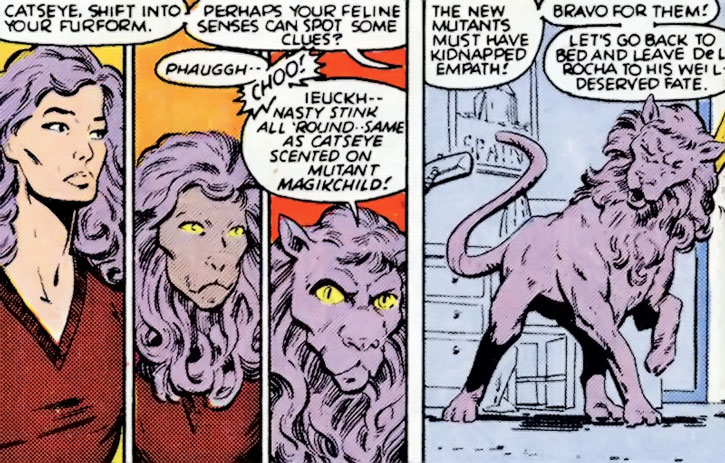 Catseye seemed oddly fearless. She took paranormal events in stride without any hint of being scared. She occasionally had to be restrained from meleeing people far more powerful than she was. She once had to be prevented from pouncing on Magma, despite Magma being obviously on fire.

In a fight, Catseye was generally tough and unhesitating.

Catseye considered the New Mutants, and particularly Rahne, as her friends. She rejected the Hellfire Club politics making the Mutants her foes.

This completely disappeared when she became a transmode revenant, though. In this version she’s just a cruel, hungry carnivore.

(After Jetstream and Cannonball flew in through a wall) “Sillynoisies like fuss — crash bash mess show-off ! Redfur come with Catseye — run and howl and play — feel great soon, promise !”

Bonuses and Limitations:
Thief (Stealth) can be used along with Cling (+0).

During Catseye’s early appearances, her DEX and STR in her feline form were both a 06, and her Claws had 07 APs.

This feline form seemed to weigh about 120-140 lbs., and was thus significantly less massive (and less panther-like) than the feline form seen in 1991.

The stats correspond to the 1991 form.

As a transmode revenant, Catseye seems closer to her 1980s form in term of shape and mass. But which set of stats she uses is unknown.

Early on she had Kinetic Absorption (Structural only) instead of Skin Armour.

In various scenes Sharon’s humanoid form is seen with a tail. Flashbacks also depict her with cat ears on top of her head, or clawed fingers.

This is not surprising, since Catseye seems to have fine control over partial transformations.

The in-game impact of these features is undocumented. It is possible that she might have 3 APs of Claws and/or Extra-Limb even without activating her Alter-Ego.

The cat ears were probably just artistic whimsy, but they might be useable for Super-Hearing and/or Directional Hearing, presumably at 3 APs. 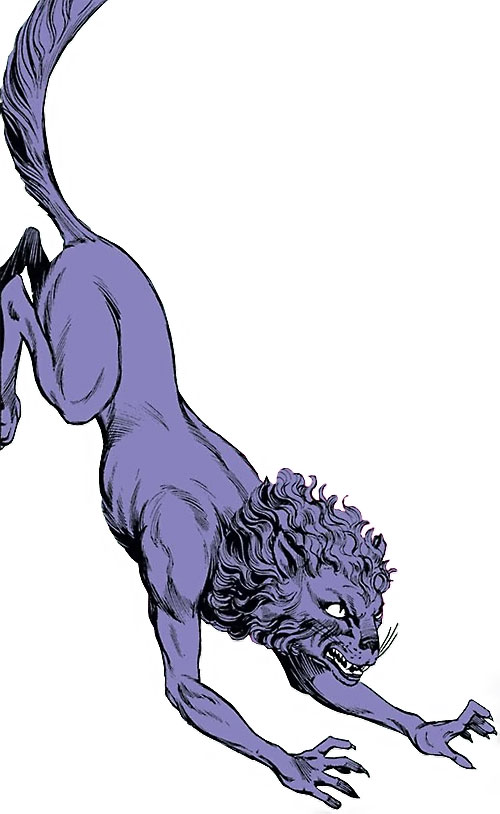 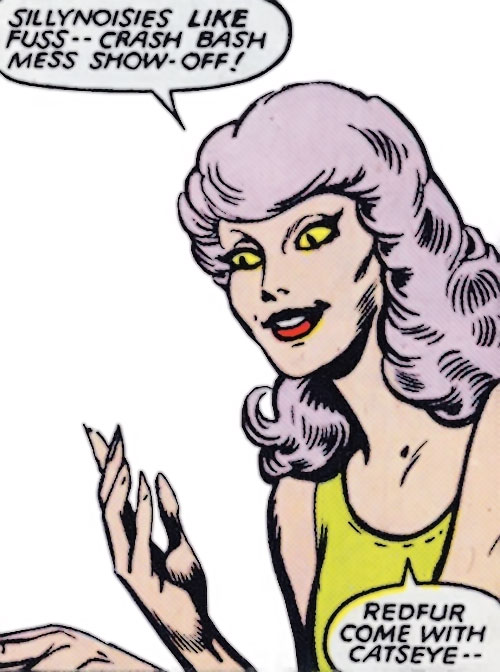 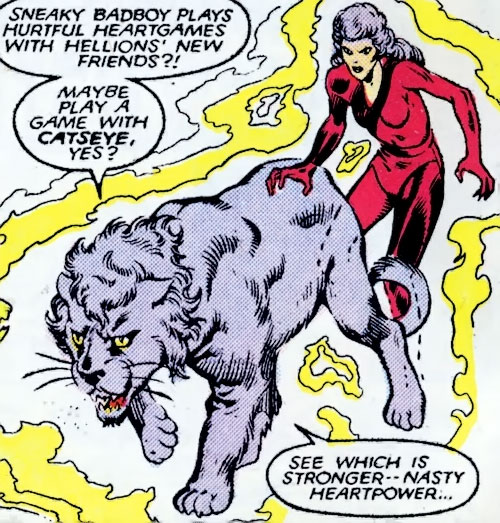 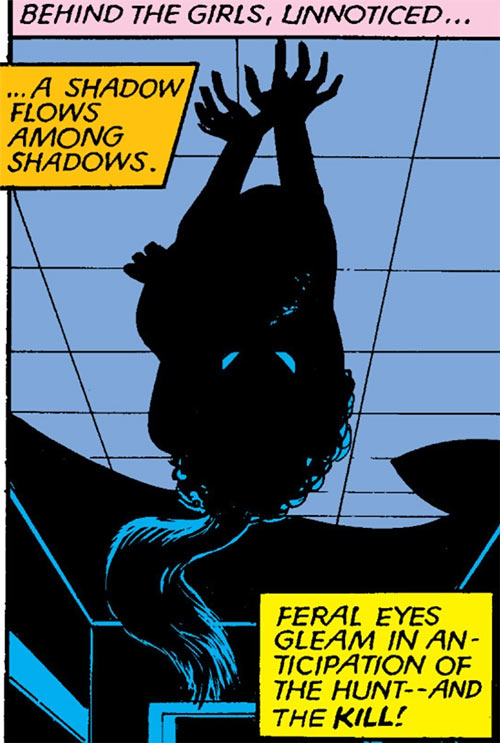 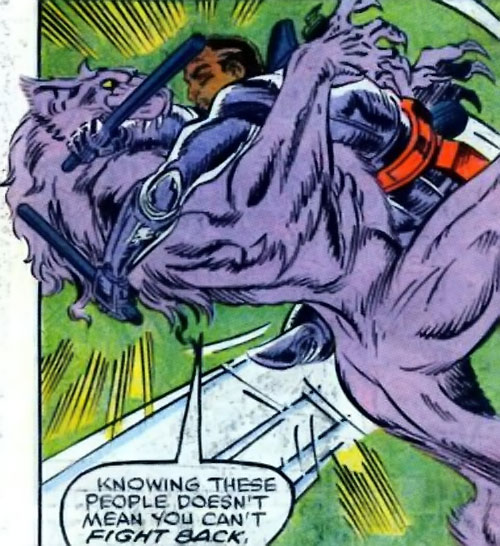 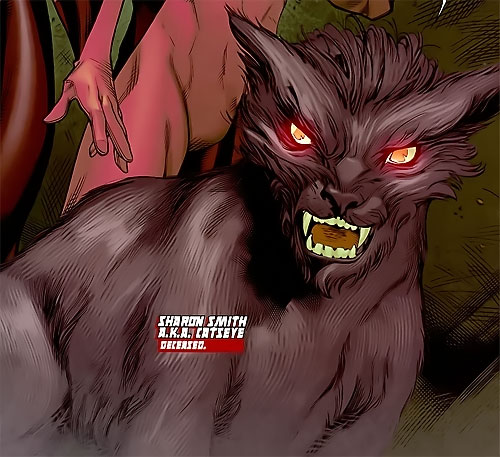 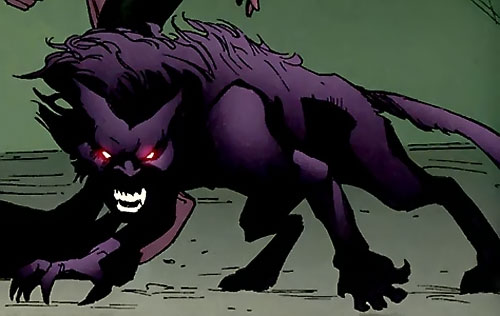