Our notes were taken not too long after this series. So of course they do not include the material from the SKK’s unexpected return in 2008/2009, during the Secret Invasion.

This entry is best read after the character profile for the Skrull Kill Krew’s leader Ryder, which has the context.

Like the rest of the Skrull Kill Krew Kim has shapechanging abilities. Since she still is new to the game she has yet to develop the full array of abilities. Catwalk is currently is limited to telepathic communication and changing into a powerful catlike creature.

Like the rest of the Krew she can automatically see through the disguise of any Skrull .

Having a career behind her as a supermodel grants her expert modeling and make-up (yeah, she apparently does this herself) skills. This also makes her rather rich (though she no longer has any income) and she’s the only Krew member who can raise money easily via her savings. She can move with professional elegance and grace although her foul talk can dampen the effect.

Her life with the Krew has taught her how to use weaponry and she has got a driver’s license.

See the write-up of teammate Ryder. In short : Catwalk used to be one of America’s greatest supermodels. But she got infected with the lethal brain eating alien virus which also gave her powers.

After having been told the predicament she’s in she was the fifth and last recruit of the Skrull Kill Krew (the others being: Ryder, Moonstomp, Dice and Riot). Catwalk continues as a full time member of the Krew hunting and killing Skrulls around the globe.

Kimberley alias Catwalk was, as the name implies, a famous supermodel. As such she is very attractive and in her case, quite young. Catwalk very often changes her wardrobe and always appears in something new and inspiring. As a model she’s quite thin (although not overly so) and tall. Her eyes are blue and her long, straight hair usually either green or pink.

She enjoys make-up and mostly uses cool colors such as blue for lipstick. The clothing is always of designer labels and worn in a fitting theme and mixture. Simply put, she looks nice and elegant.

During her days as a supermodel she’s bored and arrogant. She whined a lot and appeared to be a glory hound. Since she joined the SKK she’s toughened up and doesn’t whine (although she still talks in tough words sometimes).

Like most other women she’s attracted to Ryder, but becomes angry when someone speaks of this with her. The reason for this is that she still holds herself very high. She wouldn’t involve herself with “a cheap redneck like Ryder” as she herself puts it.

Temper tantrums are common for her as is criticizing and nagging. During combat, however, she can be quite useful in her feline Catwalk form and prefers to act instead of talk. Catwalk is on quite good terms with everyone on the team except Riot with whom she’s having some friendly rivalry and competition.

“Look, I’ll do it ! I hate kids anyway. I’ve been looking for an excuse to kill some for years.”

Well, Skrulls aren’t a big part of the DC Universe. And since Catwalk’s origin is closely related to their existence you just can’t insert her as she is.

Unlike the rest of the SKK she’s not very obsessed with killing Skrulls….just bored. She could easily go back to her modeling career even with the superpowers, but that’s not very probable since she’s dying.

A DC version might be to either add the Skrulls as an entire race or swap their part in the SKK’s creation with the Durlans or White Martians… That would probably work with the SKK as a whole.

Notes:
Catwalk eventually can develop Thermal Vision, Invisibility, Teleport and Regeneration like her teammate Ryder already has done. As well as the common Stretching and Self-Manipulation abilities that the rest of the team possesses. 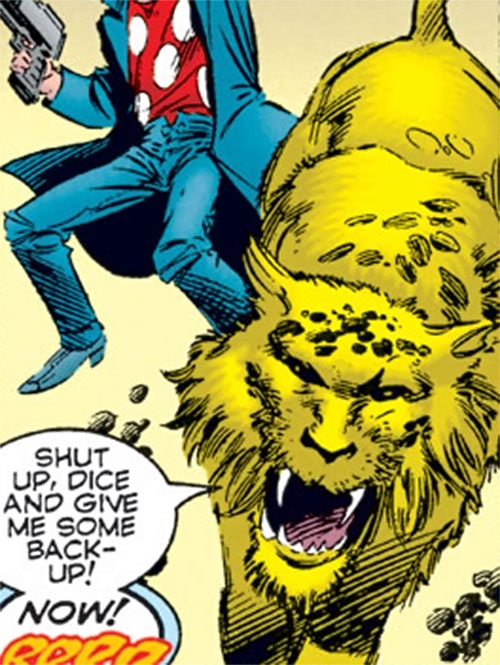