This is the second half of our 1940s Catwoman character profile. Since discussing the entire decade in one go ended up being slightly above our article length cut-off point.

Obvs, it is meant to be read after the first half.

For more Catwomansomeness, see our guide to our Catwoman character profiles.

Since the stories have loose continuity, they’ll just be recapped one after another. Without connective narration.

The Cat is after Mrs. Travers’ invaluable necklace. Disguised as a nice little old lady, she infiltrates a yachting party thanks to Mrs. Travers’ crooked nephew.

The theft goes swimmingly. Batman and Robin even stop rival thieves. However, the Dynamic Duo then exposes the elderly “Miss Peggs” as the Cat.

The Batman refuses to become her associate in crime, but is smitten with her. He lets her escape as they reach Gotham – so the Cat doesn’t go to prison. This bit is reminiscent of Zatara and the Tigress. Holy comely feline ladies, Batman !

The Cat Woman is after the same gem as the Joker. Batman spots her whilst she is spying in disguise on the Joker’s mob. But he lets her go in return for the location of the Joker’s hideout.

The Cat Woman has already vamped the gem’s owner, but the Joker moves in and kills the mark. As the Joker threatens her at gunpoint, Robin comes in since he’s tailing (so to speak) the Cat Woman. The Joker defeats him, but the Cat Woman offers the gem in return for Robin’s life.

Batman then comes in, and the Dynamic Duo plus the Cat Woman escape a raging blaze in the Batplane. At the last moment, The Cat Woman flees with a daring dive into white water. 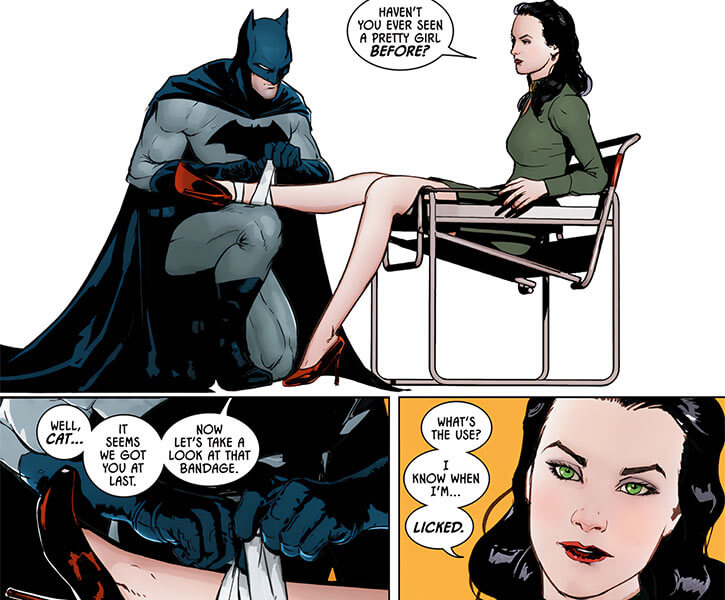 The Cat-Woman is hired by crooked diamonds dealers to steal their most valuable pieces. She infiltrates the next jewellery show by posing as a model. The Cat-Woman makes her escape with a fortune in diamonds.

However, one of her two employers double-crosses both The Cat and his associate. He attempts to kill them both to get all the loot. But Batman and Robin arrive in time to save everyone.

The Cat-Woman escapes by kissing Batman, suddenly shoving him away, and stealing a getaway car.

The Cat Woman really is Marguerite Tone, a bored and single Gotham socialite. She became a thief as she craved thrills and danger. Somehow, Batman never recognised The Cat-Woman as Ms. Tone.

Tone, whose parties are prized by the Gotham high society , organises a citywide scavenger hunt. It serves as a cover for her accomplices to steal a bunch of valuables.

Batman foils Tone’s next plan – a costume party allowing a bunch of thugs to impersonate Batman and steal more valuables. But he lacks proof to arrest Tone.

The tigress queen of crime’s next plan involves thugs trained to become impeccable manservants. These infiltrate rich households. Ms. Tone’s lost-and-found agency then makes bank returning the goods stolen by The Cat-Woman and her inside men.

In the end, Batman stops an irate criminal from shooting the Cat Woman. She kisses the Caped Crusader as thanks – then escapes in the confusion.

The Cat returns as Elva Barr, a working class beautician.

This cover allows her to craft a lifelike mask of a rich client, and record her voice. The Cat Woman thus infiltrates and robs a society marriage. But the Batman is wise to her and takes out her henchmen.

Before the Batman lets the Cat escape, she confesses a crush on Bruce Wayne, whom she recently met as Barr. Wayne and Barr have a whirlwind romance and are soon engaged. However the wary, wily Cat Woman discovers that it is a ploy to reform her.

Furious, she returns to her criminal ways. But the Dynamic Duo arrests her as she and her men are stealing pedigree dogs at a show.

The Cat-Woman escapes from prison, then seduces a number of butlers as “Belinda”.

That allows her men to commit extraordinary robberies within these households.

She even seduces Alfred Beagle, and has him knocked out by her men. But her robbing of the Wayne manor ultimately fails. She is arrested anew.

(Alfred Beagle was a sort of prototype for Alfred Pennyworth. But though he also looked like an archetypal butler, his personality was quite different.)

The Catwoman escapes after hypnotising a prison matron. However, only two of her henchmen still agree to follow her. The others know that working for Cat Woman means running into Batman.

With her two loyal men, the Catwoman tricks the deserters into thinking that she has mystical powers giving her nine lives. Criminals are a cowardly, superstitious lot !

The Batman prevents the Catwoman from commandeering a blimp carrying diamonds. She accidentally falls to her seeming death, but survives through sheer luck.

She then conducts desperate thefts, where fate conspires to keep her alive against all odds.

Eventually, she seems to die in another accident when clashing with Batman. But even the Caped Crusader now wonders whether the Catwoman truly had nine lives.

These stratagems allow for major thefts. But Batman and Robin eventually arrest her, and return the beloved kitties.

During the case the Catwoman prevents a thug from shooting an unconscious Batman, but our heroes never learn about that.

Unlike Batman, her targets do not take her seriously – and soon come to regret that. The Catwoman uses a black Caterpillar  tractor, then a circus’ black panther, then a black catboat to strike at her targets.

She keeps evading the Dynamic Duo.

Robin chases her atop the Statue of Liberty (which clashes with other Golden Age depictions of Gotham City’s geography), but is knocked out. The Catwoman captures the youth so he won’t fall to his death.

Yet Robin manages to signal Batman, who arrests the gang. Catwoman narrowly escapes.

In prison, Catwoman receives a book where some pages are secretly laced with explosives.

After she escapes, she launches robberies that hinge on references to cats in folk tales and literature.

The Catwoman stays ahead of the police and the Dynamic Duo for a while. But she’s eventually captured. Atop a giant prop, of course. 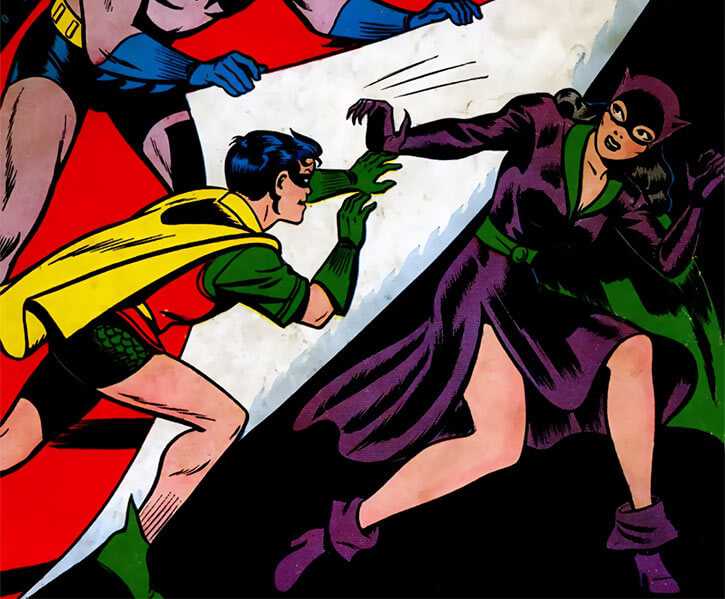 At this point, a book about the most infamous women in pop history is a big hit. Annoyed that the work doesn’t mention her, Catwoman repeatedly robs attempts at turning the book into a play or movie.

She steals valuables each time, despite the Dynamic Duo’s intervention. But they eventually nab her.

In prison, Catwoman is visited by the successful writer, who wants to make his next book about her.

After her pet kitty helps her escape, Catwoman creates Damsel, a successful women’s fashion magazine. She runs it under a cover identity, as the sophisticated Madame Moderne.

Damsel is a way to approach wealthy fashionistas and steal terribly expensive stuff. There’s no special theme, beyond that Catwoman is a girl and girls have clothes.

Catwoman walks away from the first such heist with a $115K mink fur coat (in 2018 USD) and another stolen kiss from the Batman.

Eventually Batman deduces that Catwoman is Madame Moderne (because a drawing she did uses fashion art proportions, see). There’s a fight in a room full of giant props. Catwoman is arrested.

The main variation during this decade is the mask.

From late 1940 to 1946 Catwoman wears a realistic cat mask. In poor visibility, an impressionable person might think that she’s some sort of chimera  . This is eventually dropped as the cowl appears, though it still has decorative cat-like ears.

Otherwise, Catwoman’s outfit is simply a dress. Early on it’ll be an orange or green cocktail number. But it evolves toward a purple, more robust type of dress. By 1947, her outfit closely resembles what will become the signature pre-Crisis Catwoman outfit.

The dresses often show a small bit of cleavage – in a somewhat risqué manner by 1940s standards. It’s more akin to what an actress would wear.

As the cat head mask disappears, Catwoman starts getting depicted as keeping a number of house cats in her safe houses. This eventually settles to a single pet, a black-furred kitty named Hecate. But the witchy symbolism is never used.

Her movements have a distinct catlike grace, and even her voice has a smooth and purring quality. Though she’s not a fighter, her sudden moves to escape or shove somebody away strongly evoke a pouncing puma. Holy perfidious pouncing pumas, Batman !

Catwoman frequently changes her hair colour (sometimes from panel to panel, heh). It’s not until mid-1947 that her hair reliably becomes black. 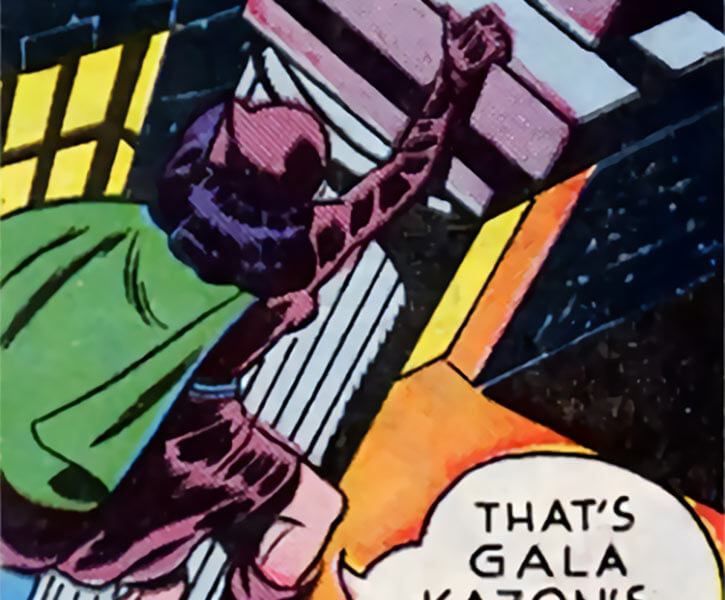 Not really, as with most Golden Age characters. The cat motif randomly comes and goes.

Sometimes there’s an emphasis on typical Greatest Generation “ah ah ah women, am I right ?” stuff. Such as Catwoman being vain and/or jealous. But that, too, haphazardly comes and goes.

There is sometimes a stronger, more interesting depiction of Catwoman. But it — all together now ! — randomly comes and goes. Its two main characteristics :

Early on the Batman and Cat Woman have a clear chemistry and interest in each other. But stories become more black-and-white, likely due to moralistic pressure. Thus, this aspect disappears, as Batman cannot love a criminal.

In the weaker stories she’ll try to convince him to switch to her side (with a profound lack of results). In other stories she harbours no illusions about Batman seeing her as just one more crook. In yet other stories, she just thinks men suck and Batman ain’t any better, and will try to harm him and/or Robin.

“’Well… what’s the matter ? Haven’t you seen a pretty girl before ?”

“Try to double-cross me, will you ? I’ll scratch his eyes out !”

“The Batman ! Well, I knew I’d cross his path again sooner or later… and you know… I’m rather looking forward to another duel of wits with him !”

“How brave and strong he is ! If only he would team up with me — nobody would be able to stop us !”

“Our first job will be hijacking a cargo of industrial diamonds being shipped by dirigible !” 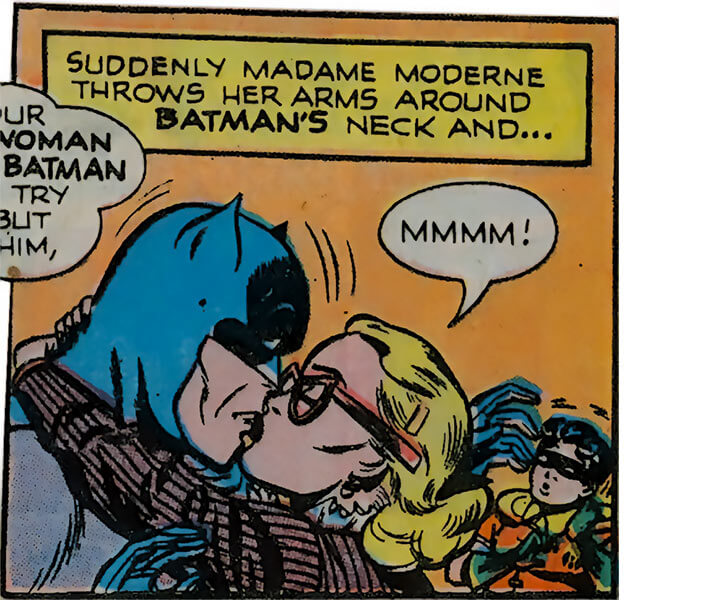 The baseline stats represent Catwoman at her least remarkable. In most stories, she gets “add-ons” that will serve as her gimmick(s) for this issue, but will likely never be seen again.

Ultra-vision is Form Function, but only improves her low-light vision (and adaptation) over the average.

Luck is only usable to avoid grave bodily harm.

Her Thief skill is deliberately broad. The idea is that she’d likely have demonstrated any Thief Subskill needed for the story to take place.

She didn’t actually demonstrate Escape Artist, Forgery or Security Systems during this era.

Ditto for the Weaponry. Those she demonstrated are Firearms (handguns only), Missiles (thrown stuff only) and Melee (flexible weapons only).

Question – tell me what you think about me…

The Gamemaster can add a few “plug-ins” to this baseline if the story is to feature a more distinctive, more capable Cat Woman. For old times’ sake let’s have a random table, eh ? 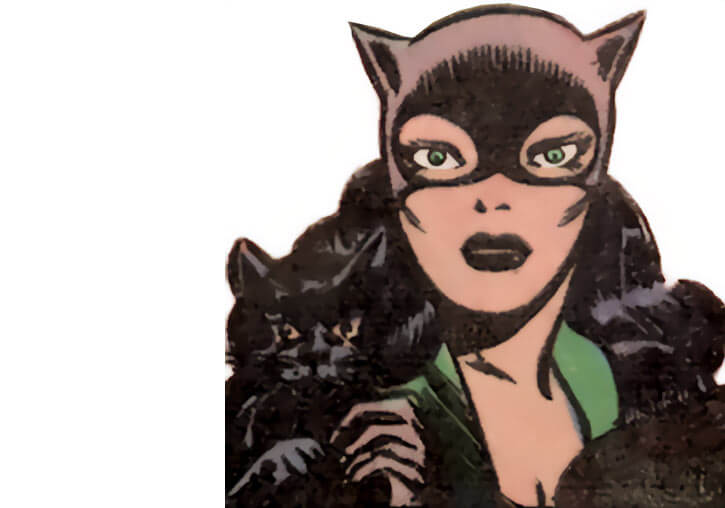 Try to control me boy, you get dismissed

The cat-shove (unexpectedly pushing somebody away) is 6 APs of Stagger, with the following B&L:

Yes, it *is* a bit on the nose, but I thought fully modelling it would be funny. Also, it’s not actually called the cat-shove in the stories – I just needed to call it something for this article.

The rock I’m rockin’, I stole it

Here are Gadgets (not mere Equipment) that the Cat Woman uses during the 1940s:

The Cat Woman is usually under the effect of a Genre Rule forbidding women from engaging in genuine combat. The one exception is Blindside Attacks with a heavy object of opportunity.

This starts getting relaxed during the second half of the 1940s. Women can now shoot handguns (usually in low calibres) at opponents. But they are forbidden from using Hero Points when so doing.

They also become able to to indirect attacks such as Trick Shots and disarming. Spending Hero Points on such is usually OK, subject to patriarchal GM approval.