Just Imagine Stan Lee Creating (fooTraditional placeholder name for a variable.) was a series of one-shot DC Comics books in 2001. All were written by Stan “the Man” Lee  , with artwork from fan-favourite artists.

The angle was to show what would have happened if Stan Lee had created a super-hero universe with characters named “Superman”, “Batman”, “Wonder Woman”, etc.. These characters resemble the DC ones, but clearly have a different style.

So that’s def useful to populate home-designed role-playing game worlds, if you need archetypes with a twist.

if you were looking for other versions of Catwoman, see our guide to our Catwoman character profiles.

This continuity still exists in the DC Multiverse. After the Flashpoint events, it became Earth-6.

She sees in the dark, and she can turn her fingers into huge claws. These can easily punch through a reinforced door, cleave through a handgun or inflict nasty gashes to solid steel walls.

Catwoman is superhumanly supple, barely tires from physical effort, can jump across an entire street, and always lands on her feet. She is amazingly fast and mobile, and moves in almost complete silence. For most people, Catwoman is just an indistinct black flash. 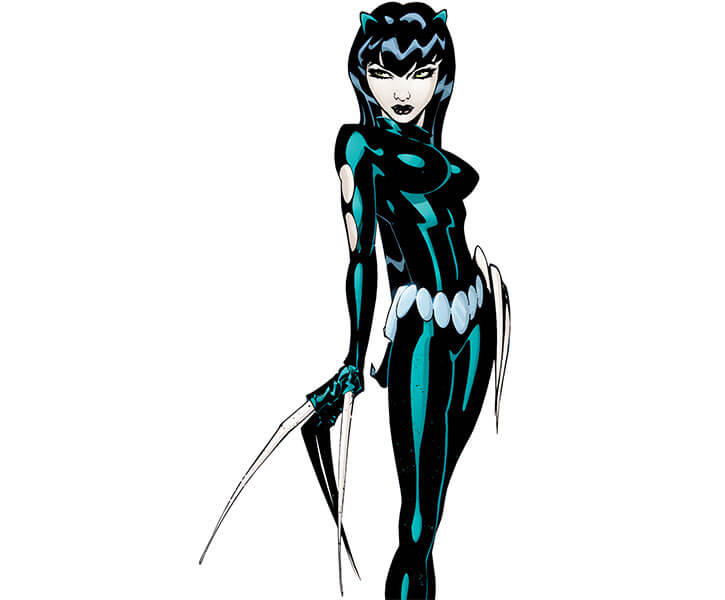 WisenheimerA smug know-it-all. model Joanie Jordan was scheduled for a photoshoot within a major bank.

This potential security breach attracted the attention of a group of criminals working for the Flesh Crawler. Their plan was to kidnap Jordan in her home, force her to pass them for authorised persons at the shoot, then kill everyone inside and rob the bank.

Overhearing the “kill everyone” part of the plan, Jordan tried to fight off the careless gangsters in her apartment. Right as she did, a lightning strike cut the power, killing the lights.

Jordan then benefited from something else entirely. As she reached the window under cover of darkness, a green lightning ball crashed onto her and her pet cat.

The strange energy instantly gave her cat-like superpowers, with which she killed the armed murderers in her flat.

Nigh-simultaneously, other people throughout the world were empowered through other manifestations of green energy. As with Jordan, some transformations involved animals. Examples include the Flash (Mary Maxwell)’s abilities being catalysed by hummingbird DNA, and Aquaman (Ramon Raymond)’s ones by dolphin DNA. 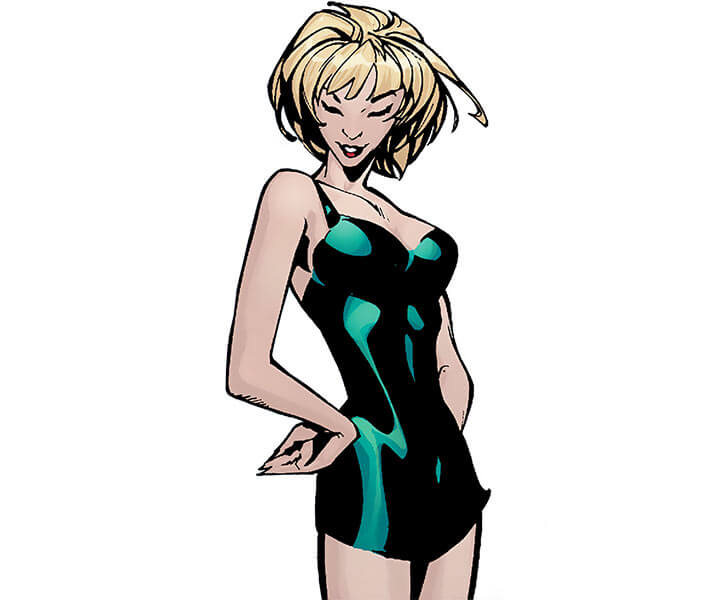 Joanie was absolutely thrilled with her new-found abilities. She quickly created a costume and an identity for herself.

As Catwoman, she gambolledRun or jump about playfully. over rooftops at night for fun, and found herself intervening to save lives because it felt good. In particular, she starred in the rescue of several persons during a major fire.

Jordan hoped to share her secret with her father. A retired police detective, he had always wished that his daughter had been a policewoman rather than a model.

But as it turned out the older man was quite hostile toward the free-spirited, violent rooftop vigilante. Joanie decided to keep her secret.

While trying to prevent a theft at a museum, Catwoman witnessed the creation of the Justice League by Wonder Woman (Maria Mendoza). This was to respond to the arrival of cosmic entity Crisis, who sought to conquer their universe.

The League narrowly prevailed, though like most members Catwoman was out of her depth.

In the aftermath, the team agreed to reassemble whenever needed.

Joanie is a wiseass. She is too smart for her job, bored, snarky and catty.

On the other hand she loves being Catwoman, and thinks her powers and the rush she gets from using them are awesome.

Catwoman will happily demonstrate her incredible speed and agility whenever possible. She’ll run rings around her opponents, ricochet off the walls and bounce left and right faster than the untrained eye can follow.

She is a showwoman, and likes making cool entrances and exits, striking poses, being all mysterious, showing off her prowess, coming up with one-liners – and the like.

Catwoman mostly adventures for kicks, but she’s not a bad person. Though she’s self-centred and spoiled, she loves the glow of rescuing people and being acclaimed for saving lives and stomping crime.

Joanie also feels good knowing that she is, in her way, continuing the work of her retired father. She also thinks that his rants about Catwoman being a menace are pretty funny.

Ms. Jordan has no moral inhibition against killing – and her huge claws make killing fairly easy. Catwoman does not endeavour to slay anybody, but does not make any special effort to prevent garden-variety thugs from being killed by her Claws, either. In her opinion, they were asking for it anyway.

Her paranormal bond with her beloved pet cat is strong. She considers Ebony as a sister.

A highly independent person with a high opinion of herself, she does not like being told what do do. At all. Now that she knows that she can kick seven shades of butt without breaking a sweat, this trait is even more pronounced.

Even as Joanie she will give lip to people holding her at gunpoint, or use her beauty and fame to have policemen on duty look the other way. 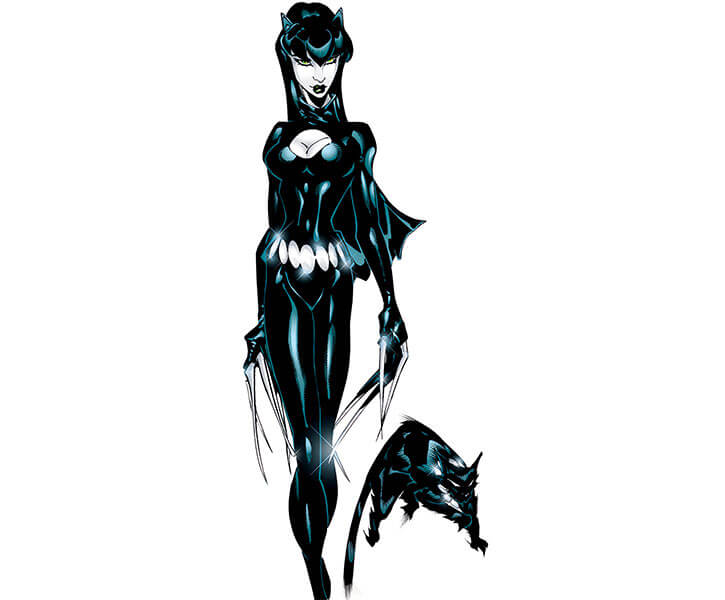 “I don’t know why I ever became a model. Sure, the pay is great, but it’s all so phony.”

“No wonder you cats are always so quiet and contented, Ebony. With powers like these, there’s no need to show off. You know you’ve got it made. And so do I !”

Thug, pointing a .45 at her: “Get in the van ! Move it ! We ain’t got all day !”
Joanie, thoroughly unimpressed: “Okay, okay. But I hope you’re aware we haven’t been properly introduced.”

Furgo: “Be patient, my lovely. In time, you will learn to love me.”
Joanie: “Yeah, when Yasser Arafat  gets bar mitzvahed !”

(Landing on Furgo’s limousine’s roof and shredding the armoured roof to bits to reach him as he tries to flee)
“Shame on you, Furgo ! I thought we were headed toward a relationship.” 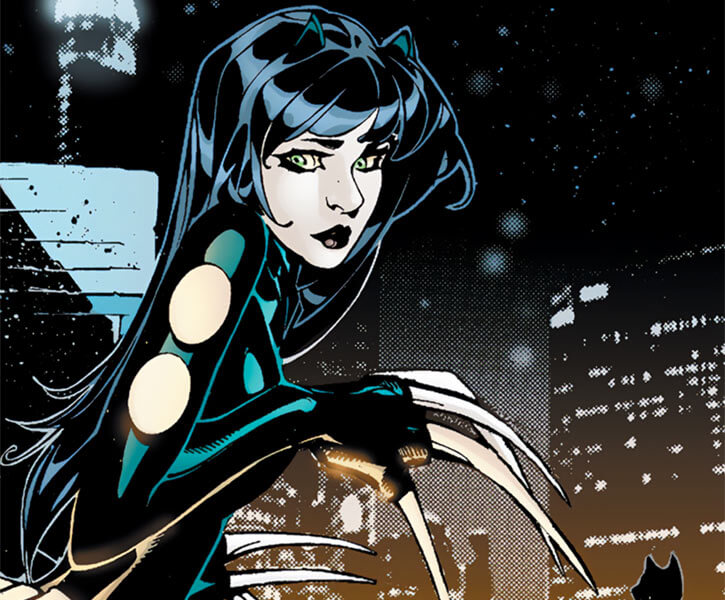 Acrobatics, Martial Artist and Thief are all Powered Skills.

Inspector Jordan (Low – he is retired and strongly dislikes Catowman, so he isn’t useful enough to be priced as High).