This is the second part of this profile. The first half is there.

To read about other versions of Catwoman, check our guide to our Catwoman character profiles.

Chosen of the Panther God ?

Catwoman’s origin sequence strongly implies that something abnormal, if not outright supernatural, is going on. Beyond her miraculous survival and her suddenly gaining top-shelf physical abilities, there’s the behaviour of the cats around her seeming corpse.

However, Kyle hit several awnings during her fall. So she *could* have survived without anything weird being involved.

In this continuity, it is possible that she’s some sort of magical revenant. There’s no sign in the movie that she isn’t human, but an ability to keep recovering from being seemingly slain would be unsurprising.

Of particular note is the fact that she’s established as being very much nearsighted as Selina. She couldn’t read without her glasses. Yet Catwoman needs zero optical correction, and she stops wearing glasses as Selina.

The first time she opens her eyes after her possible death, these are rolled back and thus featureless. Then the shot that follows her apparent murder keeps her face in shadows, before revealing its corpse-like pallor, sunken eyes and a zombie-like expression. 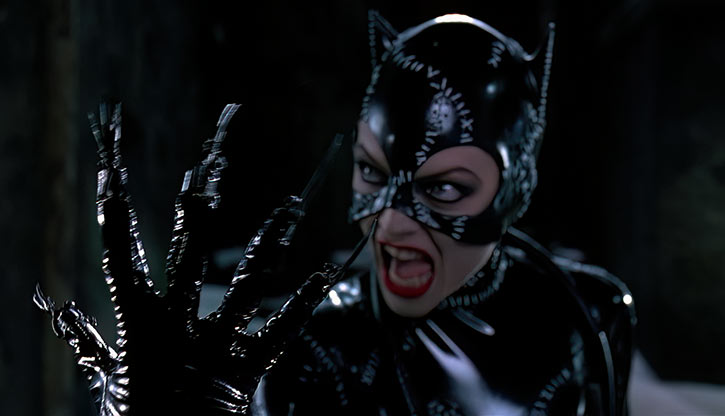 Near the end of the movie, Catwoman makes several references to having nine lives. And she appears to survive severe damage.

Now, it *is* possible that she could survive even if nothing weird was going on. When she was repeatedly shot she was in an abnormal psychic state, and what she did to kill Shreck is unclear.

However, that she recovered from these wounds, likely without medical aid, would imply something special going on. It is not clear how long passed between her apparent death and the last scene of the movie, but it is at most a day or two.

Catwoman’s durability and power of recovery likely do not correspond to a literal nine lives. How would she know, anyway ?

In the game stats we have simply assumed a minor healing factorThe power to heal wounds and regrow tissues, like Wolverine. It matches her power of recovery during the film.

As far as we can tell, Catwoman’s skills just… appear after her seeming resurrection. She becomes an accomplished acrobat, kickboxer, climber, whip expert, etc. literally overnight.

(Pfeiffer trained for months so she could do most of the whip and kickboxing stunt work herself, incidentally.)

It is established that Selina was athletic before Shreck defenestrated her. There’s a mention that an insecure boyfriend of hers left her because she bested him at racquetball. But it seems unlikely that high school athletics included *that* much bullwhip practice. Or whatever witchery is involved in launching a flurry of high kicks whilst in 5″ heels.

The movie is stylised enough that these competencies could just appear. But add that to the pile of implications that something supernatural is going on. 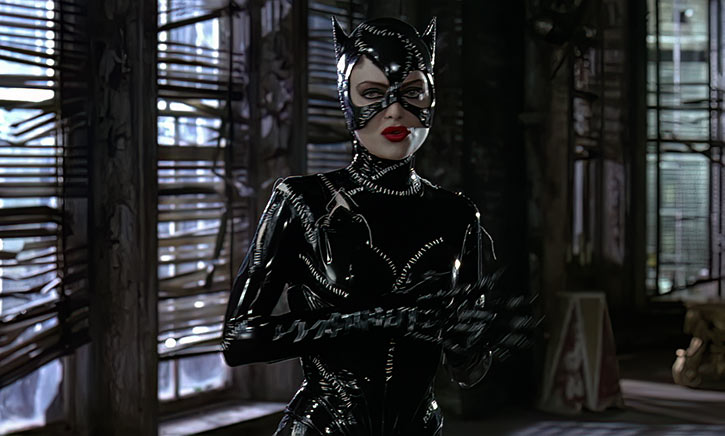 Before the “accident”, Selina had a mousy demeanour, a drab 1950s business dress and big glasses.

As Catwoman, her voice is markedly lower, less nasal – more sensual and assertive. This is comparable to the difference between Bruce Wayne’s voice and Batman’s voice (well, if you substitute “growly” for “sensual”). There’s also a memorable purring quality to her Catwoman voice.

She has smokey black makeup all around her eyes. That too resembles Batman, though her mask is much more open.

Her mouth is frequently open in excitement, and/or sports a weird, manic grin.

During much of the movie Selina sports a curly, volumised bob. IIRC these were quite popular back then.

Her skills also include sewing up an impossibly tight vinyl-like costume that somehow looks great, and applying bright red lipstick with laser-like precision.

(And I do mean “impossibly”. The latex costume used in the movie had been prepped to her *exact* measurements by being assembled on a body cast. Therefore, it required Ms. Pfeiffer to baby-powder her skin so she could cram into it. Then the latex was painted with silicon as she wore it, so it would shine brightly and look vinyl-ish.)

And thus, in no particular order :

Likewise there’s a pattern about her skin being paler and her eyes redder, usually to emphasise her torn, wild, misfit nature.

There are constant collisions between acting like a playing schoolgirl and using lascivious yet threatening moves. For instance she might adopt a skipping step (albeit with more hips movements and a more dancer-like pace), or play jumping rope with her whip before striking a pin-up pose.

However, as the movie progresses her moves become less schoolgirly, and more feral. She’s coalescing around her mission of vengeance.

Catwoman is fond of doing over-the-top cat impressions. Such as gobbling up a small bird, or licking herself (or rather her costume) clean. But with her intense behaviour, it is impossible to tell whether it’s a flamboyant joke, or she’s completely nuts.

(During one scene, Ms. Pfeiffer had an actual bird in her mouth then let it fly out. The bird had been gradually trained not to be afraid of being in someone’s mouth for two seconds or so.)

Before the “accident”, Selina was attempting to affirm herself as an adult – and failing. She was treated as — at best — a child by her boss.

She couldn’t find herself a proper boyfriend, but saw getting married as an indispensable step in becoming a grown woman. This also sexually frustrated her.

Her small, old, dingy apartment was painted fairy pink all over – and filled with plushies and other girly, childish things. She yearned to be free of her mother’s yoke, but still felt hounded by Mrs. Kyle’s endless messages on her answering machine.

Her dearest hope was to have her intelligence recognised by her boss, in a “a brilliant executive aide rises to the top”, Pepper Potts dream scenario.

The cat wants *in*

After Max Shreck seemingly murders her, Selina is traumatised and unstable.

Catwoman is at once lost, crazy and powerful. She is trying to grow into a strong, bold adult. But there are no role-models or societal space for her to be what she wants to be. Thus she likens herself to an animal – something free, dangerous and outside of society.

Catwoman can only exist on the outside, trying to find her way alone… even though she could really use psychological care. She lashes out at any sort of restraint or limitation as to her activities. But there’s also no way for her to see what’s ahead and where she’s going.

The most visible tension is wanting to affirm her sexuality, and to get out of that pit trap where she’s both all alone and constantly lusted after. Yet she’s caught in her contradictions as to how much emotional intimacy she wants, how sexually dominant she wants to be, and what sort of man she’d like.

There was strong chemistry with Bruce Wayne, though they didn’t get much time to talk about it. On Bruce’s side it seemed to be a kindred dual-soul-person thing. But it wasn’t as clear on Selina’s side – even to herself. 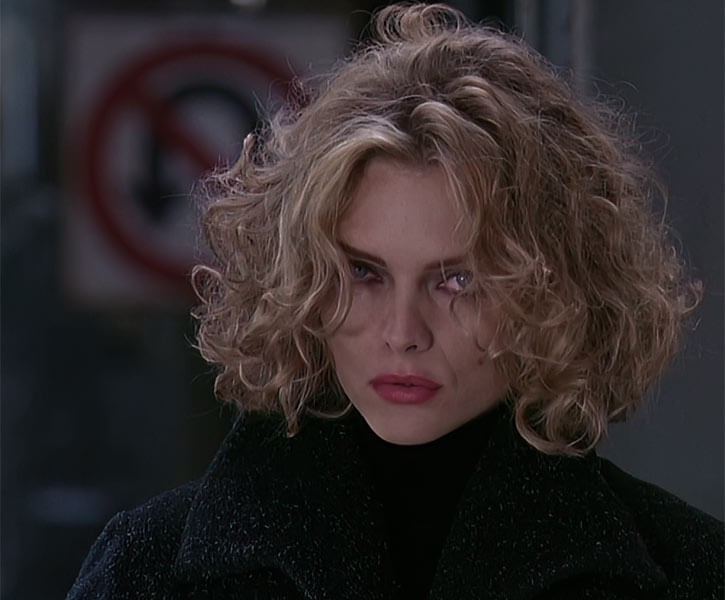 Not to be taken for granted

As Selina tries to cope with her so-so sanity and emotional tension, she occasionally talks to her reflection.

That can convey the impression that there’s a Selina persona and a Catwoman persona, à la Cheetah. But this seems much closer to a method to help her organise her thoughts. And in any case, the pre-murder Selina Kyle behaviour is gone.

Over the course of the film her sanity remains frayed, though near the end there’s a sense that she’s beginning to find a way out of the dark.

However, it is impossible for her to live if Shreck still lives. She needs to avenge herself, and Shreck represents everything that has been oppressing her and belittling her and keeping her down.

Whether killing Shreck allows her to heal from her trauma is unrevealed. But in the last glimpse of Catwoman her cowl, which had been unravelling to signify madness, is now all clean and shiny.

And that she kills Shreck using the stun gun she took at the beginning, in the first glimpse of her Catwoman nature, suggests closing a narrative arc.

As well as an electrical one, I guess.

One *possible* reading of the final minutes of the movie :

There are many possible interpretations, of course. Even though it’s a great performance, Catwoman remains undefined. She’s looking for herself – she is still in her origin sequence.

For instance, if there’s indeed something supernatural going on, the last scene could be interpreted as Miss Kitty acting on her own. She’s a supernatural agent and is moving on to Bruce, now that her work with Selina is done. 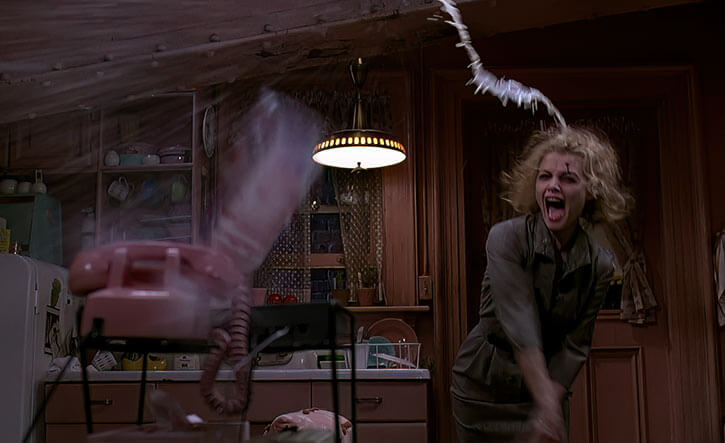 (As pre-Catwoman Selina, as she returns to her flat) “Hi honey, I’m home.” (beat, then with bitter sarcasm) “Oh I forgot. I’m not married.”

(As Shreck is about to kill her) “How can you be so mean to someone so meaningless ?”

(Emerging as Catwoman) “I don’t know about you, Miss Kitty… but I feel so much yummier.”

(As two security guards draw pistols while making lewd comments about her) “You poor guys. Always confusing your pistols with your privates.” (disarms them with her whip).

“I want in. The thought of busting Batman makes me feel all…” (sexy smile/pout) “… dirty.”

“It’s the so-called normal guys who always let you down. Sickos never scare me. At least they’re committed.” (pun ! – ed.)

(About Bruce Wayne, to a confused Alfred Pennyworth) “He makes me… feel the way… I… hope I really am.” (awkward, embarrassed and nutty smile)

(After Bruce essentially admits he’s Batman)
Selina (looking completely lost): “Ohmygod. Does it mean we have to start fighting ?” 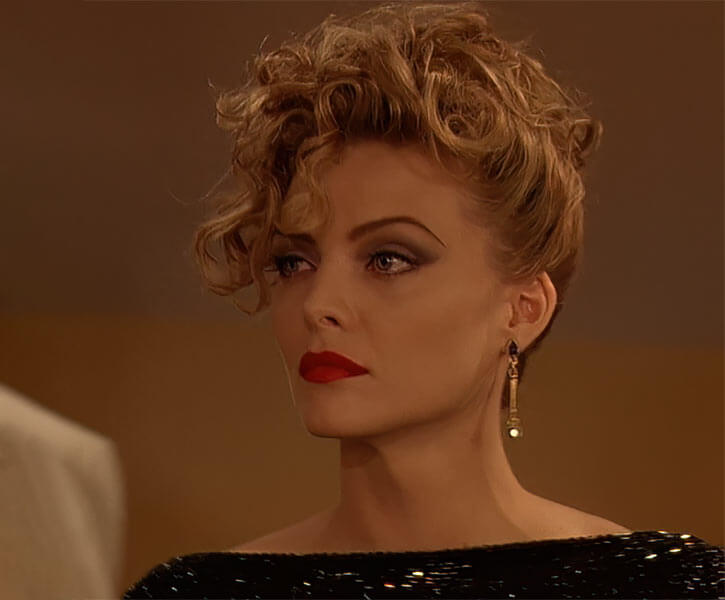 Animal control is limited to making cats act friendly toward her.

Gritty – While the events of the movies were outlandish, the effects of the Hero Points expenditure of the characters seemed fairly limited. 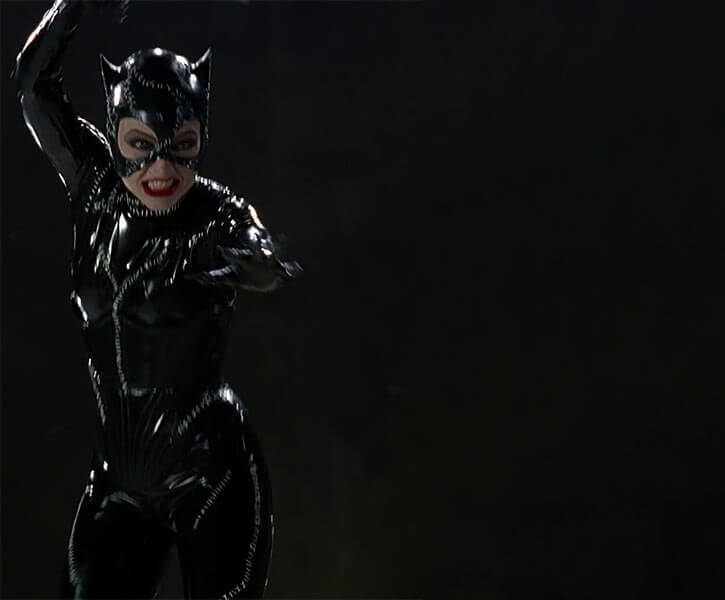 These stats are scaled for the 1989 and 1992 movie versions of Batman, who wasn’t that impressive. See his writeups.org entry for details.

One suspects that her Regeneration continues even after death. It matches the material, but is too tentative to be in the stats block.

For some thoroughly unexplainable reason I took a lot of screenshots during research – I have absolutely no idea why. So here are some extra shots I don’t feel like throwing away. 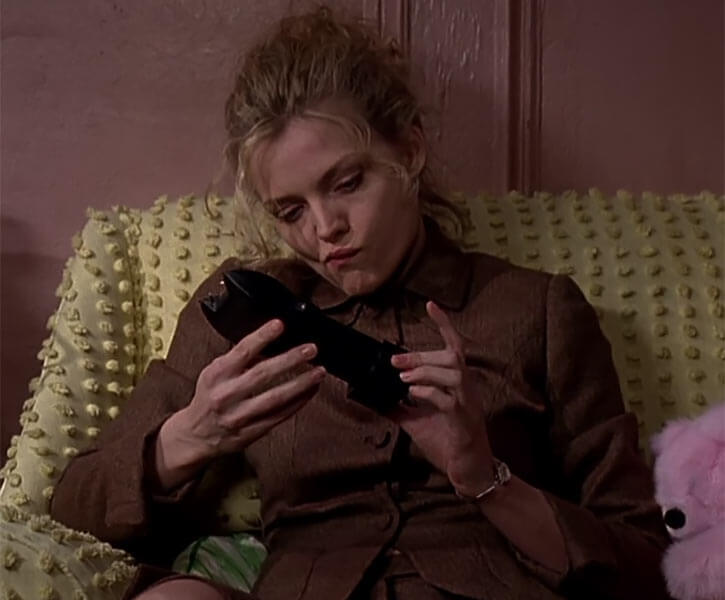 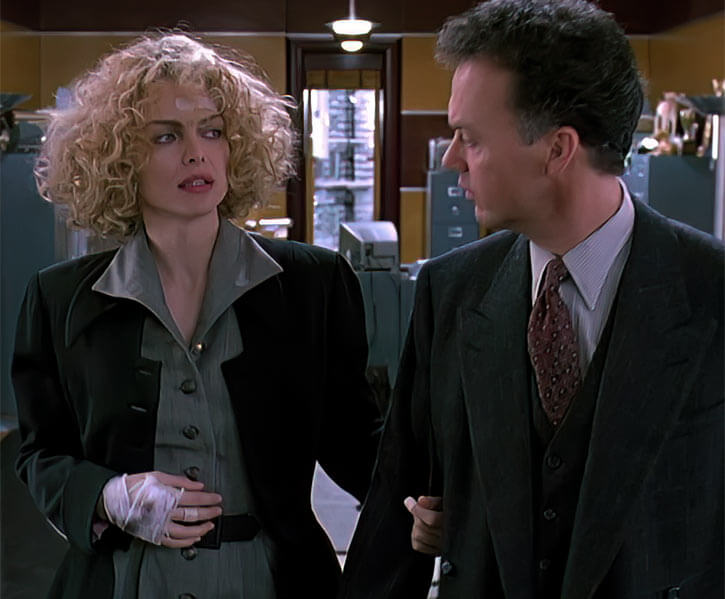 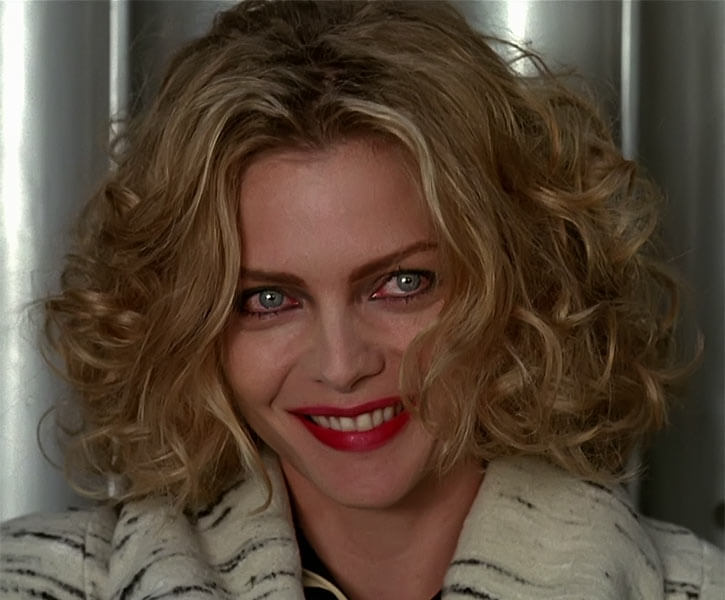 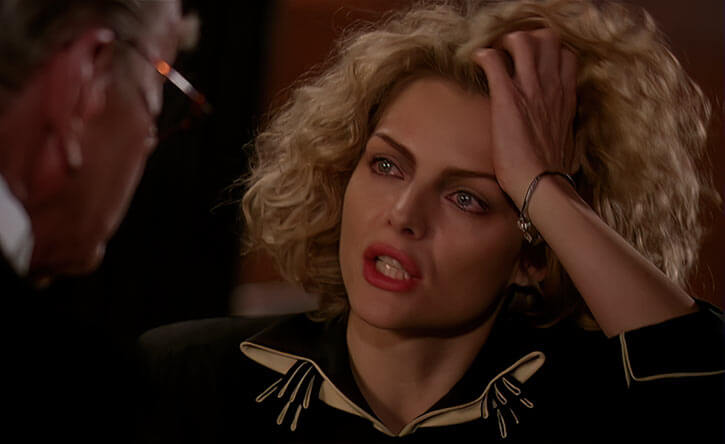 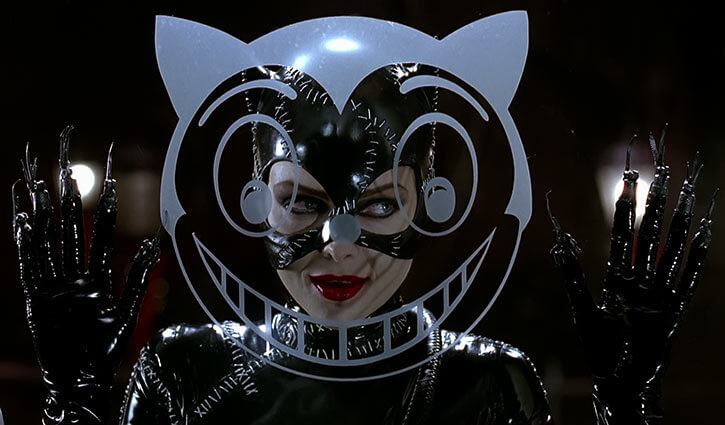 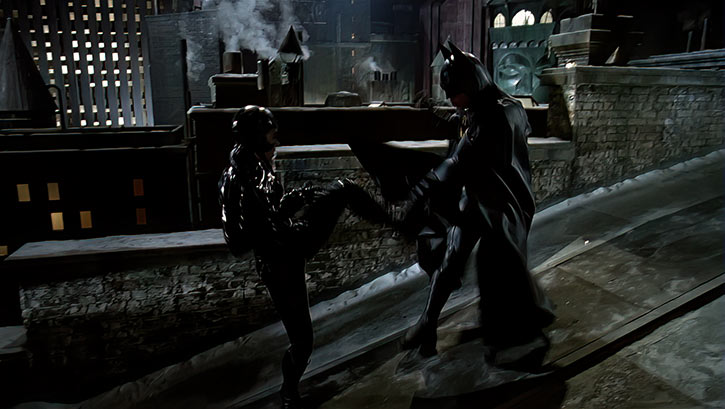 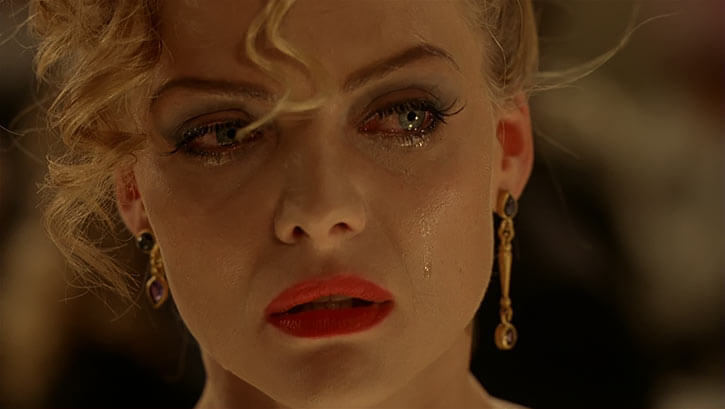 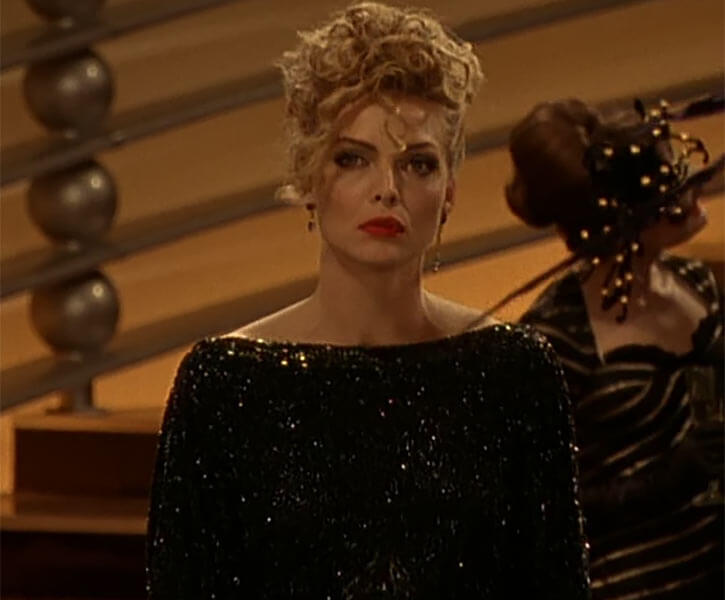 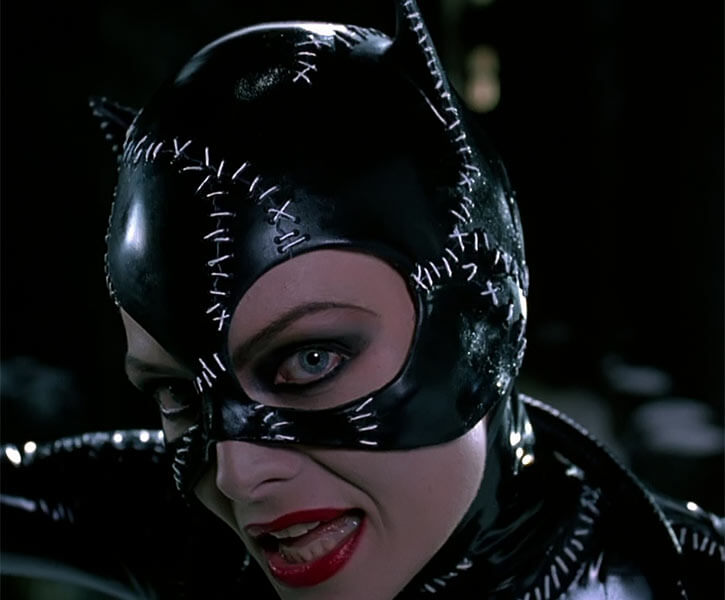