Cauldron seems to be a pile of animated witch’s cauldrons. Which are fused together to form an humanoid shape and contain a superheated, caustic green brew.

He’s a giant with superhuman strength and durability. He’s strong enough to throw SUVs with one hand.

The liquid within heats his metallic ’skin’. It takes superhuman heat tolerance to touch Cauldron. Even Goliath (William Foster) at his giant size burned himself when trying to catch him. Reportedly, Cauldron’s body is heated at 800°F (425°C).

Cauldron can vomit the brew onto his opponents. Apparently the liquid replenishes within him, and he never runs out. The foul mixture is a potent weapon (in DC Heroes RPG terms, Flame project, Acid). As it splashes on the ground will start fuming, saturating the area with choking, opaque green fumes (Fog, Chemical attack).

Cauldron can spit the brew at about 20 feet with effort.

Cauldron stole the dimensional wave inducer that scientific genius Bill Foster (aka Goliath) was working on. Foster and his visiting friend Benjamin J. Grimm gave chase. Though Goliath couldn’t touch Cauldron without getting burned, the Thing had no such problem.

Ignoring a large quantity of Cauldron’s liquid being sprayed on him, Grimm punched the thief in the mouth. This deformed the metal and incapacitated the villain.

While being arrested by S.H.I.E.L.D. agents, Cauldron swore to sue the Thing for the physical and moral damage he suffered. He took counsel with the famous Goodman, Lieber, Kurtzberg,&Holliway firm. The excessive force lawsuit was unsuccessful, however.

Cauldron apparently escaped betwene 2006 and 2009. He was nowhere to be found in the US prison system during Norman Osborn’s time in power.

Cauldron’s word bubbles are coloured grey. So he presumably has some sort of inhuman, metallic voice.

One would expect him to be some sort of magical and/or extradimensional  being. And yet Cauldron seems to be a basic, small-time modern American criminal. A thug and a bully, he frequents similar dim-witted minor superhuman legbreakers. He is chiefly interested in money and bragging rights.

Cauldron does not deal well with being harmed or beaten, though. He will not hesitate to fake injury, claim damage, whine, sue, etc. in a most aggravating way.

“Hah ! Can’t wait t’tell the guys ! I cooked the Thing ! Rocky hide and all ! Cooked him up like a lobster dinner !”

Drawbacks:
Altered Anatomy, Distinct Appearance, MPR (No Fine Manipulation), Misc.: Cauldron is a metallic being and is affected as such by various magnetic, metal manipulation, etc. Powers and effects. 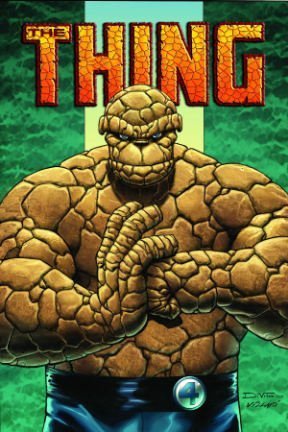 The Thing: Idol of Millions by Dan Slott