The Cavalier was a professional stunt man in superb physical condition, and with truly exceptional skills.

Hudson Pyle was a movie stunt man who wanted to be a star. He craved both the thrills of his own work and the acclaim afforded the actual actors.

Hearing of the debut and early adventures of Batman, Pyle hit upon a plan. He would invent a costumed identity for himself, and pit his own skills against criminals. Then, at the height of his popularity, he would reveal himself. From there he could ride the wave of publicity to starring roles instead of stunt work.

Thus was born The Cavalier. His lighthearted attitude and swashbuckling movie-hero style captured the hearts of Gothamites. These were still somewhat distrustful of the dark and brooding Batman.

Vigilante with a sword

Pyle originally considered his crimefighting career a lark, an extended publicity stunt. But as time went by, he found himself loving it more for its own sake. He became addicted to the rush of life-and-death situations. He also was satisfied by the acclaim given a real-life hero. No mere movie star could ever win this.

Pyle’s undoing came from falling in love with the wrong woman. One night, he saved a potential suicide victim from leaping off a bridge. He fell in love with her at first sight.

Ellen was a wealthy Gotham socialite suffering under the burden of blackmail. She had accidentally killed her abusive husband in self-defense. She covered the crime up, telling police a burglar had done it.

Unfortunately, the crime had been witnessed by a neighbor, the bored and degenerate Randolph Salt. Salt managed to get ahold of the murder weapon and was draining Ellen dry. 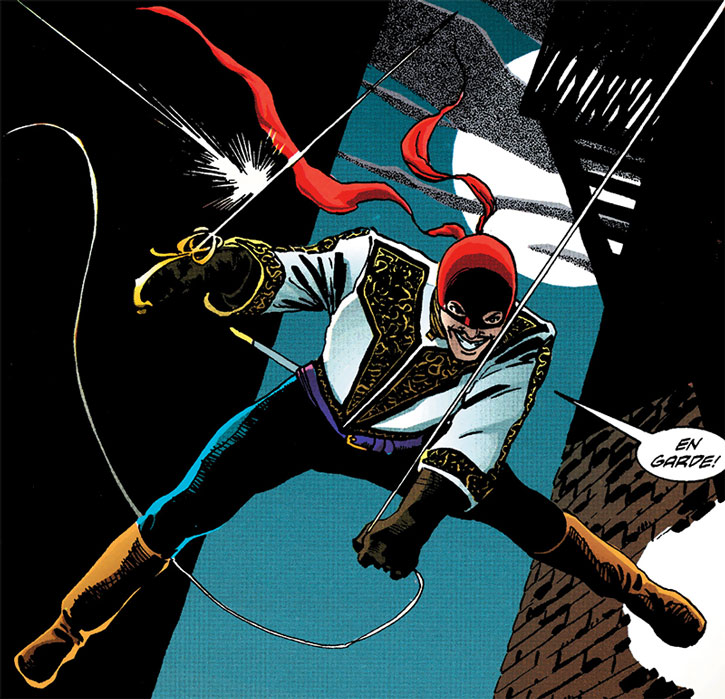 When Pyle confronted Salt, he too was forced into servitude. He had to commit a series of spectacular jewel thefts for Salt’s enrichment and amusement. With Batman withdrawn and obsessed with catching a particularly nasty and baffling serial killer, the Cavalier’s “pursuit” of the mysterious “jewel thief” held the public’s attention.

But a robbery went bad, and the notorious thief was exposed as Gotham’s popular new champion leading a double life. Driven to desperation, Pyle once more confronted Salt, murdering the blackmailer and a henchman in cold blood.

With his elusive killer caught, Batman cornered The Cavalier. The two engaged in a spectacular, climactic sword fight across the roof tops of Gotham. When the roof of an old warehouse caved in underneath them, Batman suffered minor injuries that allowed The Cavalier to act.

Pyle despaired of ever having a normal life with Ellen when the whole truth came out. He also was frightened by his own capacity for killing. As a consequence, he charged the ring of police surrounding the warehouse with an empty gun. The Cavalier was shot dead.

Hudson Pyle was a lean, muscular 30-ish man with classical movie star looks. He had wavy dark-brown hair, a dapper pencil mustache, and a dazzling smile.

His uniform consisted of black tights, and a blousy white ’pirate‘ shirt with black-and-gold filigree down the front and sleeves.

He sported boots, gloves and a belt for his sword, all in matching brown leather. A purple sash circled his waist, and his face was hidden by a red Zorro-style bandana mask, with long ends that trailed down behind him.

The Cavalier was first and foremost an entertainer. He took his cues from old swashbuckling adventure movies, and actors like Douglas Fairbanks and Errol Flynn. He played to the crowds and basked in attention and public acclaim.

He loved drama and always did everything in the most stylish manner possible. He was an adrenaline junkie, craving the rush and excitement of both crime and crime-fighting.

“I like the light that *only* night produces… The beauty of street lamp tungsten and flickering neon. I use it for drama. As you use the shadows, you old showman, you.”

Source of Character: “Blades” in Legends of the dark knight, issues 32-34 (DC Universe). 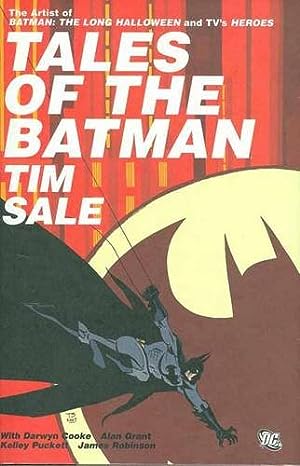 Tales of the Batman: Tim Sale 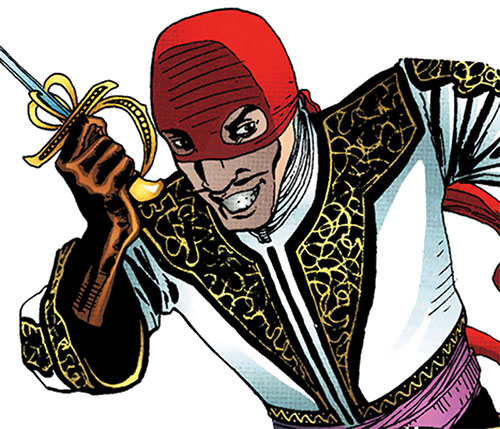 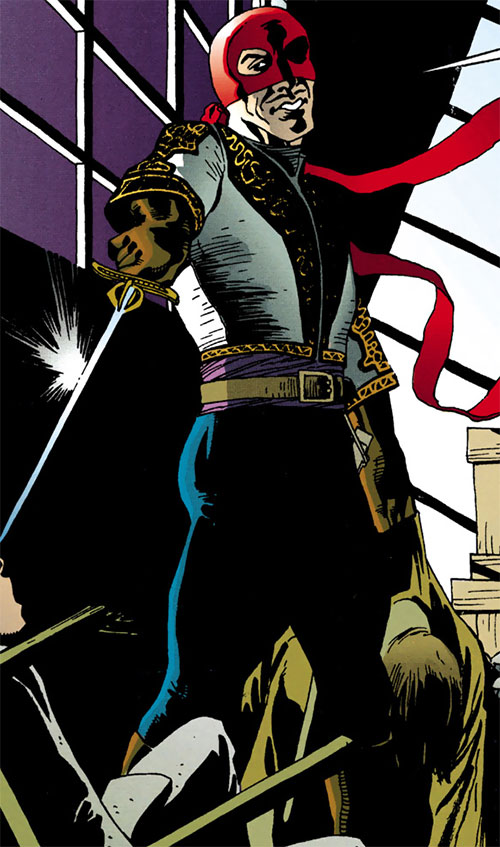 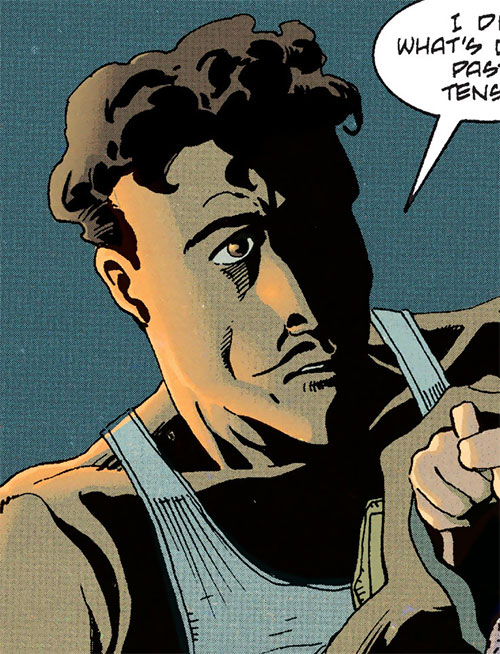