During the course of the story, Cedric becomes pretty much affiliated with a Buddhist temple. It is headed by Master Sahn, an older woman of apparently Vietnamese or Cambodian hheritage. She’s a compassionate and perceptive nun with a number of community contacts among youth hostels, social workers, schools and the like.

Master Sahn is assisted by a young (early 20s ?) Asian-American woman. She does the menial tasks at the temple – cooking, cleaning, taking care of the plants, etc.. She also raises her little brother, an undisciplined but well-meaning teenager who is more interested in hanging out with other kids with vague Triad connections than in going to school.

The siblings are always called Big Sister and Little Brother by everyone.

Big Sister is a gentle and compassionate Buddhist, and likely a nun-in-training. She has a sympathetic, patient, charitable and open mind. She cares a lot about Little Brother, considering that he is the only thing she has in this world. But Big Sister has secrets of her own, as revealed later in the series.

Cedric seems to be a world-class muay thai prize fighter. He has received intensive training and physical conditioning since an early age. He’s able to beat up three or four street thugs who have good muay thai training, and has been seen kicking a door or even an old telephone pole into splinters with a savage jumping kick.

He’s particularly athletic. Cedric also knows a lot about first aid and bandages – if only because he’s been through so much of it.

Looking at him fight is very impressive, and even the jaded spectators of the New York fighting pit had never seen so much power and such a fine technique.

Cedric was raised in a Buddhist monastery in the mountains, presumably in Thailand, until he was five. At that point he was captured by a child slavery ring. He was then raised in the slave pits for 12 years.

The place was a sort of perverted reflection of the temple he originally grew up in. This place too was intensively teaching the martial arts, but for to set up lucrative, violent fights between teenage boxers. The slavery ring also had a number of young girls, though they were intended for prostitution and not fighting.

Cedric’s taskmaster was Sivan, the son of the slavemaster. He regularly beat up younger boys such as Ced during the brutal training sessions, and abused the young girls.

Cedric and a blonde girl named Christy clung together, and grew up together. Christy was about three years older than Ced. They savagely defended each other, comforted and healed each other. They became so emotionally fused with one another that they were basically one person. 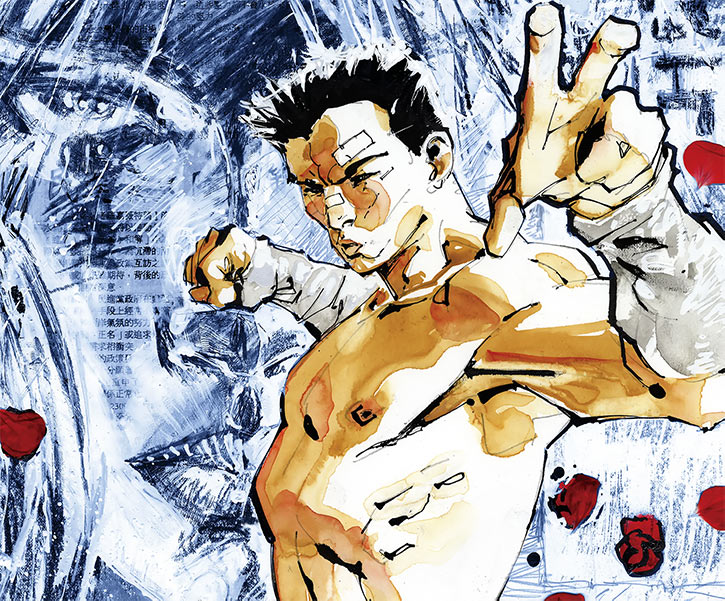 It is likely Christy who taught English to Cedric – so, I assume, they could talk without being understood by most of their jailers.

When he was 17, Ced was bought by Amy Johnson, an American grad student backpacking in the area as she was researching her thesis. Though Cedric was suddenly free, he was also separated from Christy.

The pampered and self-centred Johnson turned him into thesis material. She also spun off that an article about child slavery, which she sold to a widely-circulated magazine.

She also kept Cedric fed, housed and clothed only as long as he would have sex with her. Unable to stand this new form of slavery but knowing he owed her a lot, Ced spent a large amount of time meditating on the situation at the local Buddhist temple. And one day, he did not return to Johnson’s apartment.

All the while, Ced, sundered from his other half, had but one thought on his battered mind – find Christy and free her.

Ced is visibly a fighter. He’s often nursing a number of contusions and lacerations after a fight.

Cedric is a closed, solitary young man. He has been through Hell and bears many physical and mental scars.

His fighting prowess is all he feels he has. And he doesn’t really like fighting, though once he’s actually in the ring he will be flush with contentment and a feeling of power and mastery.

He doesn’t like talking about himself. He hates the look of pity and revulsion he sees in most people when he tells his tale – or if they recognise him from Amy’s article.

Bosses, slavery, illegal fighting pits, prostitution, slave drivers, paedophiles, child abduction, etc. drive him to outbursts of frightening, neurotic rage. Cedric will use potentially murderous violence when he confronts those. He will fight like a man possessed and be barely able to restrain his violence even when dealing with informers.

Cedric is a devout believer in both his religions – Buddhism and Christy. He does his best to be a good Buddhist – though of course the whole bloody violence thing is a problem he’s painfully aware of.

As for Christy, he simply cannot live without her. He’s haunted by painful thoughts of her and the necessity of being reunited with her. He has been ripped away from half of his being when he was separated from her and is unable to handle such a massive and traumatic loss.

“Christy’s my life. She’s my life and I’ve lost her and don’t know where she is.”

“This is how I learned to fight, Little Brother. I grew up fighting like this. It’s the worst way to live.”

“We go, now. All of us, to Sivan’s. This whole thing is gonna end tonight.” 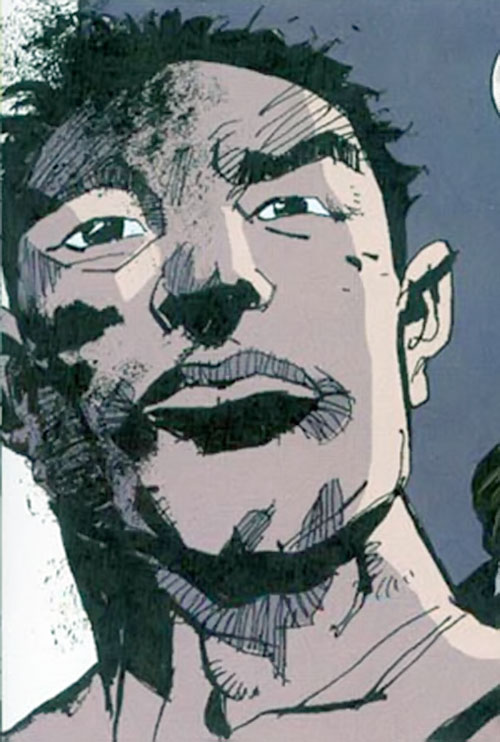 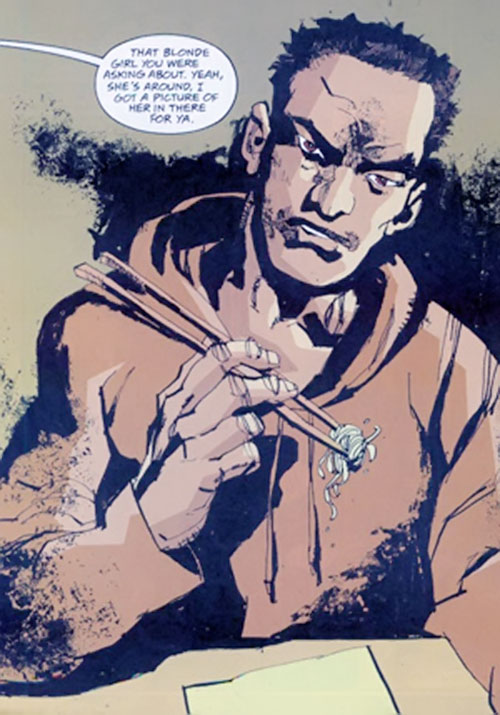 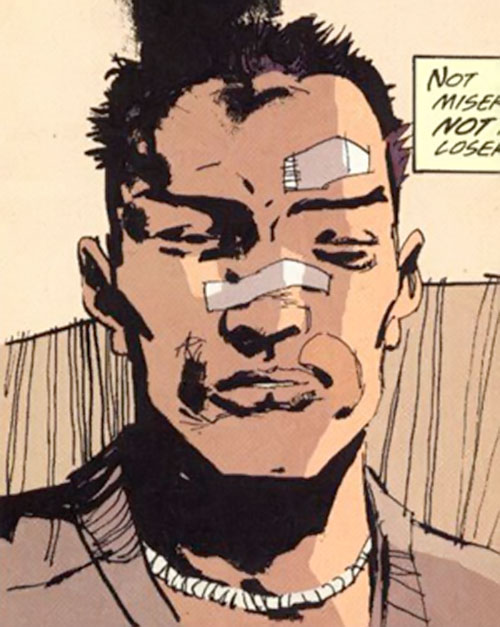 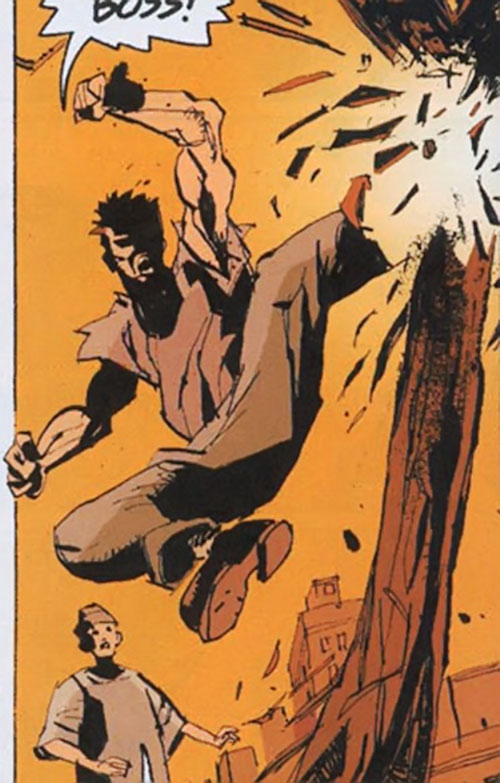 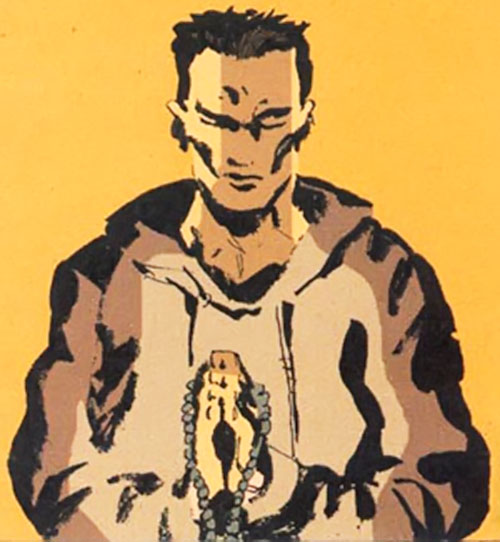