A highly agile combatant, the Celestial Archer’s natural abilities may have been augmented by either the Moon Maiden or the Bow itself. As to his archery skill, it is likely a gift of the Bow.

The Celestial Bow of Yi allows the Archer to perform amazing, and occasionally unnatural, shots. Capable of hitting with unerring accuracy, and penetrating the toughest of hides, he has been known to:

The ammo limit in our game stats is speculative. This is as many as I’ve counted him using at a time, but the quiver was obtained with the bow so it wouldn’t be out of line for it to be self-replenishing.

Growing up in Tai’an, Xu Tao sold snacks and trinkets to sightseers. That lasted until his father refused to bribe the local police, and they lost their stall. The only way to survive after that was for Tao to join a street gang. But he proved such a bad thief that his new “friends” were arrested.

They were soon let out of jail, and came after him to make an example. Fleeing, he hid within the roots of a gnarled old tree within the temple on Mount Tai .

The tree and its roots

The roots of the tree dragged him down, into a sacred tomb beneath the ground. There, he found the Celestial Bow of Yi. Yi had descended to the ’solid world‘ on a divine mission four thousand years before, where he had aged, and eventually died. The bow was now also dying without an archer to draw it, and called out to Tao to take it. He did.

After chasing off the gang members who’d hounded him, Tao felt the urge to fire an arrow at the moon. It created a bridge which he ascended, quickly finding himself in the domain of the Goddess Xiang-O, the Moon Maiden, and widow of Yi. She took Tao to the home of the Gods, where they gave him a mission to pave the way for their return, inspiring the Chinese to remember them.

Tao acted as a rogue superhuman for a couple of years, during which he was hunted by the August General in Iron. But he eventually accepted a place on the Great Ten, hoping to fulfil his role from there.

When the ’Gods’ apparently returned to China, the Archer felt it was due to his failure at the task he’d been given. Thus, he joined them. Soon realising they weren’t who they appeared, and believed themselves to be, he fed information to the Great Ten. The Archer also subtly made the ’Gods’ question themselves.

Once they had lost faith in their identities, he took them to the Moon Maiden, who revealed to them their true nature.

The youngest of the Ten, the Archer tends to fade into the background amongst the stronger personalities. But he’s usually friendly and cheerful. However he’s in no way reluctant to join combat, and indeed seems to enjoy action. 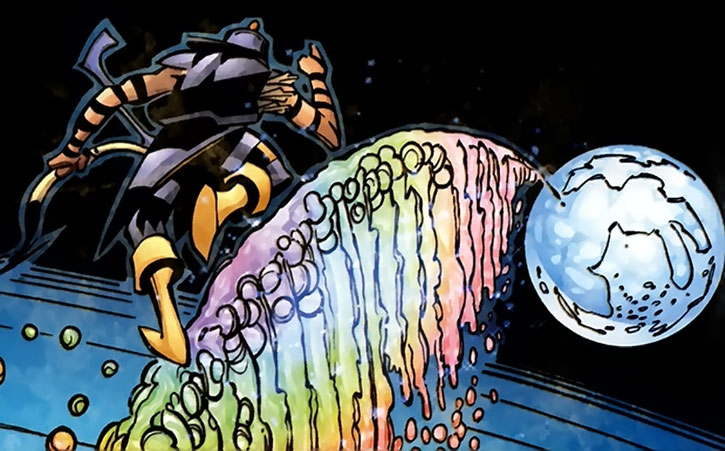 While usually following his orders and keeping his concerns to himself, he is viewed by the hardliners of the team as one of the more liberal members. But while this may be true, he tends to be quiet among his older, more forceful team mates.

While seeming to enjoy his role as super-functionary, when the Gods appeared to return he began to worry that it was due to his not having carried out his mission in time. Whether this encounter will prompt him to devote more attention to this role is unclear.

“Bullets. How very… western of you.”

“I can turn day to night. I can hit a target halfway around the world. I can hold off a modern army with only bow and quiver… but I am still that scared teenaged boy… hiding behind a myth.” 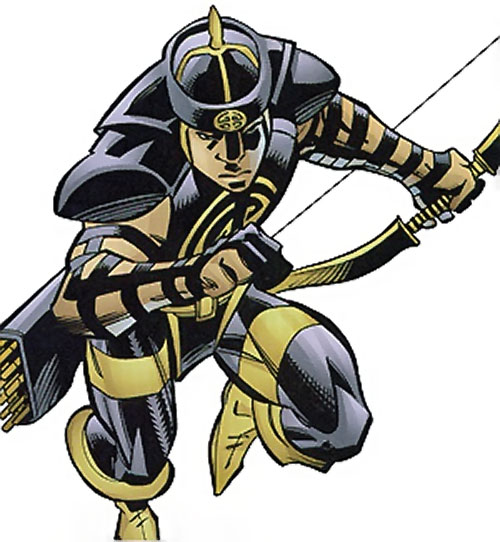 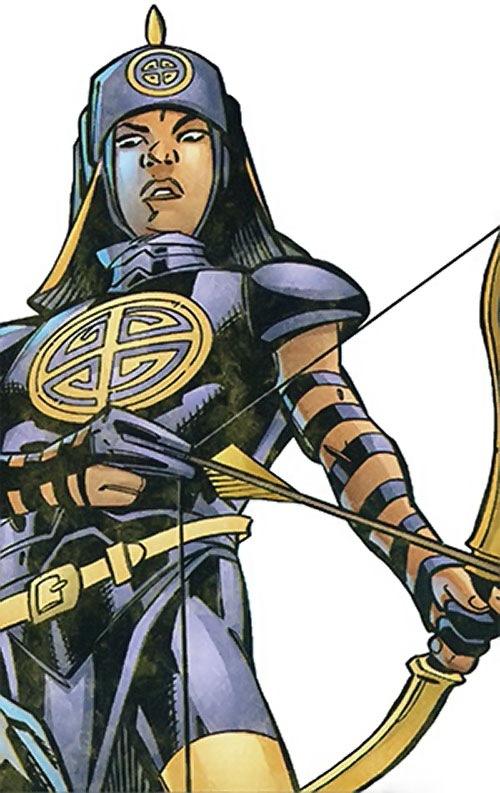