Centurius is a genius in genetics and biology, as well as a formidable technologist. He’s a master in the creation and forced evolution of life. He can use this expertise to produce large numbers of unearthly monsters if he so wishes.

He also has a knack for running giant bases full of advanced technology and super-weapons. Said bases must be cost about as much as Texas.

Centurius has also said that his body was that of a “superior being”, without further explanations. He did seem pretty fast and strong, but that’s about all we know. He also could nullify ageing by exposing himself to his evolution rays.

Dr. Noah Black was a semi-famous scientist in the 1930s. A genius in several areas of biology, he won a Nobel Prize for his work. This means that he was the first Black person to ever earn a Nobel Prize, and the only one to earn a hard sciences-based one. As of 2017 and in the real world, only 15 Black persons have earned a Nobel  (starting in 1950), and 11 of these were the Peace Prize.

Dr. Black’s research led him to the conclusion that life wasn’t a strictly terrestrial phenomenon. He thought that it had actually originated in internuclear space – beyond what was later to be called the Pym barrier.

This radical hypothesis was ridiculed by a resentful scientific community. Black felt crushed by peer pressure. He exiled himself to continue his research.

On a remote island; Dr. Black developed super-advanced technology to test his hypothesis. Using powerful rays, he could actually observe worlds in the Microverse. He watched them evolve at an accelerated path, sometimes developing life. He was soon documenting new forms of life. Some were entirely alien, some were parallel evolution to Earth.

He eventually became capable of using this knowledge to create new forms of life. These included a strange species of sapient  but highly obedient servitors.

With this large workforce and over decades, Dr. Black built a titanic base over his island. He called it Valhalla. He also acquired eternal youth by bathing in “evolution rays”, and began calling himself Centurius.

A few months after Nick Fury became head of S.H.I.E.L.D., Centurius finished his master plan. It was a fully functional, diverse ecosystem which could evolve from seed material. He loaded the seed material into a small spacecraft, which he launched in orbit. But the launch downed the aircraft of Nick Fury and Jimmy Woo as it flew near Valhalla Island.

On Valhalla, Fury and Woo discussed with Black. They thus discovered that the next step in Centurius’ plan was to cleanse Earth with nuclear fire from the spacecraft. He considered that humanity was bound to destroy itself in any case. Centurius would then wait for a century, then reseed the world with his new ecosystem. This would give life on Earth a second chance.

A fight ensued between the stalwart S.H.I.E.L.D. agents and Centurius. In the end Centurius stepped into an evolution ray and was seemingly devolved into protoplasm. The spacecraft came back on Earth and crashed into the volcano, seemingly destroying Valhalla island.

However, Centurius somehow evolved back. His new form was in fact said to be superhuman, although the specifics are unknown. He also repaired the destruction on Valhalla island, and repopulated it with his strange servitors and giant monsters.

Dr. Black somehow came into contact with the Conspiracy. This organisation was trying to rebuild the Bloodgem to unleash universal chaos in this dimension , and ascend to godhood.

Centurius worked hard on capturing Bloodgem fragments before Ulysses Bloodstone could. He also had a secondary or backup plan which involved capturing great scientists to evolve himself further.

(We’re not going to repeat much information from other entries here. If you want to better understand the whole Conspiracy and Bloodgem stuff, read the Ulysses Bloodstone profile then the Conspiracy one.)

In 1977, Centurius spent a giant flying monster to down an airliner. Aboard was a researcher carrying a Bloodgem fragment. He also had his men capture Goram, a giant monster who just had fled from Bloodstone Island. By capturing Goram, he also captured Brad Carter, Bloodstone’s assistant.

Against the Monster Hunter

While Iron Man was busy battling the giant flying monster, Bloodstone tore through the defences to confront Centurius. He rescued the captured scientists on his way. Eventually, the island was bombarded by S.H.I.E.L.D. airplanes and invaded by two companies of S.H.I.E.L.D. soldiers, then destroyed.

Centurius, confronted by both Ullux’l Kwan Tae Synn and Bloodstone, managed to destroy Ullux’l with a special energy canon. He then fled.

However, the Bloodgem had duped them. It merely used their astral  selves to power itself, leaving their bodies catatonic and their spirits trapped together within a golem. At this point Bloodstone’s corpse rose and destroyed the Bloodgem. This also destroyed the astral selves of the Conspiracy members.

More than a decade later, Captain America (Steve Rogers) would find the withered husks of Centurius and the others. The corpses were still in the cavern under Central Park where the ritual had taken place.

Much more recently, during the ascension toward power of the Hood (Parker Robins), a man in a Centurius costume has joined the Hood’s gang. This bloke doesn’t seem to be Centurius. He’s just… there, does nothing special and just fights with his fists.

Perhaps he’s a Conspiracy agent who absconded with a spare suit in the hope of passing himself for the real McCoy ?

Standard mad scientist, really. He speaks in a very elaborate way with a lot of techno-babble.

He also insists that he is no longer Noah Black but Centurius, a vastly superior being.

Before his defeat at the hands of Fury, he was convinced he was working for the greater good. He also was quite a gracious host.

“Forgive the manner of my welcome, stranger — but the facilities for greeting guests are unfortunately quite sparse ! So then, fear not, for you are perfectly safe in the hydro-capsule enclosing you – even though it was not meant for a human form. In a moment, the thermalic suppression beam will lower you to this ninth level promenade !”

The terrible arsenal of Centurius !!

The island does not seem to have special defences. But it is covered by an holographic field (Illusion: 10, Bonus : covers the entire island) of rare power and sophistication. The illusion is that of a perfectly ordinary desert island.

Giant creatures occasionally patrol the local airspace. Some look like an elongated brain with butterfly wings and ten insect-like legs, with the body roughly the size of a limousine.

The parks in the base itself have a variety of dinosaurs. These are the result of parallel evolution in some of Centurius’ experiments. Feel free to add a few tyrannosaurs, allosaurs, pterodactyls and all the classics you expect to find in the jungles of a lost island.

While he was working for the Conspiracy, Centurius developed a gigantic flying monster. It looked roughly like a shark with the wings of a manta ray and leathery, clawed bird-like legs. This monster was strong enough to wrestle a Boeing airliner from the sky and crash it, and Iron Man found it difficult to defeat.

The base had at least a half-dozen man-sized, humanoid combat robots. These looked a bit like Nimrod, only with round heads.

Centurius’ control room had an energy cannon focusing its beam through a Bloodgem fragment. It proved able to destroy Ullux’l Kwan Tae Synn.

Apparently it had Disintegration: 10, at least against its intended target, and the fragment negated whatever Invulnerability Ullux’l may have had.

It was equipped with a paralysis ray weapon who could paralyze a giant monster for one hour. Possible stats are [Paralysis: 15, Range: 06, R#04, Limitation : Paralysis has No Range and uses the listed Range]

Centurius once tried to take down Jimmy Woo with a “stun disc”. What he did remains a mystery, as he never had a chance to fire/throw it.

These are the green guys with vaguely snail-like heads. They speak fluent English and seem very obedient to their master. The wield heavy heat-ray pistols that can incinerate a man or knock out a small plane with a luck shot.

Centurius also had human henchmen with enhanced eyes. These presumably were Conspiracy henchmen he had enhanced.

Source of Character: A 1968 issue of Nick Fury, Agent of SHIELD and two issues of Rampaging Hulk circa 1977. 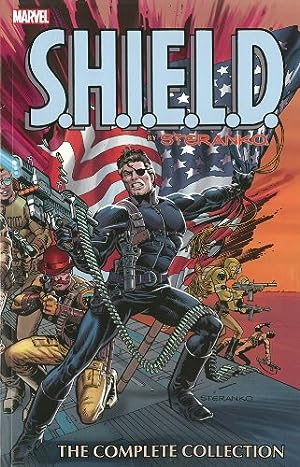 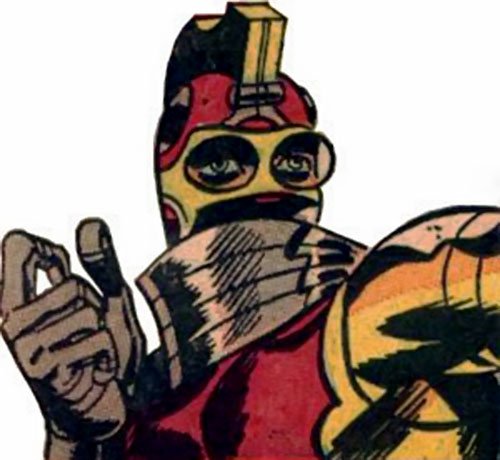 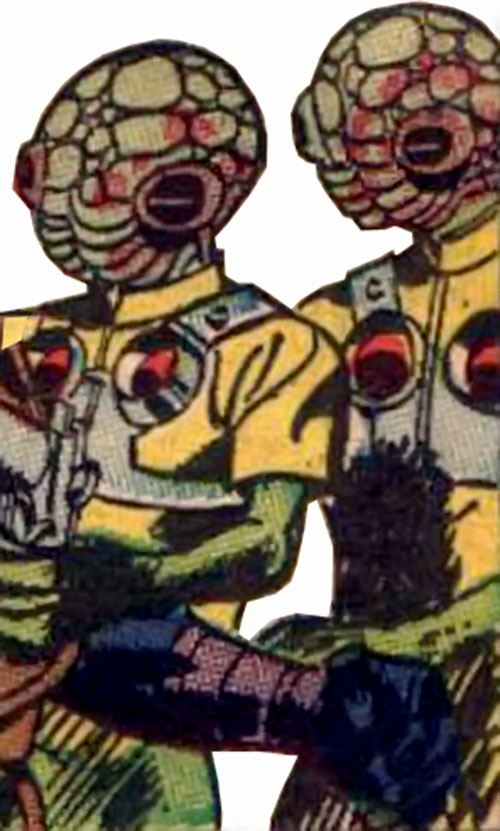