Shakti Haddad has the ability to telepathically control the neural systems of other living beings. She can move a person against their will, activate any powers they may have, or simply shut down their neural systems, rendering them helpless. She cannot do this to many targets at once, nor can she do it over long distances, but within her limitations she is quite formidable.

She is also a trained fighter, and a brilliant medic and scientist.

Shakti will typically use neural control to take over a person’s body and simply hold them immobile. This is easiest for her to do. If necessary, she will knock them out so she can turn her attention elsewhere. She will rarely use people as puppets because 1.) it’s against her grain to do so and 2.) it’s more difficult.

She has never been seen to, for example, speak through a controlled victim, probably because of the complexity of the task.

Shakti thus would rarely made advanced use of her abilities, even though she ought to be capable of them. This is simply because there are better ways of strategically using her powers, as she demonstrated while sparring with Skullfire (She used her power to hold him immobile while she kicked the **** out of him).

Shakti was raised in her father’s (the infamous Red Marketeer Zail Haddad’s) bioshop. She learned at his elbow as he dissected corpses, and occasionally live specimens. The elder Haddad worked for the corporation labs, and for sale to those who needed replacement parts.

On one occasion Zail locked his daughter in with the corpses, apparently overnight. This incident still causes Shakti grief to this day.

At some point she ran away to Hong Kong, surviving on the streets for an undisclosed length of time. Then her medical genius led to being recruited by Stark/Fujikawa for their own medical division. Then she met Xi’an Chi Xan, fresh from his Saigon epiphany. Haddad learned Xi’an’s vision for a post-corp society.

Unsatisfied with corporate life, and inspired by the charismatic Xi’an, she left her lab. She followed him into the desert as his first disciple.

It was Shakti who found and recruited the other members of the X-Men 2099. She acted as Xi’an’s right hand person. And though the road they traveled was rough and uncertain, Shakti’s faith in Xi’an’s vision has never wavered. Even when Xi’an turned against them, Shakti held out the hope that they could rescue him and begin again.

After the rescue at the Slaughterhouse, Shakti joined the others at Halo City. There they became the city’s mutant protectors. Shakti, however, eventually left the city to help Doom seek for the prophesied Mutant Messiah. Both believed would eventually show up there.

Shakti (briefly) became the leader and guide to a group of young mutants who became X-Nation before they were killed by Exodus. The series ended an issue later.

She always wore a sort of microphone attachment on her jaw, but it was never shown what it was for.

Shakti has been called the “Ice Queen” for good reason. She is cool, reserved, analytical, and logical at all times. Shakti is not emotional, but she does have feelings.

She is actually quite concerned for her teammates, and is not above expressing it. But she will do so in her own (cool, reserved) way. She has only ever lost control of herself once: when she thought her father was dead. Then she lashed out at the person responsible with a psionic  burst, knocking him out.

Despite the cool exterior Shakti is a bundle of neuroses with very strong drives and traumas. See her various DC Heroes RPG mental Drawbacks.

“Before we can determine whether Xi’an is *beyond* redemption, we must first *find* him.”

Equipment:
NEURAL JACK [BODY 03, Telepathy: 06, R#: 2, HP Cost: 41. Notes : Telepathy: Only for Computers, may only be used if “jacked in” to a computer or remote terminal, The neural jack is implanted in Shakti’s skull and cannot be targeted separately].

Shakti remained very stable across the (admittedly brief) run of 2099. However, for her pre-X-Nation appearances, take away the contact to X-Nation and Doom, and her Guilt. While leader of X-Nation, she didn’t have the Guilt.

It ought to be noted that any task higher on the Universal Modifiers Table than Challenging should also require Shakti herself to give up her own Automatic actions for the round, as the degree of concentration required is so extreme. Any action higher than Difficult and she also ought not to be able to use her Movement action for the round as well.

This limitation is used to simulate an effect that is far in excess of its Range. (i.e., Cyclops’s Optic Blast may be 13 AP’s, but no way can he fire it at a range of 8 miles) This limitation normally halves the number of AP’s used to determine range, rounded where necessary (up or down is up to GM/Player decision, based on the needs of the game a/o player) E.g., Cyclops has Energy Blast 13, his range is 6, about 200 yards.

Shakti has a special version of this, Restricted Range, which sets a maximum range less than ½ the AP’s of power. Restricted Range is still -1FC, simply because it is not really any more of a limitation than the other version. 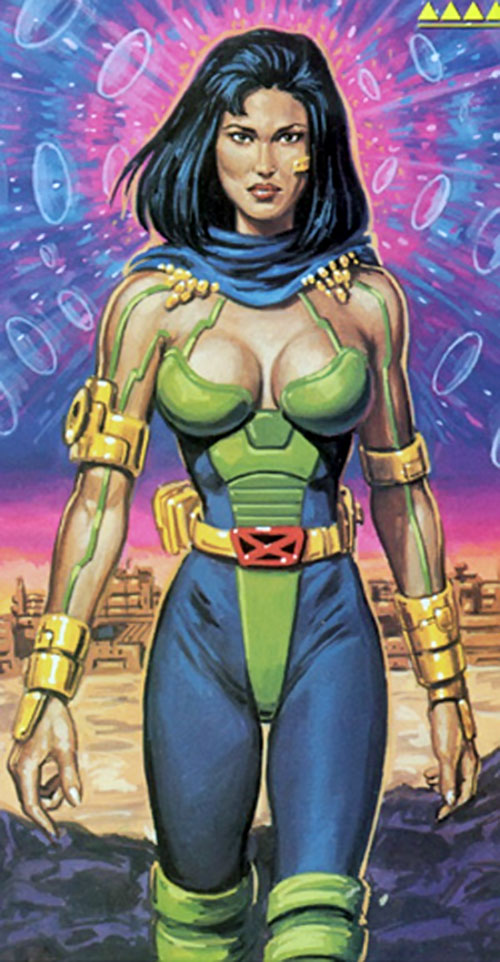