A genetically engineered member of an unidentified race (possibly a Shi’ar, but certainly a subject of the Shi’ar Empire), Cerise is more robust than humans.

She also has the ability to generate and manipulate energy fields of coherent light. She can use that:

She can also fly under her own power, and hold her breath for six or seven minutes.

Part of her Transit Suit (which was burned out on her first appearance) are the Battle Dress Gloves, which she now wears separately. These contain broad-band sensor arrays, allowing her to search for specific life forms, energies, and temporal/dimensional anomalies.

Cerise has had military and combat training from the Shi’ar. Furthermore, she is a skilled starship navigator and pilot.

Cerise was ’born’ on the planet Shaskofrugnon, a part of the Shi’ar Empire. She appears to have been genetically engineered there, emerging as an adult. As a result, she expressed confusion at the very concept of childhood.

She enlisted in the military, becoming part of the Ghrand Jhar. Cerise served on board an encruitment vessel under the deranged C’efn.

Distraught at the atrocities they carried out as part of their mission to convert planets to join the Empire, and certain that C’efn was insane, she found herself unable to carry out her orders. When C’efn ordered the billions of inhabitants of a planet killed, she sabotaged the ship, sending it into the heart of the planet’s sun. Meanwhile, she fled.

Her shuttle was thrown off course by a resulting solar flare, through a stargate, finding herself in orbit around Earth.

Teleporting down, she was drawn in by the multiversal vortex building up around the lighthouse base of Excalibur. Cerise soon received an invitation to join, which she accepted. She discovered a mutual attraction with Nightcrawler, and the two soon became involved.

Her history as a Shi’ar didn’t seem to be the original intention for the character.

Nightcrawler states when she first appears that her tech is like nothing he’s ever seen before, yet he’s had plenty of exposure to Shi’ar tech in the past, and has probably fixed some used at Xavier’s mansion.

Also the Shi’ar references only appear the issue after Alan Davis (her creator) leaves, in the story which gets her off the team.

Alongside Excalibur she fought Necrom and the Anti-Phoenix, preventing the destruction of the multiverse. Cerise also helped battle the likes of Jamie Braddock and Sat-Yr-9, Troll Associates, and the Crazy Gang. Meeting the extradimensional Khaos, whom she felt an attraction to, she and Excalibur helped him battle his foe Ghath, on Earth and then on the pair’s homeworld Irth.

They defeated the sorcerer Ghath. But his curse kicked in as Excalibur returned home, as Khaos was also banished with them. Unable to return home, Cerise offered him a place in Excalibur, but he rebuffed the offer, taking off to seek a way home.

She soon accompanied the rest of Excalibur on a journey into the future Rachel Summers (Phoenix) had come from, where they teamed up with some of the local resistance. Cerise flew them across the Atlantic in a hollowed out Sentinel, where they succeeded in infiltrating the Sentinel’s main base.

Fighting their way to the captured Phoenix, they managed to reprogram the prime directives of all Sentinels, forcing them to protect all life.

Soon after, she was taken into custody by the Starjammers, acting under Lilandra’s orders. They escorted her back to the Shi’ar Empire, where she had been sentenced in absentia for her crimes. Cerise was sent to the subterranean prison Krag. While there she was attacked by the second Fang, whom she had to kill to survive. 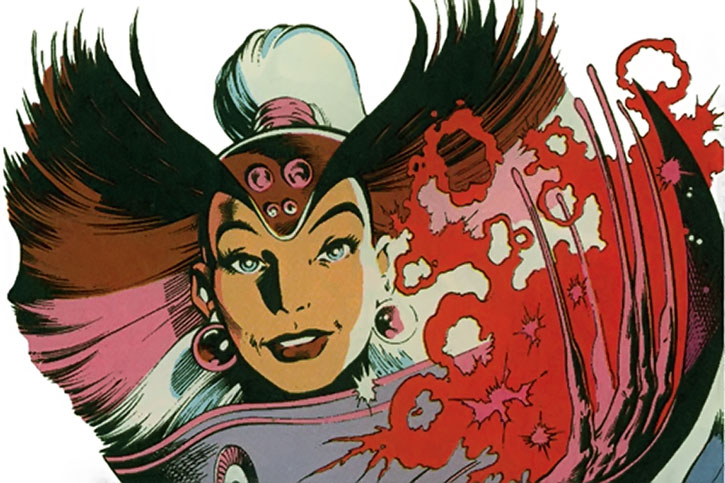 Excalibur arrived just as she killed her enemy, intending to rescue her. Nightcrawler was shocked by her actions. Lilandra interceded on learning the full details of the case, allowing her to serve the remainder of her time as a personal agent. cerise would investigate reports of brutality and violence among Shi’ar officials, and report directly to Lilandra.

She briefly returned to Earth when it had been assigned as an interplanetary prison planet. Cerise was dispatched by Lilandra to contact the X-Men, and thus met Nightcrawler again. He was, at this point, training to be a priest, so they had no chance to resume their previous relationship.

She later became a member of the Graces, a group of female warriors led by Gamora. It is unrevealed what the status of her service to Lilandra is at this point. They were based on the planet Godthab, but were forced to leave when the Annihilation Wave hit.

They joined the forces battling the Wave, and were eventually successful in halting its advance.

Engineered to be a soldier, calm and professional in action, Cerise nevertheless seeks a more peaceful life. Thus, she would rather avoid violence if possible. She found her urges to protect innocents greater than the loyalty to the army she had been born and indoctrinated into.

Friendly and a loyal team mate, she was nevertheless quiet on the subject of her past. She found life on Earth strange, and would often be confused by local customs, although she did develop a liking for the “lip-massage” greeting.

“I am Cerise. Warrior of the Ghrand Jhar. Genestock of Subruki, Zarstok and Kuli Ka. Mine is the power to generate malleable energy fields of coherent light force that obey my will.”

A Thanagarian trooper who became disillusioned by the actions she was forced to take, she fled after destroying the ship she’d served on. He flight was interrupted as she was captured by the Zamorans, and used to experiment with the energies of the Star Sapphire.

They imbued her with the energies, but the surge of power overrode their restraints and her mind, leaving her with false memories of being an explorer from another dimension. It also transported her across the universe, ending up on Earth.

She met and joined Outsiders, and became attracted to Geo-Force. She was later found by both the Thangarians and the Zamorans, and learned her true history. She was uncertain whether the feelings she’d had for Geo-Force were real, or a product of the powers influencing her.

She left with the Zamorans, who promised to help her gain more control over her new abilities.

When she initially appeared, she wore a Transit Suit, a bulky suit of armour which allowed her to teleport to the surface from her stolen shuttle.

The suit’s teleportational circuits were burned out by her initial appearance. Howbeit, the technology contained in the Battle Dress Gloves, which were part of the suit, were undamaged. While she did wear it later, it’s unclear whether or not it had been repaired.

If you decide to drop or de-retcon[glos] her Shi’ar history in favour of her original stated background, then the suit should probably have Dimensional Travel, as well.

She hasn’t used her Force Manipulation for more than creating solid objects, lifting heavy objects and flying with them. It’s unclear whether or not she duplicate any other powers with it.

I haven’t included a Limitation, since I believe this is only due to lack of exposure in her appearances. But if you wish to limit her more strictly to what’s shown, then she should have the Limitation ’Force Manipulation constructs may not have any Powers except Flight‘. 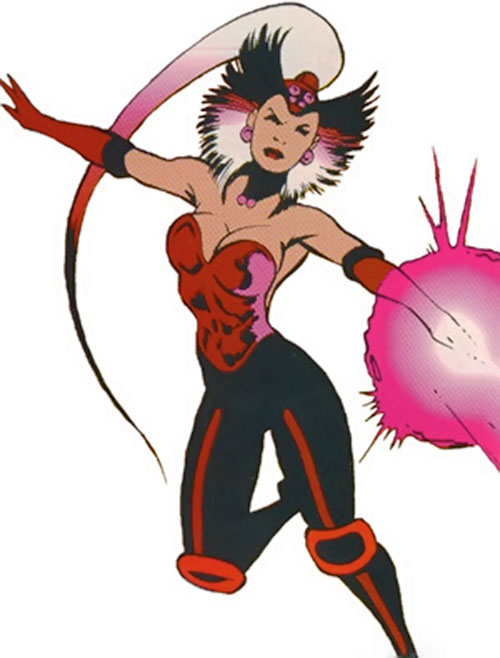 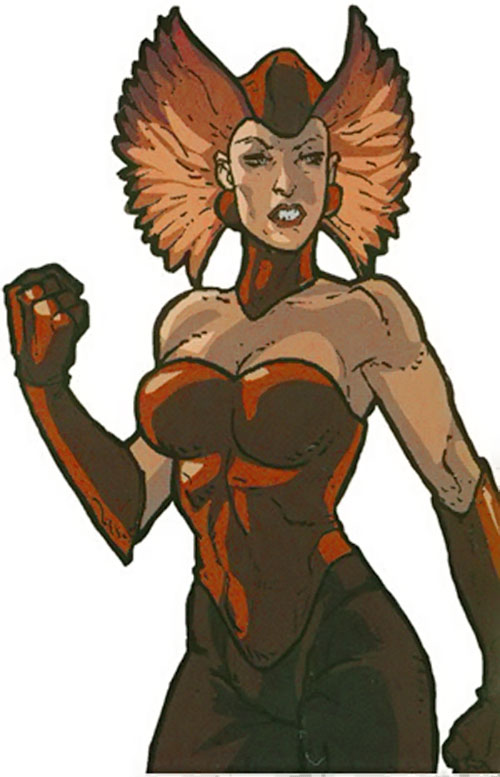 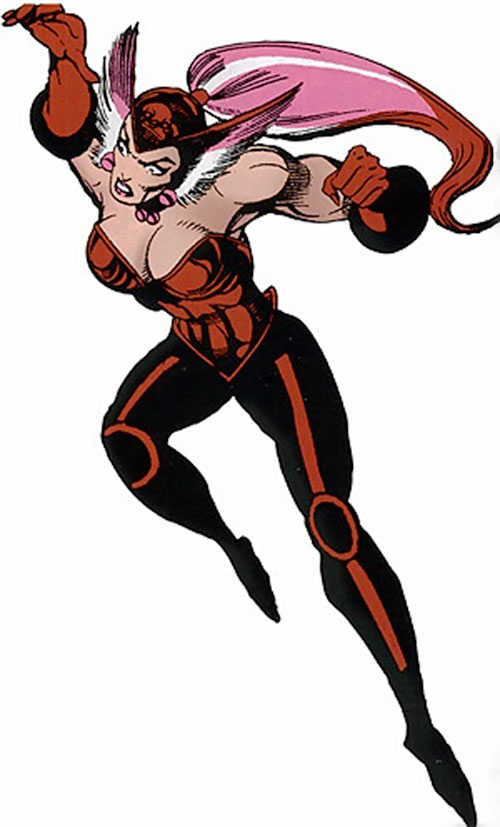