The Chainsaw Warrior is a top-notch soldier with a long and successful SPECOPs career. He’s the best SOCOM has to offer. The equipment he wears for the 2032 mission is tailored for extremely brutal close combat against inhuman opponents.

The chainsaw, particularly, doesn’t need ammo, is devastating and is well suited to close encounters with zombies and the like. These do not have distance weapons or powers.

In the year 2032, a strange warp in the continuum opened in the old Municipal Building in the heart of Old Manhattan. Bizarre creatures came flooding through into our own dimension . Goading them on was Darkness, a malevolent entity. Darkness intended to draw the whole city of New York through the warp.

The first squad of army troops who tried to assail Darkness’s stronghold were engaged by zombies, monstrously warped humans, mutant rats, and insane cultists. These wiped out the entire team. An airstrike was called off when radioactivity was detected. The military feared that explosions would throw that material into the air and contaminate the city.

Instead, nerve gas was dropped in. Then a second squad went in to reconnoiter. The enemy remained strong and this team fared little better. Still, but a single man made it out alive.

Break out the big guns

Then SOCOM brought their “special guy”, the so-called Chainsaw Warrior, out of retirement. Equipped with the latest high-tech equipment, he was assigned to shear his way into the very heart of Darkness’s domain. The Warrior was to defeat it within an hour in order to prevent it from destroying New York. 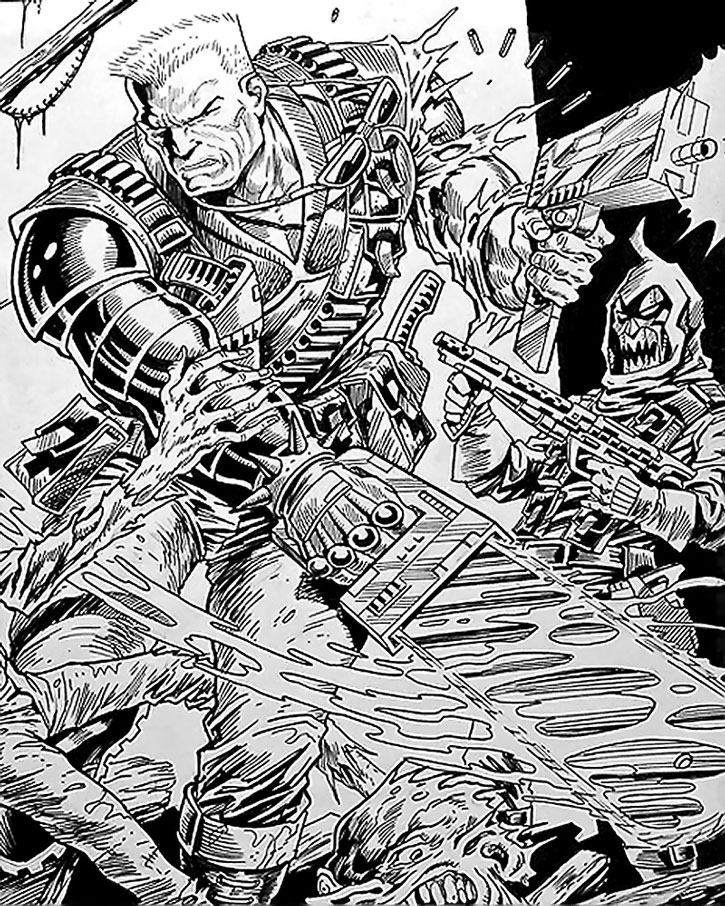 Confronting all of the threats above plus various booby-traps, an engulfing acidic slime, and a bizarre cyborg dubbed “Meat Machine”, the Chainsaw Warrior finally worked his way in to confronting Darkness itself. He destroyed the evil being and saved New York.(Chainsaw Warrior)

Now that the Warrior had been drawn out of retirement, another mission awaited him. He was being sent to a remote Alpine fortress to retrieve a “certain old spear” guarded by Neo-Nazi fanatics, SS Revenants, and vampires led by another shadowy menace… (from the designer’s notes, alluding to a sequel that was never published.)

The Warrior’s broad-shouldered, heavily-muscled build is perfectly capped by his wide block-jawed face, which is in a perpetual grimace. Even though he is retired, the Warrior keeps his hair trimmed in a tight flattop.

When on a mission he wears olive-drab or tiger-stripe camo fatigues, heavy army boots, heavy black carapace armor with a utility harness, and thick steel-reinforced gloves.

Pure military. The Chainsaw Warrior is a massively disciplined and efficient killing machine. He has a low tolerance for secrets or anything else that interferes with the effective completion of his mission. He took the ideas of spatial warping and cross-dimensional  incursions in stride, even though he had no previous familiarity with the concepts.

That equanimity likely reflects the Warrior’s singular focus on the work at hand. So long as he knows the target and the task, and has the tools, he is not going be distracted by irrelevancies such as the existential horror of hitherto-unknown entities forcing humanity to re-evaluate its place in the cosmos.

Sargeant: “You ever hear of something called spatial warping ?”
Warrior: “No, never.” (Proceeds to watch expressionlessly and without comment as the sergeant shows him video of zombies and mutants wiping out a squad of soldiers).

Chainsaw Warrior: “I’ve been in the field too long to not know when something’s wrong.”
Colonel Miller: “I don’t know what you mean…”
Warrior: “…You’re holding back ! I know it and you better get it through that thick head of yours that I won’t go in until I know *everything*.”
(Later…)
Warrior: “What kind of man are you that you’d send me in there with so much left unsaid ?”
Miller: “Just following orders, son, just following orders.”
Warrior: “I promise you, colonel… When I get out of this, I’ll come back and finish what I started five years ago in Singapore. And this time there won’t be any Aussie MPs — anybody — to help you.”
Miller: “I’ll be waiting, soldier, but I’m not going to hold my breath. I’ve seen what you’re up against.”
Warrior: “I’ll be back. You’ve got an hour to find somewhere to hide.”

All of the equipment the Warrior uses can be produced in the DCU at equal or higher quality. An interesting context to use him would be an adventure where everyone is depowered (such as happened at the end of Invasion ). That would make it logical for the military to send a normal human instead of a superhuman soldier.

Most major militaries in the DCU would probably have several men like the Chainsaw Warrior. Namely, “best of the best” elite soldiers on the cusp between cinematic action hero and superhero. These are not quite skilled enough to be made into costumed government agents but certain to be deployed whenever superheroes are needed but not available. 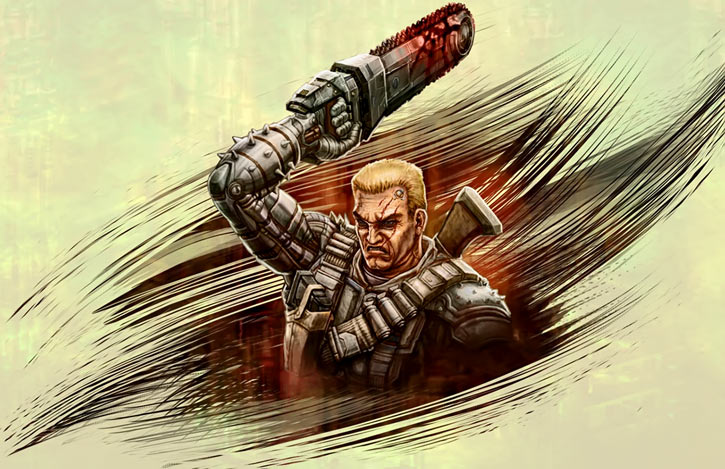 These warriors could be sent out alone or in small groups. Up to half a dozen at the absolute most and even that number only available to the largest, best-equipped militaries. In the latter case, each Warrior would likely have a different specialty from the “Luck of the Draw,”.

The leader of the group would have two specialties ala “You Won the Lottery”, Leadership and 20 extra HPs.

The individual or the group as a whole might be selected on basis of specific prior experience. For example, a couple of warriors who had previously dealt with an inter-dimensional invasion such as the one in the board game might be paired up to stop a similar incursion by mystical entities if the need arose. Such Warriors might even have acquired Expertises relating to combating such threats.

See also our article on the Human Defense Corps.

Luck of the Draw

Just like in the board game, you never quite know what you’re getting when you call in…The Chainsaw Warrior ! Each time you introduce the character anew, roll 1D10 and check the result below:

Tools of the Trade

Though the Warrior usually preferred the automatic rifle, he sometimes used one of the below weapons instead:

Before his retirement, the Chainsaw Warrior would have had both Medium Credentials and a High Connection with SOCOM. Since he apparently comes out of retirement after the encounter with Darkness (see History for details), he might acquire these Advantages again. 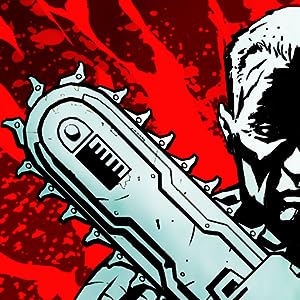 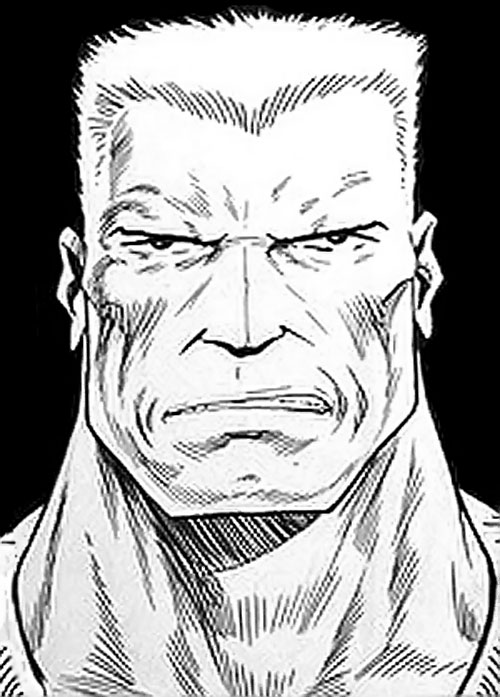 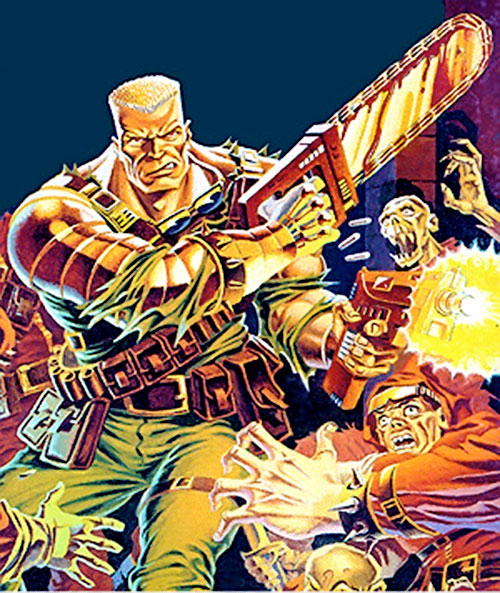 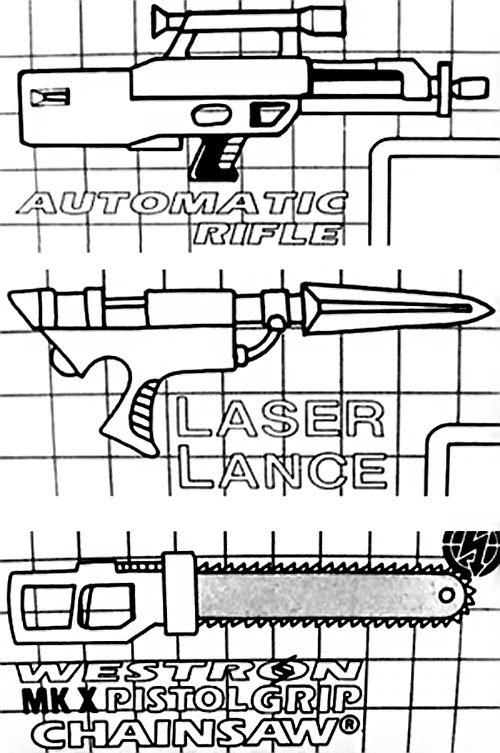 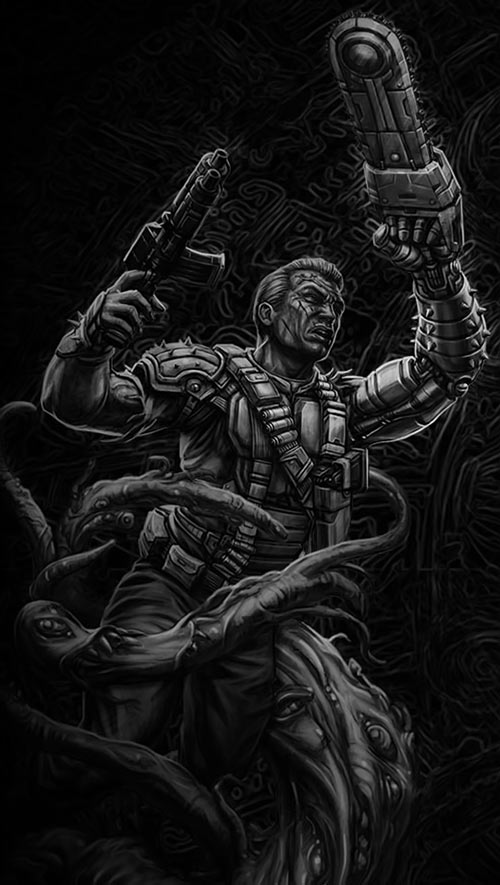 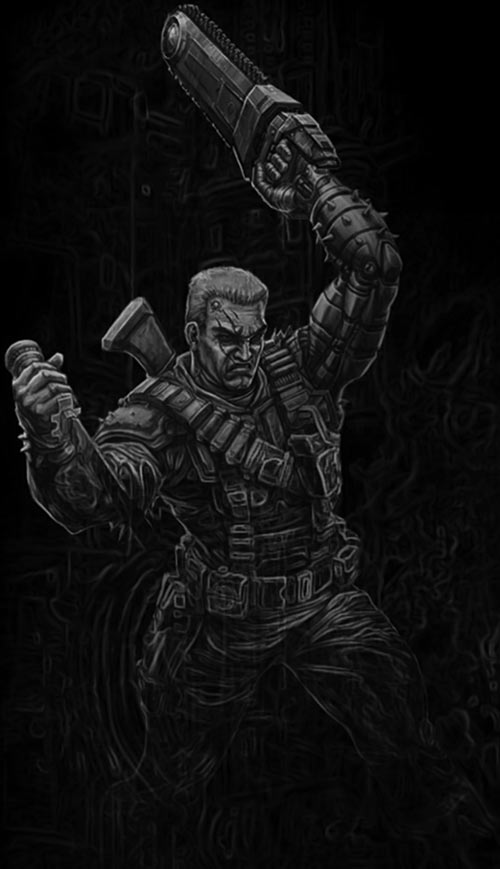 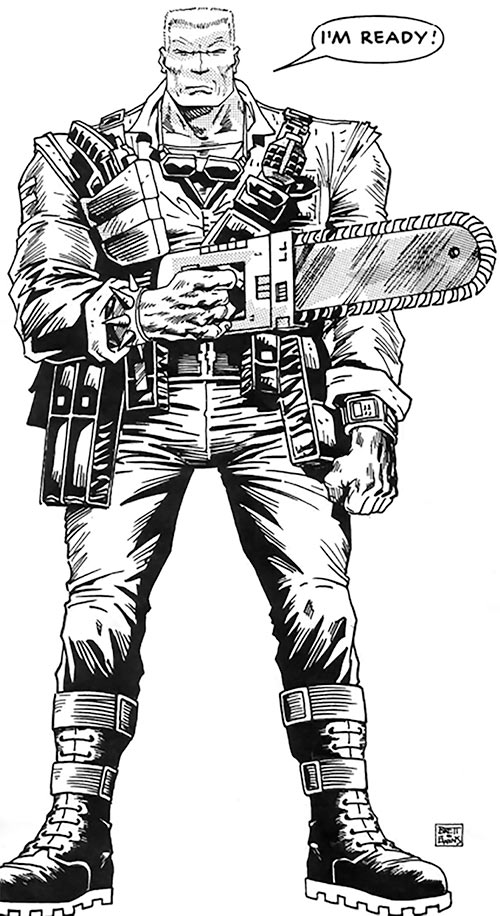