WHAT’S OUT THERE ? — Places we cannot see ! Things we fear to touch ! Sounds that do not belong to this world ! Riddles of the ages, lurking beyond the bridge without a name ! Only men living on borrowed time would dare to cross that bridge !

The Challengers of the Unknown appeared in early 1957. They were one of Jack “the King” Kirby’s contributions to DC Comics.

The Challs played a curious role in the history of super-hero comics :

Here are such men and their incredible adventures !

After that the King leaves DC for Marvel, turning it into a storytelling powerhouse along with Lee, Ditko et al.

The Challs’ adventures continued for years, but there ain’t no digital reissue for the post-Kirby era yet. Therefore, this profile doesn’t draw *any* material from later books.

This article has S P O I L E R S for all these stories.

This profile is presented in two parts, due to length. Though we describe each storyline within but a few sentences, we’re still dealing with a 322-pages collection.

The four Challs are world-famous adventurers, each with their specialities. They work remarkably well together.

Their main schtick is that they “live on borrowed time”. That is, they should by all rights be dead.

Knowing this makes them fearless. The Challs unhesitatingly brave the worst risks, and stay amazingly collected whilst doing so.

This fearlessness imbues them with a high degree of narrative immunity. The Challs miraculously escape death with about the same frequency as I eat chocolate chip cookies. In DC Heroes RPG terms, their “borrowed time” hook means a high amount of Hero pointsDC Heroes RPG concept expressing narrative importance/immunity.

As an organisation, the Challs can easily afford the equipment they need. They have enough moolah that renting a long-haul cargo plane poses little difficulty.

They often fight bare-handed. Weapons tend to only be used when there’s a specific danger, or when they enter wilderness with large predators. And even if they are armed, they’ll go to great lengths not to shoot people. 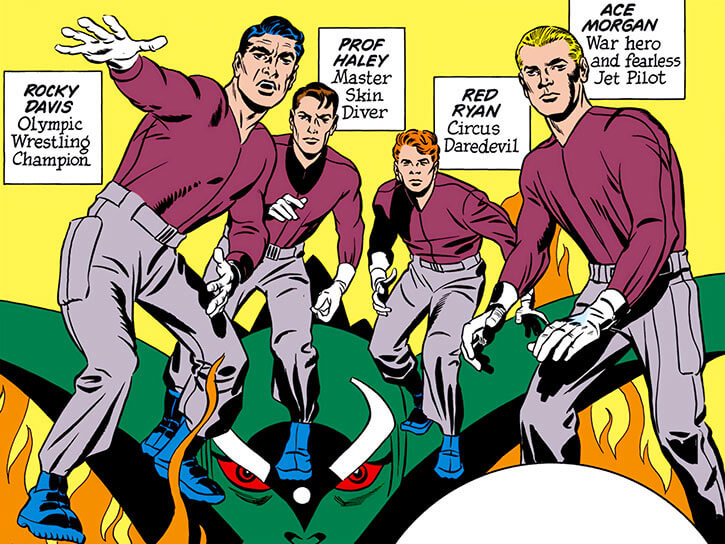 This is because the characters follow pre-Marvel Age writing styles. They are wooden archetypes having dynamic adventures, and there ain’t much characterisation.

Really, it’s a good thing they all have different hair colours to quickly tell them apart. And even then there’s an occasional colouring mistake switching the characters.

They’re always honourable, sworn to save lives, and are eager to take risks if necessary. Or even just if it sounds fun.

They talk like white hat tough guys in a 1950s movie. Like cowboys or soldiers or some such.

Challenges, altruism, science and mysteries are their only apparent interests.

When there’s a major risk to be taken, but only one of them can go in, the Challs draw straws.

Save the haw-haws until later, chums !

They have endless cunning plans. They always win and they know it. They’re always ethical. And they are utterly dedicated to the team and facing challenges.

And yes, they frequently call each other “chum”.

The Challs will often make a show of how the current case is incredible, and how they would never have believed it had not a trusted contact alerted them.

Yet in action, they readily accept and adapt to even the oddest occurrences. So it’s magic ? Sure, OK, magic. Let’s go men ! This magic device must never fall into the wrong hands ! 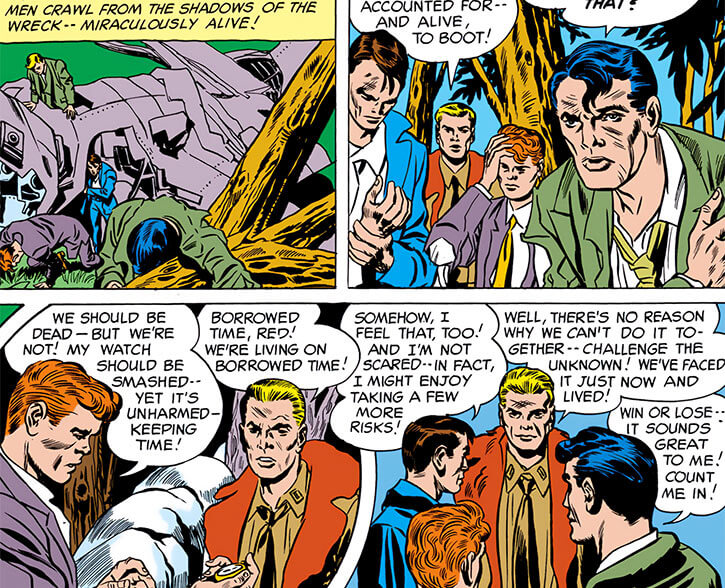 True to his name, he was credited with 19 victories against MiGs.

One of his expertises is testing equipment at extreme heights, on the threshold of space. One bit of dialogue also implies that he’s an aerospace engineer, dreaming of designing a space-capable aircraft.

Over time, Ace emerges as the informal leader. He doesn’t bark orders, but when there’s a decision to be taken and it’s not within one of the Challs’ clear expertise, the process defaults to Mr. Morgan.

This extremely well-read academic is renowned as a master skin diver. He also often mans bathyscaphes to explore extreme depths.

Prof is of course the one who will come up with the uncannily correct deductions.

Described as a circus daredevil, and in extraordinary physical shape, Red seems to have the broadest physical and practical skills base.

He often does extreme mountaineering. When the challenge of the day *just happens* to match the Challs’ specialities, Red’s will usually be about climbing.

This champion wrestler and boxer also seems to be a former soldier.

He’s eager to test his extraordinary strength and stamina. That includes the likes of fighting crocodiles or bears with his bare hands.

Rocky is exceptionally curious and hungry for action. That makes him impulsive, and occasionally reckless. That he survived that long with such traits is a testament to his skills and strength.

Dr. Robbins is the unofficial “fifth Challenger”, like d’Artagnan was the “fourth Musketeer”.

She’s a senior computer science researcher, and the director of an unspecified lab. She pops up every fourth adventure or so.

June is the opposite of a shrinking violet. She’s fed up with being underestimated, and has a sharp intelligence and strong Enlightenment  stance.

The male Challs tend to keep her out of the action “for her own safety”. But she may well decide to work her way around that.

Up until the 1960s or so, software was contemptuously seen as women’s work. The bulk of the labour was meticulous, repetitive calculations and manipulations. Working in hardware was far more prestigious.

Many software pioneers, from the irrepressible Grace Hopper  to Margaret Hamilton  , were thus women. To have a governmental late 1950s CS expert be a woman is thus unsurprising.

But at the same time the surprise of the Challs when meeting Dr. Robbins is credible. Few people thought much about software.

These stories twice use a genre convention of the day. That is, if you feed all the data to a super-computer like the ones June runs, it will spit out a prophecy.

It will be a brief and somewhat enigmatic prediction that everyone will treat as being absolutely true. Because the computer said it.

“A Challenger must die to defeat this creature” would be a suitably dramatic example.

Since this augury is 100% reliable, June is aware that it can be manipulated. Typical approaches would be to play on the exact wording of the oracle.

Or to introduce an x-factor through her own actions, which means the prophecy no longer has to be true since circumstances have changed due to an outside agent. 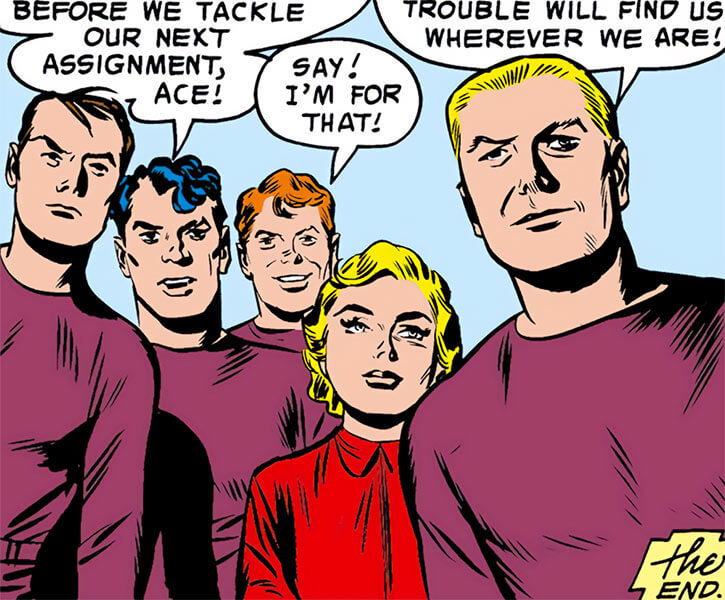 This Elvis bloke was pretty big. You may have heard of him.

The story opens with four ladies. These were invited on the famous radio program “Heroes”, to talk about their exploits.

Now, obviously, the story cannot be about women. It’s about the men who are invited on the next edition of “Heroes”.

(Fairness requires that I point out that Kirby and his bud Joe Simon  created the romance comic books genre in ’47. These were enormously successful and often had a woman as the protagonist.)

These four famous adventurers do not know each other. They meet as they board the plane that’ll take them to the radio studio for the show.

But as they fly across a storm, the private jet’s controls lock. Even Ace Morgan cannot prevent a brutal crash.

Yet all four survive without major wounds. Crawling from the wreckage, Red Ryan notes that the impact was so bad that it stopped his wristwatch. This inspires Morgan to declare that they now live on borrowed time.

As the conversation unfolds, the four men decide to team up and see how far they can challenge the odds. 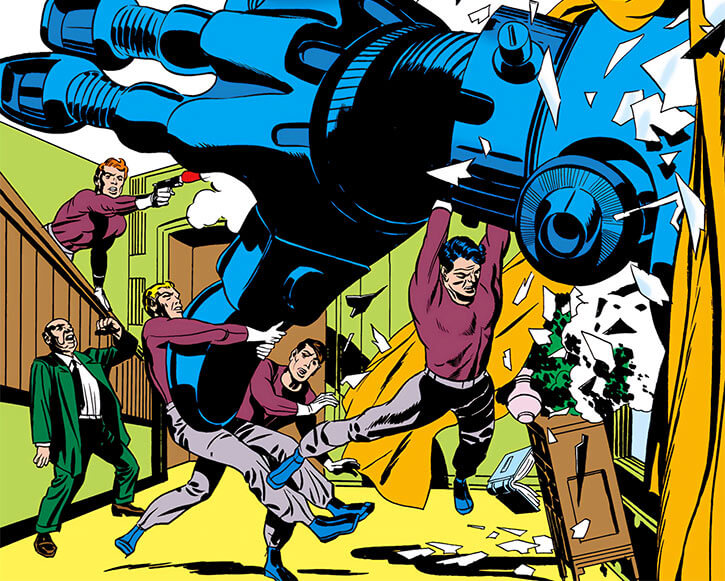 The most unique organisation on Earth !

The newly formed Challengers made it their speciality to tackle impossible odds, unknown perils and abnormal threats.

They sometimes worked solo in their speciality, or as a quartet for major challenges.

Part of the income went to support themselves, and the rest to charities.

Mr. Morelian was old European nobility. His entire ancestral castle had been moved to the US. He came from a long line of warlocks, and wielded magic powers.

Morelian dared the Challengers to open the four chambers of a mystical box. He paid them two cool millions ($17.5M in 2019 USD) to brave its mystical perils.

To limit risks, the Challs flew the mysterious box to a remote, tiny Pacific Island. As they opened the chambers, great menaces came out.

As Morelian left, his plane went into a spin and fatally crashed onto the sorcerer’s box.

The words describing the ring were ambiguous. As it turned out, their actual meaning was that the *box*, not the ring, held immortality ! 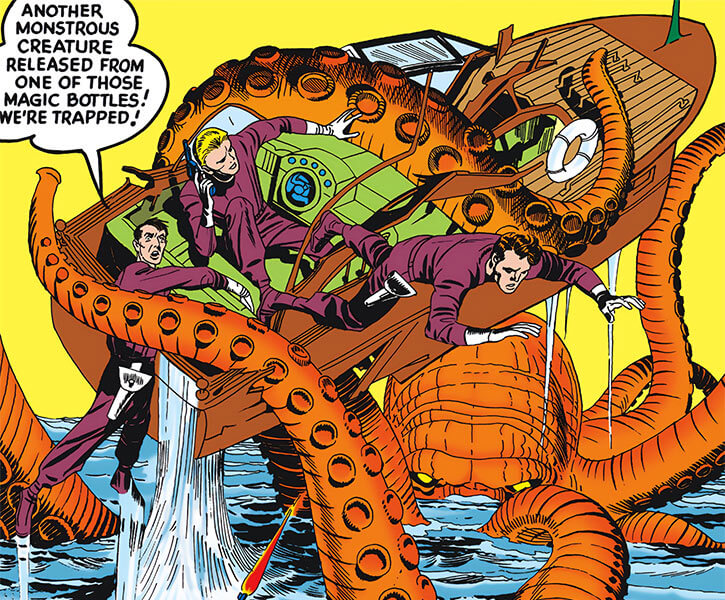 As the Challs were going through their mail, panicked Nazi engineer Felix Hesse rushed in. He begged for their protection.

Imprisoned in the US for years, Hesse had become embroiled in a plan by his cellmate Floyd Barker. They had built Ultivac, a super-advanced calculator. But the machine animated as a giant robot, which chased and caught Hesse.

Ultivac briefly captured Red and June, but they allied with Barker and Hesse to fell the confused robot.

The two criminals then decided to turn the immobile Ultivac into an attraction for a quick buck.

But Ultivac telepathically beseeched Dr. Robbins for help. He eventually ran off, holding June King Kong style. Though there were attempts by the Challs and the military to stop Ultivac, Dr. Robbins convinced the robot to parley instead.

Her initiative was successful, but Hesse and Barker attacked. In the fray, Ultivac was severely damaged by Hesse’s super-pistol.

Rocky was also thought dead for a short time, and the Challengers agreed to have June replace him.

When Rocky was saved using new cardiac massage techniques, Dr. Robbins remained an associate of the group. But she did not immediately participate in adventures.

She also repurposed what was left of Ultivac as a super-calculator. 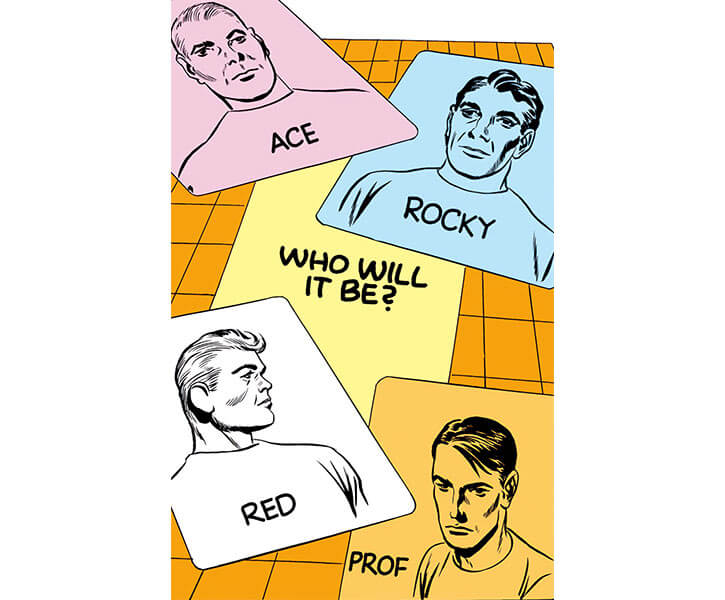 While looking for two missing researchers deep in the Antarctic, the Challs were captured by the Tyrans. These were advanced, militaristic space aliens.

Inevitably, they had a plan to ravage Earth, altering its gravity to suit their needs.

With their super-tech and all-calculating dual brains, the Tyrans seemed invincible. But the Challs tricked one into getting hypnotised by Ace.

They took over the base by raising its gravity back to 1G, then used alien tech to teleport to Washington, D.C.. From there :

By this point, the Challs’ efforts had so weakened the Tyran expeditionary force they could be finished off by a combined branches bombers raid. This was hidden from the public by passing it as unusual military tests.

Whilst chasing international spy Karnak across the Atlantic, the Challs and their quarry discovered a tiny island.

There, one Professor Amos Hunter had been studying relics from an advanced, lost prehistoric civilisation. This society had been dominated by evil alchemists, whose experiments precipitated the end of their people.

Prof. Hunter had found several of their magical liquids. He had moved to an isolated island as he feared the risk that studying these vials represented.

Karnak used the vials to attempt to stop the Challs :

Realising that the hollow clones had little initiative, the Challs trailed one to the real Karnak. Trapped, Karnak drank the fifth and final vial. But it was an antidote of sorts, which took away his cloning power. 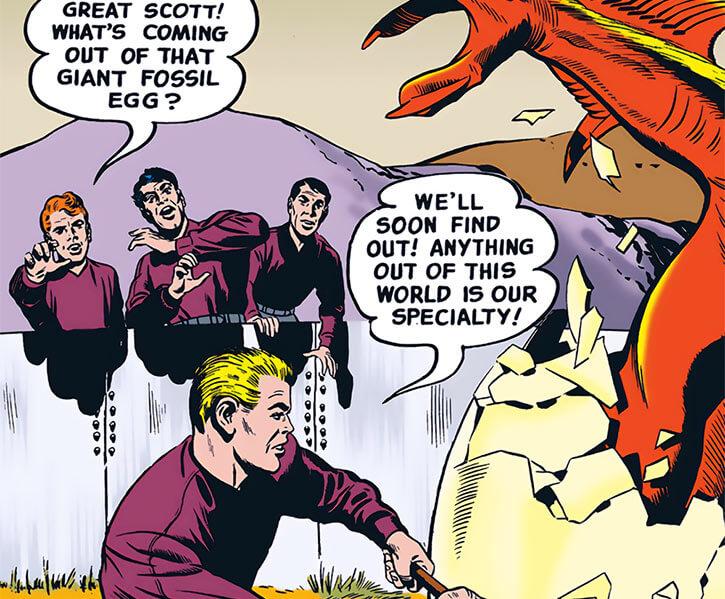 You can take a break here if you want, chums ! Perhaps drink a glass of water !

The second part of this article has the remainder of the adventures, the stats, and numerous notes.

Source of Character: The Challengers of the Unknown by Jack Kirby collected reedition.