Chameleon Chief claims that he is not a Durlan. But he usually mimics a Durlan’s standard humanoid form (minus antennae), and like Durlans is a shapeshifter. Chameleon Chief can shapechange into any animal, terrestrial or otherwise, or imitate any object (in DC Heroes RPG terms Shape Change, Self-Manipulation).

He can also imitate the appearance of other humanoids, though he does not gain any special Powers they may possess (Chameleon). 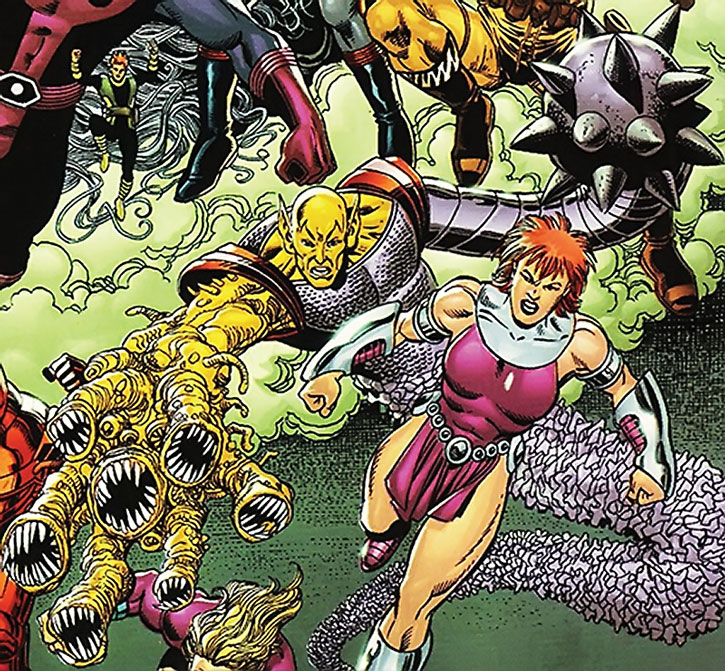 Chameleon Chief is not a mere imitator of other shapes. He is also able to alter his body into forms from his own imagination. For instance, he is particularly adept at stretching his form or changing the bulk and appearance of his arms to give him greater physical power and strength (Stretching, Omni-Arm).

On occasion he has also demonstrated a power not common to Durlans, the ability to change the forms of other objects by touching them (Matter Manipulation).

Chameleon Chief is a fair actor, which enhances his disguises (Artist/Actor). As a native of the 30th century he is comfortable with space travel (Vehicles (Space)). He also has access to LSV technology which allows him to fly and survive in space or other hostile environments.

Chameleon Chief is something of a mystery. His shapeshifting powers and his normal appearance – bald, orange-skinned, pointed ears – would seem to indicate that he is a Durlan, but he lacks the distinctive Durlan antennae. Some few reports indicate that he has been seen with antennae, but most recorded appearances dispute that.

It is known that Chameleon Chief possess a distinct power not common to Durlans, the ability to change the shape and appearance of objects that he touches. The limits and origin of this ability are unknown.

Just as Chameleon Chief’s origin and exact powers are unclear, so too are his motivations. He first appeared on Earth in 2981 A.D. as a key member of the newly reforming Legion of Super-Villains.

Chameleon Chief’s shapeshifting powers were key to the LSV’s plot. They were attempting to assassinate peace-trophy winner Dr. Larx Kenrik, along with several members of the Legion of Super-Heroes. The peace-trophy was due to be ceremonially presented to Dr. Kenrik by the Legion with galaxy-wide news coverage, and was being guarded by the LSH prior to the ceremony.

The trophy was carefully scanned for contraband, but Chameleon Chief had transformed himself into the trophy stand. He was carried into LSH H.Q. in that form. After committing his sabotage, he used his unique power to change the shape of objects to transform a packing crate into a duplicate of the stand he had impersonated, and prepared to make his escape.

He was discovered at the last moment by Chameleon Boy, who sounded the alarm. Chameleon Chief was captured and imprisoned. Chameleon Boy took his place and was carried back to LSV Headquarters, enabling the LSH to track down and imprison all the LSVers, who were sent to prison.

How Chameleon Chief met the LSV and why he joined them has never been made clear. It appears that he simply seeks power, though in subsequent appearances he has talked of seeking revenge for past defeats. In any case, he remained imprisoned for several years on the prison planetoid of Takron-Galtos. 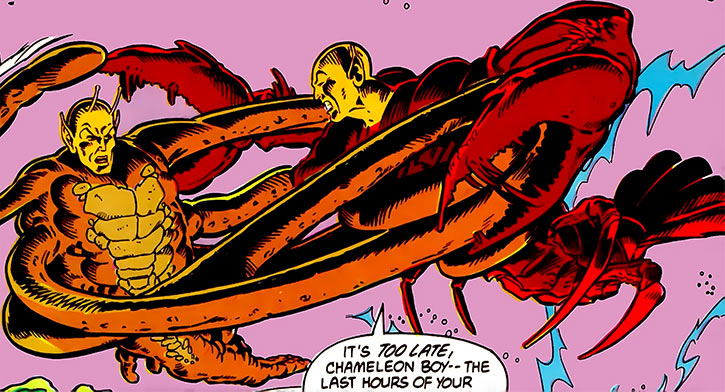 Some of his teammates, notably Nemesis Kid and Lightning Lord, managed to free themselves at various times. They began reorganizing the LSV, this time under Nemesis Kid’s leadership. Nemesis Kid recruited a teleporter named Zymyr into the group, and Zymyr rescued Chameleon Chief and several other supervillains from prison in 2985.

Chameleon Chief rejoined the LSV and took part in its conquest of Orando, the homeworld of retired Legionnaire Queen Projectra. Eventually the LSV was defeated again. Chameleon Chief was one of the last to be captured. His disguise as a rock was revealed by the White Witch, and he was taken back to Takron-Galtos.

He remained on that planet had to be evacuated during the Crisis on Infinite Earths, in 2986. During the evacuation he was apparently part of a mass escape attempt of a prison shuttle, but the Legion of Super-Heroes managed to recapture all the prisoners. They then saw them safely incarcerated on the new United Planets prison-world of Labyrinth.

It should be noted that the shapeshifter wearing Chameleon Chief’s costume during that escape attempt had the distinctive Durlan antennae – whether or not it was the true Chameleon Chief is unclear, but Chameleon Chief has not turned up since, so it is presumed that he is safely incarcerated.

During the mostly unchronicled Five Year Gap timeline, Chameleon Chief apparently escaped from prison along with many other LSVers. He clashed once again with the LSH, some time in 2989. He was one of the few LSVers to escape imprisonment after that defeat. He then made his way to Khundish territory where he hired himself out to the Khundish army.

He served with their mercenary forces, clashing again with the Legion of Super-Heroes during the Khunds’ attacks against Starfinger and Weber’s World in 2996. He has since been returned to prison in United Planets territory.

As noted, Chameleon Chief has orange skin, is bald, and has pointed ears. He looks very much like Chameleon Boy but (usually) has no antennae. His costume is purple with red gloves and boots.

Arrogant and conceited, Chameleon Chief is given to gloating, talking big, and making threats. He is relatively brave though, and doesn’t back down in a fight. He tends to pair off against Chameleon Boy when the two Legions clash, but hasn’t really shown any more hatred for Cham than for any other Legionnaire.

His pride certainly pushes him to want to see the LSH defeated, but his ultimate goal seemingly is power. He will ally himself with whoever seems most able to help him achieve that goal.

“It’s too late, Chameleon Boy – the last hours of your group have arrived and our revenge is at hand !”

“Your confidence will doom you, Legionnaires !”

“Hug your lover’s corpse a little closer, Projectra – you’ll join him in a grave soon enough.”

Nothing special is needed, really. He’s integrated pretty firmly into the pre-Crisis Legion of Super-Villains, but can be used anywhere.

Note:
Despite similar powers, Chameleon Chief claims not to be Durlan, a claim which is backed by some circumstantial evidence; he may or may not share some Durlan Vulnerabilities. Durlans have a Loss Vulnerability to Cancelite (all powers, 0 AP range, leaves the shapechanger stuck in his/her/its current form) and to “hard” radiation (15+ APs, RAPs of Damage are subtracted from Current Body Condition and also from each Power).
They also have a Loss Vulnerability that is triggered when their antennae take damage, but this does not apply to Chameleon Chief (most of the time, at least) as he does not have antennae.

Equipment:
Chameleon Chief has access to anti-grav flight tech and to transuits and communication gear for EVA, just like all the LSVers. See the LSH Equipment writeup for details.

1st and 2nd edition DCH publications don’t do a great job modeling the limitations of Durlan and Durlan-like shapechangers, so there are some changes from what you may have seen in previous writeups.

This writeup stats Chameleon Chief as if he truly is not a Durlan, but there’s a lot of ambiguity about that in the comics. 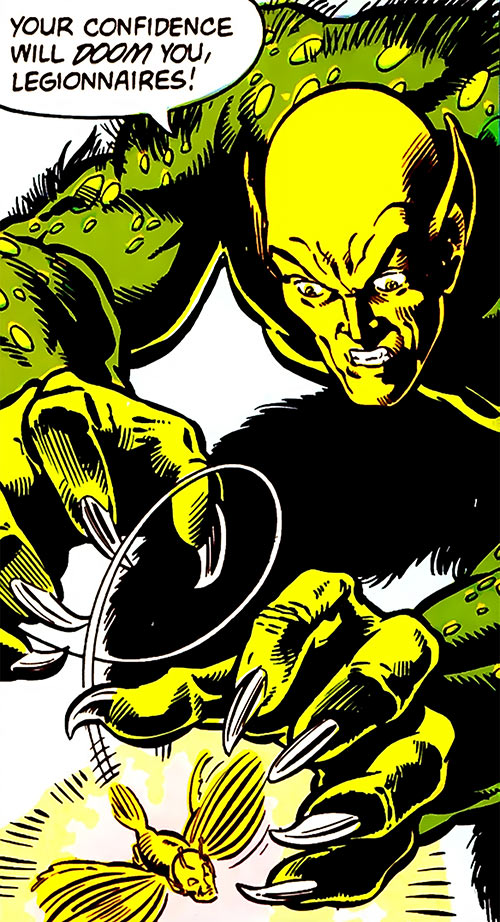 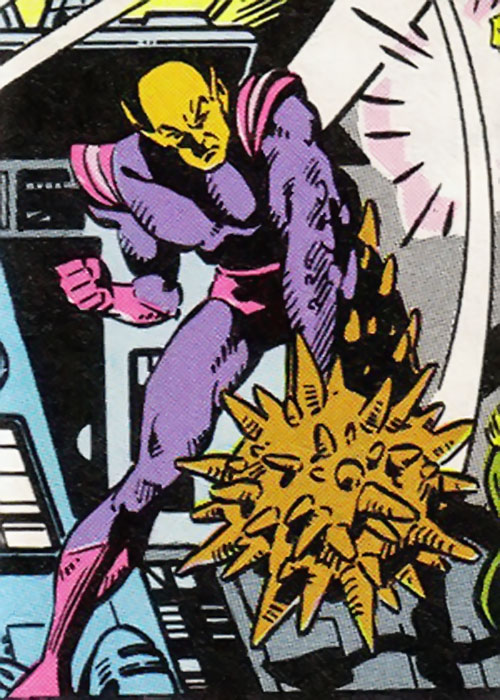 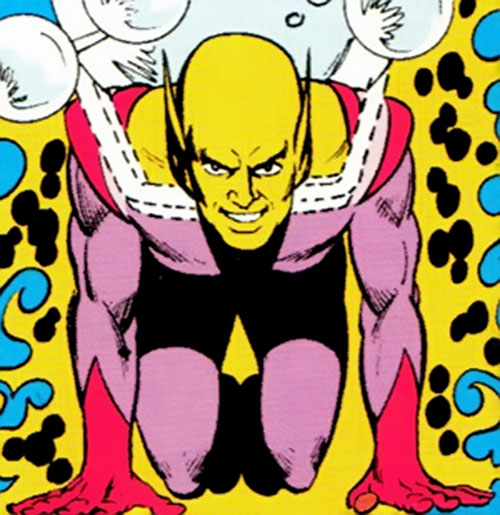 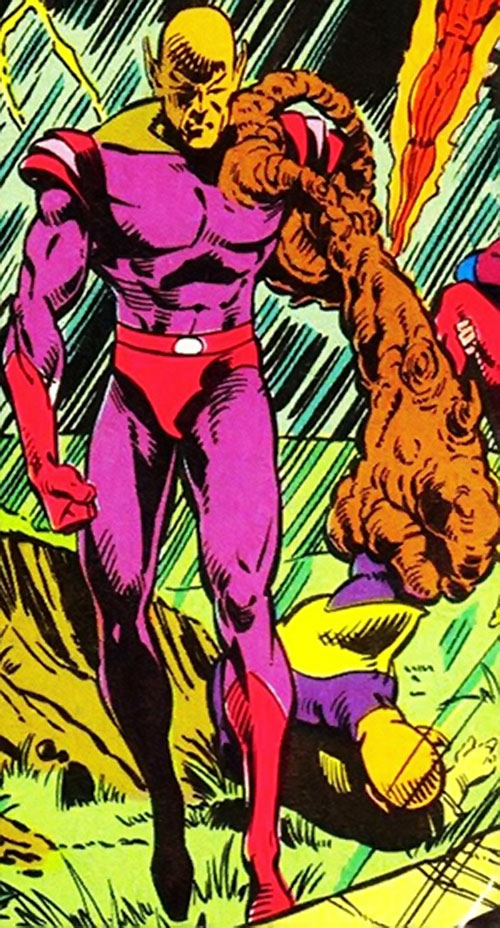 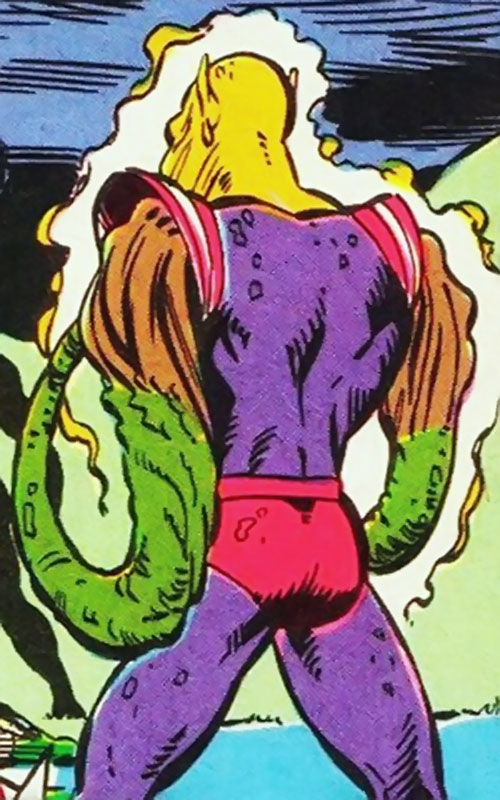 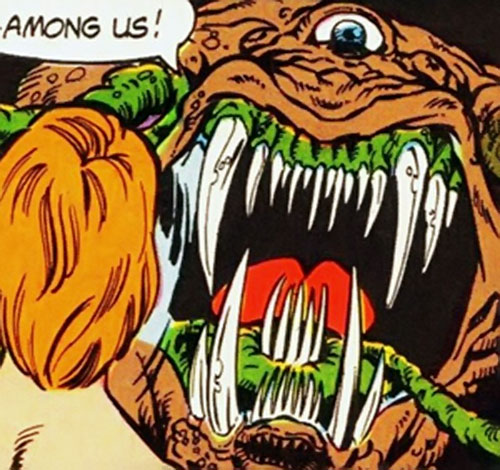