Like all Durlans, Chameleon can transform his body into any shape imaginable.

Durlans, however, mimic form, not function. While Reep could turn into a ship, he wouldn’t be able to fly.

Reep Daggle was born into the priestly class of the religion of his native planet, Durla. For this reason, he was selected to use his Durlan shape-changing powers to represent his planet in the Legion of Super-Heroes; He served under the name Chameleon.

Although Chameleon was originally shunned due to his ignorance of the Interlac language, the friendship of Invisible Kid, who knew Durlan, kept him going. From there, his winning personality managed to win the other Legionnaires over.

Chameleon has also proven himself intelligent and resourceful. He picked up Interlac extremely well for a newcomer to the language, and crossed the communications gap in creative ways.

Shortly after Chameleon joined the Legion, his family was killed by the Composite Man. The Legionnaires, now warmed up to him, have joined him in his grief…and in fighting the creature, who attacked him as well.

Chameleon, as the last surviving member of his clan, has responsibilities on Durla. He will eventually have to address them. But for the meantime, he serves his planet as its Legion representative.

He has also, thanks to training by Invisible Kid, become an excellent spy and speaker of Interlac. This has served the Legion well in the sting operation on President Chu.

Chameleon has long had a crush on Spark and secretly gave her gifts. The secret was recently blown by Invisible Kid, though, and she reacted with revulsion. She has, however, recently come around. But this might be only due to the wish-fulfillment powers of the Emerald Eye of Ekron.

He has recently been asked by the leaders of his planet to return home and fill his rightful position as spiritual leader. Yet Chameleon has been spared that fate, at least temporarily, due to the quick thinking of Invisible Kid.

He has also become extremely friendly with fellow Legionnaire Sensor. However, his efforts to avoid returning to Durla were undermined by this. A night out with Sensor created a scandal. This caused the Durlan holy council to demand his return and an explanation of his actions.

When in his natural, Durlan state, Reep’s body is little more than a mass of green tentacles.

As all Durlans do, Reep hides his face and body with a robe that covers all of it except his hands and “face tentacles”.

When in humanoid form, Reep’s orange skin and antennae are contrasted by his light yellow and blue LSH uniform.

Reep is a fun-loving, courageous Legionnaire. He respects his culture’s beliefs, but feels he could do more for Durla as a Legionnaire than as their High Priest (a title forced upon him with his father’s death). 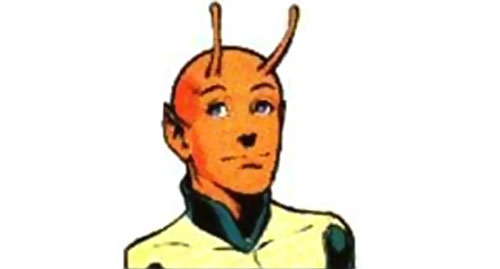