The Chameleon is one of the greatest masters of disguise on Earth. He is a brilliant actor and impressionist, and a master at creating lifelike masks and make-up. Although he may be out of practice, he’s also a remarkable quick-change artist.

Currently, the Chameleon uses his computer belt to take photos from his targets. The computer extrapolates the rest of the appearance if needed, and send electrical signals into the Chameleon’s epidermis that allows him to shift shape to become an exact duplicate. His special clothes follow suit, and he can flawlessly mimic voices.

Aside from these skills, the Chameleon is an excellent espionage agent. Although he’s not extremely intelligent, he’s very cunning and observant, and quite persuasive.

Dmitri Smerdyakov a.k.a. Dmitri Kravinoff was born in a stagnant branch of the old Russian aristocracy. Although everyone maintained the polite pretence he was a full member of the family, everyone except him knew he was a bastard child, fathered by the Kravinoff patriarch on a lowly servant.

He was treated with open contempt and brutality – especially by his older half-brother, whom he sought was his brother : Sergei.

Since as a child he never understood why his family was so mean to him and craved their approval and affection, Dmitri kept denying the truth and repressing bad memories. He was fanatically loyal to his big brother, who treated him as a servant. When Sergei started his career as a great hunter, the Chameleon still found a way to make himself useful, and acted as his agent, selling the furs, ivory, etc. from Sergei’s kills.

He has a talent

Dmitri, trying to draw attention to him, was something of a showman and actor. He used his knack for imitating people to make others laugh. Encouraged by success, he quickly became a formidable impersonator, and later a ground breaking disguise artists, despite his youth. 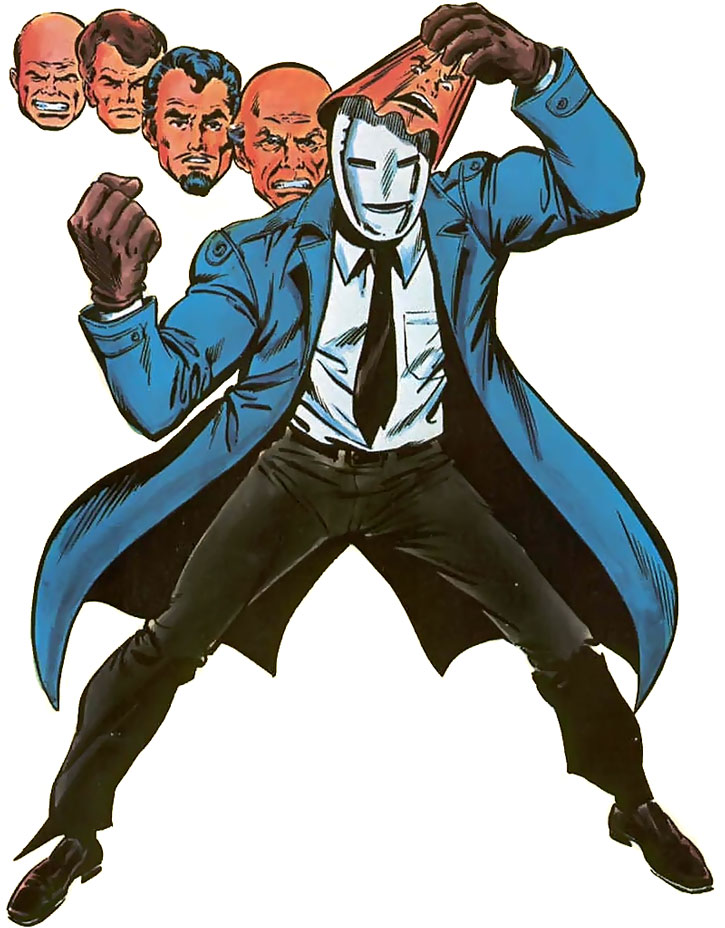 It was apparently while still a teenager that Dmitri became a cunning Soviet spy and disguise artist code-named the Chameleon. The Chameleon was one of the earliest foes of Spider-Man, back when he spied on American interests.

Smerdyakov very nearly framed Spider-Man as a traitor while impersonating him to steal secret US documents. After a few defeats by Spider-Man, the Chameleon wanted revenge and began various criminal plants to take his revenge on the arachnid.

When the first machinations went awry, Dmitri called upon his big brother – now the obsessive, superhuman nimrod named Kraven the Hunter. Kraven started hunting Spider-Man not so much to help the Chameleon, but because he considered Spider-Man a prey worthy of him and capable of challenging his supreme skills.

Kraven quickly became one of Spider-Man’s recurrent nemeses, with or without his half-brother at his side.

After USSR’s fall and Kraven’s suicide, Dmitri went back to the US. His plan was to build a strong power base in order to destroy the country he hated with a passion. Among his first moves was the development of a serum that gave him his superhuman powers, followed by numerous impersonations that allowed him to acquire great financial and scientific resources and lots of underworld contacts.

Chief among those contacts was one of the senior Maggia dons in New York City, Hammerhead.

However, those plans slowed down when Spider-Man realized the Chameleon was back. Smerdyakov attempted to impersonate J. Jonah Jameson in order to discredit Spider-Man, but it ultimately failed. Another attempt was almost successful (by impersonating friendly scientist Dr. Turner in order to take Spider-Man’s powers away), but Spider-Man was saved by the Black Cat.

Then the Chameleon struck again – but this time, his plan was pretty much unstoppable. Harry Osborn, then the Green Goblin II, told him of a way to uncover Spider-Man’s identity. That was to have the news photographer Peter Parker reveal it. While Osborn knew Parker’s secret identity, he didn’t intend to tell the Chameleon.

Osborn suggested the following subterfuge. Create two perfectly lifelike androids pretending to be Peter Parker’s parents, and use them to manipulate Parker into telling them the true name of Spider-Man. Of course, Osborn’s objective in manipulating the Chameleon was simply to hurt Parker on a very personal level.

From the Green Goblin’s point of view, the plan worked admirably. Peter Parker eventually accepted the impostors were his true parents, and was emotionally devastated by the machination. After the fake parents were destroyed, he located the Chameleon in the deserted Kravinoff mansion and hunted him down in a state of bloodthirsty rage.

Being hunted in the mansion by a terrifying opponent triggered flashbacks in the Chameleon. He suddenly accessed his previously repressed memories about Sergei. The villain, now insane, collapsed. He was imprisoned in the US, at the Ravencroft Institute – an asylum for the criminally insane.

The Chameleon, of course, escaped – now obsessed with his vengeance over Spider-Man. He finally managed to capture, drug and unmask Spider-Man, learning his true identity. From there, his plan was two-pronged. Using various means he started brainwashing Parker, convincing the hero he actually was one Herbert Filmore Smith, a failed writer and borderline psychopath living in an asylum.

After destroying Parker’s sense of self and turning him into this wreck, he impersonated him and stole his life. However Parker’s wife, Mary-Jane, gradually came to realize the man sharing her life was *not * her husband.

Despite this horrible turn of events managed to reach a correct decision, assaulting the Chameleon with a baseball bat and unmasking him. Parker was then located and deprogrammed.

The Kravinoff saga of madness and rancor continued when Dmitri was apparently shot to death by Alyosha Kravinoff, Kraven’s son, who was obsessed with the life of his late father. The Chameleon, however, survived the apparently fatal wound. But during a spell of relative lucidity, he then decided to attempt suicide.

He confronted his nemesis Spider-Man at the top of the Brooklyn Bridge — the exact spot where Gwen Stacy died years before — then threw himself into the waters. He, however, somehow survived and was sent to the Ravencroft asylum again.

The insane Chameleon has now entered a mania where he has permanently adopted his late half-brother’s identity, and many of his fighting techniques. Due to his dementia, it is unclear how aware he is that he knows Spider-Man’s secret identity.

His head has a smooth, moulded plastic appearance when he’s not using his powers.

While originally an impetuous, whiny jerk who literally hid behind his big brother (to whom he was but a manservant). But the Chameleon matured a lot over the following years. It is now theorized he was very young during those early adventures, perhaps even a teenager.

Before he became insane, Dmitri Smerdyakov was out to trigger the US’ economic and political collapse. He undertook that grandiose goal carefully and methodically. The building of his power base was most important. He would simply walk away from any failure in order not to endanger everything he has done in a single confrontations. He also sought strategic alliances with influential people such as Hammerhead.

It should be noted that the Chameleon is not normally a killer. Opponents who are still alive are opponents he can later impersonate, and he usually uses non-lethal weaponry. If he must kills, he normally takes care to make the body unidentifiable, so he can use the identity of his victim later on.

Smerdyakov is now completely insane, with a worse lack of a sense of identity than ever. He is pretending full-time that he is his deceased half-brother.

“If at first you don’t succeed, find the nearest airport.”

The Chameleon could retroactively appear in almost any continuity. He’s a Gamemaster dream : you can retroactively decide that he was, or wasn’t, *anybody* the PCs have ever encountered, and he can explain nearly anything you need to advance the plot. Great guy.

He, of course, would have matched wits with Christopher “Human Target” Chance a few times, over the years. Possibly Tom “Nemesis” Tresser, too.

Drawbacks:
Secret ID. After the flashback regarding his youth, the Chameleon acquires a Catastrophic Psychological Instability.

The Chameleon is currently experiencing particularly severe psychological problems, and has decided to claim as his own the identity of his deceased half-brother, Kraven the Hunter. His is training to master Kraven’s hunting techniques, and pouring every spare HP in this. When he’ll finally have learned everything, he will have access to the following abilities :

Bonuses and Limitations:
Paralysis has No Range.

GMs are welcome to adjust exact values between this potential skills and his base ones ; in Marvel continuity the Chameleon is, at the time of this writeup, at or close to 7 APs in the key combat skills. 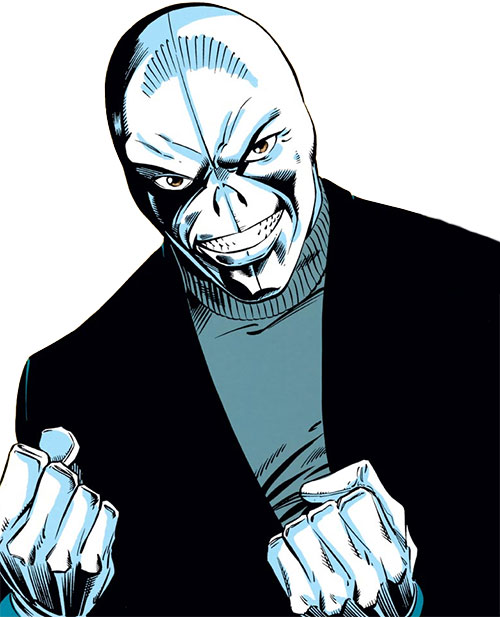 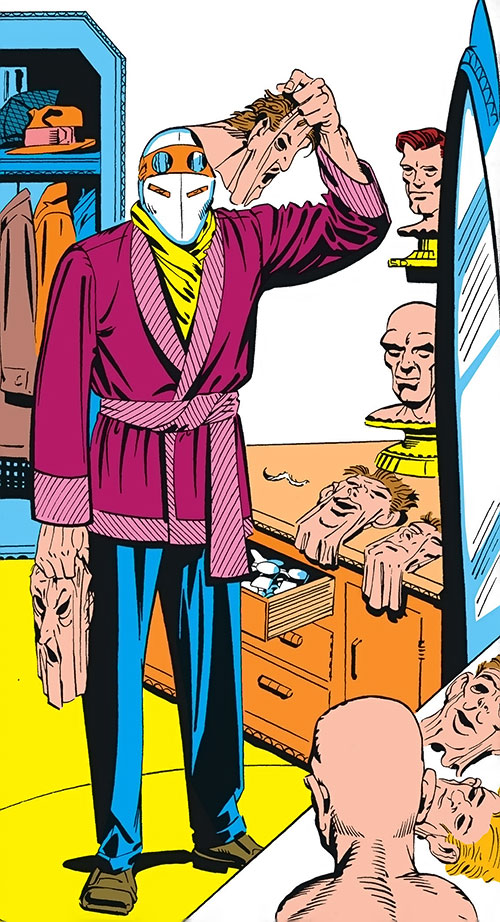 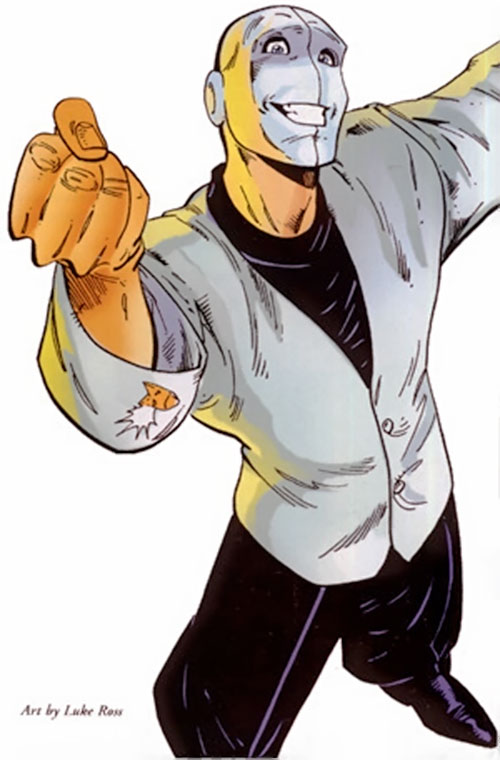