Two little seen members are Control and Chaos who are indeed a fascinating duo. Chaos is pure, beastly power, while Control is like a fan boy living out his ultimate power dream. Let the pummelin’ begin !

Control is a freak whose only power is to assume control over his terrible pet, Chaos. He lets Chaos do all the fighting for him. However, he is surprisingly durable on his own.

Chaos itself is very fast, strong and tough. It has a tail which can be used in combat, but rarely is, while it assists it in making long jumps. Control may be able to mentally locate Chaos.

In 1995, Chaos and Control showed up with the Vicious Circle. The Savage Dragon had been inspecting the ruins of Chicago just after the Pyrrhic victory against the Martian invaders. Chaos and Control ambushed him in one of the houses.

Control and Chaos were a human and monster duo working for the Vicious Circle. They had been ordered to bring the Dragon in. After the Dragon threw a stone knocking Control off the back of Chaos, the Chaos beast charged the Dragon in surprising and unrelenting fury. It quickly defeating him.

Control climbed back up and assumed control over the beast before the Dragon was killed. He delivered him to the Vicious Circle.

The leader of the Vicious Circle had the Dragon crucified. He then tried to assume control over Chicago in the wake of the Martian invasion. But the Dragon broke loose and attacked Cyberface. 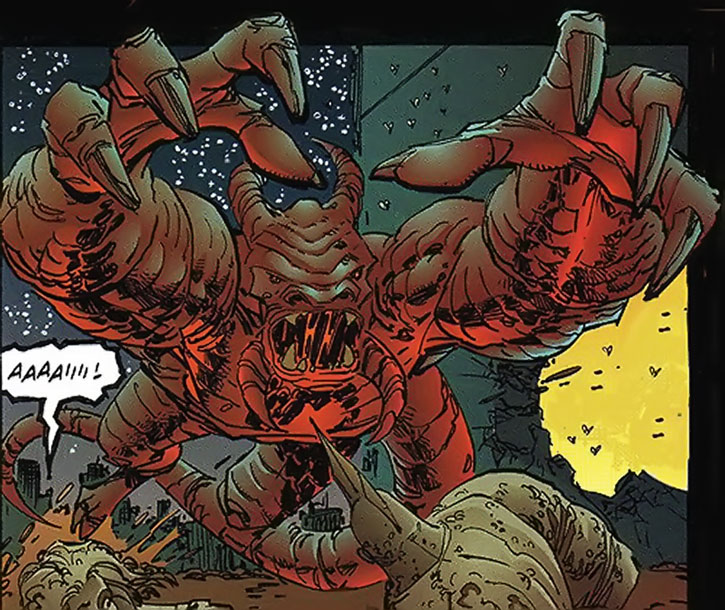 Cyberface, whose life-force was very unstable after his recent resurrection, exploded from but one good punch. The rest of the Circle quickly flew the scene.

Control and Chaos next showed up together with Dung as they ambushed the Dragon in his apartment on order of the Vicious Circle. The Dragon managed to knock out Control by kicking the pair into the air after which Chaos landed on top of Control. Chaos, unleashed, rushed the Dragon, but Dragon took the cannon arm of a semi-conscious Dung and pushed it into the charging beast’s open mouth.

When the cannon arm was activated and opened up a high-pressure stream of excrement, the head of the beast exploded, killing it instantly. Control, if he survived the encounter, was presumably taken into police custody.

Control is a small man in a green jumpsuit with wild hair and empty eye sockets (although he can still see). Control is always sitting on the back of his pet, Chaos with its horns slotted into the eye sockets of Control, riding along like that.

Chaos itself is a terrible, demonic giant of a beast with large muscles, scaly skin, a powerful tail and horns on his head and around it mouth. Its eyes are normally red, except when it’s under the control of Control when they are completely white.

Control talks like a cocky bastard, while Chaos seems incapable of speech.

Control is intent on doing the business of the Vicious Circle. He has a symbiotic relationship to the terrible beast named Chaos. Chaos, offering much power to Control, will never attempt to attack Control and gets benefit from the directions of Control.

Only Control is able to control Chaos. Control will attempt to give verbal commands to Chaos, but only taking the driver’s seat on the back of the beast by slotting the sharp horns of Chaos into his own hollow eye sockets will allow him to actually assume control. Under the influence of Control it will flawlessly follow every order and any direction, essentially making it a Pet of Control.

By itself Chaos is an utterly dangerous, raging beast that will attack anyone in vicinity, and then, in particular, those that it has previously been ordered to destroy. Chaos itself has seemingly no capability for logical reasoning. It may be dangerous to knock out Control and with him all the control and eventual calming of the beast.

Chaos unleashed will attack relentlessly, untiringly and without reason until either the opponent or it is destroyed. In DC Heroes RPG terms it will spend all its HPs on attacks as soon as possible).

“Without Control there is only Chaos. And Chaos is… uncontrollable.”

After an arrest Chaos and Control were sent separately to Belle Reve prison. The newest Suicide Squad tried several methods to recruit Chaos to field missions. The beast was far too far out of control to be used. Eventually Amanda Waller sent down the administrative decision to include Control as well.

The two agreed to the standard Suicide Squad deal. They defected as soon as they got out of sight of their minders. Chaos used his powerful claws to strip the explosive bracelets from both of them. The duel monster was loose in the twin cities.

Against the will of Secretary Waller the control agents on site at Belle Reve alerted local heroes. Waller sent her pinch-man Deadshot after them. Deadshot and the Green Arrow found themselves in competition to nab the monstrous pair.

The two came to a detente barely in time for Deadshot to knock the chaos to his knees with automatic fire. Green Arrow knocked Chaos’ horns from Controls eves with a pair of broadhead arrows.

Both Chaos and Control were returned to Belle Reeve. Whether either or both of them survived is yet to be seen. If they do without question they will hold a grudge against the psychotic sniper and the Emerald Archer.

Bonuses and Limitations:
Control power is only useable with Chaos (-1) and requires that he assumes control of the beast by riding on its back while slotting its horns into his own empty eyesockets (-1).

Bonuses and Limitations:
Growth is Always On (-1) and Already Factored In. 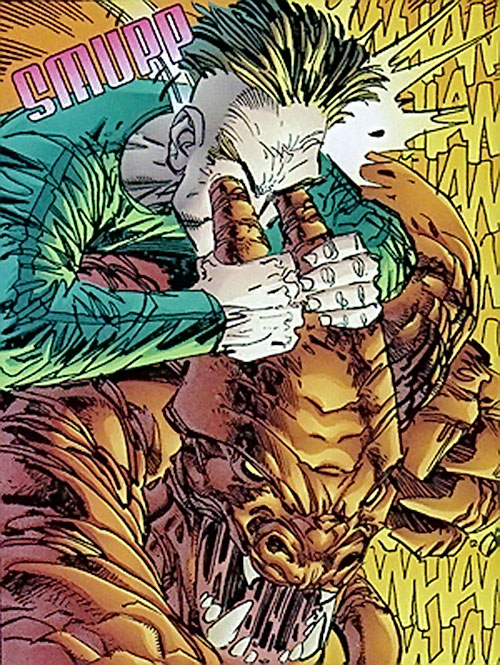 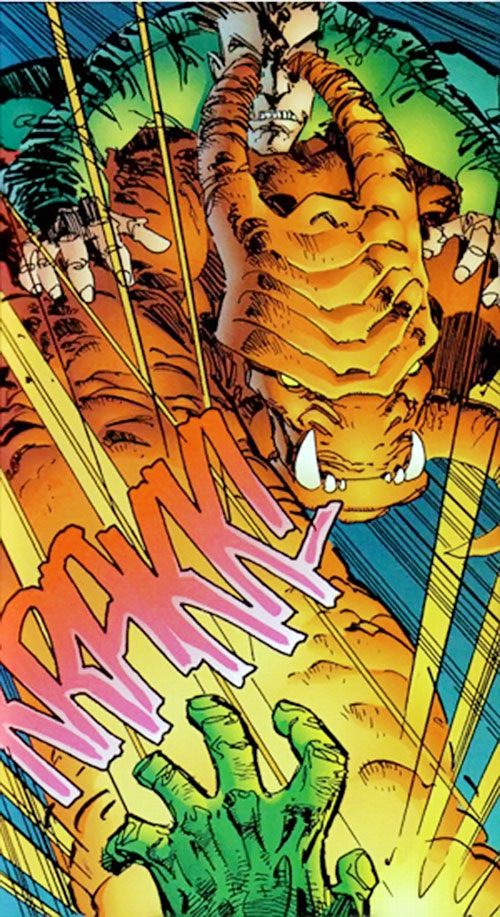 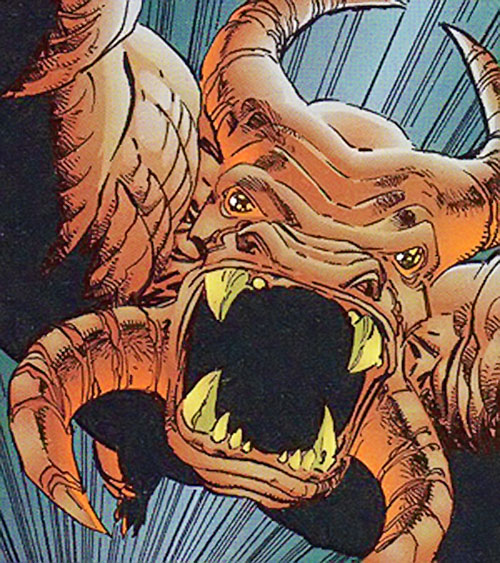