The Chaos Riders were part of the Comics’ Greatest World (now renamed Dark Horse Heroes). Appearing in 1993, the DHH line was Dark Horse Comics’ stab at having their own fully-featured super-hero universe.

I quite liked the Chaos Riders. They appear to be a (cool-looking) street-level threat… except it’s deceptive and they’re considerably worse.

But this also means you have to be careful when using those in a game. Lest overconfident street-level heroes end up in exceedingly hot water.

And though their mix of Terminator and Ghost Rider aesthetics is straightforward, this too might lead to wrong conclusions…

The Chaos Riders are :

They also have a talent for mysteriously disappearing at the end of a scene. Such as driving into a dead end or over an unfinished bridge… and vanishing.

The Riders are not actually living persons. They are the psionicPsionics are sci-fi style psychic powers creations of coma ward patient Toby Klein. When they were destroyed, the psionic feedback that hit Klein took out his life support equipment – and triggered a blackout in Arcadia. 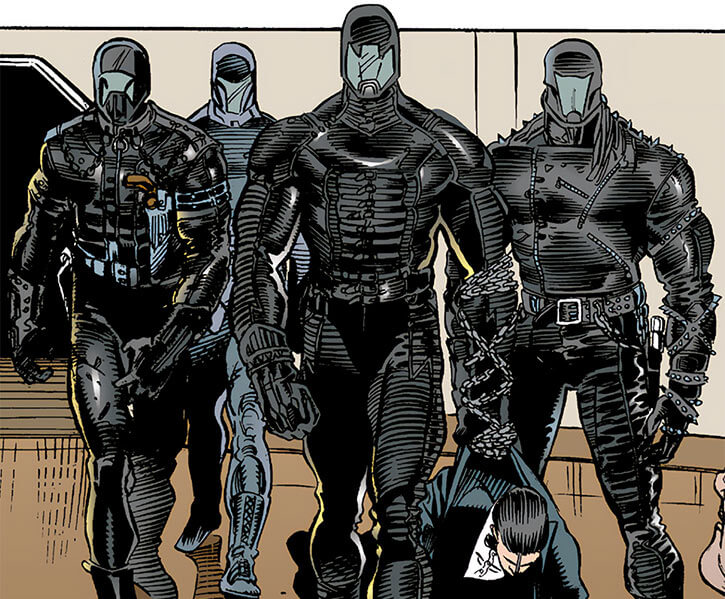 The Chaos Riders are four criminal bikers. They made themselves quite a reputation on the East Coast.

As mercenaries go they are expensive, but highly threatening and efficient. They never failed in their assignments, except for the final one.

This occurred when Arcadia’s top crime lord sent them against the Mayor. The vigilante known as X intervened. But X failed to destroy the Riders, even after detonating a propane tanker truck nearby.

He eventually succeeded after leading them in an area he had saturated with hidden high explosives.

The comatose Toby Klein was electrocuted by the psionic backlash, but survived since he was already in an hospital. He stayed comatose but lost his ability to create psionic manifestations for a few months. 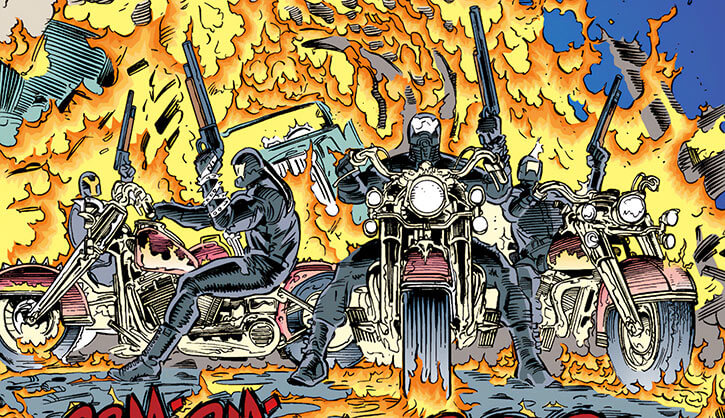 Making friends at the hospital

Later, due to budget cuts, patients had to be lodged two in a room. Toby’s new neighbour was the paralyzed Coffin.

As Coffin was dying, Toby physically manifested as a Chaos Rider. He then created a psionic form for Coffin as his physical body died.

The two set out to avenge themselves against Christy and X. Coffin almost killed X twice during his short existence as a mental construct.

However, X deduced what was going on and killed the comatose Klein. This destroyed Coffin’s psionic form and ended the threat of the Chaos Riders.

The ominous Riders are completely silent and faceless.

Their telepathic talk sounds like a wind without origin, a voice from nowhere like old leaves rustling, a breath just beyond earshot… Even then they “say” few things.

Distinct Appearance, Misc.: If somebody realizes the true nature of the Chaos Rider, the Riders no longer can affect them. The Riders will be like ghosts.

The stats are largely speculative, due to limited material.

It is possible that the firepower might be better abstracted out as Projectile Weapons, and the bikes as Spirit Steeds. It is also possible that they are immune to more elements than fire, such as fire, lightning or toxin. Look, toxin often is an “element” in the video game sense.