For additional context, you can also read the Ben Santini character profiles.

Pinckney is a crack soldier from the world’s most competent military unit.

His speciality is sniping. He’s at the top of his game, with impressive hit ratios under the most trying circumstances. Like most good snipers he’s very calm, patient and capable of working on his own or with a partner for weeks and weeks far behind enemy lines.

Although he professes a distaste for close-in work and is a bit on the short side, he’s actually an excellent hand-to-hand combatant and CQB  tactical operator. He simply is an even better sniper and spotter.

Charles Cotesworth Pinckney’s parents were traditionalists – and quite wealthy and influential. They thus wanted their sons to follow the traditional pattern. First son in the House of Lords with most of the land and wealth, second son in the military, third son in the Church of England. Charles was the second son.

While Pinckney is far from the stereotype, it turned out that he was gifted in matters of arms. He went to all the best schools, and was top of his class at the Sandhurst Royal Military Academy. Not only was he accepted for the Special Air Service, but he breezed through training and joined the best of the best, the 22nd regiment.

At 32, he was a full Colonel. Beyond the then-usual SAS activity in Ireland, he became a veteran of several combat ops around the world.

However, his career was wrecked by a superhuman. Pinckney’s commanding officer was taken over by an hostile telepath. Under mind control, he was about to shoot the Queen when Pinckney blew his head off. Pinckney was demoted to Sergeant for killing his commanding officer, and his advancement permanently frozen.

With his history with superhumans, remarkable skill and general performance as a soldier, Pinckney was selected by Santini and Coleman to become a member of the new StormWatch team for the UN. He was called to action before the team could be formed – as the UN building was under attack by a cadre of terrorists.

Amusingly, it turned out that the Russian Pinckney had picked up in the hotel lobby the night before was another future StormWatch member – Captain Galena Golovin. Thus Santini had his sniper team already formed under a non-regulation variant of the buddy system.

Pinckney and Golovin have continued their relationship in active service. The sniper team has been particularly successful, and has managed to survive all missions. Pinckney normally acts as Golovin’s spotter.

However, Team Achilles had to hit the mattresses when the Authority took over the UN and the US government.

After several years spent in exile on an alternate Earth where the entire human population had been murdered, Team Achilles came back to Wildstorm Earth. Sgt. Pinckney was not among their ranks, though – what happened is unknown.

Like all Team Achilles members, Pinckney has some stereotypical traits from his nationality. He is a polite, cultured, refined, well-educated fellow.

Pinckney can also be described as a smooth talker, but he is discreet and reserved, not putting his social talents to boisterous use. He excels at the occasional cold, deadpan humor, especially with his lover Galena – though their constant bickering is getting a bit on Santini’s nerves.

He also seems to be something of an artist, wielding his sniper rifle like an elegant rapier whereas Golovin wields her huge .50 more like a broadsword. He obviously consider the sniper’s art to be more fitting for a gentleman than beastly close assault detail.

Like all members of his unit, Pinckney is a top-notch professional. He has nerves of steel, a discipline of iron and is fully able to handle catastrophic situations. He’s more cautious and wary than the brash Galena.

“Now, let us say that there are few better ways of destroying a promising career than by blowing a Major-General’s head all over the Queen’s pretty gown.”

Pinckney : “Ankles, knees, hips. Five non-fatal shots delivered while he was falling from the first shot. Have you ever seen any bloody *assistant* shoot like that ?”
Golovin : “It was not badly done, my dutiful assistant.”
Pinckney : “’Not badly done‘ ? Strewth, woman, what’s it take to impress you ?”

Pinckney : “It’s probably gone balls up for the assault team.”
Golovin : “Should we go help ?”
Pinckney : “I’m a sniper, not a pub brawler.”

(As the sniper team seems to be about to die)
Pinckney, totally deadpan : “I suppose this is where I’m supposed to say that I’ve always loved you”
Golovin : “Shut up, Charles.”

Pinckney, bickering with Galena : “And I certainly wouldn’t have jumped if a certain former Soviet slut hadn’t shoved me !”
Golovin, sarcastically : “My poor baby.”

Notes:
StormWatch personnel are placed outside their normal chain of command. While they are on StormWatch duty their Rank Advantage becomes a 0-pts flavour advantage. Rank more or less applies *within* Team Achilles, but this is quite looser than in most military units. 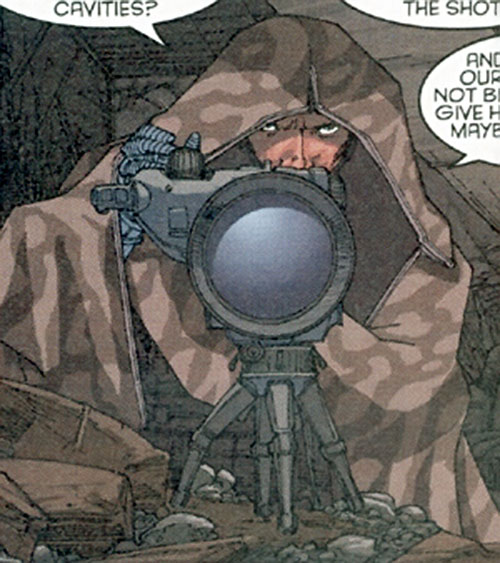 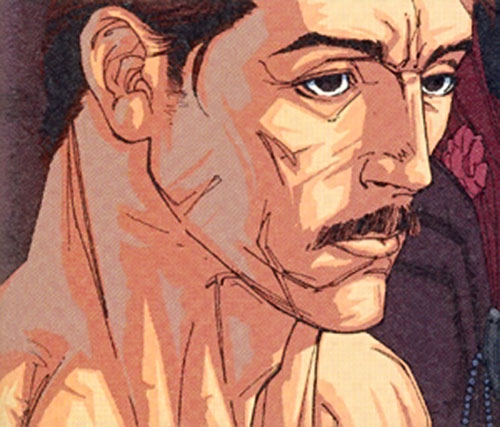