Prior to his resurrection Charlie Arrows possessed limited precognitive abilities. These helped him to survive numerous dangerous situations.

When Mister Pharmacist revived him, he removed the cancer from Charlie’s brain, allowing his full powers to manifest. He has vast powers, being able to:

Serving in the British military during the 1960s, Arrows was posted in the South Pacific. After assaulting an officer, he was set to digging ditches for experiments by the British Rocket Group.

The experiment, on a Kherubim warship, failed and killed a lot of the soldiers. The survivors got cancers, which soon killed all but two of them – Charlie and Paul Frost.

The energies he was exposed to formed a quantum singularity in Charlie’s brain, giving him his powers. But his body, trying to reject the singularity, formed a cancer around it, limiting his powers.

Following his time in the army he became right hand man for the criminal boss Ted Lewis, who controlled crime in the north of England. Arrows used his powers to give him an edge, and developed a dangerous reputation. When his lover Rose, became pregnant, he left her, never even seeing his daughter.

In the ’80s he teamed up with Jon Drake and the sorcerer Jack Carter to break up a Daemonite cell led by Kenyan.

Eventually his cancer was diagnosed, and he travelled to Hobb’s Bay to see Rose. She refused to talk to him, but he did find out that he had a granddaughter. While there he ran into Paul Frost, not knowing that he had also survived the British Rocket Group experiment, whom he knew from school.

While they were talking, a ship containing Daemonites and mercenaries came aground. Paul Frost, who had been waiting for them, knocked Charlie out, leaving him for dead. When he recovered consciousness, Charlie made his way to Rose, and managed to find her alive.

As they tried to escape, she was killed by a Daemonite. The Golden managed to kill the alien before it got Charlie, but Arrows died from the cancer moments later.

That’s another way to beat cancer

He was revived through the efforts of Mister Pharmacist and Christopher Truelove, so that the Establishment could question him. The revival removed his cancer, allowing him access to his full powers.

The Establishment went after Frost and the Daemonites. They were flying the Kherubim warship they had stolen, the same one that the British Rocket Group had experimented on, towards London. This left Arrows in the care of George Bulman.

Arrows, wanting revenge on Frost, knocked Bulman out. But before he could travel through one of the Establishment’s Windows, Christopher Truelove’s ghost emerged from Bulman to confront him. Charlie used his new powers to recreate Truelove’s body, and then knocked him out too.

He then travelled to the warship and confronted Frost. Arrows learned that Frost was now a sentient cancer colony. He intended to explode the warship over London, spreading his sentient cancers over Europe. Arrows sent him to dead space, and then changed the warship into a swarm of roses, which rained on London.

He then set out to search for his granddaughter, Lucy. She found him, revealing that she had inherited superpowers from him. She also told him that she now worked for Dr. Orwell, and Charlie cautiously agreed to also work for Orwell.

The elder Arrows eventually learned that Orwell was a stranded time traveller. Orwell planned to travel to the end of time to replace Spartan. The Spartan robot was destined to be the one being to survive the end of this universe, and thereby become God in the next universe.

Orwell and his mercenaries hijacked an alien god’s corpse from the Bleed, which he could use to travel through time. He revealed that he had recruited Charlie because his powers would allow Orwell to reprogram Spartan.

Orwell had placed post-hypnotic suggestions in Charlie’s mind. It gave him complete control over Arrows, who had to obey Orwell’s spoken commands.

Arrows to the nil

Charlie and Lucy decided to turn against Orwell, and they blocked up Charlie’s ears, allowing him to attack Orwell.

As they battled, a swarm of Venusians that Orwell had acquired for his plan, escaped and began to overrun the ship. They supplanted Orwell’s role in his own master plan. The Arrows helped the Establishment battle the overwhelming Venusians, as the universe ended.

When it appeared that the Venusians had won, Charlie used his powers to connect to Spartan/Metavac, assuring the new universe’s safe existence. Presumably both Charlie and Lucy died in the end of the universe.

Charlie is an aged thug, who has survived a long time in a harsh lifestyle. He is fairly canny and cautious, and rarely gives away his feelings. He maintains a hard, cold exterior, and frequently tries to intimidate his way out of situations if possible. Especially if he can use his reputation.

His primary interest has always been looking out for himself, and he has been willing to use violence, and lethal force. But he’s beginning to get more selfless, and will save others if it won’t cost him.

After discovering he was dying, he decided to make up for the mistakes he made in his life. The only thing he really cares about now is protecting his granddaughter, Lucy.

“Listen, son, I appreciate what you did, bringing me back from the dead an’ all, but at the end of the day I’m a villain. Of course I’ll bite the hand that feeds me. So, will you tell me, or do I start breaking your thumbs ?”

“I’ve tried playin’ the nice guy an’ where’s it got me ? Some toffee-nosed twonk I wouldn’t think twice about knee-cappin’ has been spoon feedin’ me crap an’ telling me it was sugar. It’s time for some old-style retribution, my girl. Time to hand Orwell his gonads !”

Prior to his resurrection his only power was Precognition. He also had firearms stashed in the trunk of his car : 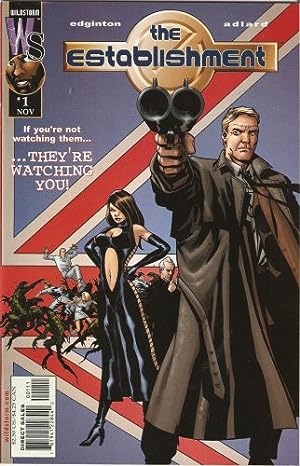