Charm’s power is an instinctive rapport with others that makes it easy for him to say and do the exact right things to persuade them to do what he wants.

He is a phenomenal portrait artist, always capturing the inner nature of his subject with astounding skill.

He is also formidable with a blade and can be deadly versus an opponent intent on killing him.

Charm is an emotional vampire — he would slowly die without human contact.

Born in Northern Ireland, he was caught between the warring factions there. After he was labelled (correctly) a “grass”, he was forced to flee to London.

There, he became a briefly successful stage actor before being convinced to take part in a plot to kill King Charles.

FREE saved him and he has worked for them since.

A fastidious fashion plate with movie star good looks, dressed in whatever his current milieu considers the height of fashion.

Drake is a social chameleon, vain, weak willed, easily distracted. He is always playing a role and usually lost in the part. Although one of the most useful FREElancers, he must be watched at all times and kept on track with reminders of which side he is on.

He is a perfect example of why most espionage agencies in his world consider recruiting metable operatives to be more trouble than they are worth.

“This is just a small misunderstanding…”

Could have been associated with any group from the JLA to Kobra.

Charm, aka Simon Drake aka Paul Drummon aka Daniel Dracoli and others 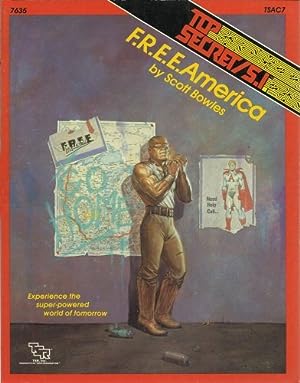