Andy is a trained, determined, and experienced police officer with skills in driving, pistol training, and police procedures.

Daryl his partner leans on him for his detective skills. Daryl feeds Andy the details of a murder case and Andy does the rest. Daryl may challenge Andy’s deductive reasoning but rarely goes against his decisions.

He is also the main police contact for the Charmed Ones. After learning of the sisters’ supernatural background, he used his credentials to assist them any way he could.

Andy Trudeau grew up next-door to the Halliwell sisters in San Francisco. As a child he was close to them all. As a result, Grams had to frequently wipe his mind of any intentional or unintentional magic he might have witnessed in the Halliwell household.

In high school he dated Prue for a short period, and their favorite meeting spot was their special bench swing. After high school, they parted ways and he moved out of his childhood home to Washington, and later Portland, but he still checks up on Prue.

Andy married, and later divorced, sometime between his college years and before he returned to San Francisco. He remained on good terms with his ex-wife, Susan, who didn’t drop his last name even after the divorce.

Andy worked as an Inspector, the third generation in his family to do so, for the San Francisco Police Department. He was coincidentally assigned to almost every police case that involved the Charmed sisters. He worked with Darryl Morris as his partner, although he caused him quite a bit of “grief” by almost always being seemingly ahead of his partner.

When the Halliwell sisters reunite and move back into the Manor after their Grams’ death, Prue bumps into Andy at Bay General hospital. The two of them began dating shortly thereafter. 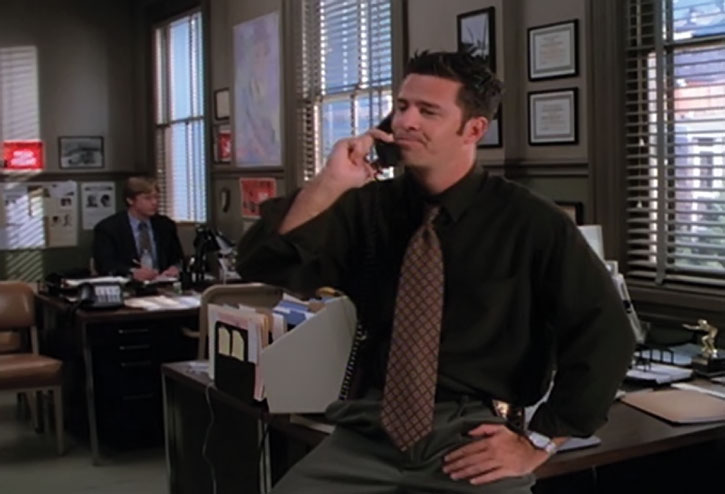 He is in love with Prue. But while the affection was obviously returned, they eventually break up because Prue can’t tell Andy her secret. Furthermore, his answer under the influence of her truth spell wasn’t the one she wished for.

Eventually, Andy discovers that all three sisters are witches, and that they are responsible for saving many people’s lives. He finally learns to accept their powers, just as they did before him. He also realized they only use their powers to save innocent people. That was why he became a cop.

Yet, despite the wedge of magic between him and Prue (he can choose to not be included in the world of magic, but she cannot), their feelings only continued to grow. Eventually Andy could hear Prue’s cry of warning while she was Spirit Traveling. He could communicate with her for the precious few moments before his spirit disappeared after being killed, almost as if they were soul-mates.

Shortly after Andy finds out their secret, the sisters come up against a demon named Rodriguez. Rodriquez happens to be one of the Internal Affairs officers at SFPD investigating Andy’s “unsolved freaky cases”.

Rodriguez “eavesdrops” on a conversation between Andy and Daryl about the identity of whom Andy protects. This topped with Andy’s unsolved cases, allows Rodriquez to determine the Halliwell sisters were the Charmed Ones.

Rodriquez kills his own partner and attempts to frame Andy for the murder. ”You know who” then sends Tempus to help Rodriquez destroy the sisters.

Every time Rodriquez is vanquished by the Charmed Ones Tempus causes the day to restart, with only Rodriguez and Tempus having knowledge of time being reset. So, eventually Rodriguez will learn from his past mistakes and manage to kill all three sisters.

However, unknown to them, Phoebe is able to retain some memories of the previous repeated days due to her ability to see events in the past.

Rodriguez becomes increasingly riled by the pain his repeated death causes, he loses his temper. During the third time loop, Rodriquez glared at Kit outside the manor with his red demon eyes, which was unfortunately witnessed by an instantly alarmed Andy. 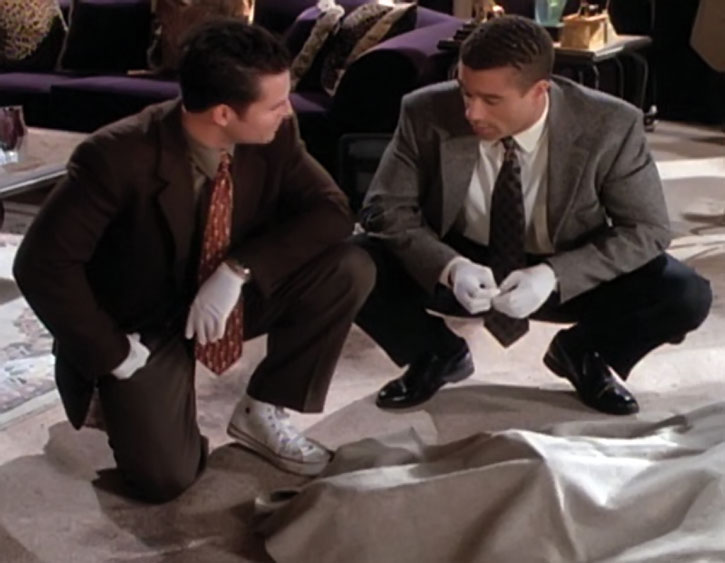 Andy was hiding-out inside his car, watching over the Manor. He rushes to the Manor to protect the sisters, but not before Rodriguez fires an energy ball aimed at Prue, who is tackled out of the way by Piper and barely avoided by Phoebe. The sisters barely have time to process the attack when Andy bursts into the house with a gun and attempts to kill Rodriguez.

Andy gets off at least two shots, however, Rodriguez is unfazed. He hits Andy with an energy ball that sends him flying across the living room and into a glass display case, killing him.

While Prue is unconscious, Andy’s spirit comes to her. Andy tells her that he broke his promise to not come to the manor and that Phoebe’s premonition wasn’t one she could stop because it wasn’t meant to be stopped. Prue realizes what he’s saying, but Andy tells her that it’s okay.

He says that he knows now this was destiny and that hers is to continue on. Andy reminds her of how she taught him that everything happens for a reason. Prue objects that it isn’t fair, but Andy tells her she needs to go back and stop the time loop.

Otherwise, Rodriguez will succeed in killing her and her sisters and that will mean he died for nothing. Prue and Andy share a final kiss. He tells Prue that he’ll always be there for her then vanishes.

Moments later, Prue regains consciousness. She casts a spell to speed up time which breaks the time loop, thus defeating Tempus, then reflects Rodriguez’s energy ball, killing him. The three sisters later attend Andy’s funeral with Darryl, and Andy’s name was cleared of the crime Rodriguez tried to frame him for.

In the 21 episodes Andy appears in, his style does not change much. He keeps with the same dark brown hair, cut short, and sometimes combed to the side or spiky. When it is longer it is combed back. He has a medium build.

Throughout the series, Andy is often dapperly dressed while on the job, wearing a suit, dress shirt and tie in the office; if he is out in the field he often wears a tan/grey colored trench coat.

Often times, the dress shirt is of a solid color, sometimes striped with a solid color tie with designs on it. Off the job, Andy dresses in a casual but masculine way, wearing solid color sweaters, dress shirts or tees, jeans and suede or leather jackets.

In “From Fear to Eternity” Andy wears his good luck sneakers. Detective Morris calls them his Serial shoes.

Andy is a good dedicated policeman. He is good under pressure and is able to evade interrogation questioning for a time. He will hold to his convictions and will stand up for what is right.

Andy’s favorite movie growing up was Evil Dead 2. Andy seems to prefer blue in his choice of color, otherwise he likes earthy colors.

The relationship Andy has with Prue is a common theme in the series. The two dated in high school, then when meeting again almost seven years later, tried to renew the flame. Things became difficult almost immediately when Prue gained her powers and the two had a sexual encounter on their first date.

Prue wanted things to progress slower as she struggled too with the knowledge of her new life as a witch. As their relationship seemed to be going better, Prue finds Andy having dinner with his ex-wife.

The two continue to have an on again, off again relationship. Though they love each other, Prue’s reality of secretly being a witch, Andy’s inability to accept it, and the constant introduction of other suitors in the sister’s lives causes their relationship to never truly materialize. It is a constant aggravation for Andy throughout the series.

Inspector Andy Trudeau (about his title) : “What can I say in any other city I’d be called detective.”
Prue: “Inspector’s classier.”

Prue Halliwell: “He’s a reporter, trying to make a name for himself. You can’t believe anything he says.”
Inspector Andy Trudeau: “Normally, I don’t. This time, I do. We’ve been down this road too many times, Prue. I know you’re hiding something. I have my suspicions about what it is, but I’ve had to accept the fact that you can’t tell me or you don’t want to tell me. Either way, it’s not just me anymore. Lohman’s onto you, or at least he thinks he is. And he’s not gonna let go. Prue, if you don’t level with me, I can’t help you control this.”
Prue Halliwell: “Andy, I’m just never sure if it’s better for you to know or not to know.”

“One day. I’m going to figure out your secret Prue. Count on it.”

“Excuse me. Ladies, do you mind if we ask a few questions ?”

Ashley Fallon: “You believe them that it’s not human ?”
Inspector Andy Trudeau: “Let’s just say recent experiences have taught me to keep an open mind.”

Inspector Andy Trudeau: “Whew ! I’ve always believed there was another world, behind or beyond this one. I even sort of believe in demons. But I have never in my wildest dreams, I could never have imagined that this existed.”
Prue Halliwell: “Yeah, neither did we. But we’ve come to believe that there’s a reason for why that world was opened up to us. Which means there’s probably a very good reason why it was opened up to you, too.”
Phoebe Halliwell: “Welcome, to our little shop of horrors.”

Inspector Rodriguez: “Bottom line. I know my partner was killed by a supernatural being. And I think Prue Halliwell can help me figure out who did it.”
Inspector Andy Trudeau: “Really ? Well, I’ll just get the commissioner to signal Batman, and then I’ll get right on it.”
Inspector Rodriguez: “You think I’m joking? I know everything, Trudeau. Everything including the fact that Prue Halliwell is a witch. Now you’re gonna arrange a meeting with her tonight, you understand ? Or else I’m gonna bust your ass and expose hers.”

“Listen, Prue, I’ve done some thinking about the Truth Spell, and I’m still kind of trying to sort my feelings out, but I’ve kind of come to the conclusion that no matter whether I had a minute, a month, or a year to think about it wouldn’t change the truth. It may sound boring, but I know that someday I want to have a normal life to come home to. You know, with a white picket fence and a two-car garage, a screaming kid. But no demons. Maybe it’s because of all the evil I deal with every day on the job. I don’t know.”

“Everything happens for a reason, remember, you taught me that. Take care Prue.”

In the Charmed universe, Andy could return as a whitelighter.

A 324 points Character (without equipment) 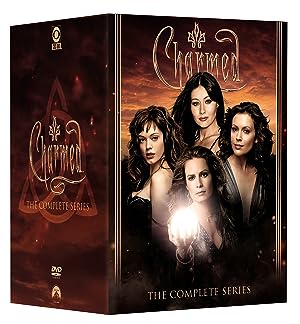 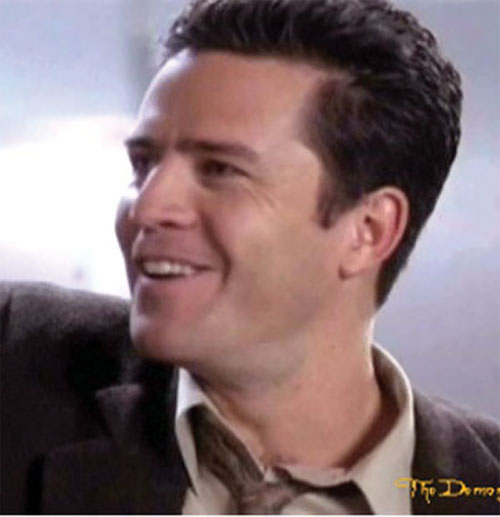 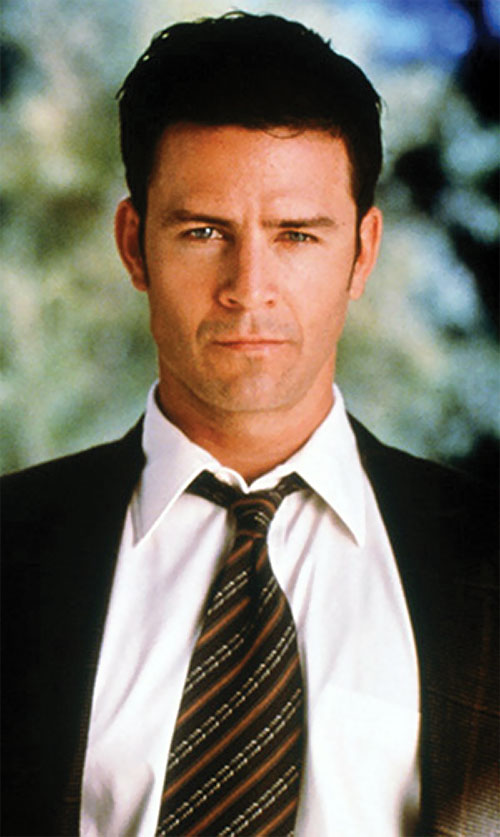 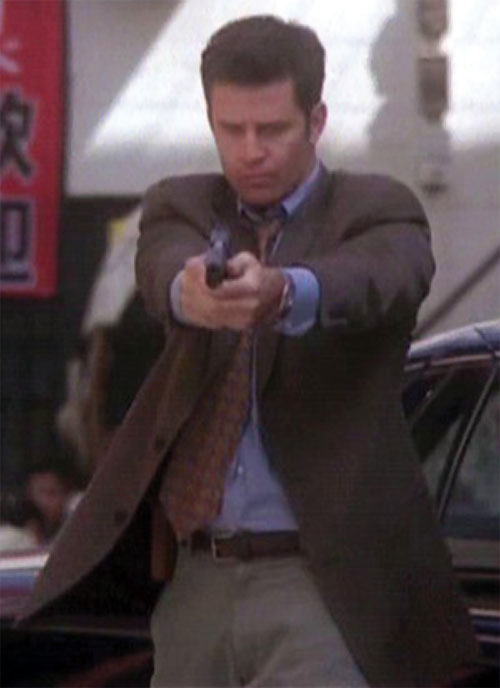 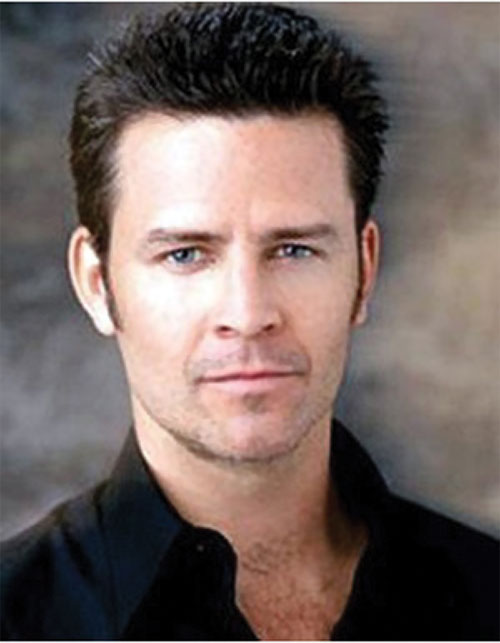 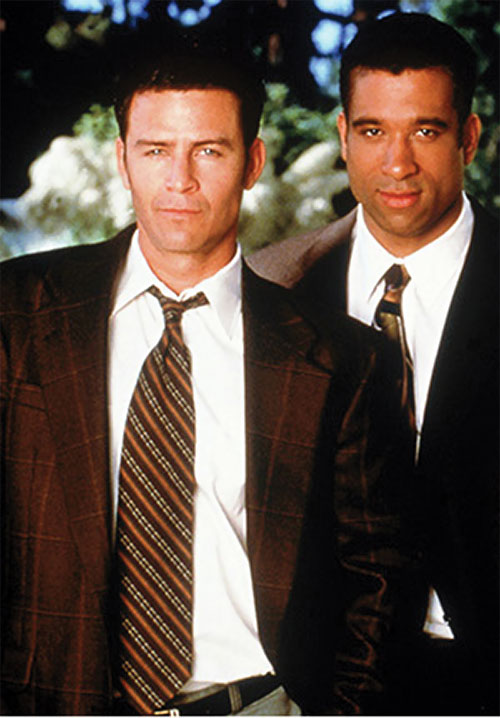 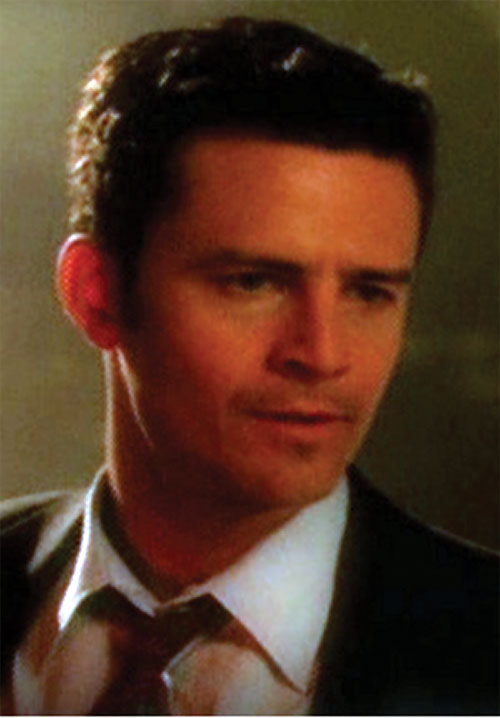 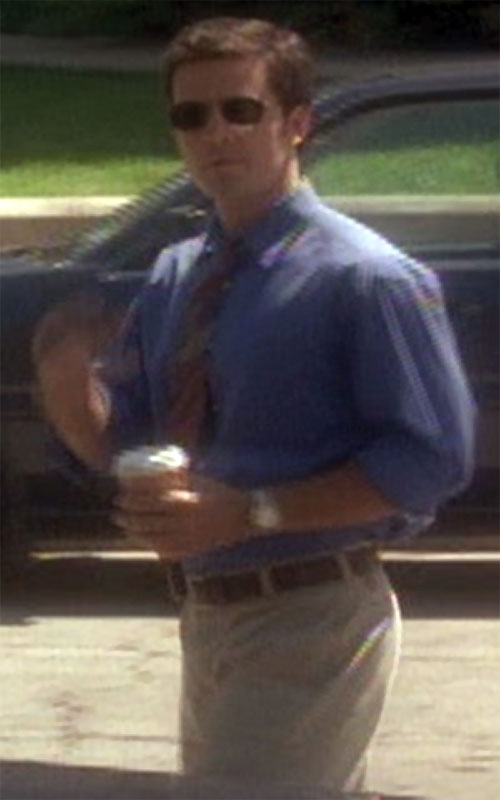 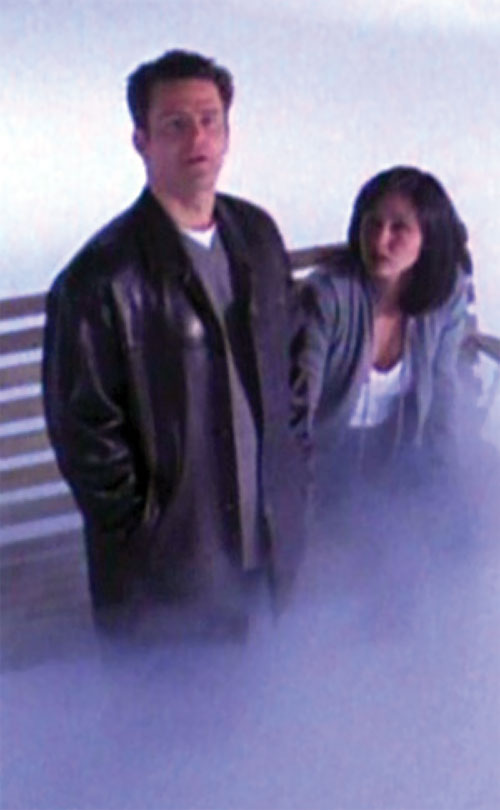 As a little boy : 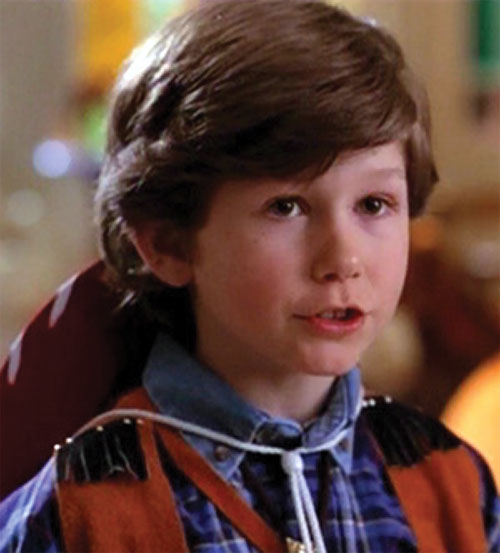