Charmed Trivia: In The Fourth Sister The Halliwells’ address is 7571 Prescott street with the Phone #555-0198. However, in the episode Is there a Woogie in the house? Phoebe gives her address as 1329 Prescott street. The real-world house is at 1329 Carroll Avenue, Los Angeles, CA. You can find it on Google Maps with this address.

The evil sorceress Kali answered a desperate summons from a troubled teenage witch named Aviva. Kali gave the naïve Aviva power over flame but only if she would act as her willing pawn.

With her new power Aviva could cause objects to burst into flame merely by looking at them. She wields heat like the sun and may cause plants to grow instantly. Aviva causes a ball of flame to form in her palm which she throws towards targets.

Aviva is a true witch and could develop more abilities later in life. As of now, she’s a novice with very limited knowledge of the occult. She only knows what she could learn on her own.

How do you know she is a witch?

I have written this profile under the assumption that Aviva is a true witch. But there is another credible camp of thought suggesting that she is not. This section will allow GMs to make up their own minds.

Some think Aviva is a witch because:

Halliwell magic is old and powerful and desired by many. Kali, a sorceress, enticed a young innocent witch with the promise of power and acceptance to help in her plans to possess it. 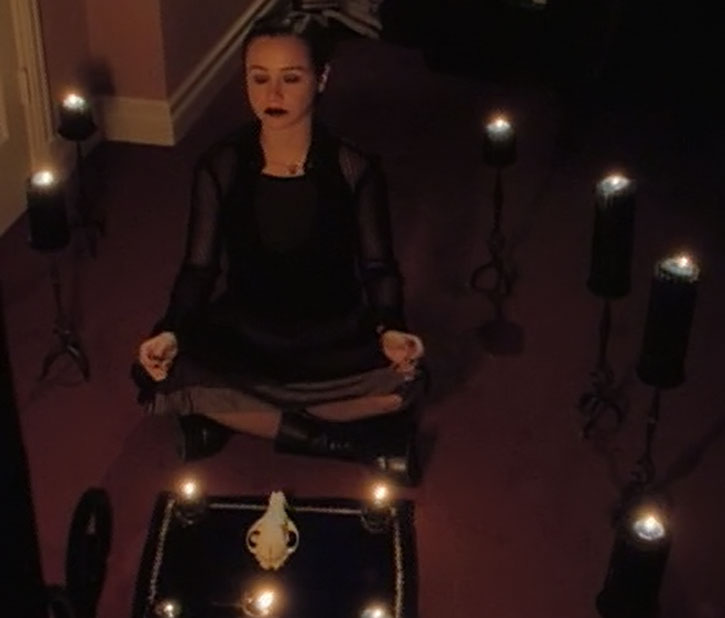 Aviva tried a summoning spell and was overjoyed to find she had summoned a demon named Kali. Kali appeared as a vision in a mirror, a beautiful woman dressed in white who spoke softly with only kind reassuring words.

It’s not certain whether Kali relied on Aviva’s magical abilities to perform the summons each time. She may already have had a gateway to Earth.

Kali promised Aviva that her mother, who was in rehab, would be proud of her. She then ordered Aviva to spy on the Charmed ones, Prue, Piper, and Phoebe Halliwell. Kali supplied Aviva with a power of her own so she could better infiltrate the Charmed Ones and eventually join their coven.

Aviva lived temporarily with her Aunt Jackie. The Halliwell sister’s cat, Kit, had gone missing. Kali devised a way for Aviva to infiltrate the Halliwells. Aviva would simply return their cat.

After she returned the cat; Aviva revealed that she was a witch. She proved unaffected by Piper’s freeze power and demonstrated her own pyrokinetic  abilities. Her plan failed however. The Halliwell sisters were just too busy and cautious to instantly trust someone they just met. Prue ordered Aviva away.

Sisters of her own

Kali directed Aviva to connect with Phoebe and to steer clear of Prue, the strongest Halliwell sister. A second attempt was made at Kali’s directing. Aviva phoned Phoebe who met her at school.

Aviva skipped class and went with Phoebe back to the Halliwell Manor. Kali shared Aviva’s fire power with Phoebe to help gain her confidence, Prue interrupted them.

Again, Aviva returned to Kali defeated. When her aunt burst into the room, Aviva was furious. Kali took the opportunity to cause fire to leap from a candle onto Jackie’s sweater. Jackie beat at the flames but ultimately fell down the stairs and ended up in the hospital. 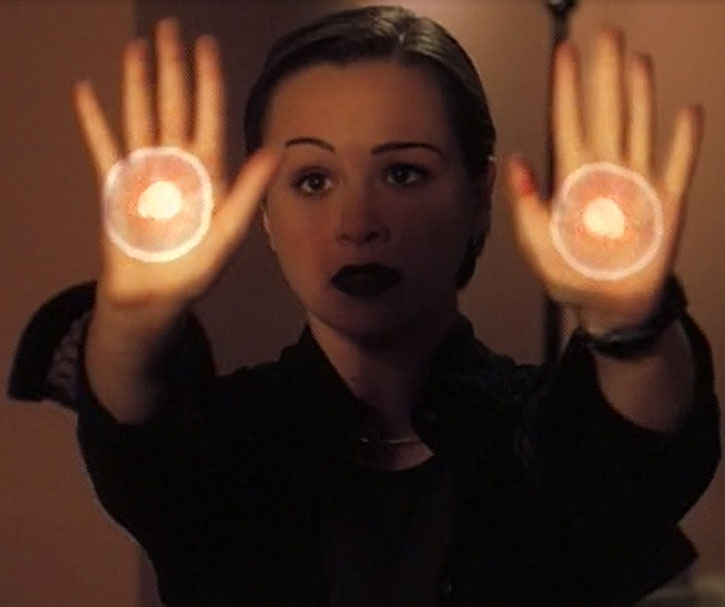 Kali decided to change tactics. As Prue was their main obstacle, Kali ordered Aviva to replace Prue in the power of three and gain a family of her own. Aviva set a simple trap. She would wait in her room and surprise Prue with a fireball when she entered.

This plan was foiled by Phoebe when she foresaw the attack. She opened the door to Prue’s bedroom. Aviva attacked and was shocked to see Phoebe instead of Prue. Aviva fled the house afterwards.

Aviva was unwilling to continue with Kali because people were getting hurt. Kali then possessed Aviva’s body and straight away returned to the Halliwell’s to confront them herself. However, the Halliwell sisters were prepared and had already consulted the Book of Shadows.

Piper froze Kali but Aviva, being a witch was unaffected. Aviva fell to the floor, separating the two. Prue moved Kali to a mirror where she was absorbed back into her own dimension. Phoebe smashed her reflection preventing her from returning or influencing the earthly realm again.

Aviva was free of Kali’s hold over her but no longer had her fire powers. Afterwards, Aviva gave up her goth look and was happily reunited with her mother and aunt.

Aviva is a teenage girl with dark eyes and fair skin and small for her age. Aviva wears the typical goth fashion of the late 1990s. Basic black lipstick, leather, and boots with extra thick soles. Aviva also wears a wrist-watch on her left wrist.

Aviva has a strong desire for family and sisters of her own. After her mother went away to rehab she felt totally alone and became antagonistic towards the only family member she had left, her Aunt Jackie.

She was an easy to manipulate teen who was seeking her place in the world. She sought attention through acting out, living the goth lifestyle, and turning to “black magic”.

Acting the typical teenager, she isn’t satisfied. Hates her Aunt, who Aviva is certain is trying to control her life, and tells her diary that life in general sucks. Aviva isn’t a bad kid but definitely lonely.

When Aviva “summoned” Kali she was extremely happy. However, she came to worry about Kali’s motives. She wanted very badly for all that Kali told her to be true. She hated lying to the Halliwells.

Kit, the Halliwell’s cat, pretty much clawed everyone it came in contact with. The sole exceptions were good witches and Andy. Aviva holding and petting Kit with no problem is just another testimony that Aviva is good at heart.

Her favorite color is black.

Aviva is a real-life teenage witch. Even if her specific power never develops she still retains the ability to cast rituals. She could be trained in the mystic arts by the likes of Madame Xanadu later joining a teen team.

“Come to me Kali, I conjure thee Kali.”

(Explaining how she found Kit, the Halliwell’s missing cat) “I was just walking by and uh, I saw one of your flyers and poof there she was like magic. Heh.”

Piper: “Uh, guys, we have about 20 seconds until they unfreeze.”
Phoebe: “How did you find out about us ?”
Aviva: “I’m gonna need more than 20 seconds for that.”

Aviva: “You didn’t tell your bitch sister about this did you ?”
Phoebe: “Hey, watch your mouth. Prue had every right to be upset with what you did.”
Aviva: “It’s funny how you knew I was talking about Prue and not Piper.”

“This is so totally cool.”

“I like mirrors, they never lie to you. They always tell the truth whether you like it or not.”

Prue: “We just met your niece, we lost our cat and she found it for us.”
Aunt Jackie: “Oh, that’s what she was hiding.”
Prue: “Hiding ?”
Aunt Jackie: “In the closet, she wouldn’t let me go anywhere near it. You’re lucky she didn’t sacrifice the poor thing.”
Prue: “I’m sorry ?”
Aunt Jackie: “She’s a strange kid, very troubled, into all sorts of weird stuff. Black magic. Voodoo. God knows what else. No wonder she doesn’t have any friends.”
Prue: “What makes you think she’s into black magic ?”
Aunt Jackie: “You should see her room. Seems like every time I walk past she’s in there… chanting or something. Sometimes, I swear, I even hear other voices. I know she’s not happy there. I’m only taking care of her until her mom gets out of rehab.”

(Excerpt from the Book of Shadows about Kali) “A spirit sorceress cursed into her own dimension, she appears in reflections and has the power to possess innocents, and uses them as pawns to usurp a witch’s power and turn them to evil. To get rid of her, shatter her reflection.”

A 158 points Character (without rituals)

Connections:
Phoebe Halliwell (Low, by the end of the episode).

It is unlikely that Aviva actually summoned Kali especially when considering what the Book of Shadows says about Kali. She lives in her own dimension and appears in reflections. However, if a GM believes Aviva needs the ritual to summon Kali.

Here is what I envision her having:

Rituals:
Summon Demon
Effect: Dimension Travel: 10
Bonuses & Limitations: Dimension Travel is Summon only (-1), Travel is only from Hell to Earth (BC 100).
Casting time: 04 (Caster can decrease the cost of casting this ritual by extending the amount of time they chant, it can be as long as the caster can withstand it. I used the “Casting Time Table” from pg. 191.
Components: Nothing (+2).
Special Restrictions: lit candles must surround the caster in a circle, a standing mirror, an animal skull, and the chant of “Come to me (Demon’s name), I conjure thee” for as long as it takes (usually not long). (-10 HP) All items must be present for the ritual to work.
Comments: In the Charmed-verse, coming to Earth wasn’t always a problem for demons but staying there usually meant killing others. I’m assuming that even if Aviva did successfully cast this Ritual it would have only been the one time. Kali made the trip to the mirror herself after that.
Cost: 51
Adjusted Cost: 15 min. -1 AP Cost: 47, 4 hours – -2 APs Cost: 43, 2 days – -3APs Cost: 39, 1 month – 4 APs Cost: 35, 1 year – 5 APs Cost: 31.

A second option would be:
Summon Kali
Effect: Dimension Travel: 02
Bonuses & Limitations: Dimension Travel is Summon only (-1), Travel is only from Kali’s own dimension just beyond the mirror (BC 100).
Casting Time: 01 (unless Kali doesn’t want to be summoned (+1 OV/RV) but then the OV/RV increases again as Kali has an Int/Mind in the 3-4 Range. Total OV/RV of 05/05 and Aviva would have to score at least 03 RAPs for success.)
Components: Nothing (+2).
Special Restrictions: Lit candles must surround the caster in a circle, a standing mirror, an animal skull, and the chant of “Come to me Kali, I conjure thee” for as long as it takes. (usually not long). (-10 HP) All items must be present for the ritual to work.
Cost: 50.

This is Aviva with her Kali granted fire powers. There was a point in the episode when Kali possessed Aviva’s body. Her powers did not seem any more or less powerful at that time. 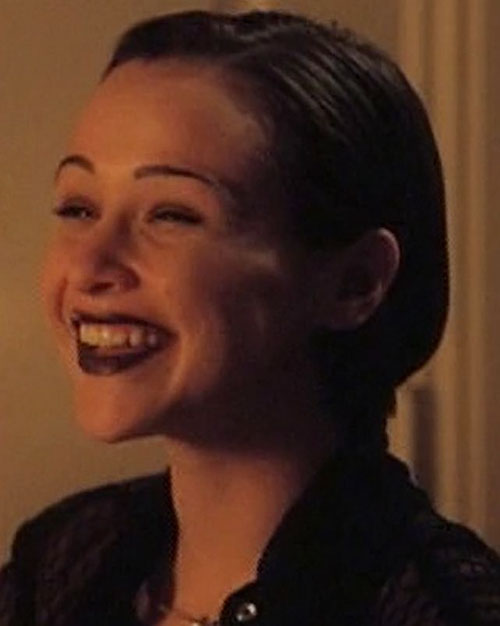 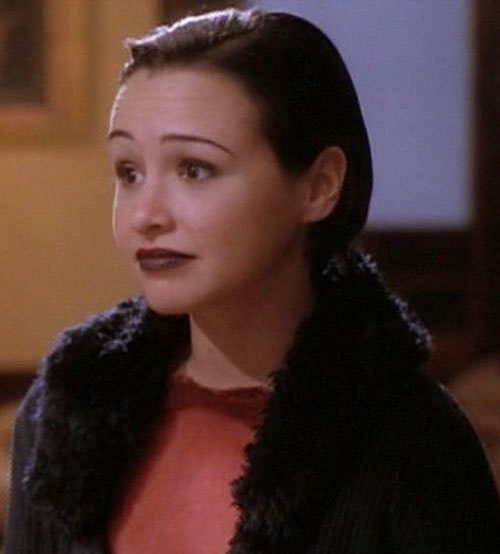 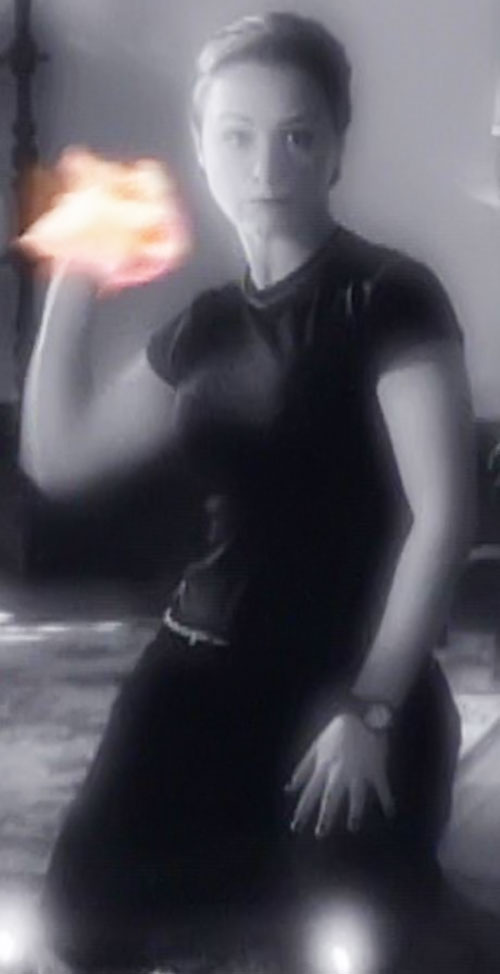