Chas is an experienced taxi cab driver. He’s knowledgeable about all the routes in the metropolitan London area. Chas often works as John’s driver or bodyguard. While not particularly bright, Chas is in excellent physical shape and no stranger whatsoever to violence. He can give even a demon a match (he often spends Hero Points  on physical fights and can easily beat up John Constantine too which has happened many times).

He has picked up a trick or two about the occult over the years from John, and can handle himself in such situations or when faced with threats from minor criminals.

Chas is a rough, strong physical fellow of non-descript appearance. He has a broken nose, black, short-cut hair and brown eyes. His features show that he is no stranger to bad times and hard experiences. Chas is the best friend of John Constantine, yet somehow he is still alive. He has the same type of dry sense of humor as John, and they are both equally cynical.

They match greatly as friends. The pair goes back to much younger days when Chas was the roadie of John’s band, Mucous Membrane. While really named Frank William Chandler, his nickname “Chas” is actually after Chas Chandler, the producer  of Jimi Hendrix’s first two albums.

The two often meet at the pub for a few beers and just relaxing. Their friendship has had many turns, but they always eventually over time become the best mates again.

Chas knows that he can always count on John to be there when he or his family really needs him to help out with either occult or criminal problems. Despite Chas’ wife hating John, Chas himself will also always be there to provide various small services in his turn. Or just for the sake of pure friendship, because they will get down to the pub when everything is done.

All in all, Chas actually believes in trying to do the right thing for those that treat him right. Being one of the only constant factors in John’s life, his storage house also serves to store John’s occult stuff.

Chas is married to Renee, an imposing woman who seems to spend the bulk of her time reprimanding her poor beleaguered husband. Her ire is usually caused by some problem whose roots can be traced back to Constantine. They have an adult daughter Geraldine who in turn has a daughter of her own, Trish.

Chas has quite a temper. This likely comes from the many problems and frustrations of his life, including a marriage which goes up and down all the time. As such, he is quick to take on physical violence. Chas in a rage is a fearsome sight.

He is also a vengeful sort, so people should avoid getting on his bad side. For example, it’s a very bad idea for high society folks to look down or him, be snotty or treat him badly, because he will beat them up too.

He is comfortable with the seedier elements of the city. Chas is known to sometimes have done deals with them, such as loaning money or even hiring them to do a job or two to deal with another problem that has surfaced in his life.

Being unlucky, he is often in great debt, has problems with the law or with any of Constantine’s many foes, or has to do something to help out his extended family. Naturally, he gets along greatly with the working middle class of people.

“You think you’re bleeding Bruce Lee ? Stay down ! Stay down !” (kicks down opponent to protect John)

Chas is part of the Hellblazer mythos, which places him in the Vertigo line (universe) of DC books. 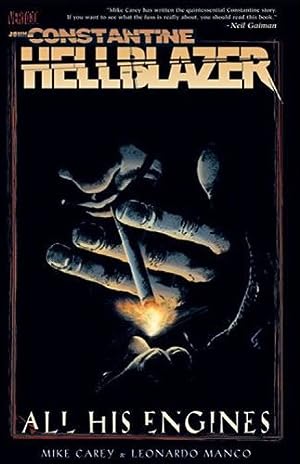 John Constantine, Hellblazer: All His Engines