El Gato is superhumanly strong, fast, agile and durable. He’s powerful, and his sheer speed and his extremely sharp claw make him a right menace. He could actually engage Captain Marvel in combat without being overpowered and with getting in a few nasty slashes.

If he can obtain such solid results against the greatest fighter among the Kree, lesser opponents may want to tread carefully around him.

Secondary sources list him as being able to lift 8 tons and run at 75mph, which seems on-target.

He may have Area Knowledge (Mexico City) and Dependent (his mama), but this is very tentative.

Estebban Carracus was a lazy ne‘er-do-well and, apparently, thief. He was also an ardent follower of famous bandit Raoul Escheverra, known for his recurrent clashes with the police.

Carracus and Escheverra shared many opinions. These included a strong distrust of the police and moneyed classes, a vague belief in the virtues of socialism, and a tendency toward accusing Americans of all the ills befalling to Mexico.

(Yes people – lazy Mexicans ! Mexican banditos with sombrero and drooping moustaches ! Lazy socialists ! Socialists who only steal to enrich themselves and hate America ! A violent lowlife named Escheverra ! Are we amazed yet ?)

While Escheverra was engaged in a running firefight with the police, hurling at them accusations of corruption and copious gunfire, Kree Sentry #459 crashed nearby.

Smudging with the alien

The alien robot had been damaged in a previous fight with Mar-Vell. A Kree scout ship recovered the Sentry, and started repairing and reprogramming it before it had even left Earth’s atmosphere. However, the ship was spotted by S.H.I.E.L.D. radar networks and a seemingly crazed agent rushed to fire a powerful missile at the alien ship.

Burdened by its cargo the Kree vessel was hit and had to jettison the Sentry in mid-reprogramming. Thus, when the curious Escheverra touched the crashed Sentry, he was treated as a memory peripheral and his mind was sucked in. While he was physically killed, he was now largely the mentality within the Sentry.

Seizing the opportunity, Escheverra-as-a-Sentry started ambling around. He also shot out an energy blast which flew over Mexico City and hit Estebban Carracus, instantly turning the very surprised man into the superhuman el Gato (usually rendered in English as the Cheetah, though it was once translated as the Jaguar).

Rampage near the Rio

Escheverra and Carracus grouped up and attacked buildings symbolising the American presence in Mexico. This became a systematic effort to raze corporate buildings near the frontier. It is quite likely that casualties ensued, especially among those trying to stop the powerful duo. 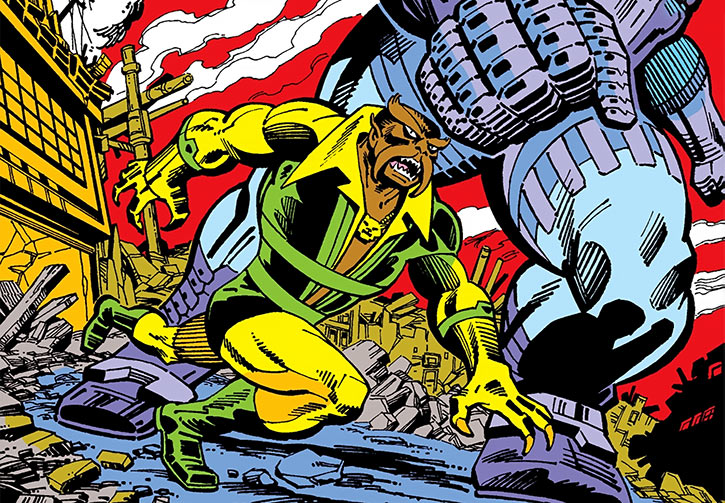 Using teamwork, the two criminals even managed to knock out the legendary champion Captain Marvel (Mar-Vell). The good Captain had been tracking down the Sentry, but briefly ended up in prison as a possible accomplice. He easily escaped once he recovered from his clash with Escheverra and Carracus.

Meanwhile, the Sentry and the Cheetah continued their rampage for several hours, until they suddenly found themselves under the mental control of Ronan the Accuser.

Down but not out

What happened next is unclear. Years later, the Cheetah was seen again in what seemed to be his super-powered form. He apparently had a small-time criminal career in the US, likely around Arizona and New Mexico.

While he may have somehow adopted a costume with fake claws (where ? how ? with which money ?), it seems rather unlikely – Carracus’s human form was downright scrawny, and a later person channelling his powers demonstrated high speed and prowess.

Thus, it seems likely to Cheetah’s powers had resurfaced at some point – albeit likely at a reduced level from what they were whilst he was operating with Escheverra.

Like many small-time supervillains, he was eventually gunned down by the Scourge of the Underworld program, during the infamous Bar With No Name massacre.

Out but not down

Oddly enough, he had two post-mortem appearances of sorts :

And, of course, people with a feline and/or feral them in the Marvel Universe have a propensity toward having regenerative abilities.

See the quotes and History, really. There’s not much to say beyond that.

The Cheetah was fast, violent, ferocious and a killer, with a deep hatred of American imperialism in Mexico oppressing the workers who etc. etc.

“You say you have no master, American — but you fight for the property of another man, as though you were his soldier and his slave ! WE NEED NO OTHER CRIME ! The judgement is guilt, and the sentence is DEATH !”

“You will be witness to the revenge we take this day — vengeance on your capitalist masters who have made our people slaves ! So speaks the silent Sentry and so speak I — el Gato — the Cheetah !”

Bonuses and Limitations:
Martial Artist is Contingent on DEX (-1). 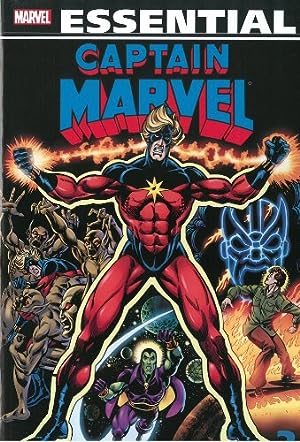 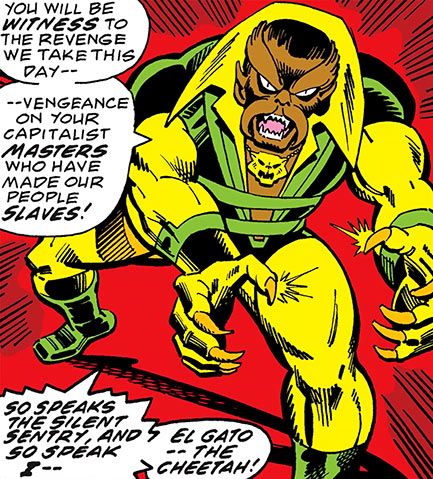 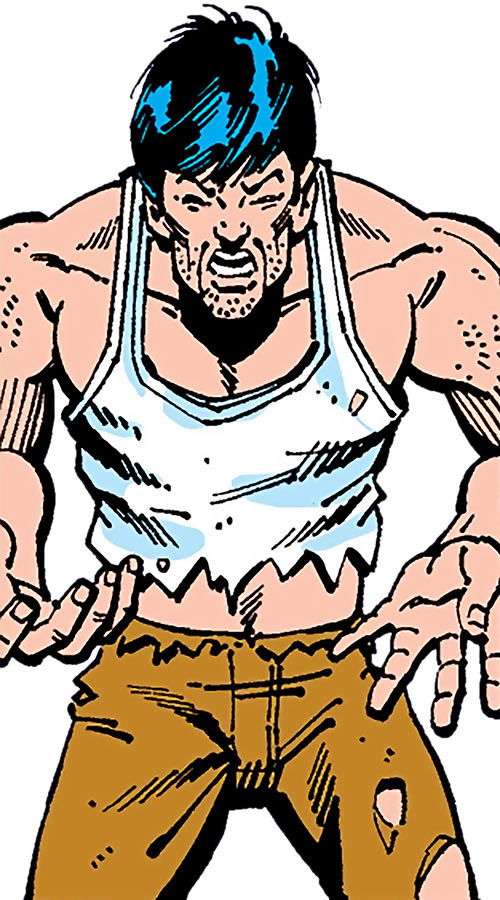