Cheetah’s most distinctive asset might be her manic intensity and raw presence.

She has tremendous energy, takes a lot of initiatives and something about her just compels people to pay attention. Her charisma has been described as animalistic and it suits the Cheetah just fine. She loves having people looking at her and wondering what the fudge is going on.

Her presence is so strong that with a suitable prop she can hypnotise people. However, a mentally strong person like Steve Trevor can eventually shake that yoke.

The Cheetah is physically adept, fast and agile. Jumping and climbing on a telephone pole then sprinting on the less-than-taut cables is not something that gives her pause. She steps lightly, is stealthy, and is super-good at tightrope walking (or sliding, or running). As befits her name, she’s also an excellent sprinter.

The Cheetah likes playing up the “wait, what ?!?” reaction her strange behaviour and costume evoke. She twice had her henchmen dress in ape costumes. The only point was to confuse witnesses about what could possibly be going on and who were all these crazy people. And it worked !

Cheetah knew a lot of things about Wonder Woman. For instance that the Amazing Amazon would be compelled to obey her if she caught her in her own lasso, that she was gaga about Steve Trevor, that she had a robot plane she could summon whenever she needed, etc.. But this sort of data was not difficult to get pre-Crisis.

On the other hand she grossly underestimated her strength, and didn’t know about the bullets and bracers thing.

Rich was apparently old Virginian money. She owned a large house on Chesapeake Bay and was quite affluent. Her known family — her niece Debbi Domaine — was also wealthy, lending credence to the idea that much of Pricilla Rich’s wealth was inherited.

On Earth-1, Priscilla Rich was a hustling mercenary and thief. She occasionally stole money for her own use, but was usually hired by moneyed interests to provide guile and/or violence.

Rich had her own crew of armed henchmen. They would enter any lucrative mercenary market. From stealing valuable animals from a zoo for a wealthy collector, to hiring out a small mercenary air force and armour squadron for some brushfire war. 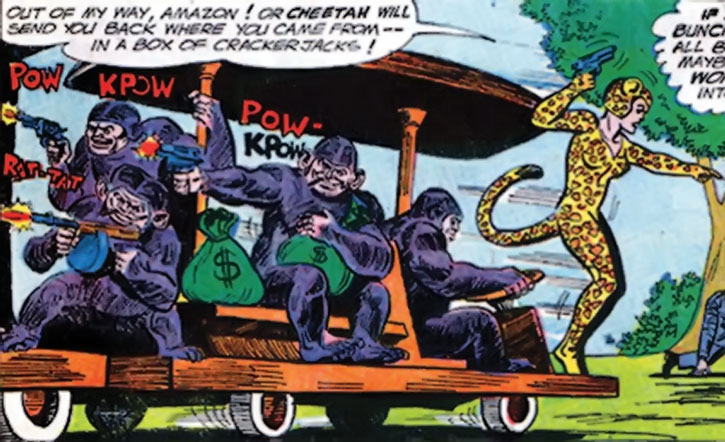 Cheetah had scant appearances. Yet one caption referred to her as Wonder Woman’s arch-nemesis. This history might be similar to the Earth-2’s Cheetah’s. But there’s no way to tell.

Though she was usually arrested at the end of her encounters with the Amazing Amazon, it would seem that she always swiftly escaped from prison. Her niece mentioned that sometimes aunt Priscilla would be gone for several months, which is too short for any prison sentence.

The Cheetah never seemed concerned when being sent to the slammer. One can definitely see her always escaping within weeks, laughing all the way.

Cheetah was once hired to steal a collection of rare, valuable animals from a zoo. She started by creating a commotion by entering the tigers’s cage. As the public came running to see what would happen, Cheetah’s well-armed henchmen, puzzlingly dressed in ape costumes, stole the animals.

They all fled in one of the zoo’s train-like cars that ferry visitors. However, they accidentally ran into Wonder Woman and were soon defeated. Cheetah managed to escape, swearing revenge.

Having observed that Wonder Woman had an interest in military officer Steve Trevor, the Cheetah ambushed him. She hypnotised him and had him snuggle with her. When Wonder Woman happened on the scene, she was so distraught that the lightning-quick Cheetah grabbed her lasso and restrained her with it. 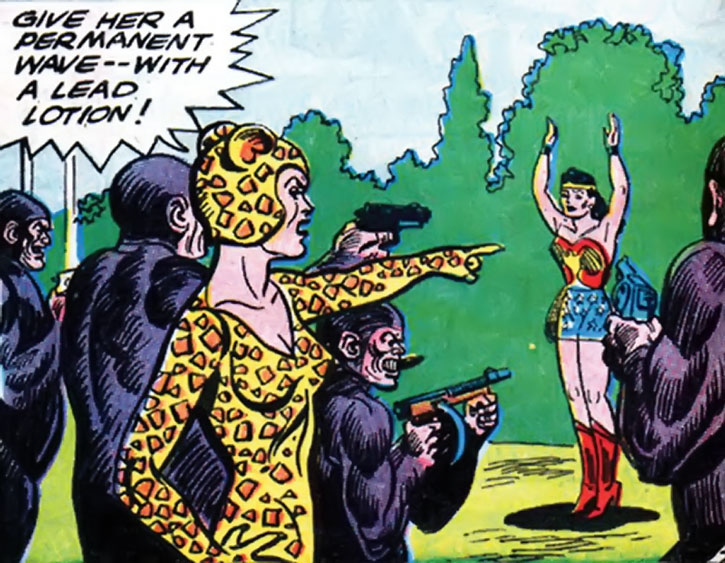 Knowing that Wonder Woman was compelled to obey by the magic lasso, she had her summon her invisible plane to fly her to one of her secret bases.

This hidden airfield was the headquarters of Cheetah’s mercenary military force. That meant about a half-dozen fighter-bombers, and as many tanks and field artillery pieces plus attendant crew. Howbeit this considerable equipment seemed to be WWII surplus gear, presumably intended to fight in poor countries and brushfire wars.

Cheetah ordered Wonder Woman to take off her bracers so her men could shoot her. But no Amazon had ever taken her sacred bracers off before. Thus, the results came as a surprise even for Wonder Woman. Free from the bracers, she turned into a raging juggernaut of destruction.

The Amazing Amazon wrecked the entire base before anybody could react. However, Trevor managed to stop her by slipping her bracers back on her wrists when she pounced on him. The fascinated Cheetah hid to watch. But Wonder Woman spotted her and dragged her to an Amazon prison to be reformed.

Cheetah got out very quickly, though. Presumably, she escaped before she was actually flown to Paradise Island.

Return of the fursuits

She and her henchmen soon attempted to rob a charity event. The henchmen again broke out their ape costumes – I suppose they liked wearing those It was organised by Diana Prince, and Wonder Woman was expected to make an appearance.

But the Cheetah and her crew were completely overpowered and were soon captured.

The Earth-1 Cheetah barely appeared after these capers. Ten years later, she was one of the Super-Foes – a band of baddies who were the opposite numbers of the “Super-Friends”. The Super-Foes were : 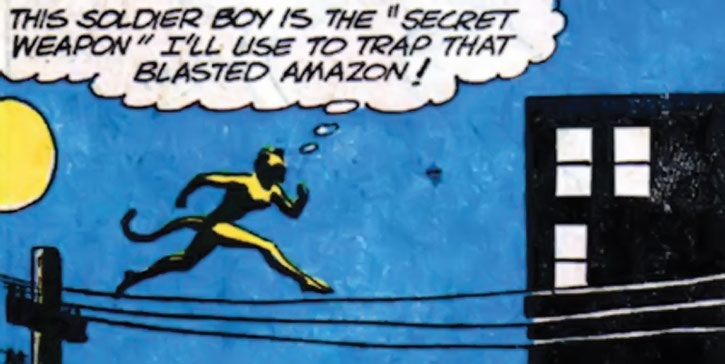 In their one known outing, they took on young protégés to help them fight their enemies. Cheetah’s sidekick was Kitten. She was an acrobatic teenaged girl in a tiger-stripes yellow leotard and a Cheetah-style hat. The sidekicks eventually turned against the “Super-Foes”.

(These events presumably didn’t occur exactly as depicted in the all-ages Super-Friends comic book. Yet, something along those general lines is thought to have occurred on Earth-1. Presumably the Super-Foes were organised more along the lines of the later Society of Super-Villains than the cartoonish gang depicted in the comics).

The rest of Cheetah’s career is unrevealed. It seems that she continued to serve as a mercenary, with her clients including the Kobra cult.

And death a note unsaid

In 1980 she was dying – apparently from a cancer that had gone terminal within months. It had been sudden enough regular employers of hers were unaware that she was sick.

Refusing to die in a hospital, Rich went back to her old Chesapeake Bay home. She wrote to her favourite niece, Deborah Domaine. Priscilla wanted to see her and confide in her the truth about her life before passing away.

Domaine came as soon as she could. But her beloved aunt was nearly dead, and delirious. Rich had noticed Kobra agents staking out her house, but died before she could tell Deborah to flee.

Ms. Domaine would soon be turned into a new Cheetah by agents of Kobra. They also told her the truth about her aunt.

The appearance of Cheetah in Wonder Woman vol. 1 #230 is odd. 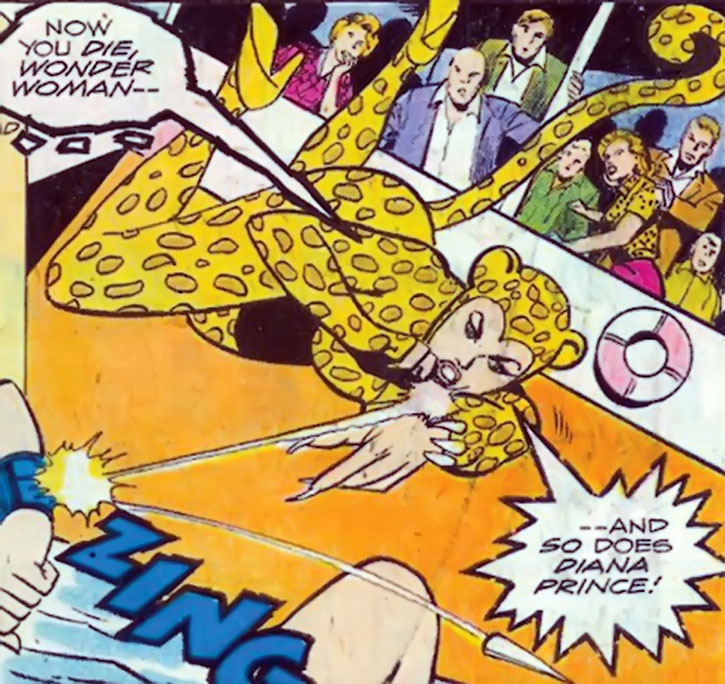 Logically, this woman was Earth-2 Priscilla Rich. Yet her overall style was closer to Earth-1 Priscilla Rich. It also foreshadows a physically more powerful Cheetah, which will come to exist as Deborah Domaine of Earth-1.

Our entry for Earth-2 Priscilla Rich notes the discrepancy. It conservatively presents this incident as specialised equipment and good luck.

But is is also possible to poach this appearance as inspiration for what the undocumented 1970s career of the Earth-1 Cheetah may have been.

A much less conservative reading of Wonder Woman vol. 1 #230 as fodder for an hypothetical 1970s Earth-1 Cheetah :

(Several of the tags used for this article, such as “master pugilist”, reflect this hypothetical version of Cheetah).

In this take, our No-Prize Hypothesis  is that the Kobra cult empowered her using an experimental procedures. Kobra agents seemed to consider that they were entitled to her services, and proved that they had germane technologies with her niece. But years later the procedure broke down, depowering her and resulting in a rapidly-progressing cancer.

Cheetah’s moves have an animalistic quality. People would often wonder whether the person in that suit was some sort of cat-woman hybrid rather than a human being.

Cheetah is hyper, aggressive, preening and jealous. She is forever looking for new and exciting ways to make money. The thrills and attention involved in acquiring it seem at least as important as the cash.

The henchmen working for hire also seem to be action enthusiasts, diving headlong into her strange plans.

Her plans tend to include surreal flourish. Such as :

This usually works, throwing her opponents off as they try to make sense of the situation.

The Cheetah is superiorly intelligent. She can and will come up with devious, cunning plans exploiting the weaknesses of her opponents.

Debbie Domaine considered that her aunt was a good person. Since she was but a kid and Priscilla hid her career from her, Domaine presumably just liked her eccentric, smart and energetic aunt. But this could interpreted as Earth-1 Rich having a split personality vaguely like Earth-2 Rich. With a sweet Priscilla side and an aggressive Cheetah side.

“Out of my way, Amazon ! Or Cheetah will send you back where you came from — in a box of Crackerjacks  !”

“No one double-crosses Cheetah more than once ! Not even 1½ times ! Give her a permanent wave – with a lead lotion !” (henchmen open fire)

“I’m ten times more beautiful than that female strongman ! I’ll fix her ! And I’ll use her weakness for that soldier-boy to do it !”

Bonuses and Limitations:
Hypnotism requires some sort of prop to transfix the subject’s gaze. Each suggestion takes at least a minute of work to be implanted.

Given the implied ease of her escapes from prison, having her have the full Thief Skill and throwing in one or two more APs into it would be reasonable. But it wasn’t demonstrated on-panel so it’s not reflected in the stats block.

Helper(s): Darci. For the two Priscilla Rich entries I am entirely, wholly, solely relying on Mike’s DCindexes.com database  for appearances and Earth-1 vs. Earth-2 classification of same. 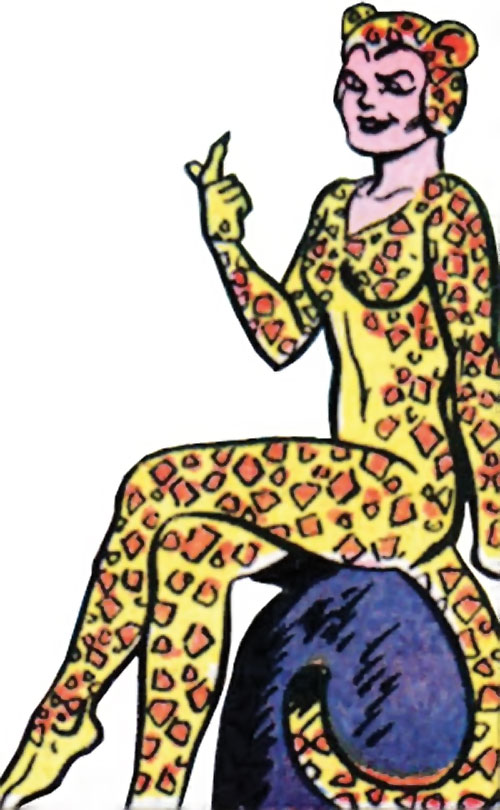 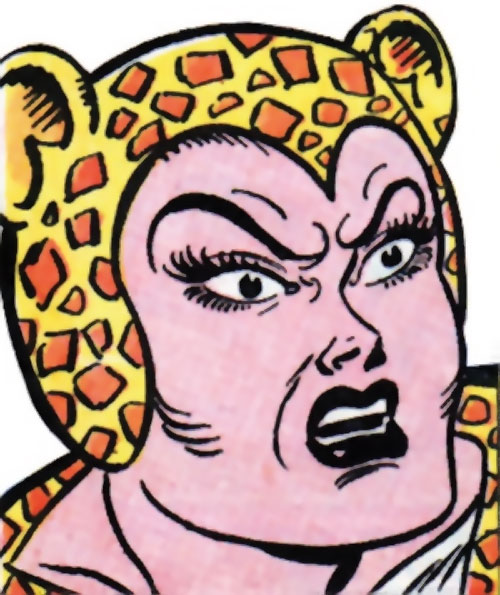 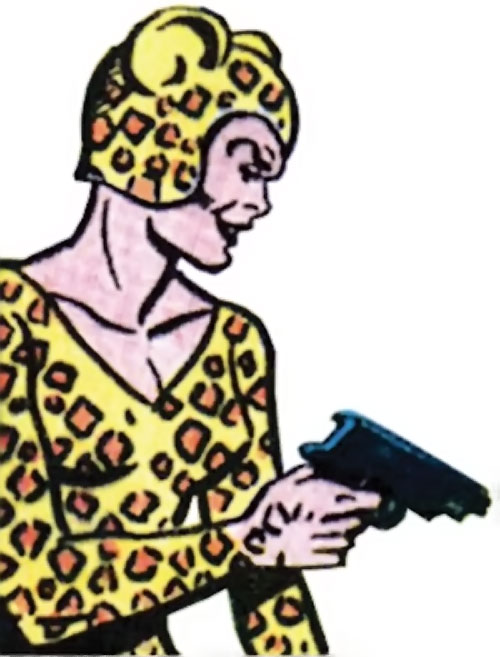 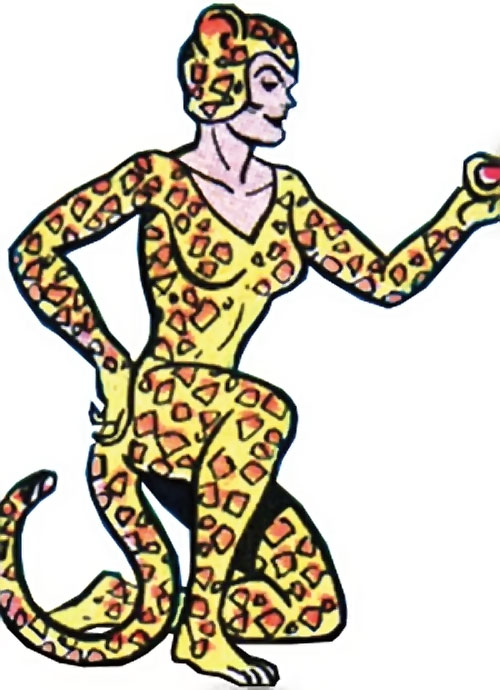 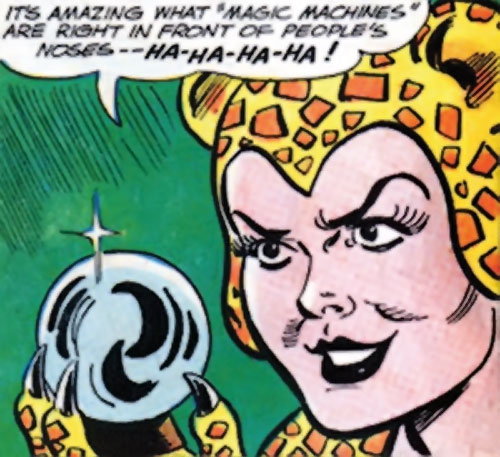 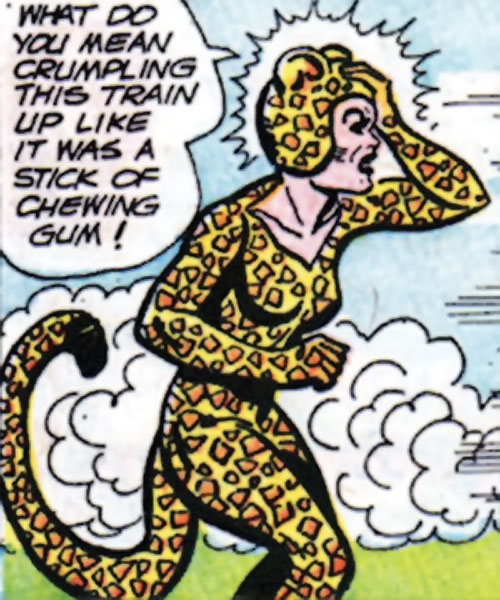 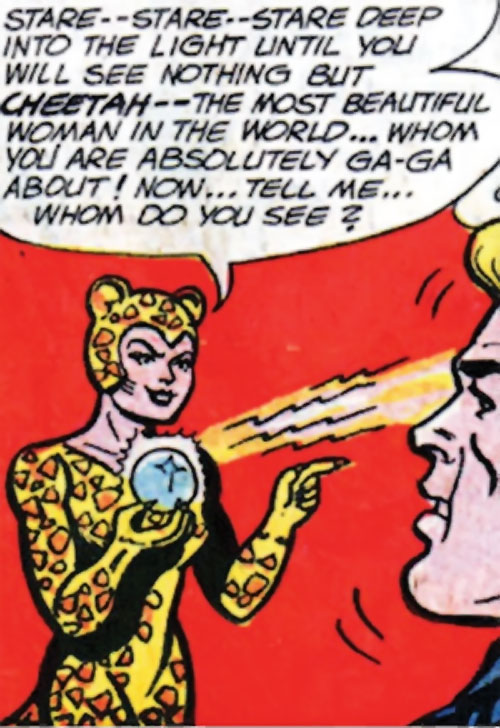 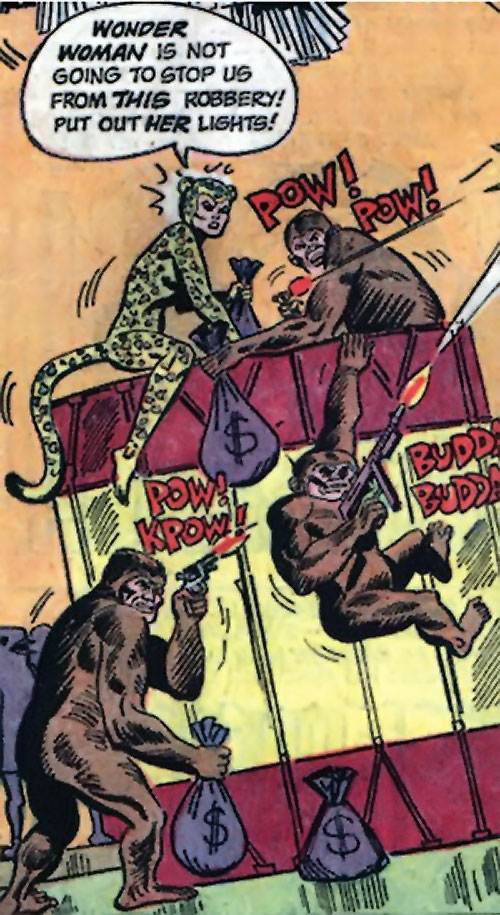