Carr is an inventive genius. Though his core expertise is chemistry, he can easily work in other areas of science and engineering. His first landmark invention was a radiation beam that could transmute matter, albeit the resulting matter would soon crumble into dust.

As Chemistro, Carr knew that he was no marksman and would likely miss moving targets. Thus, he routinely shot big, large, immobile things like floors and walls instead. Examples include turning floors to glass for his opponent to crash through. Or turning walls into phosphorus to have an instant flaming obstacle deterring pursuit.

Those tricks were pretty efficient, but were not enough to compensate for the fact that Carr wasn’t much of a fighter or tactician. Despite his incredibly versatile weapon, he could be forced to flee as he thought he was running out of options.

Carr followed a thorough bodybuilding regimen to become a super-villain. and it did make him much stronger than before. But he lacked hand-to-hand combat experience and a real killer instinct, so he eventually gave up his regimen.

Mr. Carr, a chemical engineer, designed improved additives for Mainstream Motors – then a major US automobile manufacturer. Carr bitterly described his position as that of a flunky.

His under-employment may have been a result of racism. However, his workplace seemed unsegregated by early 1970s standards. Thus, it is possible that his temper and poor social skills also played a role.

Feeling that he was a misunderstood genius, Carr started his own experimental program on company time so as to fully express his skills. 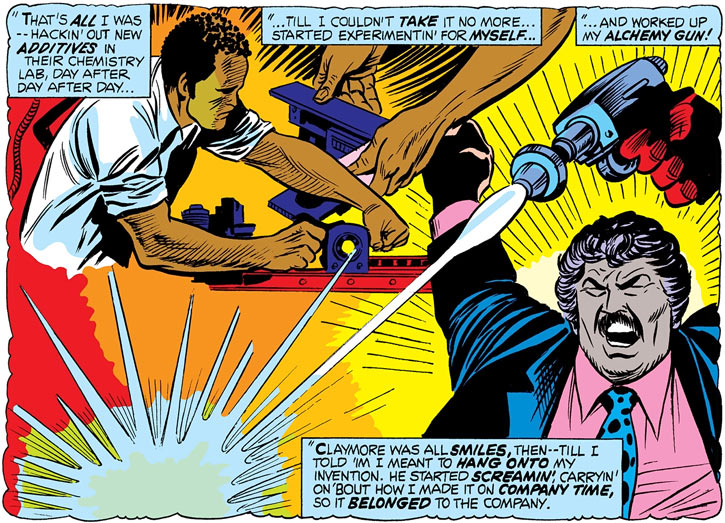 Carr actually *was* a technological genius. He built an incredible beam weapon called the “alchemy gun”. Horace Claymore, the President of MM, was impressed and claimed that Mainstream owned the technology, since it had been developed on company time.

Carr refused to give away his invention, and Claymore fired him. The bitter Carr only wanted to make them pay. Thus, he decided to become a super-villain rather than develop his technology.

This took months. The scrawny Carr threw himself into a slow and steady bodybuilding program. He then designed, sewed and dyed a costume. As Chemistro, he would have his revenge.

His attempts at terrorism against Mainstream Motors were haphazard. His first strike sent a secretary, Annabelle Crawford, crashing through a floor Chemistro had turned to glass. She was rushed to the nearest clinic, operated by Drs. Temple and Burstein.

As Crawford was receiving treatment for her lacerations and concussion, Horace Claymore, hired Temple’s boyfriend on the spot – hero for hire Luke Cage. Howbeit, Claymore and the rest of MM management chose not to tell Cage that they knew perfectly well who Chemistro was.

Cage, not trusting his employers either, spied on their next meeting. Thus, when Chemistro attacked anew and was repulsed by the hero for hire. Reasoning that Chemistro would probably strike at the next public test drive of Mainstream Motors prototypes, Cage went undercover as a test driver.

Thanks to Cage, when Chemistro wrecked the test car while it was doing a ramp jump, nobody was killed. Cage emerged from the burning wreckage and chased Chemistro down.

Cage caught Carr. In a blind rage, Carr shot himself in the foot, turning it into solid steel to kick Cage in the face. But Carr immediately realised the problem with this moment of anger. His right foot soon disintegrated after having been transmuted.

Carr was aghast at having mutilated himself and wrecked his own life. Thus, he did not resist arrest.

After this disaster, Carr served his time. Whilst in prison he renounced his criminal projects and, perhaps an even greater benefit to society, got himself a non-stupid haircut. However, since he ambled around on crutches, was missing one foot and had long since stopped working out. Thus, he was an easy prey. Fellow con Arch Morton beat the secret of the alchemy gun out of Carr.

Morton was released a bit before Carr was, and built his own alchemy gun. He did not build it right, however, and the gun exploded in Morton’s hand. Morton somehow internalised its powers, and a new Chemistro was born.

After his release from prison Carr briefed Cage about Morton. Curtis even built a neutraliser that the hero for hire used to defeat Chemistro.

Life sucks and then it kills you

Things then went badly for Carr — as a crippled, Black, ex-con, ex-supervillain with a record of anger management issues, finding a job was basically impossible. Now living in a dilapidated tenement, he resumed tinkering with his tech to pass the time.

Carr was often bed-ridden, presumably because he couldn’t buy proper prosthetics for his foot. And somehow, things got worse. 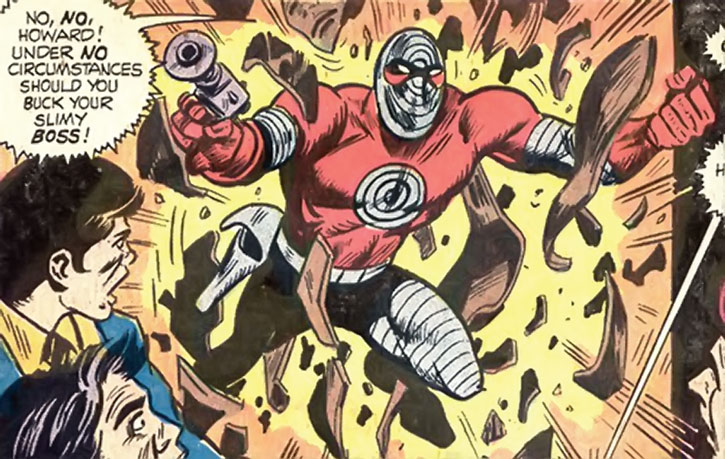 Curtis’s older brother Calvin was a bad seed, and was released after ten years in prison. He decided to visit his little brother, whom he knew had been Chemistro. Calvin stole the alchemy gun Curtis had rebuilt and became the third Chemistro. Among other brutal exploits, Chemistro turned Bob Diamond and Colleen Wing into glass statues.

Feeling that everything was his fault, Curtis saved Diamond and Wing. He developed a cure to restore them to flesh. Grateful for this, Luke Cage’s partner Iron Fist arranged for Carr to get a job with Stark Enterprises. He was hired in 1983.

Working for the (Iron) Man

Now an engineer with one of America’s most prestigious firms, Carr continued to help Cage and Iron First. For instance, he developed a spray the heroes used to defeat Chemistro (Calvin Carr). Curtis was also successful in his job, and Tony Stark put him in charge of a new lab doing applied research in prosthetics.

In 1989, the lab was once attacked by the Wrecker, who wanted to kill Iron Man. The fight was not going well for shellhead. Therefore, Carr tried to convince his brother to come in as Chemistro to help. Calvin instead decided to kill Iron Man.

Before he was vanquished, Calvin sadistically destroyed his brothers’ good foot. Undaunted, Curtis announced that he’d built his second prosthetic foot himself.

In 1992, Carr stole technology from Magnum Munitions, a subsidiary of Cybertek. Apparently, he considered Cybertek responsible for cripplings worldwide. Perhaps they manufacture anti-personnel mines. Carr also knew that they held technical secrets he could use in his prosthetics lab.

To conduct these thefts in the name of poetic justice, Curtis developed the High-Tech identity. 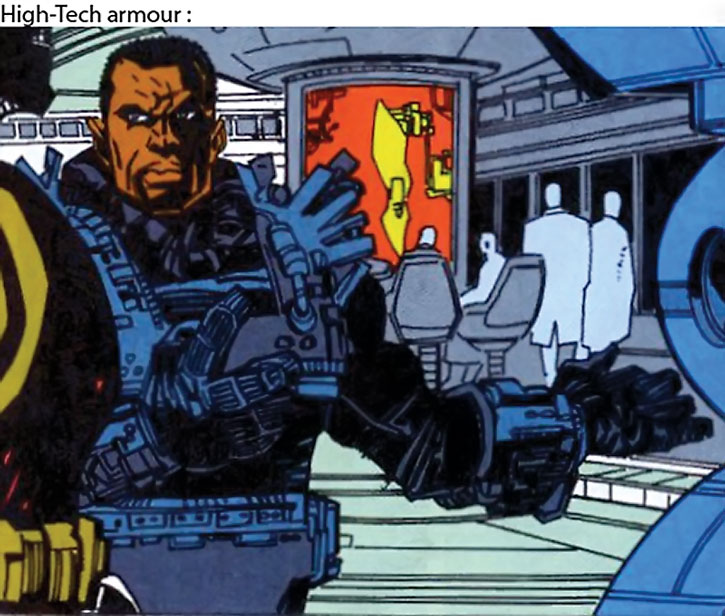 However, Carr just did not have the chops for such ambitious one-man industrial espionage. He did steal some key components but there were hidden tracers. As a result, two parties came knocking at his door. One was Magnum Munitions head of security, Mr. Lawson (riding a combat vehicle called Terrordome) and the other was former Cybertek employee Deathlok (Michael Collins).

Deathlok empathized with Carr’s cause, and destroyed Terrordome. Carr then turned himself in, but Magnum Munitions denied sending Terrordome or that anything had been stolen, for unknown reasons. Carr walked free and returned to working for Stark Prosthetics.

At first he was just portrayed as a bitter villain with anger issues. However, he apparently intended to have a normal life and a family once he had gained his all-important revenge.

He then became a guy who was big on redemption and making up for his mistakes. Years after his deeds, Curtis still felt quite guilty and deserving of punishment for what he had done as Chemistro.

As the years passed he became increasingly more secure in his moral duty to do good. Thus he again came to consider that the ends justified the means, just like he had done as Chemistro. But by then he was entirely willing to face the consequences of his actions.

The cut-and-paste approach would be some connection with Dr. Alchemy/Mr. Element and the Element Gun/Philosopher’s Stone. After having thus been a minor Flash villain as Chemistro (or maybe a Black Lightning villain), he reformed and worked at Wayne Enterprise, stealing from Lexcorp as High-Tech.

Curtis Carr (as Chemistro I)

Get on the good foot

After he accidentally mutilates himself, Carr’s stats change.

On the plus side, his MIA disappears.

After he’s hired by Stark his wealth shoots up to 005. Carr eventually develops prosthetics that allows him to practically ignore his Physical Restriction, and to resume physical training that brings his Physical Attributes back to 03.

After his brother destroys his other foot, his Physical Restriction worsens, but the prosthetics keep it under control. He also acquired a Low Connection and Low Credentials to Stark, Inc. whilst employed there. It is also very likely that he developed Scientist (Computers): 04 during that time.

By his 1991 appearance, Carr’s Physical Restriction is entirely gone. His current ankles and feet are full cybernetics, and no longer comparable to real-world prosthetics. His Wealth is about 006, and his Physical Attributes 03.

He built up his Thief (Security systems) up to 06 whilst developing the High-Tech identity. It was technically a Secret Identity, though it did not hold very well.

He also wore a suit of armour and suite of equipment of his own design, the High-Tech gear. Little was seen of it, but here are our notes: 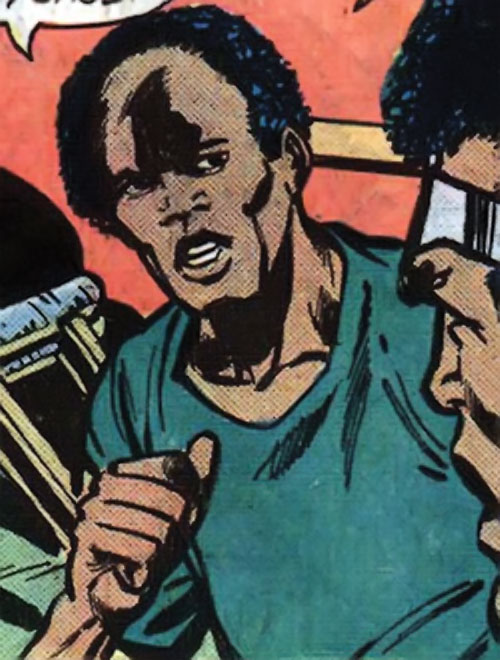 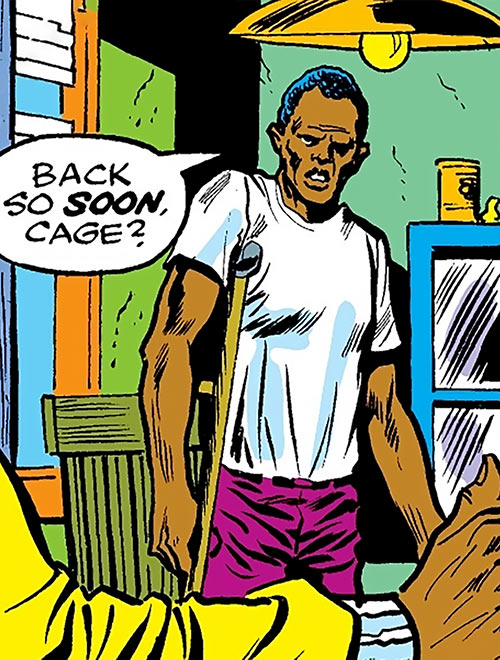 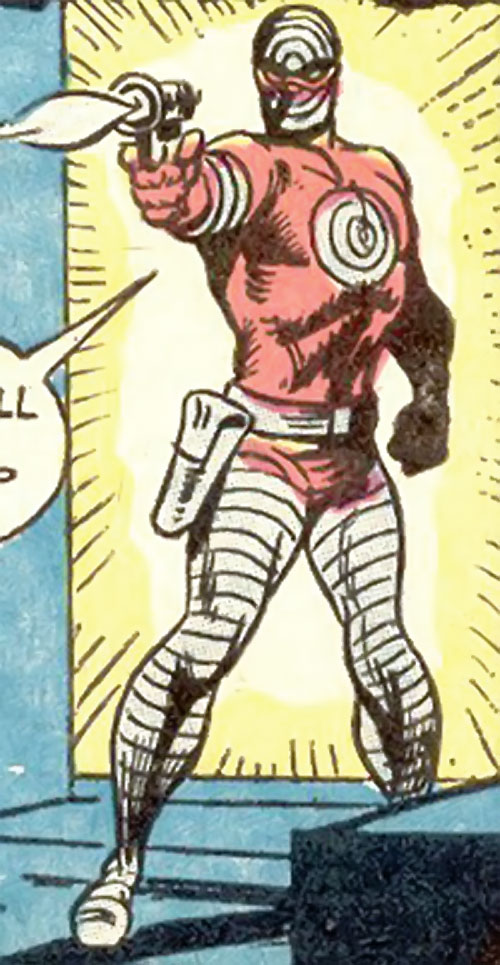 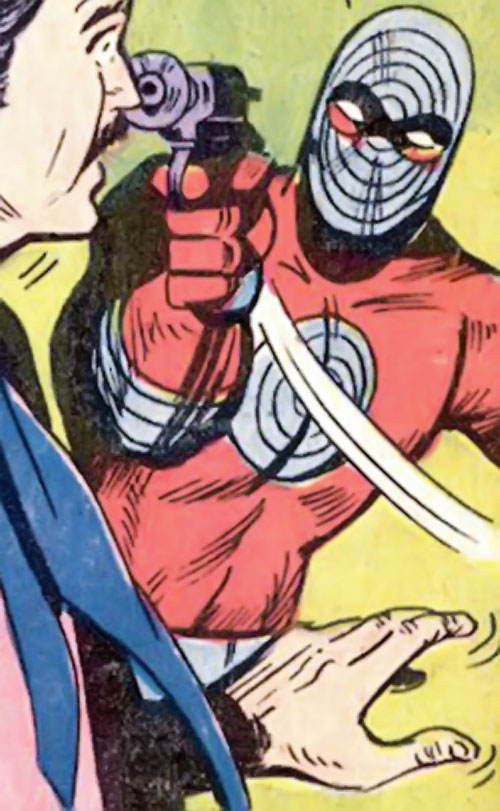 As a Stark engineer : 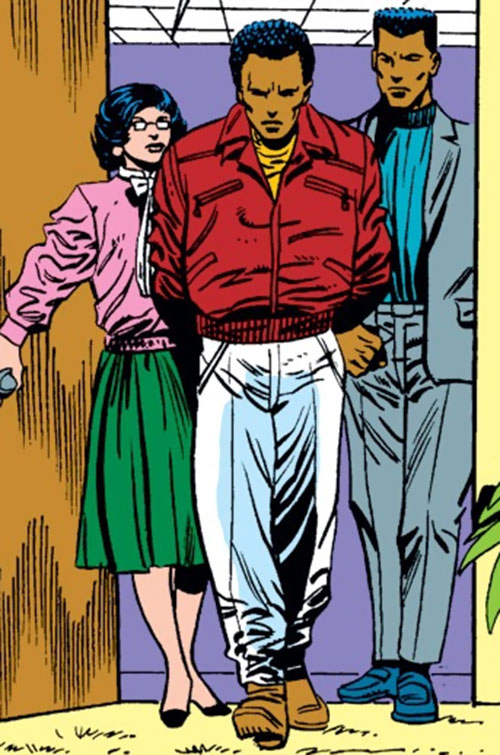 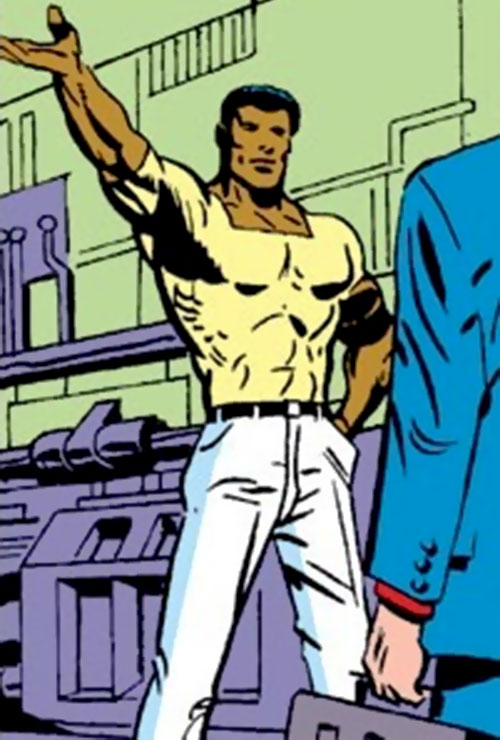 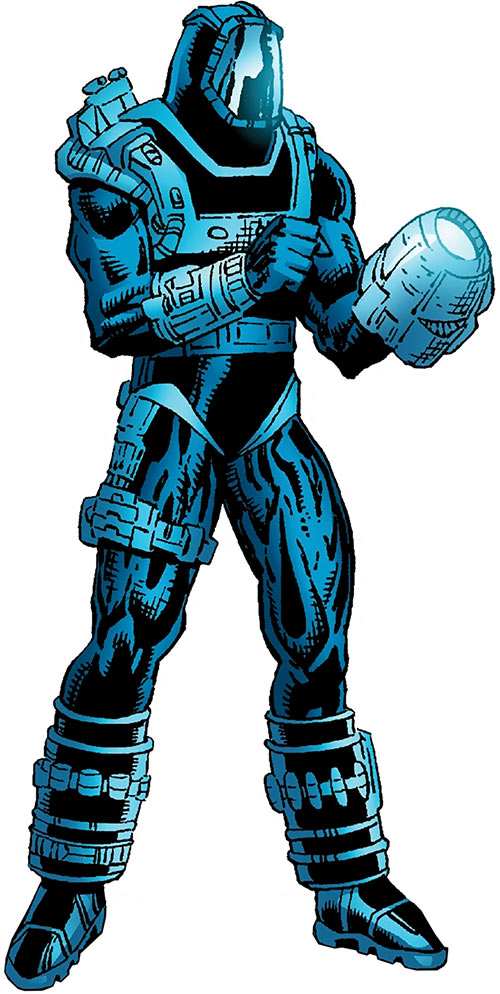 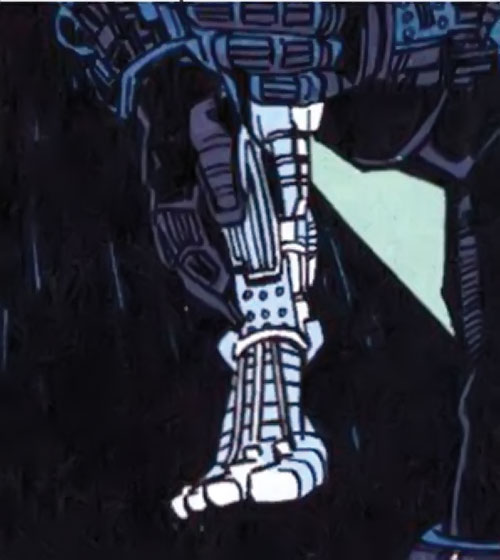