Cheshire Cat is a mutant with the power to turn himself invisible to a wide spectrum of EM energy waves. This includes the visible spectrum, Radar, X-rays, infra-red, and ultra-violet. He may become selectively invisible to any of these. He can make any object or person invisible as well, as long as its mass does not exceed his carrying capacity (Str).

Originally, when he was smiling (or laughing, grinning, or any similar facial motions), his smile would be visible. It was apparently entirely psychological in nature. He overcame this limitation fairly quickly.

Cheshire Cat has been implanted with three ten-inch long cybernetic claws on each hand. These are housed in the muscle of his forearms. Developed by his father’s R&D company, they originally were only six-inch long blades, but as he grew, they had to be replaced.

Recently, Cheshire Cat was contacted by his older brother, Charles, whom he did not know existed. Charles had been subjected to experimental gene therapy by his father’s scientists to enhance his powers. But this resulted in his becoming paraplegic.

With a merging of their DNA, Charles’ paraplegia was reversed. Furthermore, Cheshire Cat developed a new power, the ability to see higher into the IR and UV spectra. This gives him superior night vision. This happened near the end of his “Year One”, and other changes soon followed.

Cheshire Cat is a talented thief and spy, with an almost intuitive understanding of security systems. He is one of the best thieves on three continents, aided by the nature of his powers.

In combat, Cheshire Cat will typically do his best to stay at a distance and fight with ranged weapons. This is his most effective ability. If that becomes unfeasible, he will use distraction tactics like smoke bombs, his invisibility, or his other weapons. He will strive to get in close and attack hit-and-retreat style, eventually bringing the opponent down.

At this point in his career, he will often open up by entangling the target in mini-bolos, then hitting them with paralytic flechettes .

Jameson Alexis Masters led a boring existence as a child. The only (known) son of wealthy parents, his life was comprised of dull social events, boarding schools, and the upper-crust. Jaime learned the skills of a thief one summer in Paris. That was under the tutelage of the man called the Black Fox, Europe’s finest jewel thief.

With the emergence of his mutant invisibility and superhuman agility, Jaime quickly became an accomplished thief.

By the age of 15, Jaime already had an international reputation in his secret life. He was one of the most successful thieves in the business, the Cheshire Cat. Masters specialized in infiltration and information retrieval while leaving no trace.

He was so skilled that he was never photographed, never arrested, never suspected. He never had a warrant issued on him. In fact, many times he left no indication that any crime had even been committed.

Somehow, Jaime’s father F. Robert Masters deduced that his son was actually the master thief Cheshire Cat. He approached his son and offered him the opportunity to use his skills to benefit his own company, Masters and Dunkirque. Jaime agreed. His father had him equipped with some specialized hardware and biometallic cybernetic claws to supplement his abilities.

Jaime operated for M&D for a full year. But he eventually grew bored with stealing corporate secrets from companies who made things all too easy for him. He began to act as an adventurer on the side, discovered that he enjoyed it, and soon went into it full-time.

(The event that caused Cheshire Cat to become a hero has never been specified, simply because I have never regressed that far in his backstory.)

During the next year Cheshire Cat met and fought a variety of criminals and goons, and met some of the worlds’ great heroes, including one who became his eventual partner, the telekinetic Tach.

Along with several other loner heroes, they formed a loose-knit group of adventurers calling themselves the Challengers (no relation). He still occasionally did work for his father.

When the Challengers halted the destruction of a major landmark building and stopped the blackmail plot behind it, a local paper persuaded them to organize. Sponsored by the paper and a variety of small investors, they incorporated as Challengers Inc.. This was a nonprofit organization for anyone with a problem. Cheshire Cat was the group’s security specialist.

Cheshire Cat’s major troubles began toward the end of his first year. He was kidnapped by Charles, the older half-brother he did not know he had. Charles had been crippled as a result of their father’s attempts to augment his mutant powers. Charles wanted Jaime’s help in restoring his genetic code to normal, using Jaime’s own unaltered DNA as a template.

Jaime confirmed Charles’ story by breaking into his father’s personal files and discovering his father’s plans for his own augmentation. Thus, he agreed to Charles’ request and his half-brother was restored to normal. Cheshire Cat’s powers were subtly altered by the process.

Jaime and his father were estranged over the event, and went their separate ways. Within weeks after Jaime made it clear that he wouldn’t be used by his father, there was an attempt on his life. It came very close to succeeding.

Frightened by the attempt and shocked by Charles’ assertion that the attempt originated from their father, Jaime took refuge by faking his death. He operated for a time under an assumed name with former enemies, the Wonderland Inc. gang.

Cheshire Cat is a little less than average height for his age but quite muscular in a gymnast kind of way. He is quite attractive for a man, with shaggy 1980’s blond hair and blue eyes that women go nuts over, and, to his mortal embarrassment, dimples. He has been likened to a Rafael angel.

As Masters, he favors good clothes in stylish fashions, and spares no expense. He wears whatever is appropriate to the situation and company, but always in good taste.

As Cheshire Cat, Masters favors dark motifs, as they go with the shadowy image he likes to portray. His original uniform was a tan bodysuit with a black stripe motif, dark blue knee-high boots with a black stripe down the fronts, a tooled-brass belt holding his gear, and a dark blue shoulder and chest area.

During this period, his wrist-launchers were fairly large and clunky. They were more or less obvious, though none of his foes ever attempted to deprive him of them.

His most recent variation of his costume is overall dark blue, with the stripe motifs in tan.

He sometimes wears either latex appliances as a mask, or (usually when in civvies) mirrored wraparound shades.

Cheshire Cat originally became a hero because his powers (and natural talent) made stealing and corporate espionage too easy for him to gain any excitement from it.

In either of his personas, Cheshire Cat is a social chameleon. Never stable, he changes to fit the mood, locale, or situation. He has fit in equally well as a punker as a socialite, or a businessman, or any number of other roles he has seen fit to take on.

In spite of his seemingly carefree attitude, Cheshire Cat takes his life as an adventurer very seriously. Although he digs the thrills, he is very conscientious and responsible about how and when he uses his powers.

Previously an almost purely defensive fighter, he has recently discovered the value of a good offense. Even more recently, he determined how to achieve an effective balance between them.

Ches is neither particularly vengeful nor hot-tempered. But when pushed too far can be deadly. As with any cat, to tick him off is to invite retribution. He is quite capable of killing if the situation warrants it strongly enough.

As far as combat style, Cheshire Cat is an avoider. He tends to depend on stealth, tactics, and subterfuge to resolve a situation. However, once he gets started, he is effective as anyone else. Ches enjoys working as a team member, and often throws in with just about anyone whom he perceives as needing his help.

If Ches has one problem, it is in his penchant for pretty women. Ignored as a child, he seeks the company of beautiful women to make up for it. Not that he has any trouble attracting them.

He has the unfortunate tendency to make friends with women on the wrong side of the law. Both of his major girlfriends to date have been mercenary villains.

(Before becoming a hero)
“I’m the best there is at what I do… And what I do… is boring as hell.”

(Becoming visible behind a group of thugs) “Surprise.” (knocks heads together)

(First facing the White Rabbit) “Oh, you have GOT to be kidding me.”

Cheshire Cat’s primary origin places him firmly in the Marvel Universe, where he teamed up with Spider-Man, and had conflicts with Shrike, Beetle, Mastermind, Juggernaut, and the White Rabbit (surprise, surprise). He learned his thieving skills mostly from the Black Fox.

CC had his own gallery of rogues in the form of Wonderland Inc., a group of themed mercs. If porting CC over to the DCU entirely, the obvious thing is to use him to replace Cheshire, as they have similar abilities (if not stats), who has turned over a new leaf.

If not, make him a protégé of Catwoman, and replace his rogues with the Royal Flush gang.

Both his girlfriends were designed as replacements for existing characters, Nightblade for Ten of the Royal Flush gang and Mouse for Black Cat. If porting Cheshire Cat over to exclusively DCU, those characters or their DCU replacements can be used in his backstory.

Bonuses and Limitations:
Invisibility: Affects Sight. Can become Selectively Invisible to specific spectrums of EM energy, but when selecting a specific frequency (i.e., X-rays or IR), he is *not* Invisible to other spectra. (cumulative FC of 0 ), Usable on Others as long as the total Weight does not Exceed his Str.

Due to the way Gadgetry works in the MSH Classic game, Cheshire Cat had to put a lot of time , money, and effort into building his gadgets. And if they were damaged, he couldn’t replace them just by returning to his HQ. He had to rebuild them, paying costs and taking all the time required, and making repair rolls and such.

For flavor, this writeup assumes the same will continue to be true, and the best way to reflect this is to have them not be HP-paid items. Hence his HP total does not include Gadget fees.

Source of Character: Homebrew of MSH Classic RPG, circa 1984. 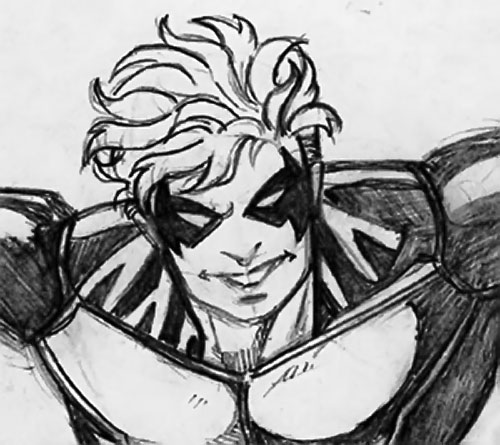 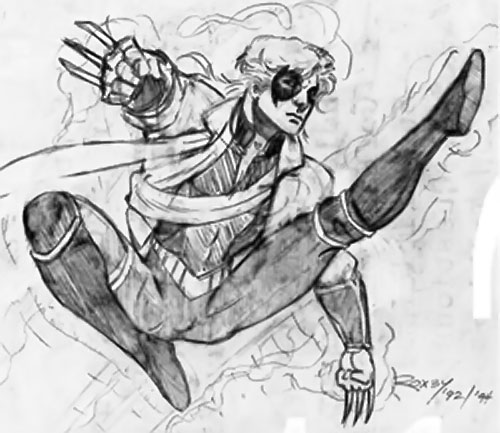 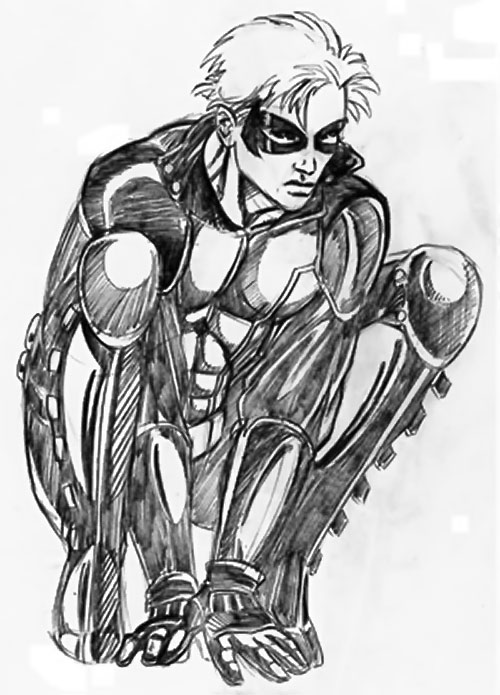