Simply put, Cheshire is one of the deadliest assassins in the world. Through methods that have yet to be revealed, she has attained a level of proficiency in hand to hand combat, stealth, infiltration and assassination techniques that can be matched by very few individuals in the world.

She is clearly a gifted athlete, which is not that surprising due to her pedigree. She also is far stronger and faster than most humans of her relative age and size. By combining her natural gifts and her mastery of martial arts, she can man-handle most human opponents with ease.

By adding the use of guile, deception and cunning Cheshire has proven that she can even battle groups of superhuman beings to a standstill. Though she has yet to face an opponent of world-class calibre, she has earned two decisive victories over the young Atlantean Aqualad in hand to hand combat.

The use of weapons

Chesire further augments her natural ability and martial skills through the use of a series of simply, yet deadly weapons. Her trademarked tools are a pair of sai, which she uses for deadly effect. With her sai in hand, she is easily capable of striking down anything, from live targets to projectiles streaking at her through the air (like arrows) at great speed.

She also makes use of a series of thrown implements, usually darts or shrunken, which on their own have not proven to be deadly. But when combined with the poison that Cheshire coats them with, these small implements of harm become potentially deadly.

The young woman who would one day be known only as Cheshire never stood a chance of having any form of normal life. Her parents, Paula and Lawrence Crock, were career criminals and mercenaries, until Paula found herself crippled and apprehended by the authorities during one of their jobs.

With their mother imprisoned, there was no moderating influence on the Crock sisters’ brutal father, who focused the majority of his attention on his oldest daughter, Chesire. She bore this burden for as long as she could, until one day something broke within her.

With a final emotionless farewell to her younger sister Artemis, she disappeared into the Gotham night, much like her future namesake.

She next surfaced during the attempted assassination of Doctor Serling Roquette on August 8th, in Happy Harbour. A price was placed on Roquette’s head due to her creation of a weaponized cloud of nanites that consumed digital information, consequently destroying all of the media that it was stored upon in the process.

They realized the Serling Roquette was the only individual who could create a countermeasure for the nanite cloud, and immediately set out on removing her as a threat.

Chesire was the closest agent on the Shadow’s payroll to Roquette’s location and was thus assigned to terminate her threat. When she actually arrived at the good doctor’s location, she found her under the protection of “The Team”. Cheshire observed the group silently awaiting for the first opportunity to strike.

First clash with “the team”

It came when Superboy and Robin left to stop an ongoing attack by the nanite cloud. With them gone, Chesire decided that a better opportunity would not present itself. Her first attempt to kill the doctor failed, but despite this she did manage to not only drown Kid Flash but she also defeated Aqualad in personal combat. 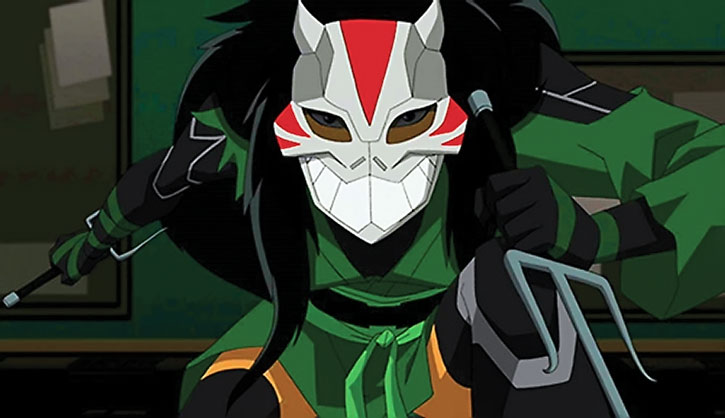 It was only the timely arrival of Miss Martian, who managed to resuccitate Kid Flash, and the added distraction of Artemis that forced her to abandon her attack on Roquette.

After defeating both Artemis and Aqualad once more, Chesire prepared to assassinate Serling. Fortunately for Roquette, Chesire realized that she had already completed and activated her countermeasure, rendering the nanites and her assassination meaningless. With her whole purpose for being present rendered moot, Chesire retreated and left Serling alive.

When she exited the building, Cheshire found herself ambushed by Artemis. In the process, she lost her trademark mask. She waited with a sly grin for the exact moment when Artemis recognized her, and when she did simply threatened to reveal their shared parentage to her new friends if she remained in their custody.

Artemis, fearful of her new team’s reaction, stood aside and allowed Chesire to retreat.

Cheshire reappeared a short month later, during the peace talks between the neighbouring countries of North and South Rhelasia. She was hired to assassinate the third party arbitrator in the negotiations, Lex Luthor.

Her first attempt was decidedly inelegant (she fired a rocket propelled grenade at Luthor’s limousine). Yet it would have proven to be effective if the young hero Red Arrow had not been present to intervene during the attempt.

Unfortunately for her, Red Arrow and the local authorities managed to apprehend her before she could make good her escape, and she wound up in prison.

Despite her capture, Chesihre remained confident and in good spirits as she knew she wouldn’t be imprisoned for long. She passed the time by teasing Red Arrow with vague and flirtatious responses to his questions regarding her employer’s identity.

The whole wide world of sports

Her game went on until the moment her father, the Sportsmaster, blew a hole with an explosive device and freed her from the cell. The two assassins took to the air in an awaiting helicopter and flew off into the ever deepening gloom of the Taipei night.

The two returned to their employer, Ra’s al Ghul, to regroup. But they failed to notice that Red Arrow had placed a tracking device on the helicopter during their frenzied escape.

Cheshire’s reunion with Lawrence was not a happy one. While the father daughter duo awaited the master assassin, they bickered with a familiarity that can only be possessed by family. They were eventually interrupted by Ra’s Al Ghul who appeared to instruct them on their next steps.

To their shared surprise, Ra’s abruptly stopped speaking and pointed out a figure that had been sureptitiously observing them from a nearby rooftop.

To her amusement, Cheshire recognized the red-clad form of Red Arrow, and in an instant she found herself racing towards her youthful foe. She gained access to the rooftop with a series of quick leaps, all the while parrying arrows that hurtled towards her with a graceful ease.

The two shared a quick and violent struggle that lasted for only a few moments, before the Sportsmaster entered the fray.

At that moment, Chesire stood back and watched her brutal father deliver a one-two shot with a pair of explosive javelins, that drove Red Arrow off of the rooftop and into a nearby river. Never satisfied, Sportsmaster threw a final javelin into the drink behind Red Arrow.

The javelin exploded with incredible force and left little to the imagination as to the fate of the young hero. Chesire watched impassively as the battle concluded and after a moment of contemplation, returned with her father to receieve Ra’s next instructions.

At Ra’s command, the two returned to the peace talks and once again attempted to assassinate Luthor and the leaders of Northern and Southern Taipei. All seemed to be going according to plan, until Red Arrow miraculously returned from the dead to reappear on the scene.

He had apparently survived Sportsmasters explosive attempt on his life, and to make matters worse he had brought a friend to the “party”; Aqualad.

Despite this, the pair of assassins (along with a dozen “Shadows”) continued their assault upon Lex Luthor and the peace talks. Cheshire immediately engaged Red Arrow once more, and despite the seriousness of their situation, seemed to enjoy the fight.

In fact, it seemed that she was pleased to see the hero alive. As the battled continued, Aqualad’s supreme power over water and Red Arrow’s trick arrowheads turned the tide of the fight. Rather than be captured once more, Cheshire dropped a “flash-bang” type grenade that concealed both Sportsmaster and her own escape from the scene.

At this time, neither of the pair have yet resurfaced.

Like her younger sister Artemis, Cheshire is a beautiful young woman of mixed decent. Unlike her sister, her Vietnamese heritage has manifested itself strongly in her features. She has dark brown eyes, to the point of being nearly black, with equally dark and spiky black hair.

She is tall and lithe, with a generous figure and an olive complextion.

While she dressed appropriately for the job, the outfit she normally wears while working is a dark green and black coloured kimono. It is torn and shredded in strategic positions. The kimono is tied around her waist, where its length reaches just above her knees. A pair of stylish black knee-high boots finishes off her costume.

Finally, only in the rarest circumstances is Cheshire’s face bare. Instead, she employes a black, white and red trademark mask that resembles a cat’s head with a wide grin. The mask, of course, has been fashioned to resemble her namesake; the Cheshire Cat.

The Crock daughters present an interesting take on the entire nature versus nuture argument. Where Artemis survived her parents, in particular her father’s, brutal upbringing with he conscience intact, Cheshire did not. In its place, there seems to exist only a young woman with extreme sociopathic (if not psychopathic) tendencies.

Cheshire clearly has a killer’s instinct, and enjoys the chase even more than the kill itself. She will play with her victims, often employing a dry sense of gallows humor to taunt them during combat, savouring each moment until it culminates in the actual assassination itself.

Collateral damage doesn’t concern her in the least as she will do anything necessary to attain her goals. Firing rockets into crowded areas, murder, and blackmail are just some of the examples of what she is capable of.

Her one redeeming quality is that if she makes an agreement, she sticks to the letter of it. She will not waiver, and will follow orders to the letter even if it countermands her natural instincts or desires.

Artemis: “Dad will come after you.”
Cheshire: “Let him. I’ll disappear … like the Cheshire Cat.”

“Haven’t you learned anything ? In this family, it’s every girl for herself.”

(After peppering Aqualad with multiple shuriken) Cheshire: “Hmmm… that had to hurt.”
Aqualad: “Atlantean skin is quite dense.”
Cheshire: “And my shuriken are quite poisoned.”

(Upon recognizing Artemis) “This gig is getting interesting.”

(To Artemis upon being pursued) “I was hoping it’d be you.”

(Once again, after peppering Aqualad with multiple poisoned darts to the chest) “Let’s test the limits of your jellyfish immunity shall we ?” [knocks Aqualad out after a brief skirmish] “There, limit tested.”

“So you finished the virus. Eliminating the reason for your elimination, but not the entertainment value.” [dramatic pause] “Lucky for you my orders are clear. You’ll live to program another day.”

(To Artemis while being held at bow point) “I suppose now you bring me to justice. Let your new friends interrogate me. I wonder if your position is secure enough to survive me telling them everything I know.”

“Hey, where are your little sidekick friends ? They are always fun to play with. Especially Ar…chery girl.”

Red Arrow: “Take Sportsmaster, Cheshire is mine !”
Chesire: “Mmmm… so territorial and it’s only our third date.”

The events of Young Justice are canonical and take place on Earth-16 within the DC Universe. Any travel through the DC Multiverse could potentially bring the player characters into contact with this version of Cheshire.

Bonuses & Limitations:
Evasion is Melee Only, and she must be wielding her sai.

I gave Cheshire an 08 for her DEX and Martial Artist simply due to the way that she easily handles Aqualad and Red Arrow when fighting one on one. 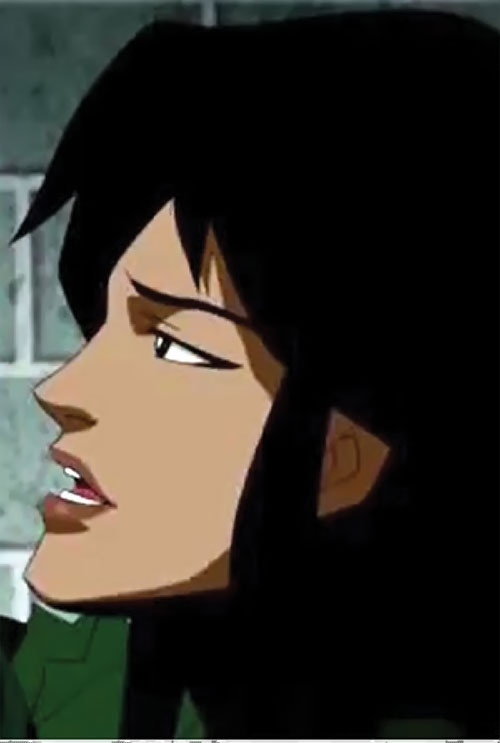 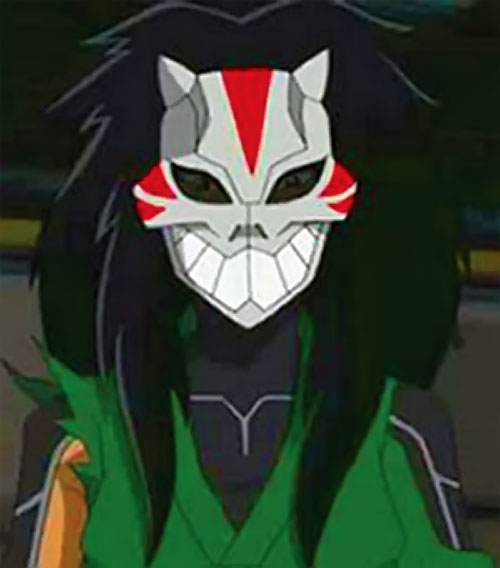