Childs was an evil British super-soldier. He appeared in Super-Soldiers, one of the semi-obscure comics produced by Marvel Comics UK during its brief 1990s revival.

For more context, we suggest that you read the Joseph Hauer character profile first.

Same abilities as Hauer. Including :

Major Childs served during the Falklands war in 1982. He was then a trooper or officer in the Parachute Regiment , and was well known for his bloodlust.

Childs crossed the line when he cold-bloodedly murdered bound and blindfolded Argentinean POWs. However, he stepped on a mine before he could be court-martialed, and went into a coma. From there, he entered the ECE corporation super-soldier program. Among his colleagues were Hauer and Dalton.

During a mission in Cambodia, Revenge snapped. He slaughtered a whole village and most of the other Super-Soldiers. His colleague Invincible (Joseph Hauer) seemingly killed him, then collapsed from his wounds.

Childs survived, was recovered, and was brought back to England for heavy treatment. During that time, the US super-soldier Nuke also went postal in the middle of Manhattan, where he was opposed by Daredevil (Matt Murdock) and Captain America (Steve Rogers). It was decided the Super-Soldiers project wouldn’t be revived.

Sir Marcus Grantby-Fox, the head of ECE, arranged for Childs to be physically healed and transferred to him. He had Childs implanted with control chips, and made him the head enforcer and wetworker for ECE.

When Hauer escaped from suspended animation, Sir Grantby-Fox knew Childs would be his best weapon to terminate him. After Hauer cleft through a roadblock by the Home Guard, Childs was sent with an heavily armored SAS team to kill Hauer, his companion the left-wing journalist Sarah Wilde and doctor Khan. The trio simply knew too much.

Childs left the SAS men to their own devices and underbriefed. He only wanted to headshoot Hauer. After he got too frustrated he even shot his own men dead to clear a bead to Hauer. The assault failed and Hauer escaped.

Sir Grantby-Fox escalated the ante. He had Peter-Henry Gyrich, an American official, send in a manipulated USAgent to kill Hauer in Cambodia. He then had Childs take command of another super-soldiers squad, the Welsh Super-Squaddies.

Their targets now were Hauer, Wilde and the last surviving super-soldier, Dalton (formerly “Dauntless”). Hauer and Wilde had freshly located Dalton in Cambodia.

Not exactly brothers in arms

Childs had orders not to interfere, and was considerably frustrated by this. He sent the inflexible Welsh Super-Squaddies into an all-out assault. But he took too long to change tactics when he saw that the USAgent and Dalton had joined Hauer.

Childs attempts to personally join the fray, but was incapacitated by Sir Grantby-Fox’s pain control implant – which he didn’t know about.

Hauer and his allies eventually stormed the ECE’s headquarter’s on Canary Wharf, London. Childs was unleashed at Hauer. They had a brutal and bloody fight, and Childs was defenestrated. He survived the fall but was almost immediately crushed by an incoming train.

Childs likes to kill. He enjoys the tremendous feeling of power he gets when he pulls the trigger or slits a throat. He enjoys war, random carnage, explosions and shooting people.

He feels very angry at anything that could possibly match his killing power. He becomes irrationally frustrated and violent when he cannot accomplish his fantasies about killing opponents he hates. If anybody gets in his way, even an ally, he’ll gleefully kill him.

His ability to handle frustration is rather close to zero.

“Nah, I’m not crazy. I just like killing people.”

Childs is a straightforward, simple villain with lotsa big guns. He can be reused in any plot that calls for such a killer of post-Tarantinesque proportions. 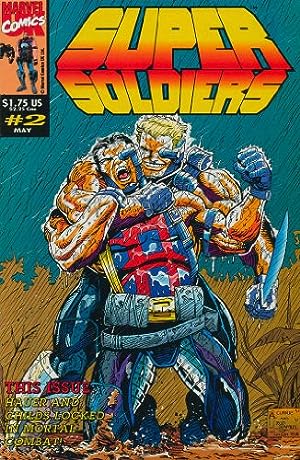 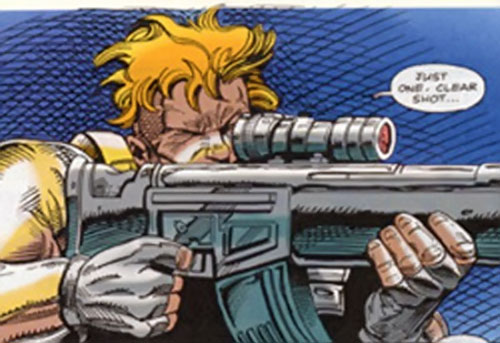