Chiller is a talented and highly trained assassin and mercenary. He seems to have conducted a large number of complex and daring hits. His chief asset, however, is his skin. It is both malleable and acidic.

Chiller can mould the strange tissues of his face to become similar in shape and colours to any other person. Maintaining a given visage takes concentration, but he can get around the issue by pulverising a special compound on his face. This chemical allows him to retain a likeness without having to concentrate on it.

Somehow, Chiller perfectly duplicates the voice of his targets. He cannot replicate clothing and accessories, though.

His body also changes as he moulds his face, for instance to match in skin tone. He doesn’t have to observe a person naked to somehow duplicate their body’s features. Chiller can duplicate faces and bodies of any gender.

While he was in the Slab, Chiller told the Joker he could keep his face and body morphed into the Joker’s likeness forever. He also imitated a number of famous people’s face without studying anything.

It is thus possible that he improved his control over what is described in this profile. Or perhaps it is tied to the fact that his skin’s corrosive secretions were greatly weakened at that point.

Chiller’s skin exudes a powerful acid. He can easily kill someone by forcefully remaining in skin-to-skin contact for a bit. Chiller’s costume is insulated against the acid, but his gloves allows him to expose his palms when needed.

Chiller employs unusually sophisticated technology, likely procured through The 1000. He does not seem to always have access to such neat toys, though. During the Intergang contract all he packed was a .45 handgun. Feel free to confiscate the teleporter, energy pistol and shock grenades (in that order) described in our game stats for any given appearance.

By the mid-1980s, Chiller already had a considerable rep as a deadly international hitman. His main employer was apparently the Metropolis-based conspiracy called The 1000. They considered him to be their top assassin but found him increasingly cocky and difficult to control.

In 1986, the Director of The 1000 sent Chiller on a very special mission. After killing and impersonating a Secret Service agent, Chiller took the wheel of the limousine carrying President Reagan  and Vice-President Bush . Demolishing the police escort with shock grenades, he put the pedal to the metal and managed to lose everyone, taking Reagan and Bush to an isolated farm well outside Metropolis.

The plan was to kill both men, disguise himself as Reagan, and pretend to be held hostage. Chiller would then wait for a bogus rescue mission led by a certain Senator Ballard. By rescuing “Reagan”, Ballard would become a national hero and be made VP to replace Bush. Soon “Reagan” would resign and Ballard would become POTUS.

However, just before Chiller could gun down his prisoners, he was attacked by Booster Gold, his robot assistant Skeets, and thre members of the Legion of Super-Heroes (long story). They repulsed Chiller and the helicopter gunships from The 1000 that came as reinforcement. Chiller teleported away.

The assassin was next seen when he and Shockwave were hired by major criminal syndicate Intergang. The job was to kidnap Catherine Grant in Metropolis. Grant would then be brainwashed to lie during the trial of Intergang boss Morgan Edge.

Again, the plan relied on Chiller’s abilities. Posing as Grant, he lured Gangbuster (Jose Delgado) into a trap, where Shockwave took Gangbuster down.

Chiller “disguised” himself as Delgado, who had been assigned to serve as a bodyguard to Grant. He then told Shockwave to dispose of Gangbuster, since he no longer needed to study Delgado’s features.

As Delgado, Chiller easily kidnapped Grant. However, Shockwave bungled the kill and the real Gangbuster survived. This allowed Superman and Batman to find the Intergang hideout where Chiller had taken Grant. Intergang had to cut its losses and let go of Edge. However it is unclear whether Chiller was arrested or managed to escape.

Faust had the right idea

Years later, Chiller joined numerous villains who assembled at the behest of the Hell-Lord Neron. They heard his pitch about gaining much greater power in exchange for their soul. Chiller and other assassins — Merlyn, Deadline, Bolt and Deadshot — made a special deal.

They sold their soul to each conduct a hit that would not fail. They all intended to leverage that unstoppable murder in a different way. Chiller was chiefly interested in worldwide infamy and in making his disfigured visage an object of fame and fear. 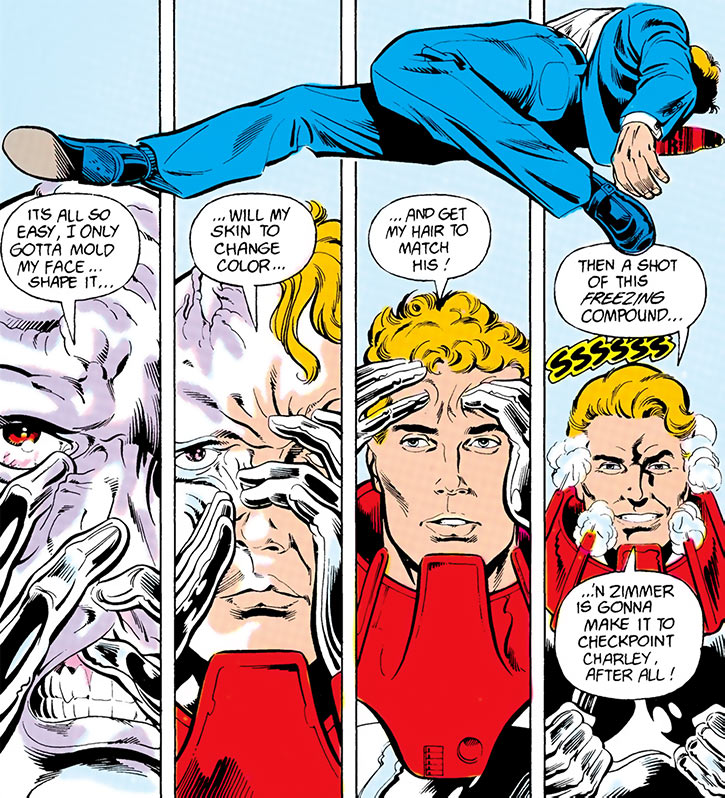 However, something went wrong for the self-proclaimed Killer Elite. Obsidian, then with Justice League America, foresaw all five hits. JLA operatives managed to reach each scene in time, apparently throwing a monkey wrench in the mystical support provided by Neron.

For instance, Chiller had planned to kill some generic blonde American pop super-star during a huge concert. He would do so while wearing his victim’s face and body. However, JLA associate the Yazz, who was acid-resistant, intercepted Chiller’s killing shot. The Yazz then spotted Chiller even he had assumed the likeness of another band member.

The furious Chiller, feeling betrayed by Neron, was arrested. It is, of course, possible that the ’unstoppable‘ hit they had been promised by Neron was just a lie.

Resurrection is a joke

Chiller either got free or managed to escape, and was soon working for an undisclosed syndicate. He associated again with Bolt to track down rival mercenaries the Body Doubles. These had just captured the highly valuable Resurrection Man.

The Body Doubles lured them into a trap and took them out with an explosion. Bolt presumably teleported himself and Chiller out – or vice versa.

Chiller was apparently arrested again and imprisoned in the high-security prison for superhumans, the Slab. There he was regularly injected with a chemical base to lower the potency of his skin’s acid. But he retained (or even increased) his shape-changing abilities.

The Joker, amused to see another villain with white skin, a propensity for using acid and a sick sense of humour and bravado, made Chiller his accomplice.

The plan that started with Chiller impersonating the Joker was ultimately successful. The inmates took over the prison in a particularly messy crisis. Chiller was still imprisoned in the Slab when Brother Blood and his cult invaded and took over, but likely was among those who seized the occasion to escape.

When he’s not on the job Chiller is a smoker, favouring the “Death Stix” brand.

An overconfident, fearless cowboy and psychokiller who loves his job. He sees himself as the capricious rock star of assassination. In his eyes Chiller is a supercompetent, unstoppable macho wonder boy of murder. 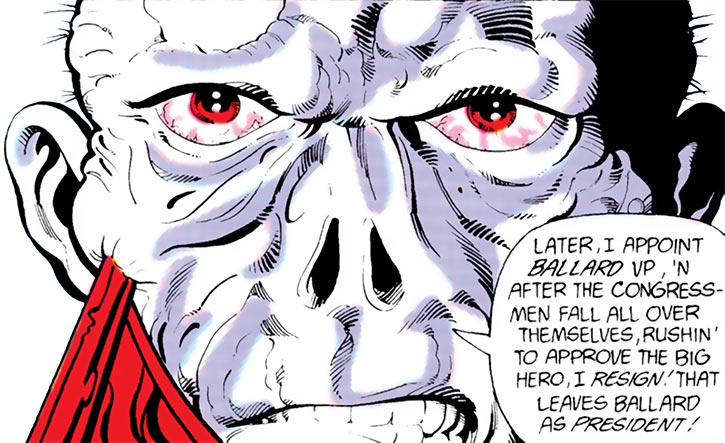 His temper is terrible and he’s a fairly casual killer, reasoning that it bolsters his rep in any case. What he craves is rep and fame.

Though he’s overconfident, his daring serves him pretty well. With it, he can pull fairly impressive stunts. He’s mentally quick on his feet, and he’s quite aware of how flexible and useful his impersonation power is.

Chiller has a sick sense of humour, bantering with people who know he’s going to kill them.

“Cool your jets, Director ! I’m the best hit man money can buy ! Your pigeons are tough marks — but I’ll take ’em out easy !”

“I never fail, boy… like this little demonstration will prove ! So when you meet the Devil face-to-face, tell ’im the Chiller sent ya ! Ha ha ha !” (SSSSTTT !)

“Did I mention that my skin leaches acid ? Kinda stings, huh ?”

Drawbacks:
Strange Appearance (worth but 5 pts given his Powers), Minor Rage. 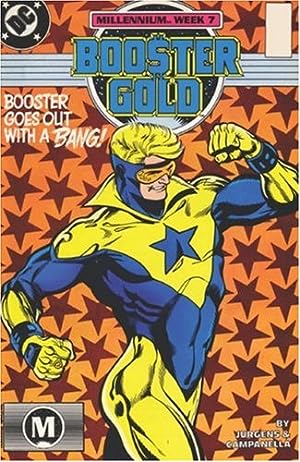 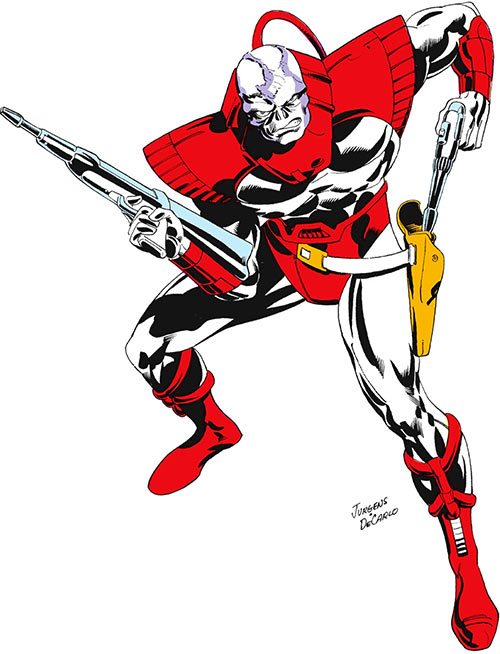 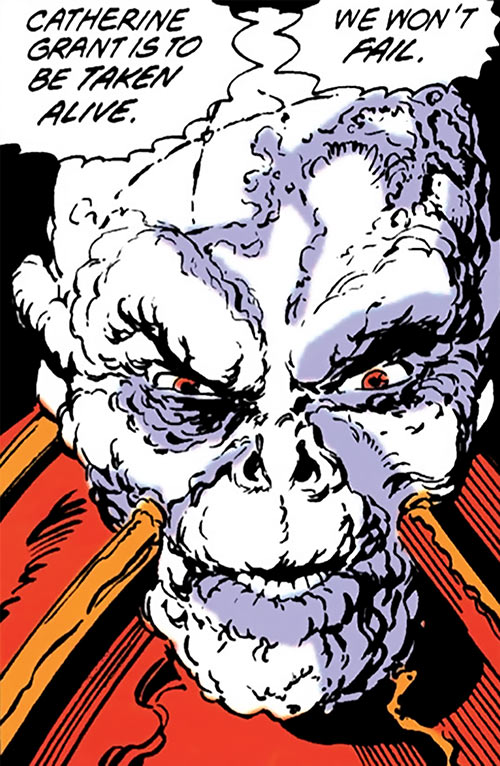 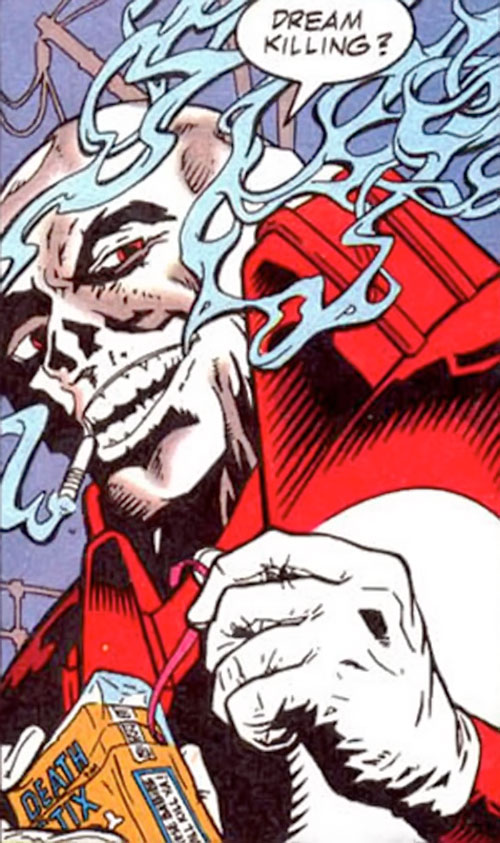