Choice has a variety of super-powers :

She can activate these at will, though mental conditioning means she’ll shout their name to do so. However, once her hour with that power is gone, she must wait two hours for it to be usable again.

Choice’s mind is full of blocks and directives deciding what she must, or cannot, do. These are a bit like Robocop’s directives. This conditioning is significantly eased by Hardcase’s presence. In hindsight, this is likely tied to the properties of his body’s molecules.

Choice’s origin is horrific, even to herself. She was originally Amy Tran Kwitny, a country girl in Việt Nam. Her village was destroyed during the war. Along with her grandmother, she emigrated to America in the late 1970s, one of the thousands of Amer-Asian children born during the war.

She never did find her American father, and ended up living in a squat as a teenager. Unbeknownst, to her she was involved in Mk-Ultra CIA drugs experiments .

Build your own super-heroine

Years later, the original Prototype appeared as a PR tool for the UltraTech corporation. The rival Choice Corporation decided to invest in their own corporate spokes-model. However, they wanted a super-heroine type. Choice’s CEO, Robert “Bob” Dixon, obtained the help of his friend J.D. Hunt, CEO of NuWare. Hunt had access to early wetware technology.

Bback then, the wetware tech was not powerful enough for the super-powers Dixon wanted. But in 1991, Choice struck a deal with the rogue government agency Aladdin. Aladdin had obtained the brain of Carlos “Forsa” Jimenez, a heroic member of the Squad, shortly after he had been killed by NM-E.

Dixon selected Kwitny. She had already been subjected to mind control, making her vulnerable. And she had the high needed level of nonthreatening attractiveness. Aladdin then stole the comatose body of another Squad member, Linda “Starburst” Warren. From there, a complex round of surgeries led to :

Kwitny was then brainwashed, and convinced she was a perfect employee of the Choice corporation. She was named Choice, her past was erased, safeguards were implanted in her powers, and her abilities were extensively tested. She then was released into the care of Bob Dixon.

Dixon used her not only as a corporate spokesmodel but also as a sex toy. This was probably inspired by his friend’s J.D. Hunt’s gynoid  Candy (later Electrocute).

Choice was used in a large marketing campaign for every Choice Corporation line of products, from cola to shampoo. She was not seriously presented as an ultra. However, the plan was to trigger some kind of crisis after the first year and have her solve it. The Choice Corporation would then reveal that Choice was a genuine ultra and her popularity would skyrocket.

However, Choice’s conditioning started lapsing. She hadd conflicting memories, her actual past in Việt Nam and US ghettos being mixed with Linda Warren’s average White childhood. She started refusing having demeaning sex with Dixon, as well as her role in commercials.

Now deemed a potential danger, Choice was shipped away to Brazil to be reconditioned at an isolated site. However, she escaped.

Guided by Linda Warren’s ghost feelings, Choice fled to Hardcase while hounded by Interceptors from Choice Corporation. Their efforts escalated as she got closer to L.A., resulting in the death of 15 innocents in Mexico. When she finally reached Hardcase, he fought off the remaining Interceptors.

The pair was attracted toward each other. However, Hardcase felt he would betray the comatose Linda Warren if he actually fell in love with another woman. Furthermore, the decent part of him realised that Choice was a frightened amnesiac, with whom any relationship could turn out to be abuse. Instead, he promised Choice he would help her to discover whom she really was.

Despite some delays as Hardcase wanted to manage his acting career, they did find out the truth. The duo fought Aladdin and then had Tech, from the Solution, hack into Aladdin’s databases. But by this point Choice and Hardcase where in love – albeit the role of Linda’s memories within Amy was inextricable.

Amy had barely overcome the shock about her true origins when she was mystically teleported to the Godwheel. Magicians there needed her as a champion against a rogue god. She ultimately managed to defeat this foe, but learned during that adventure she was pregnant from Hardcase.

Amy briefly met her lover on the Godwheel when he was teleported there. But Hardcase was then suddenly teleported back to Earth.

Choice looks mostly Eurasian, but her features have been significantly altered. For instance, her epicanthic folds were mostly erased.

Choice is a young woman who has been on the run for months, and whose mind has been deeply messed with. She has conflicting memories, cannot explain most of the things she does due to mental programming, and is quite lost. Although she’s quite courageous compared to ordinary people, she’s more a ultra victim than a ultra hero.

After meeting Hardcase, she started rebuilding herself. Hardcase was somebody she could talk to, and who matched with her memories from Linda Warren.

At first she was dependent on Hardcase and stayed close to him, always supporting him. After some months, she started to act on her own. Amy became much more resourceful when she was taken to the Godwheel.

As she grew into a fuller person she acted nice, helpful and was ready to risk her life to help even strangers.

“I need you…” (hesitation) “I need your help. Some people are after me.”

Choice is closely linked to Hardcase, since a part of her is Starburst. You could reuse the theme of the brainwashed, tailored super heroine created as a publicity stunt, however.

Alternatively, she could have travelled across dimensions  after long adventures on the Godwheel.

Drawbacks:
Enemy (Choice Corporation), SIA to shouting the names of the powers she activates (must beat her SIA to activate them silently), SIA to wearing the Choice costume (must be checked every hour), CIF of talking about her past and saying bad things about the Choice corporation (except to Hardcase), CIA to obeying the commands of Bob Dixon. 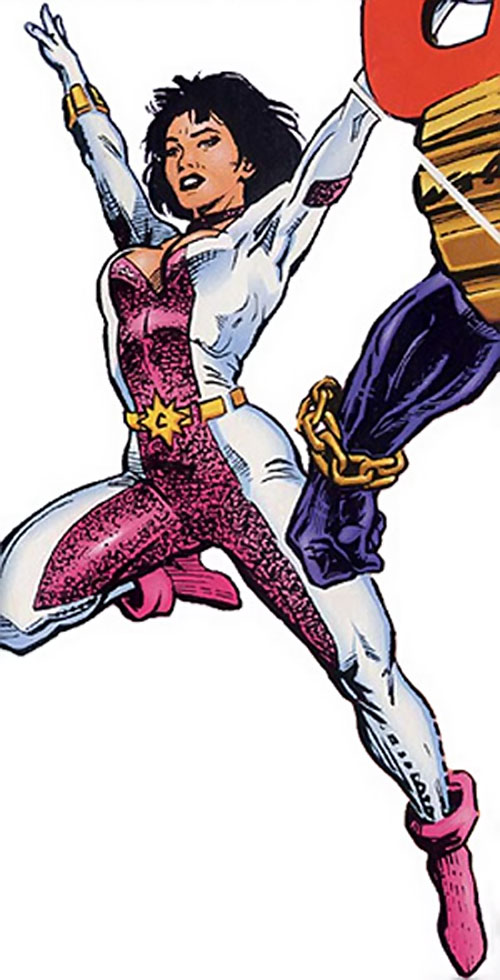