Jericho is a skilled hand-to-hand fighter. He uses a variety of martial arts and acrobatic techniques in fights. He is stronger than he appears.

He is insulting and loudmouthed while fighting. While he does not realize it, this gives him an advantage – his voice carries with it a mild hypnotic effect. That causes particularly weak-willed opponents to become so aggravated with him that they lose track of what they are doing. Which makes them less capable of avoiding physical attack.

Chris Jericho is the son of retired Canadian hockey star Ted Irvine. He was both a decent hockey player growing up, and semi-successful in local metal bands in Winnipeg during the 1980s. He recorded a well-received demo.

However, the course of his life changed in his late teens. He met some students of the “Hart Dungeon” training facility and became enamored with the idea of becoming an elite mercenary.

This training center, hidden beneath 1940s Canadian Olympian Stu Hart and run by his sons, was the same training facility that produced “The Crippler” Chris Benoit. It also helped in polishing the skills of “Dynamite Kid” Tom Billington.

The young Chris Irvine managed to talk his way into a spot in the school and found himself rooming with another young Canadian named Lance Evers. The two did quite well in their training and were often put together, both as a team and as sparring partners.

When they were ready (but still inexperienced), they were hired out to work for Hart family associates needing fighters in Mexico, Japan, and the U.S.. Irvine, dubbing himself “Lionheart” and Ever, calling himself “Lance Storm”, went by “The Thrillseekers”. They were moderately successful as enforcers and as bounty-hunters.

While Irvine was still in love with the lifestyle, he became more concerned with the kind of work he and Lance were doing. When he became a born again Christian, he made the final decision to leave criminal life and to use his talents to fight crime.

When their current assignment ended, Jericho ended his partnership with Storm (although the two remained friends). He returned to Japan to try his hand at being a “superhero” in the style of Jushin Thunder Liger.

He worked under a mask briefly as “Super Liger”, attempting to capitalize on Liger’s reputation and popularity. A quick beatdown and heart-to-heart discussion with Liger later and he abandoned that identity. Instead, he took the name “Chris Jericho.”

He went to the United States where he fought crime in Philadelphia for a few years.

He found himself at odds with “The Iceman” Dean Malenko over during Malenko’s years with Triple Threat. He aggravated the stern and serious Malenko by calling him “Stinko Malenko” and claiming that “while Stinko Malenko is the Man of 1000 holds, I know 1004 holds.”

During the year 2000, Jericho began calling himself Y2J as a means of self-promotion. But he dropped it once the year changed to 2001. He still fights crime, but has settled down somewhat and lives in New York with his new wife.

He moonlights under the pseudonym “Mongoose McQueen” as lead singer for the heavy metal band, “Fozzy Ozborne.”

Jericho is average height, with an athletic but not particularly noteworthy build.

He has long blond hair that he wears in a variety of styles (many of which are intentionally silly, in a show of contempt for his opponents. He changes his facial hair from week to week.

Jericho is egotistical and insulting in a comedic manner. He thinks that his enemies stop short at his insults and taunts due to his overwhelming wit… uh…no ! He’s charming and funny, but his routines are essentially cheap stand-up comedy.

When dealing with people in his personal life, he tries to tone down his attitude. He attempts to follow his religious beliefs while remaining conscious of the possibility of coming off sounding like a hypocrite.

“You two may be assclowns, but you’re the two toughest assclowns I’ve ever faced.”

Jericho serves well as a regional vigilante hero, in the mold of El Diablo or The Question, but certainly more light-hearted.

Bonuses and Limitations:
Broadcast Empath causes Anger Only and can only be used as a Poly-Attack while using Shouting.

By Andrew Lee and Jessie Davis. 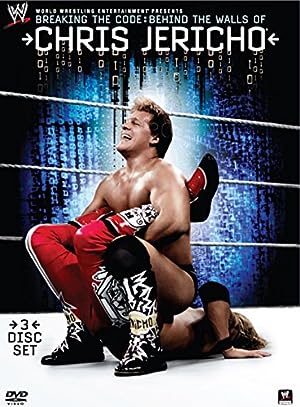 Breaking the Code: Behind the Walls of Chris Jericho 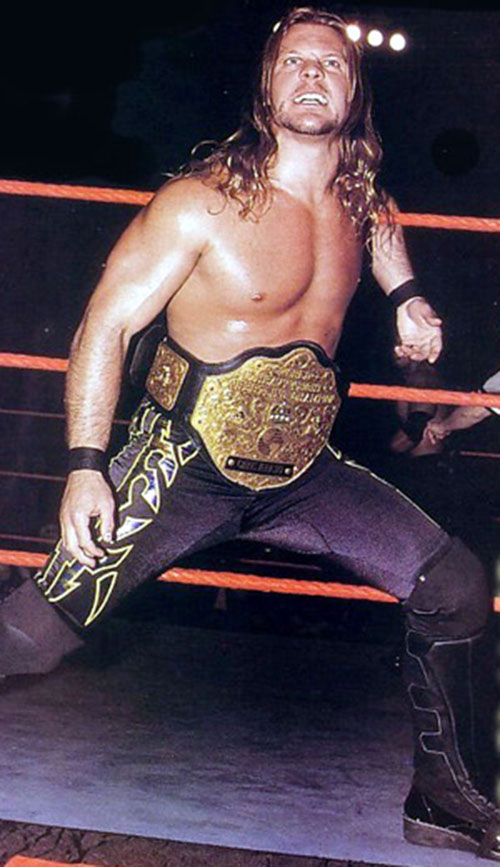 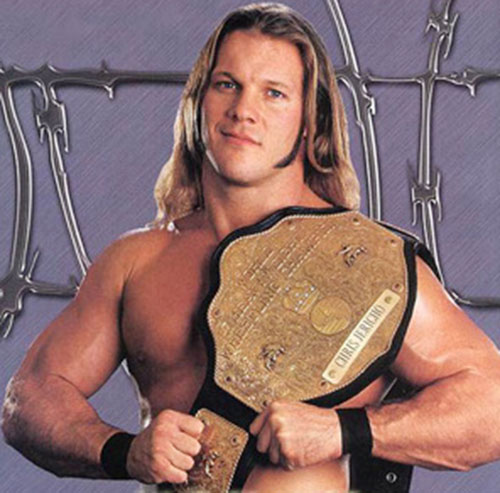