St. Clair is a highly skilled Interpol agent – making her both an able detective and an excellent, steady gunwoman.

Like in many other stories, the DC Universe’s version of Interpol has field agents of its own. It’s not simply a coordination and clearing house agency for disparate police forces. While I would assume that this organic force of armed detectives is small, it apparently works on global crimes and conspiracies that impact numerous countries.

As part of this work, Swiss detective Christine St. Clair unearthed the truth about Manhunter (Paul Kirk). She pieced together :

Who hunts the Manhunter ?

Thanks to her father — a banker of considerably influence in Switzerland — she was notified when Manhunter came to empty a large Swiss account that belonged to the Council. St. Clair also learned that he clashed with attackers trying to stop him.

With this lead, St. Clair doggedly pursued Manhunter. But the machinations of the Council made that difficult. In particular the bodies of the clones sent against Manhunter kept disappearing from the morgues as Council cleaners erased evidence.

The Interpol agent nevertheless found her quarry in Tibet. Manhunter was seriously wounded and unable to move after a series of fights against clones of himself. St. Clair defended Manhunter against further attackers as he told her his story.

However, St. Clair’s boss was actually a Council agent. When she established contact with Manhunter she became too dangerous to live. Thankfully, Manhunter killed St. Clair’s boss. Yet, Christine and Kirk soon became wanted for this murder.

At this point the former Interpol agent had little choice but to ally with Manhunter. They managed to acquire a tape with crucial information about the Council. But it was then Christine’s father who revealed himself to be a Council agent whilst attempting to repossess the tape.

His daughter shamed him, accusing him of betraying all the values he had taught her and had led her to become a police detective. Remorseful, Mr. St. Clair agreed to let her keep the tape and left. However, he was then murdered by waiting Council enforcers.

After this tragedy, Ms. St. Clair used the tape to convince the brainwashed ninja master Asano Nitobe to ally with her and Manhunter. Nitobe was a precious ally in their war against the Council. Determined to see this to the bitter end, Christine was part of the ad hoc team Manhunter assembled to storm the headquarters of the Council – a force that included Batman.

The strike was successful when Kirk sacrificed himself to detonate a massive quantity of explosive. That apparently put an end to the Council.

Send in the clones

Over the following years, St. Clair wrote a book about Manhunter (Paul Kirk) and the Council, titled The Mask of the Manhunter. Whether she resumed working as a detective is unrevealed. The familial wealth, and perhaps the sales from the book, made it unnecessary. It is also possible she had to handle some of the responsibilities of her late father.

She further honoured the memory of her friend Paul in another manner. Christine and Asano kept a watch for resurfacing clones of Paul Kirk, tracked them down and eliminated them. At least one such job took place in Gotham, where she again allied with Batman.

In the early 2000s, a man who likely was the last clone left became a member of the Power Company, a “consulting” group of superhumans. Christine and Asano took him down. Yet he more or less convinced them that he was also working to honour the memory of the original Manhunter.

Unsure that killing this clone was ethically defensible, they let him go. But this left St. Clair angry and she swore to keep a close eye on him.

St. Clair is a well-educated, serious detective with good willpower and nerve. She’s a regular Girl Scout with lofty principles and a strong belief in law and justice. She is also an action heroine.

While the story did not leave much room for characterisation, it was unusual for its day in casting her as a self-sufficient and well-trained fighter and detective. Furthermore, the hint of romantic tension was kept as a hint.

Nowadays, Christine prefers sniper tactics. She’ll cover Nitobe from afar. If Nitobe has troubles with his opponent(s), he’ll simply manoeuvre to give Christine clear shots at the enemy.

She greatly admired Paul Kirk, and will consider any stain on his memory a personal insult. 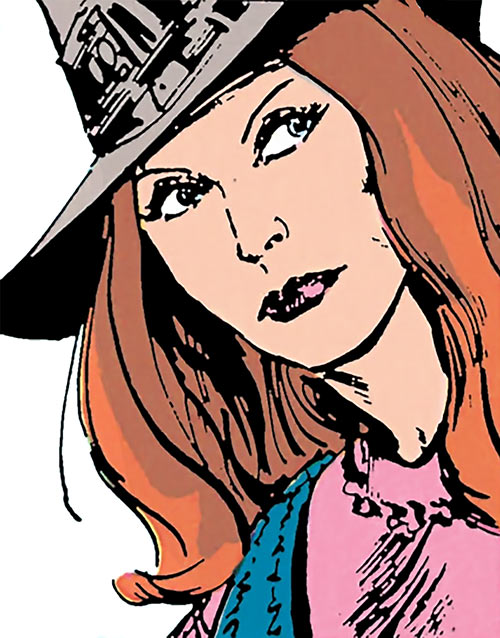 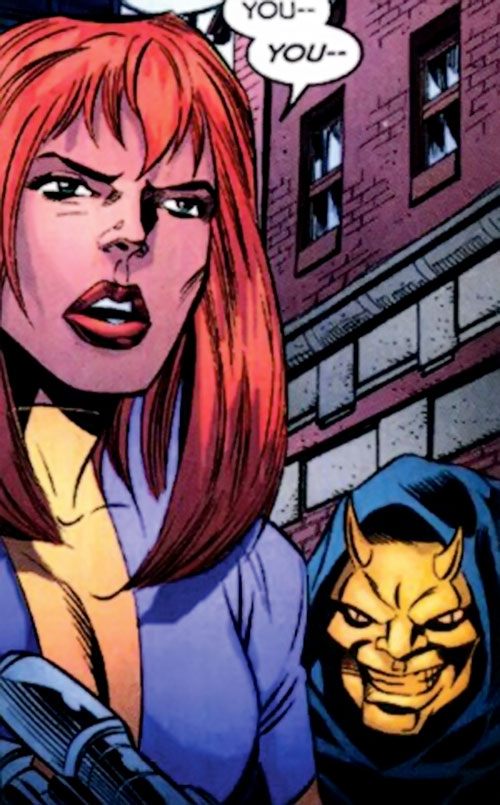 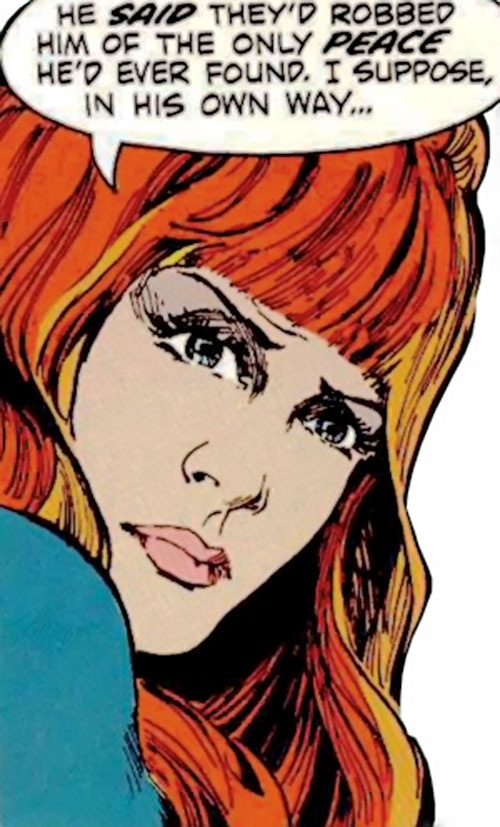 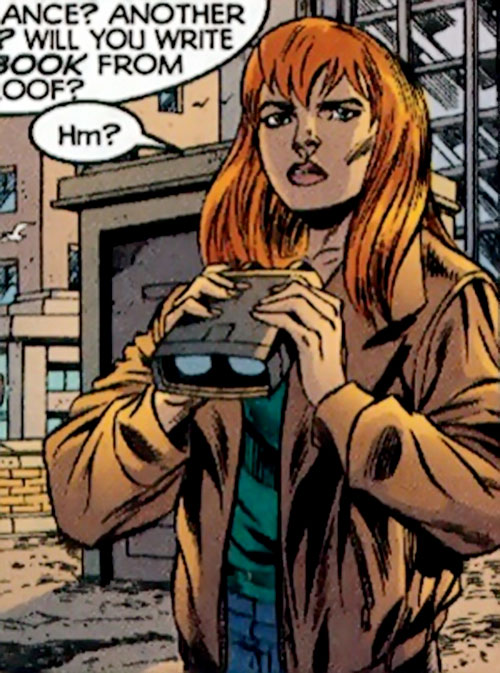